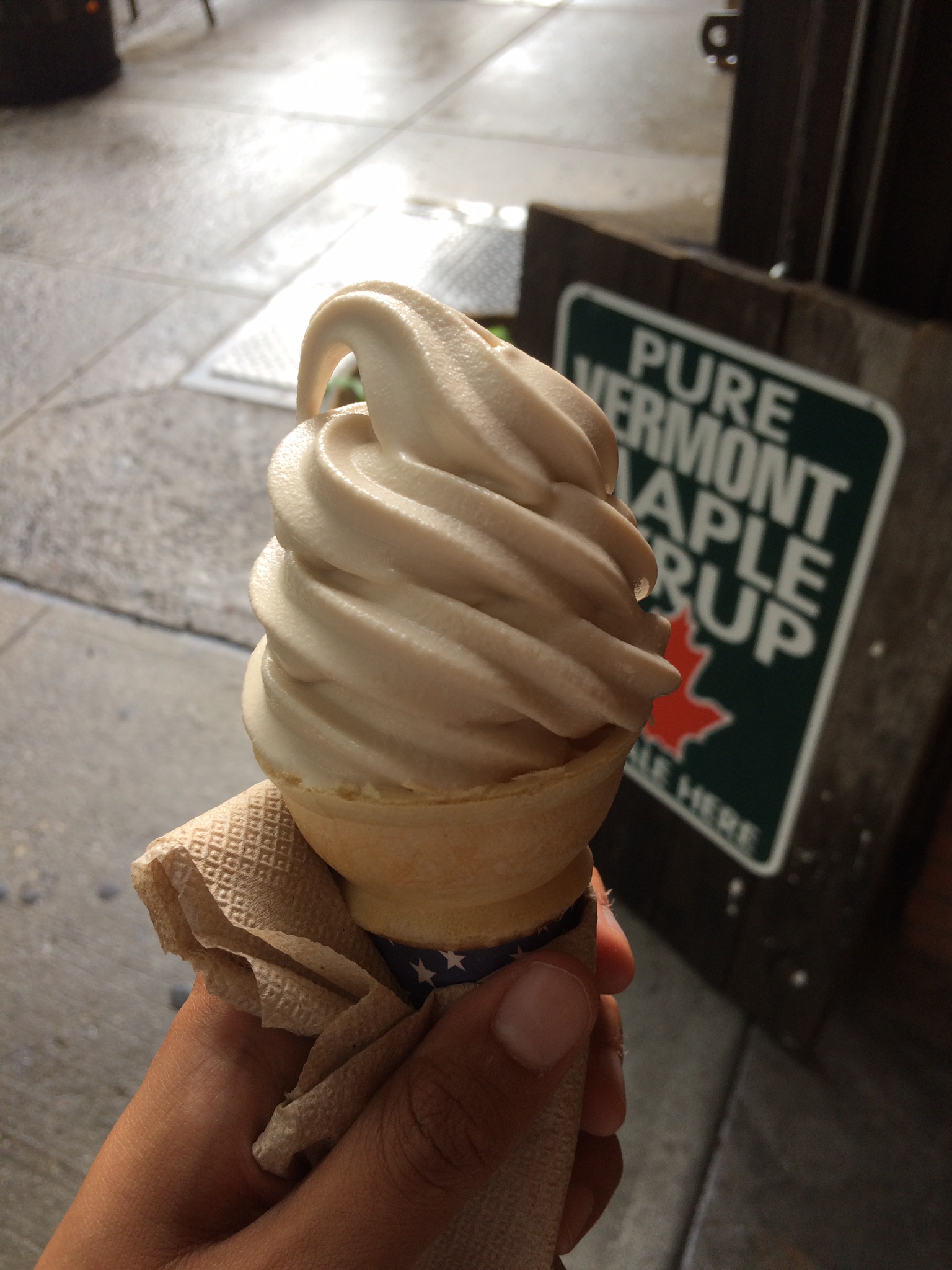 The maple creemee at Corner of Vermont has a higher milk fat content than your standard soft serve. Photo: Elaheh Nozari

I discovered Corner of Vermont, a tiny lunch counter tucked into Park Slope’s 5th Avenue, in an unremarkable way: I read about it in the New York Times. Florence Fabricant mentioned its Vermont-style soft-serve ice cream in her weekly Front Burner column, and since I pride myself on an encyclopedic knowledge of the New York frozen dairy scene, I had to find out how the so-called creemees tasted immediately. So began a series of visits to this epicurean specialist of all things Green Mountain.

It’s hard to define Corner of Vermont, which will be celebrating its one-year anniversary in November, without seeing it for yourself. While Fabricant identified it first and foremost by its soft-serve, the restaurant’s Facebook page classifies itself as a hot dog joint, yet some might say it’s more of a soda fountain (the proof is in the egg cream, which is decidedly more 212 than 802). It also serves breakfast all day. Basically, anything that Vermont is known for (dairy, maple) has a spot on the menu, which, not including the breakfast offerings, can be split into three main categories: hot dogs (with made-in-Vermont franks from Black Watch Farm), grilled cheese (made with either Grafton or Cabot cheddar), and ice cream, whether that’s soft-serve or a milkshake. 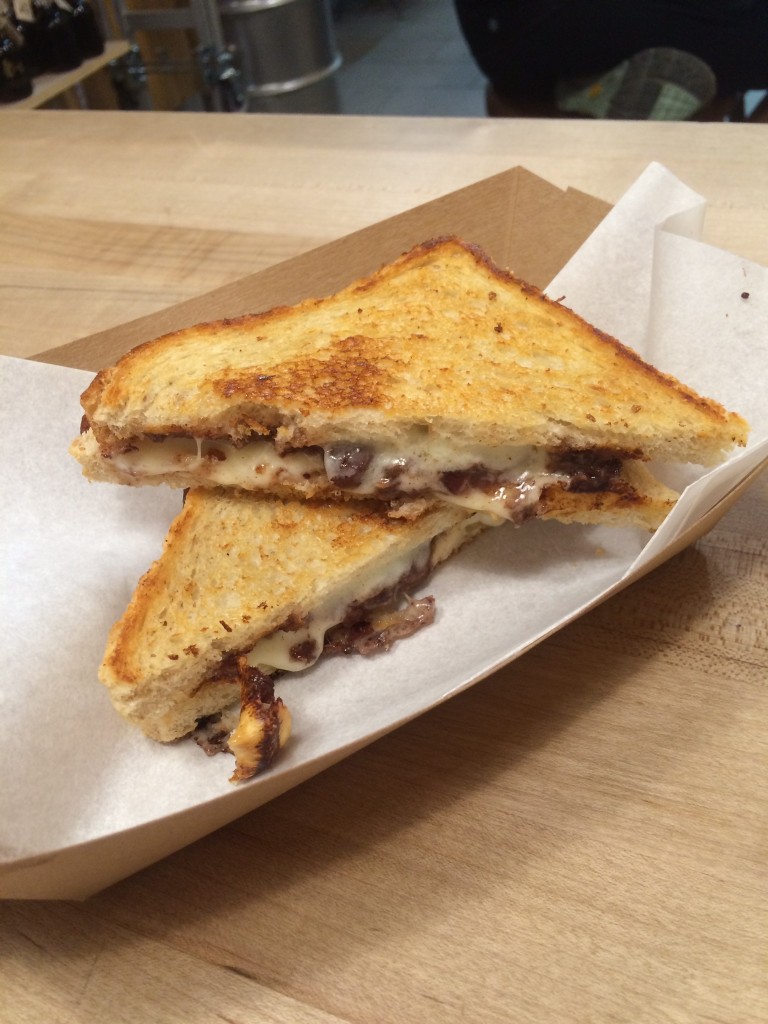 Though ice cream was my intention, the timing of my first visit (noon on a weekday), combined with the enticing greasy spoon aroma of frying butter warranted that I consider something more savory. Deciding on grilled cheese didn’t narrow down my choices by much—there are six different versions on the menu, ranging from a classic Cabot cheddar on sourdough ($5.25) to the more complex Smokehouse–cold-smoked cheddar with maple caramelized onions and bacon ($10). I settled on cheddar melted with cranberry and orange chutney ($5.25). To say it was good would be an understatement. It passed my test of what makes a restaurant grilled cheese worth ordering: Could I make a better one at home? No! For one, the bread was evenly buttered and grilled to a golden brown that I’m incapable of achieving in my own kitchen, and the cheese was melted in all the right places. The chutney, flavored with allspice, nutmeg, cinnamon, ginger, sugar and apple cider vinegar, had a sweet and tangy flavor that meshed well the sharpness of the cheddar. I’ve never had a pumpkin spice latte, but I now understand why fall spice is such a cult-y obsession.

As for the ice cream, you might wonder, as I did, what differentiates a Vermont creemee from the swirls doled out from any old truck–the answer is milk fat. The soft-serve most of us know in New York is made with anywhere from 2% to 6% milk fat, but Corner of Vermont’s creemee is made with 10% milk fat, which according to USDA standards, technically makes it ice cream. There are two flavors to choose from: vanilla and maple. I ordered the latter in a wafer cone ($3.25), and it didn’t disappoint. It tasted of real maple syrup and didn’t have that overbearing artificial flavoring of mainstream soft-serve, nor did it melt too fast.

The creemee is certainly solid competition for the bigger names in New York ice cream, and even though it was what drew me there in the first place, I’d come back for breakfast or lunch instead. There aren’t any specials per se, but the kitchen will occasionally add mac and cheese or a BLT to its repertoire (as for more comfort food staples, beef chili is always available). Plus, with fall coming, I was told they’d be expecting a shipment of apples in the next few weeks that they would be working into the menu. You can also order a maple cotton candy. 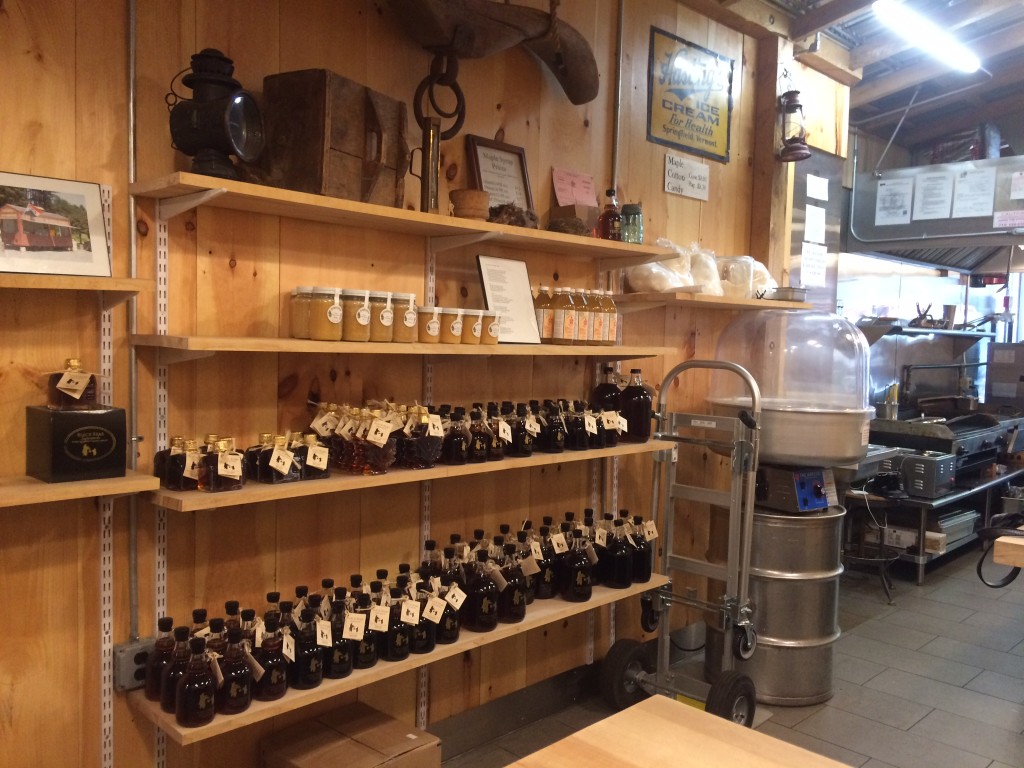 In addition to lunch, you can purchase Vermont-made products like maple syrup, cider vinegar and honey. Photo: Elaheh Nozari

The menu isn’t just inspired by the motherland, it heavily features products from family-owned Vermont farms. Even the coffee on menu is from Mocha Joe’s, a café and roastery in Brattleboro, Vermont, and a local staple for caffeination. There’s a shelf of goods for sale including maple syrup, sugar and candy, apple cider vinegar, and raw honey. The space is small and utilitarian with wooden walls, two high-top tables, and a large griddle up front. Whether you want to stay or go, everything is served in a camp-style cardboard box, which can be conveniently eaten on the benches outside on the sidewalk.

Perhaps there’s no better time to pay a visit than in these transitional weeks between summer and fall when the lurking chill of sweater weather makes anything maple-flavored more appealing. I’m definitely planning a date with the French toast–mostly for the maple butter and syrup topping.