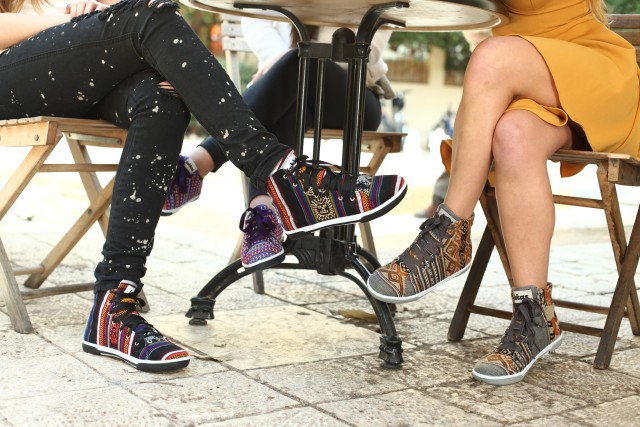 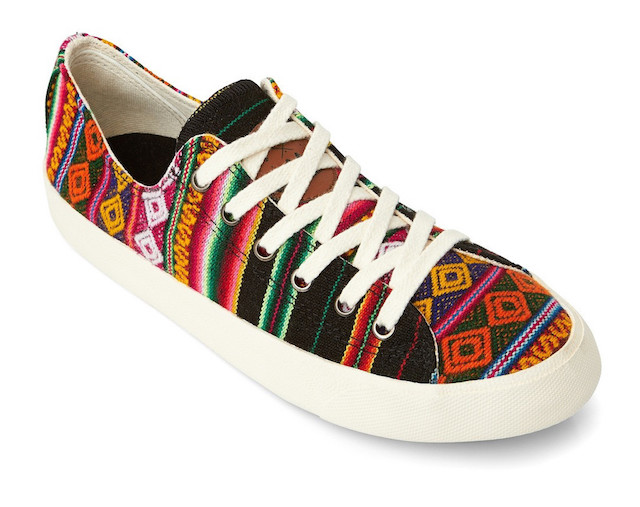 The black spectrum low top, which was originally introduced when Inkkas first launched in 2012, is made with handmade fabrics by Peruvian artisans and cut, sewn and stitched by hand in Mexico. Image: Inkkas

The notion that you can buy trendy shoes for yourself, and give an impoverished child on the other side of the world the same gift is a now a familiar one thanks to Toms, the brand that pioneered a kinder form of capitalism known as conscious consumerism.

But if Toms took a six-month backpacking trip in the places where it provides free shoes, and stopped at every outdoor market in search of the wildest gifts to take home, they would look something like Inkkas. Which is basically how these colorful sneakers with a similarly charitable business plan came to be. Inkkas co-founder Dan Ben-Nun, who splits his time between Brooklyn and traveling the world, was on a South American adventure through Peru and Bolivia when he saw local artisans using Andean textiles in their shoes. He had a hunch he’d find fans if he incorporated these brightly colored fabrics into a Converse-like sneaker, and he was spot on. The company, whose Greenpoint showroom is holding its grand opening this Saturday, has been making its handmade kicks since 2012, and now sells a broad selection of boots, chukkas, huaraches, and bags made from designs and hand-made textiles hailing from Peru, Ghana, Guatemala, Japan and beyond.

The shoes are produced with the same one-for-one philosophy common to brands like Toms and Warby Parker, only in Inkkas’ case, a tree is planted for every pair purchased to rehabilitate eroded farmland and mismanaged forests around the world through its partner, Trees for the Future. (According to Ben-Nun, Inkkas sales have spurred the planting of 76,000 trees since 2013.) And Inkkas employees in Mexico, who hand-stitch the shoes, are also paid higher than the average national salary.

To make things even more sustainable and efficient, Inkkas relies on crowdfunding to determine which new styles should go into production. If enough people place advance orders on a desired shoe, like the 2016 Zebra Zip Top, the full line goes into production. By crowdfunding select styles, said Talia Shulze, who heads up Inkkas’ marketing and communications, “it helps us figure out who we can please most, so we can manufacture shoes people want…so that we don’t wind up with overstock.” It’s also around $10 cheaper to pre-order a shoe through their crowdfunding campaigns.

There have been some kinks in the production process. While some previous styles have run small, a number of this year’s styles run so large that the site directs people to order a size down. “We get a lot of calls and emails about sizing,” said Shulze.

I didn’t experience any issues with my Inkkas high tops (and I ordered a size up). And while it’s nice to know they’re made in a way that isn’t exploitative, and that the natural world may benefit from my purchase, what I like about them is that they feel more comfortable and substantial than your typical canvas sneaker, and they look good.

Their backstory doesn’t hurt, either. These are currently the only pair of shoes I own that blends Peruvian fabrics with muted colors inspired by “experiencing an art festival in Hackney Wick” in London. My shoes are basically more well-traveled than me, which, I admit, is appealing.

“When you buy Inkkas you are buying into the love of traveling,” said Ben-Nun. “And there is no better way to travel than in your Inkkas.”

The Inkkas showroom at 77 Franklin St., which will be open to the public every Saturday and Sunday, holds its grand opening this Saturday, Sept. 26 from 3-7pm with special discounts, raffles and giveaways. RSVP here.

Leave a Reply to Caden Dahl