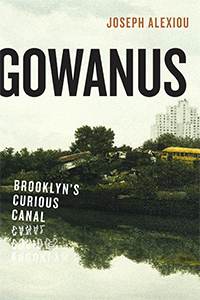 “Everybody thinks they’re discovering something,” notes Alison Price, director of the documentary Lavender Lake in Joseph Alexiou’s new history, Gowanus: Brooklyn’s Curious Canal. Price is referring to the artists who made Gowanus home in the late 1990s, but her comments about New Yorkers’ fascination with the canal, as Alexiou’s trenchant, meticulously researched biography of the Gowanus shows, has been around for centuries.

Alexiou takes us all the way back to when the canal was a small, clean tidal estuary. The filthiness that the canal is perhaps best known for is a result of industrial pollution from the boats and factories that depended on the waterway for their livelihoods, as well as a combined sewer system that allows (still!) both excess rainwater and raw sewage to drain into it. As for the sense of discovery, before there was Whole Foods and a Superfund designation, before there were condo towers, there were Gilded Age barons like real estate developers Daniel Richards and Edwin Litchfield, who wanted to both expand and clean the canal. First, Richards developed Red Hook, then he set his sights north, intending to expand Brooklyn’s shipping potential and economic growth with the help of the canal.

Richards worked with various engineers to help the canal accommodate bigger ships and barges, to construct warehouses, and to alleviate foul smells and pollution, but the only plan that would have actually accomplished the latter was dismissed as too expensive. It was Edwin Litchfield, another developer, who would succeed in turning the creek into the canal, but while a variety of industries thrived in the wake of the expansion, the canal only became more polluted. The book provides countless examples of how elected officials and businesses alike refused to implement infrastructure improvements and manufacturing regulations that might reduce the pollution.

Since the people living closest to the canal were some of New York’s poorest, politicians didn’t feel compelled, according to Alexiou, to spend the necessary money, especially not once the decline of manufacturing after World War II made the blocks around the canal feel sleepy enough for the artists Alison Price described in Lavender Lake to feel as if they had found uncharted territory.

Sometimes the book’s level of detail feels excessive, like the various sections covering colonial settlers’ purchase of various parts of Brooklyn, and the role the canal played in the Battle of Brooklyn during the Revolutionary War. It’s fascinating that this much-maligned, polluted waterway was the “Unsung hero of the Battle of Brooklyn,” but the detours into strategy and battle tactics feels like padding.

The book shines most when Alexiou makes wry observations about history repeating itself. That’s when the extensive details help readers understand just how long the Gowanus been polluted, how it’s remained that way for so long, how many people think they’ve discovered the canal, and why they wanted to make it the key to economic success for Brooklyn. Everything old really is new again, at least on the banks of the Gowanus.