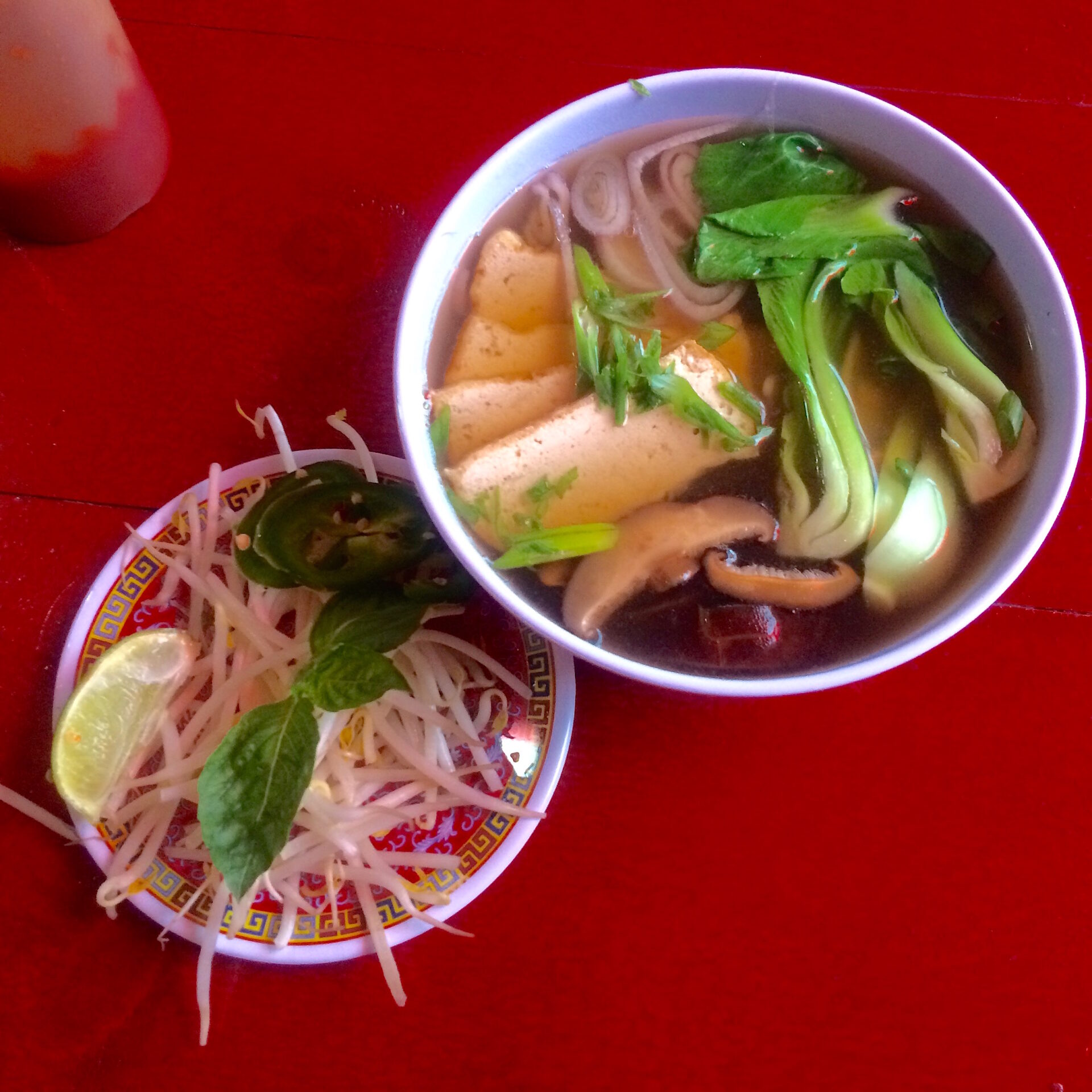 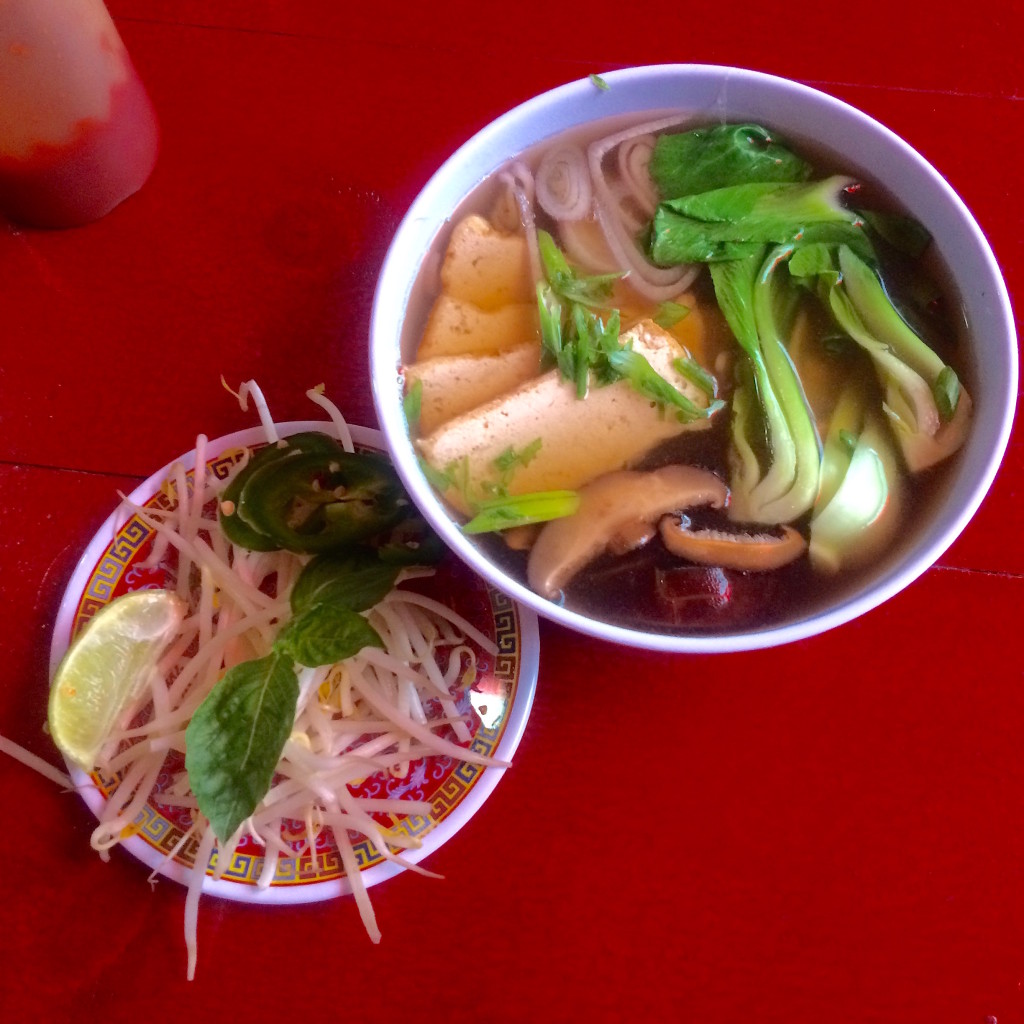 Vegetarian pho that is as rich and delicious as the beef variety, thanks to loads of aromatics. Photo: Elaheh Nozari

It doesn’t take more than a scroll through Seamless to realize that pho, a Vietnamese noodle soup traditionally served at breakfast, is just as ubiquitous in New York as ramen, it’s just not as trendy. This oversight has less to do with the inherent deliciousness of pho than the level of fame behind the chefs who make it. The best bowls of pho in New York have traditionally been found at nondescript restaurants with laminated menus, and Lucy’s Vietnamese Kitchen in Bushwick carries on this tradition–with a few upgrades.

Located in a hole-in-the-wall space on a block off of Myrtle Avenue, Lucy’s opened in March and specializes in both dishes that Vietnamese cuisine is known for in New York: pho and banh mi. The four-dish menu, written on a chalkboard, is focused and inexpensive (prices range between $8 and $12). Aside from pho noodle soup, there are three types of banh mi sandwiches served on crusty baguettes: the pho banh mi made with 16-hour smoked brisket sautéed in pho broth and topped with hoisin sauce, sriracha, and Thai basil, as well as chicken and lemongrass options, both less complicated and sautéed in house-made lemongrass sauce. I had my heart set on pho though, made with their vegetarian broth and a choice of tofu, brisket, or chicken.

Outside of the comfort food factor, one of the reasons I like pho is because it’s simple. I like a clear broth that turns murky only when I pollute it with hoisin sauce, a tendency that probably isn’t traditional, but that I do anyway. Whereas ramen is too rich and salty to eat every night, pho is soothing. The tofu pho at Lucy’s was exactly that. Vegetarian broth sometimes lacks the flavor of a more traditional beef-based broth (which they do not serve), but Lucy’s makes up for the flavor that usually comes from roasted bones with its spice blend. Their vegetarian broth is simmered with mushrooms, star anise, cinnamon, shallots and ginger, an aromatic flavoring that I smelled, and tasted, immediately. Tofu, shiitake mushrooms, bok choy, and onions were perfectly aligned on top of a sizeable portion of rice noodles waiting to be stirred up from the bottom of the bowl. I swear the pho at Lucy’s was one of the more memorable ones I’ve had in New York, and not because I was intently analyzing it for the sake of writing about it.

The ambience at Lucy’s is just as cozy as the food. The owner, who lives down the block, has covered the walls with framed family photographs so that the restaurant resembles an extension of his home. The seating area consists only of a bright red 10-seat communal table, but the space doesn’t feel cramped because the operation is conducive to takeout (they also offer free delivery within a mile radius). Plus, there’s a loyalty card that promises one free dish after ordering 10, which is incentive enough to become a repeat customer. When I was there, save for one other pho slurper, most customers were popping in to get a sandwich to go. As such, the crowd is made up of Bushwick locals who fall into the under-30, mostly male, hipster demographic.

So whether you call Bushwick home or you’re in search of a good bowl of pho in New York as the days get colder and darker, or you’re thrilled that there is finally a vegetarian pho option that actually tastes good, stop by Lucy’s. But beware: it’s cash-only.