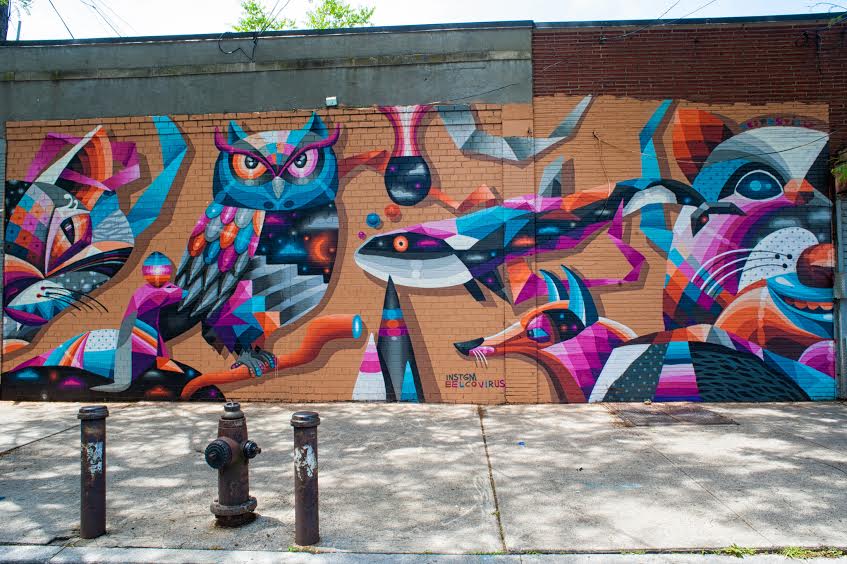 Where others in Brownsville, Brooklyn saw shuttered storefronts, N Carlos Jay, an artist with roots in the neighborhood, saw blank canvases with the potential to engage and uplift the community.

The Writing on the Walls Art District, off Belmont Avenue between Mother Gaston Boulevard and Rockaway Avenue, is the culmination of Jay’s vision. Twelve vibrant murals, painted by notable street artists and financed with a crowdfunding campaign, stake a visual claim on a neighborhood that, despite being long-maligned and underserved, has recently become a new frontier for gentrification.

As heralded by a New York Magazine cover story early in 2015, Brownsville and neighboring East New York are some of the final frontiers of gentrification in New York City. Mayor Bill de Blasio’s plan to build new affordable housing in the area is almost certainly helping to fuel a speculative rush by real estate developers to get in on the next, last hot neighborhood in Brooklyn. “What they did to Bed-Stuy, they want to do to East New York and Brownsville,” says Jay. His goal in reaching out to the neighborhood through art was to remind residents that beauty exists everywhere and to foster a sense of local ownership through creative expression. “It’s our job to make sure your voice is heard before you don’t even have a voice,” he says.

As a Brownsville native and an artist who works in a variety of media, Jay was able to gather a group of internationally renowned and emerging street artists including Ben Angotti, Lexi Bella, Joel Artista, Zeso, WERC, El Nino de las Pinturas, Fumero, Teo Doro, Welin, and Phetus to complete the first 12 murals in summer of 2015. Now Jay is raising money through a GoFundMe campaign for another 10.

The artists were given few restrictions, only that the murals and their messages stay positive, something that children in the neighborhood could look to for inspiration. 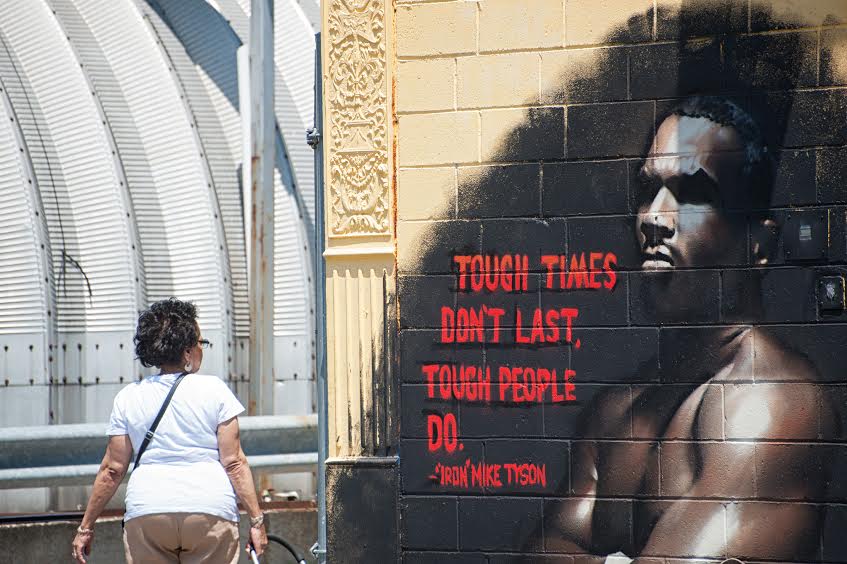 The resulting murals range widely in subject matter and style. Some reference local heroes. In Ben Angotti’s portrait of Mike Tyson, the boxer stands defiant against a black backdrop, staring intently into the distance. The portrait is accompanied by Tyson’s quote, “Tough times don’t last. Tough people do.” This mural is something of a departure from the artist’s normal style. “It is a little tighter and more restrained than my average work,” Angotti said in an email. “I wanted it to be a bold transparent statement.”

In Jay’s own mural, a man picks himself up off the ground, against a fiery backdrop of yellows, reds, and oranges. The title reads, “Stand up Brownsville.” Nearby, Eelco, a well-known Dutch street artist, painted an owl and a cat in bright blues, pinks and oranges, composed of shapes that make them look almost cubist. In a nod to future generations, BK Foxx’s backpack-toting artist-in-training wears a Nets hat and plaid shirt; spray paint in hand, he touches up the multicolored caption that reads, “Brownsville BK.” In Lexi Bella’s piece, a young black woman blows a giant pink bubble above the message, “Black girls matter.” 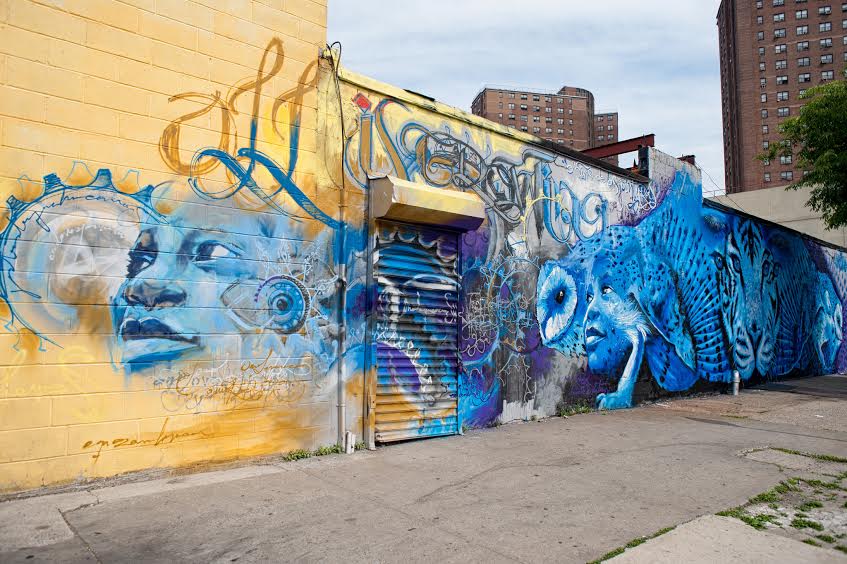 Werc’s mural (which includes contributions from El Niño de las Pinturas) begins on one side as a young boy, watched over by an owl and a tiger, and continues his journey to adulthood. “The mural is meant to depict the journey from childhood to manhood and the courage it takes to be strong on your path, and to not forget that there’s always wise guides looking out for you throughout your journey,” he explained in an email.

The painting process for all of these pieces provided an opportunity for conversation, as well as for reflection. Werc marveled at how “the kids that walked by told their parents they wanted to be artists or take part in the mural. One girl who rode around in her bicycle sat and watched the painting process for hours at a time and day by day.” 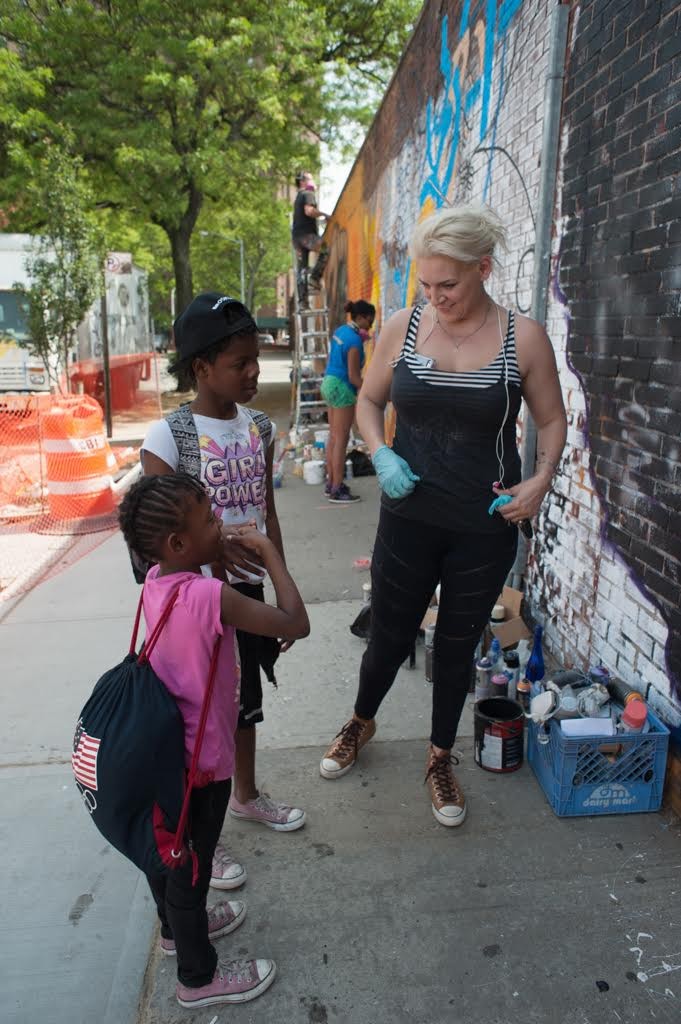 Seeing a Brownsville native creating these murals, Jay observed, helps kids realize that art doesn’t have to removed and inaccessible, even in a neighborhood with Brownsville’s reputation. “For the last two decades, it’s been considered a bad place to be, the murder capital of New York,” he says. As an artist, Jay found profound value in the conversations he had with children in the neighborhood. “[they were] the best conversations about my art and art in general,” he says. “Kids know.” The murals not only add beauty to everyday life, acting as a reminder that art is for everyone, they also honor committed residents who are working to bring investment and resources to the community. “People [in Brownsville] are resistant to change, even if it’s good change,” he says. “But if they see that you’re one of them, there’s less pushback.”

Writing on the Walls is currently running a GoFundMe campaign to raise $10,000 to cover the cost of creating 10 additional murals in Brownsville.