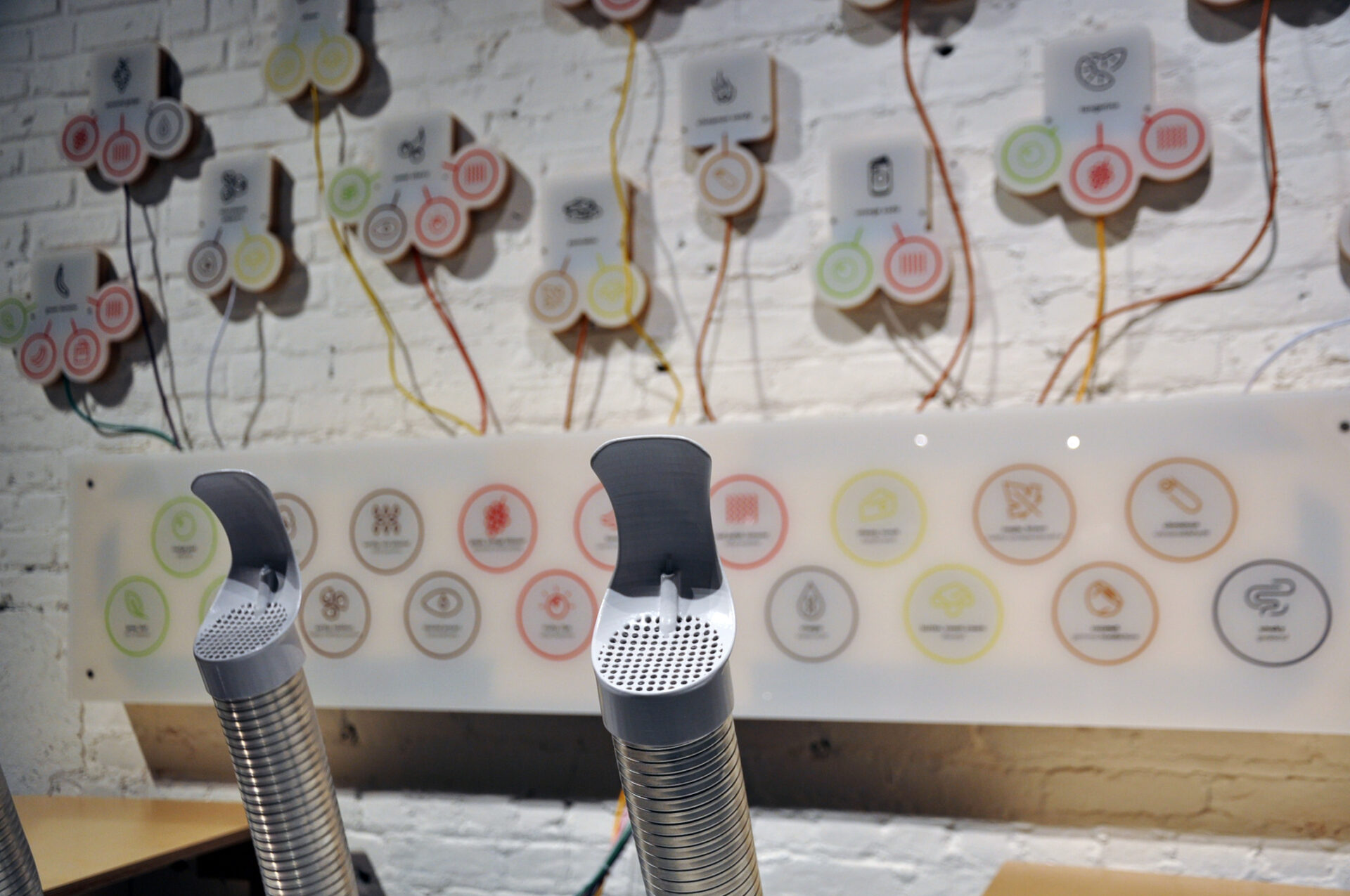 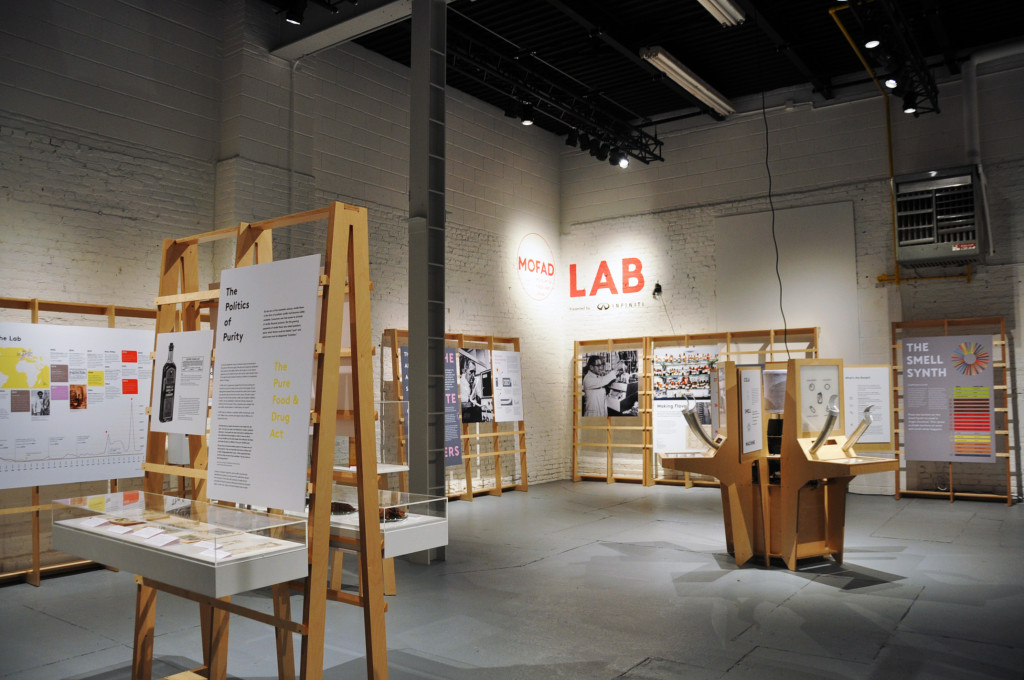 Fancy yourself a flavorist for the day, an orchestrator of scent, and experiment with how combining three very gross smells can actually result in something that smells fairly like your…perfume?

Brooklyn continues to solidify its coveted role of being New York’s go-to borough for food experiences. The MOFAD Lab, part of the forthcoming Museum of Food and Drink, is now open to the public a former auto garage on the Greenpoint-Williamsburg border, with an inaugural exhibit called, “Flavor: Making It and Faking It.

“For a long time we had no money, no space, nothing but a compelling vision planned in a tiny East Village apartment,” says Peter Kim, executive director. “What are the links behind food and our cultural identity? That’s what we wanted to explore.” The idea for a museum solely dedicated to the culture and history of food was devised by Dave Arnold, food writer, innovator, and the man behind the cocktail temple, Booker and Dax. Though the idea came to him in 2005, the on-going process from fantasy to fruition has been a lengthy one. In 2013, Arnold launched a Kickstarter campaign for MOFAD, which resulted in a pop-up that quickly gained popularity. “BOOM! The Puffing Gun and the Rise of Cereal” was a 3,2000-pound machine that puffed fresh cereal and simultaneously taught visitors about the science behind its mass production, and its rise to crunch-filled ubiquity in the 20th century. 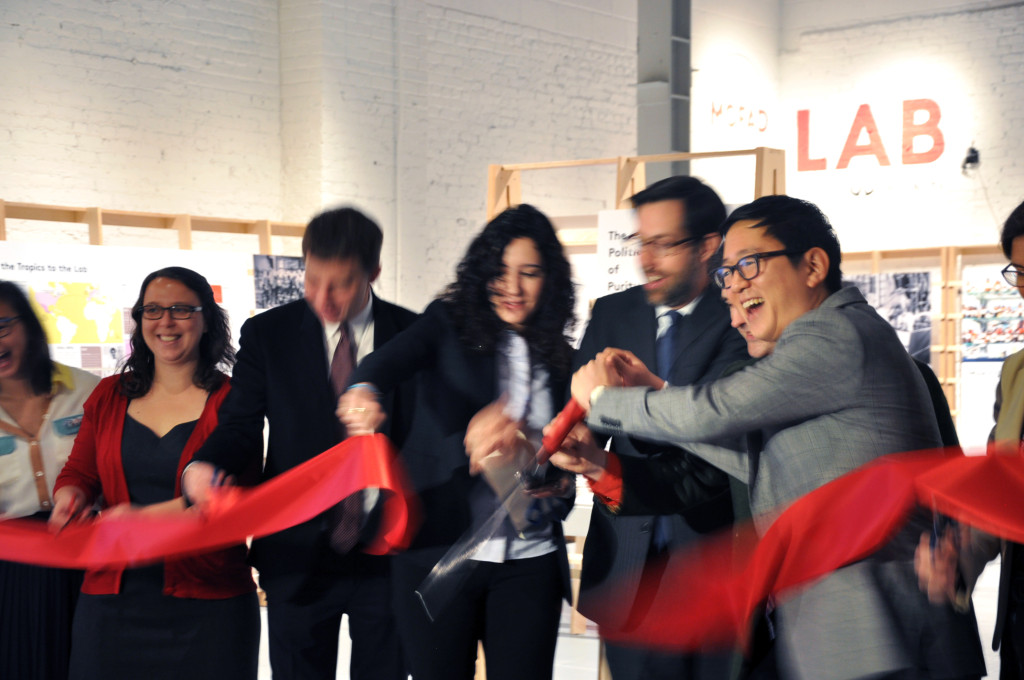 Cutting the ribbon on the MOFAD Lab. Seems like it should have been made of Laffy Taffy or Fruit by the Foot, right? Photo: Regina Mogilevskaya

While the MOFAD team continues the search for a brick-and-mortar location (which Kim hopes will be at least 30,0000 square feet, feature three exhibits at a time, include a test kitchen, and “sit squarely on the intersection of educational and awesome”), the MOFAD Lab has signed a five-year lease on its Brooklyn location and hopes to continue testing and exploring the success of its thought-provoking installations educating visitors about what is near, dear, and vital to us: food. 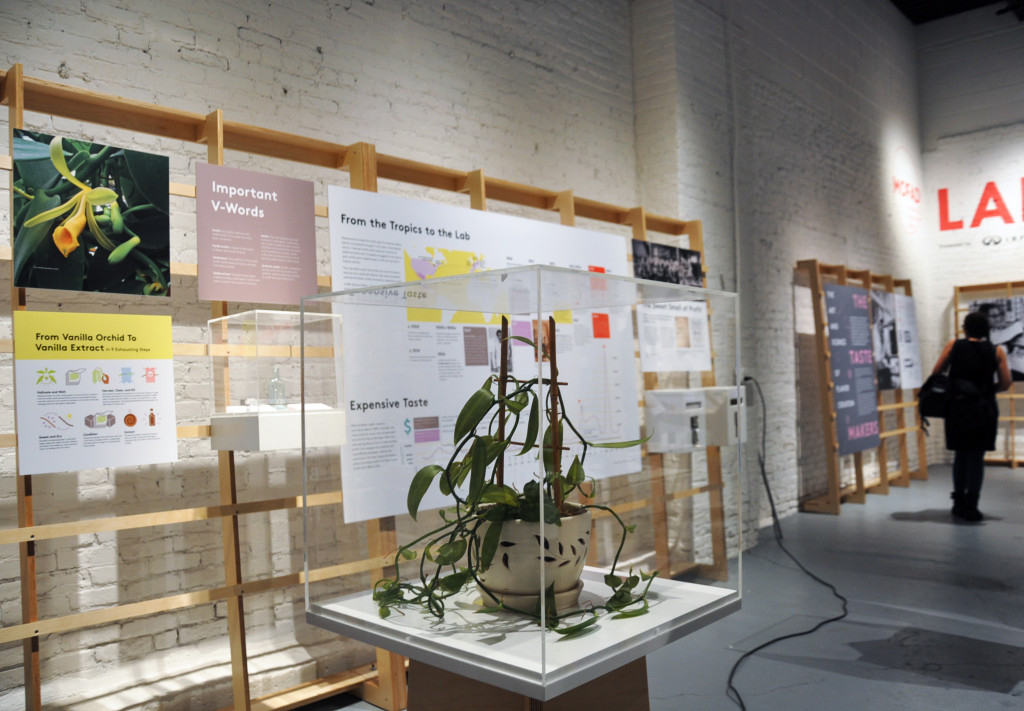 Inside the lab. Photos: Regina Mogilevskaya 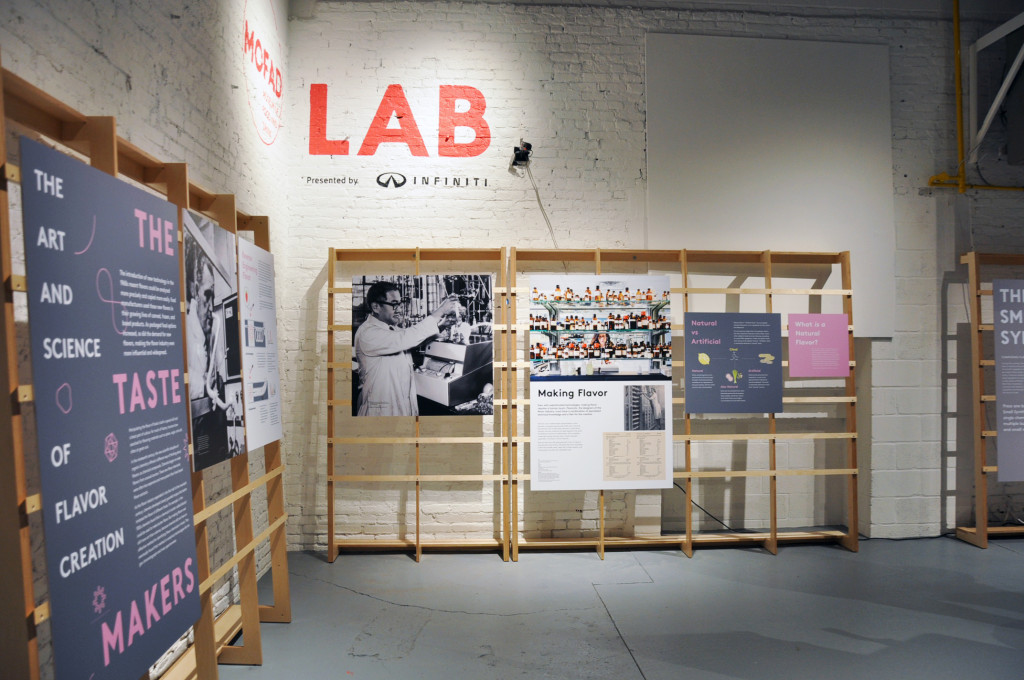 So what will you experience upon your visit to “Flavor: Making It and Faking It”? A tactile, thoughtfully designed exhibit where you can read, trace, taste, and smell the information. Think about the most recent piece of food or sip of drink you’ve had. A blueberry muffin? A Hershey kiss? A pumpkin beer? Artificial flavors didn’t just zap out of some alternative universe one day and infiltrate your kitchen cabinet. MOFAD’s exhibit takes you back to where it all began–1858, when a French chemist discovered that a chemical called “vanillin” was responsible for the flavor in vanilla, and when two German chemists discovered that they could actually produce vanillin in their own lab. 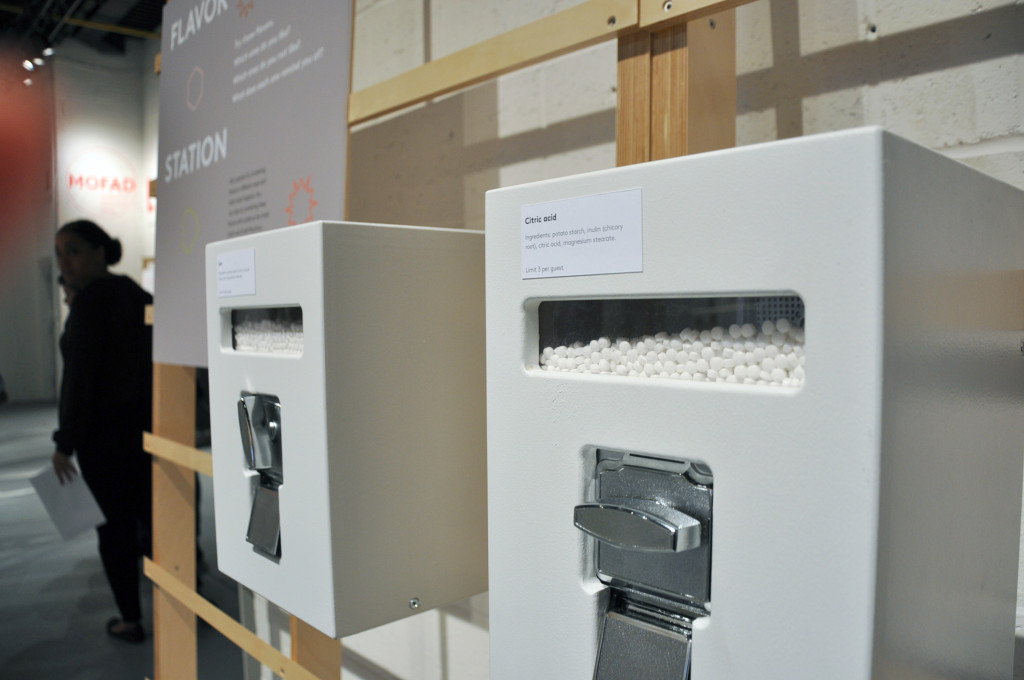 The bold flavors of citric acid (above) and MSG (below). Photos: Regina Mogilevskaya 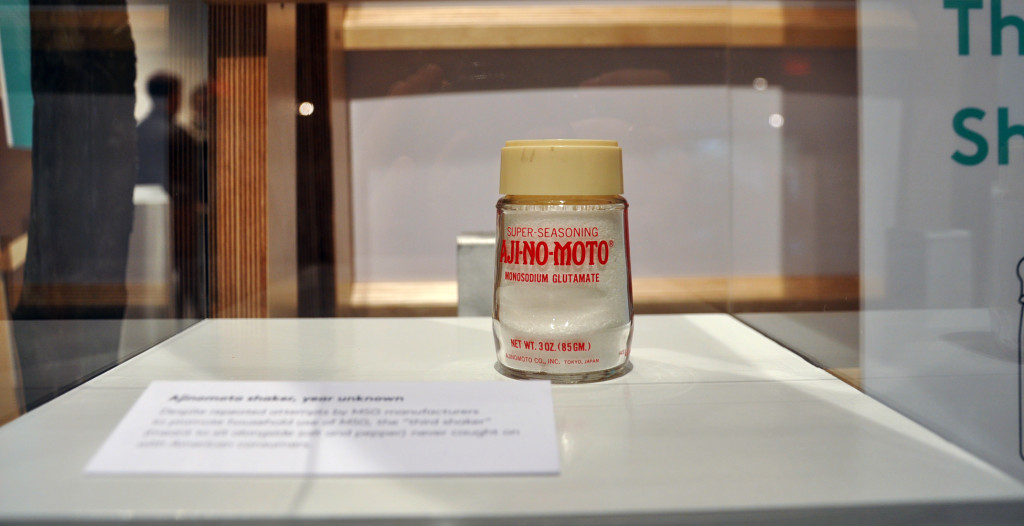 From there, visitors move across the single-room exhibit (starkly white, almost like a lab itself) and learn about the organic chemists behind flavor manipulation, how to differentiate a natural flavor from an artificial one, and why MSG isn’t nearly as bad as we think it is. Featured along the way are gumball machines that dispense futuristic white pills that allow you to taste compounds in their pure forms; vanillin versus vanilla, plain MSG versus mushroom infused with MSG, and a lick of citric acid. 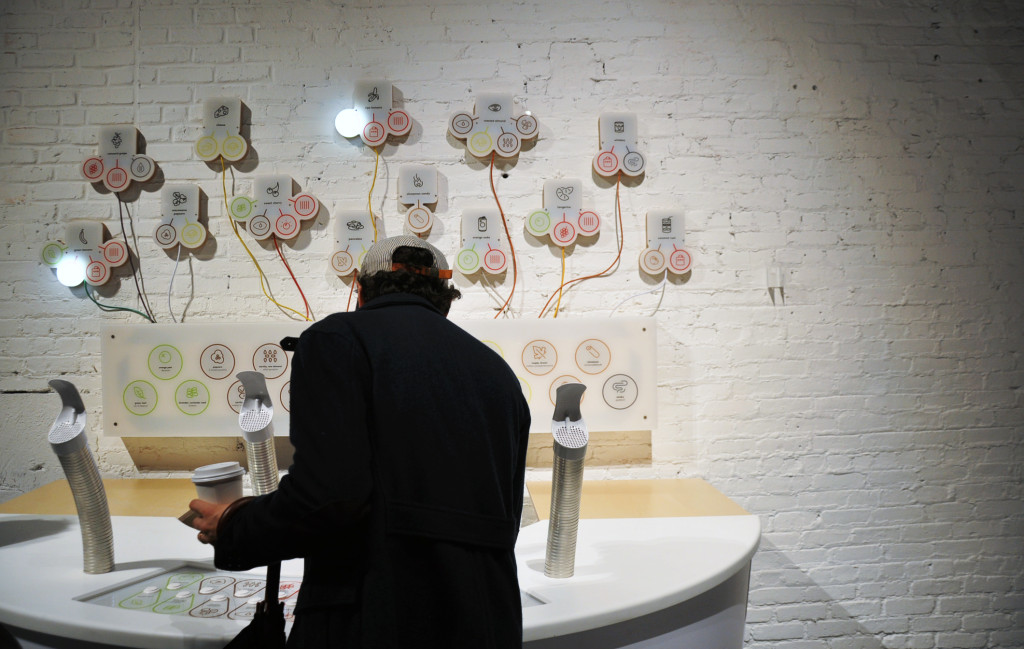 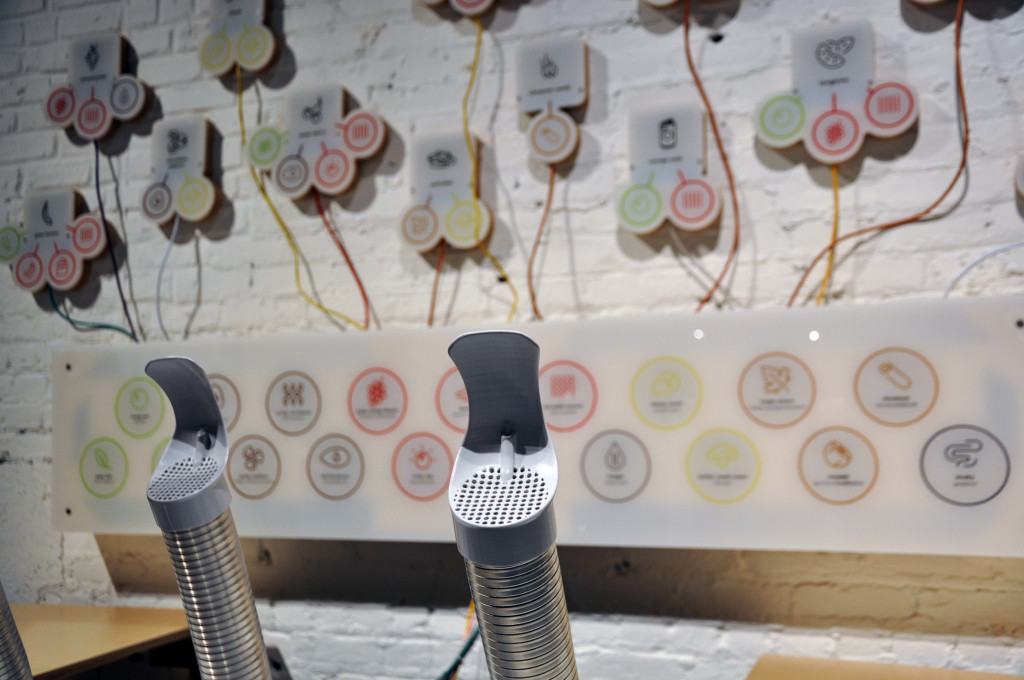 What visitors are sure to enjoy most are MOFAD’s “Smell Synthesizers.” Can your nose make out the scents of which essential oils are included in a Coca-Cola recipe? What happens when you combine the scent of pancakes with popcorn? How about coconut with “cheesy vomit?” Fancy yourself a flavorist for the day, an orchestrator of scent, and experiment with how combining three very gross smells can actually result in something that smells fairly like your…perfume? MOFAD “Flavor: Making It and Faking It” is open through Feb. 28, 2016.