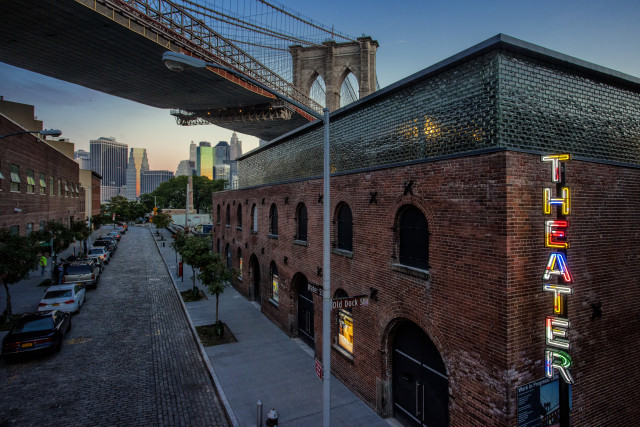 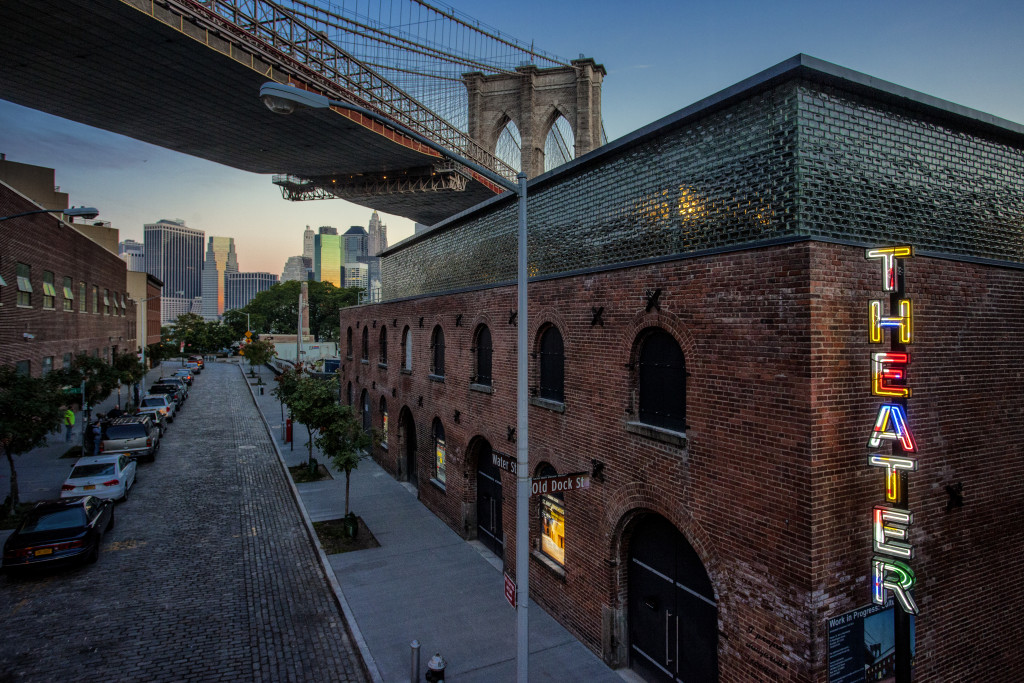 When St. Ann’s, already a robust producing organization in Brooklyn Heights, first dove down to Water Street in DUMBO to be reborn as St. Ann’s Warehouse in October of 2001, the move was a bold one. In a neighborhood where the trains weren’t close and the streets didn’t match, and the waterfront looked out over the still broken ruins of post 9/11 Manhattan, a lesser theater could have withered and died, but St. Ann’s Warehouse stood up to the challenges that it had set itself.

The lobby was a perfect example of the everything-wrong-is-right aesthetic. It was impossibly high. It was dimly lit, accessed by a single door, and had no visibility to or from the street. This gave it a speakeasy glamor of inaccessibility, confusion, and clubbiness that was both awkward and simultaneously enchanting. Even when a theatergoer became very familiar with the space, it felt unknowable–it was never quite clear where the curtains would open to admit the faithful into the latest configuration. From the basic proscenium design that housed most of the shows, the enormous space could open up in all directions, from the maze of Les Freres Corbusier’s Hell House to the long open arena of the National Theater of Scotland’s Black Watch.

Times change, though, real estate does its thing, and the old spice milling warehouse that housed St. Ann’s was torn down to make room for glitzy condos and a school. But its latest, and hopefully permanent home across the street at 45 Water Street, in the historic Tobacco Warehouse, has been worth the wait. In the new space, which begins its inaugural season tomorrow, the industrial-chic signature of St. Ann’s Warehouse is reborn. 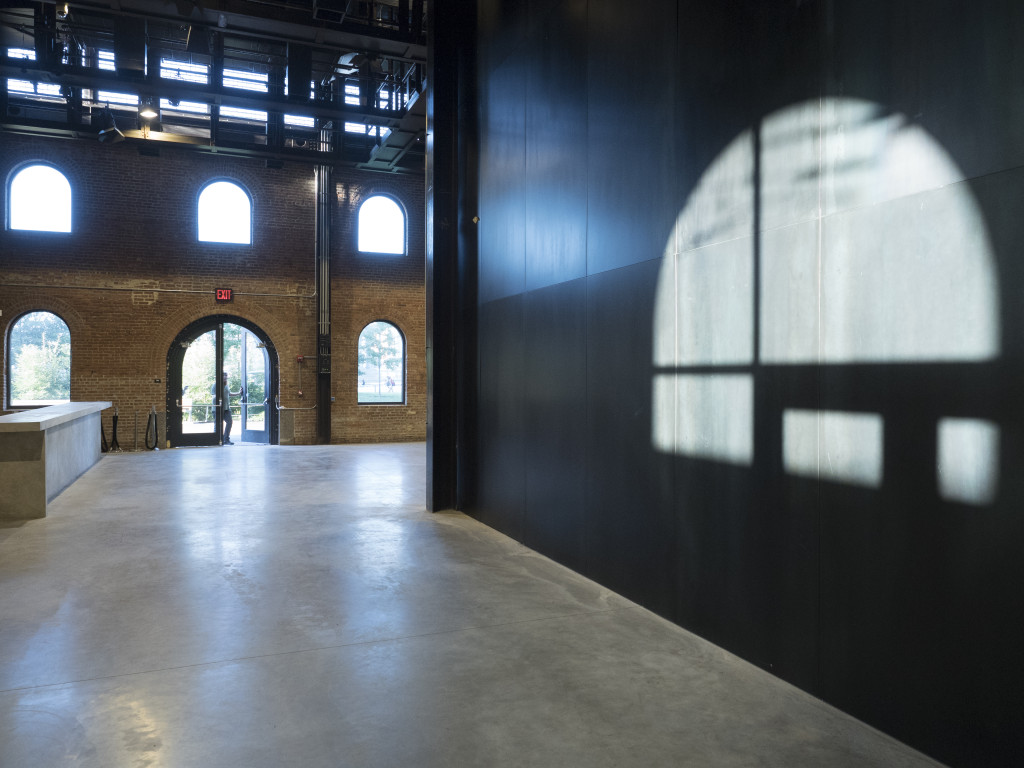 St. Ann’s new light-filled home at 45 Water Street looks onto a 7,800-square-foot public garden that is part of Brooklyn Bridge Park, where it will host a variety of events. Photo: St. Ann’s Warehouse

St. Ann’s new season begins on November 6 with (appropriately enough) the UK’s Donmar Warehouse’s all-woman production of Henry IV, followed by the American Premiere of frequent St. Ann’s collaborator Enda Walsh’s first opera, The Last Hotel, created with the celebrated Irish composer Donnacha Dennehy. Other highlights of the upcoming season include the puppet festival LABapalooza!, ART’s Nice Fish (starring Mark Rylance and Jim Lichtsheidl), A Streetcar Named Desire starring Gillian Anderson, and, in a “spaceship-shaped tent” out under the Brooklyn Bridge, NoFit State’s circus Bianco. Billed as ‘as much party as arty,’ Bianco features ‘aerial spectacles’ and ‘the magic of human balance and counterbalance.’ St. Ann’s also plans to partner with community organizations to host a wide variety of events and festivals, as it did on its opening weekend in early October, when the public got to experience its first performance, a free concert featuring the Kronos Quartet and the Brooklyn Youth Chorus.

Plywood and concrete, brick, steel, and velvet combine like old friends again, in a cleverly designed space that has been planned for the design flexibility that has become St. Ann’s trademark. Curtains and risers will still be used to create any and all performance configurations, but now those changes can happen with a brand new lighting grid and an intricate system of catwalks (not to mention air conditioning, which will allow a year-round producing season).

Like the spaces that preceded it, 45 Water St. can expand to seat nearly 700 people (the standard space configuration seats closer to 320). From a brick shell, the building has been remade into a beautiful and functional hybrid, with a glass clerestory that lifts the roof and lets in light. Each area, from the cafe to the lobby to the bathrooms, combines elements of institutional sternness (brick and plywood walls, large deep sinks) with deft and playful touches (orange bubble lamps, round green velvet settees) that offset the heaviness.

The performance space in its current configuration is a classic design, with chairs on climbing risers facing a simple stage. The seating, the only sour design note, is in tight rows of high-backed chairs that appear to have escaped from a moderately fancy conference room. Though comfortable enough, they neither recline nor allow lifting of the seat to let people pass, and add nothing to the magic. However, as Artistic Director Susan Feldman took the stage on the night of the inaugural open house, wearing her game sneakers and a look of happy weariness, and as the voices of the Brooklyn Youth Chorus rose in Crosby, Stills, Nash & Young’s “Our House,” it became clear that whatever grace St. Ann’s knew has followed the organization through the move. The acoustics are excellent, and the sense of homecoming was palpable.

Feldman, who has shepherded St. Ann’s since its beginning as a producing organization, proudly voiced her hope that the theater would thrive in the new space for the next fifty years. Hearing those brave words, it was impossible not to shiver at the memory of the water that had threatened to swamp the building and the bright carousel outside just a few years ago, but whatever happens, St. Ann’s has proved its staying power.