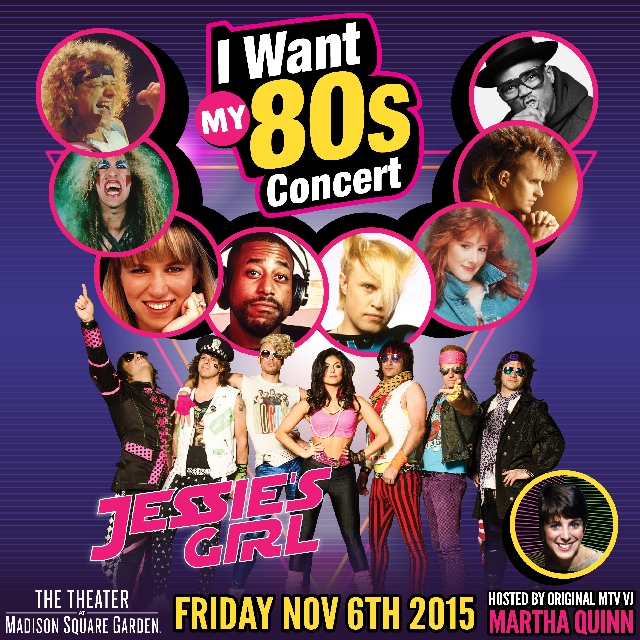 Ahhh the ’80s, the decade of big hair, shoulder pads, skinny ties, and pastels. While ’80s fashion has been either ripe for mockery or a look to live by, depending whether or not you live in Bushwick, the music of the era lives on. In recent years ’80s acts like Duran Duran, Culture Club, and Spandau Ballet, along with the package tours like Retrofutura, have drawn faithful fans from to shows around the country. The members of Generation X may be older now and maybe have kids their own, but they’re still passionate about the hits they grew up listening to and watching on MTV.

The nostalgia factor is the focus of I Want My 80s, a star-studded concert taking place at The Theater at Madison Square Garden this Friday featuring acts from the worlds of pop, New Wave, classic rock, and rap, backed by the New York City ’80s tribute band Jessie’s Girl. Appropriately enough, the concert will be presented by the legendary Martha Quinn, one of the original MTV VJs and co-host of the program The 80s on 8 on SiriusXM.

While not on the level of the revolutionary sounds of the ’60s and ’70s, the music of ’80s resonate enough that people still want to see their heroes in concert or sing the songs at karaoke bars at any given night. For Gen Xers who still love this music–including yours truly–I Want My 80s promises to be a sort of latter day high school dance, complete with hairspray, bandannas, and denim jackets.