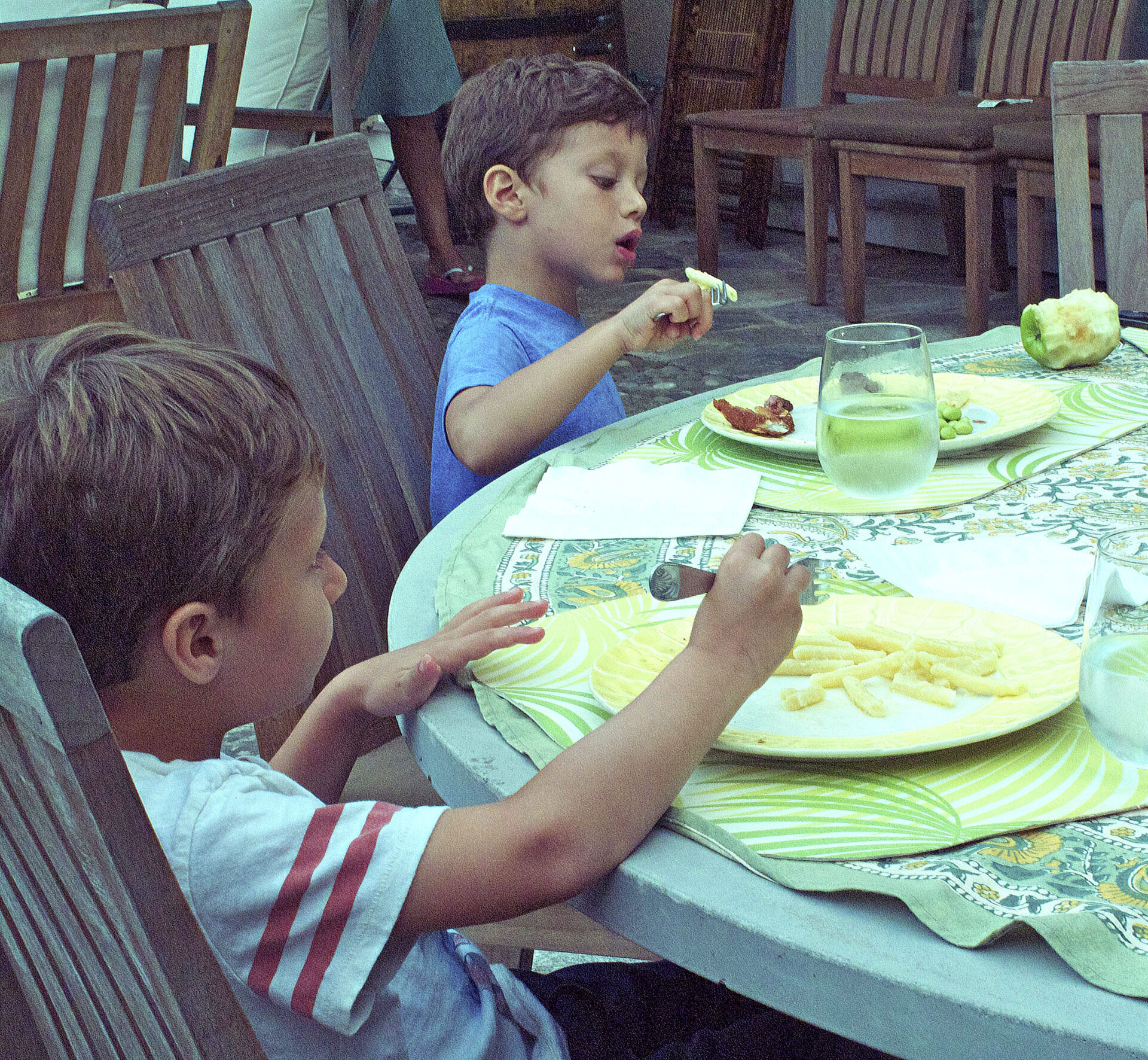 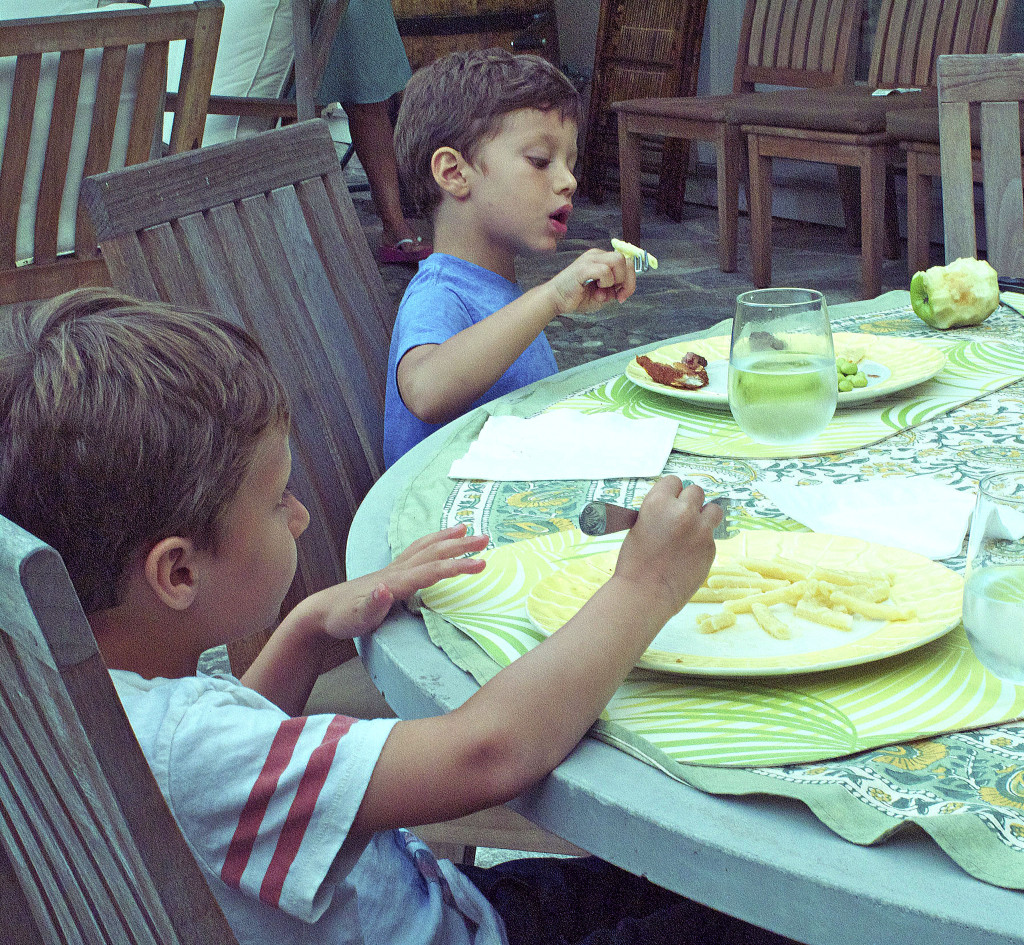 The subjects of Monsters Vs Dinner, Nate (left) and Mack. Photo: Shana Liebman

Since we started the “What’s on Your Kids’ Menu?” column over a year ago, today’s is the first that features a personal friend, and one of the best cooks I know, Shana Liebman. Shana, who lives in Williamsburg with her husband, Michael, and two sons, Nate (six) and Mack (three and a half), has introduced me to some of my favorite dishes, like this snap pea salad I can’t for the life of me recreate to her level of perfection. She’s changed the way I save recipes by turning me onto the Paprika app. And she’s made me feel much more sane about trying to feed my kids, in part through her blog, Monsters Vs Dinner, and her BB Kids column, The Pickiest Eaters.

Raising kids in our food-crazed culture can take a lot of joy out of cooking. When you have so much in your dinnertime repertoire to bring to the table, and your kid just wants buttered pasta, it’s exasperating. Which is why Shana’s ability to peel back the curtain on the struggle to create “good eaters” is so fun to read. In one post, titled “Nope, Dinner Still Isn’t Ready and Whining Won’t Help” she relays a hilarious blow-by-blow:

6:18 pm: Nate eats four strands of pasta and asks to be excused. We say no and he slides off his chair onto the floor, then tries to stick forks in water bottles. We tell Nate to join us; he cries. Mack cries and begs to be let down from his chair even though he’s still eating. Nate goes to his room while Mack cries. We let Mack down and quickly finish the boys’ dinner.

In spite of these odds, she’s developed some good tactics over the years for encouraging her sons to try new things, and she hasn’t dumbed down her cooking, either–there are plenty of tips and recipes on her site for omnivores, too. Here’s how she handles a house of very different palates.

BB: What kinds of eaters are your children?

I have two very different eaters: one is extremely picky and the other is unusually adventurous. Two ends of the spectrum.

BB: What do you think about picky eaters, now that you’ve been feeding one for the past six years? Do you think all the literature and recommendations out there to try and “change” them is fair? Are there levels of picky eating that we should be more sensitive to?

I think I came out swinging on this issue, determined to figure out how to cure my kid’s “picky eaterness” and then realized that it might not be possible (at this age) to drastically change his diet. I was convinced that if he just tried more things, he would eat more things but I observed his very visceral (even emotional) reaction to many foods, which made me think it runs deeper. Then I read this article in the New York Times linking picky eating to depression. I don’t think my child is or will be mentally ill, but that super sensitivity is something I now try to respect. Also I just got tired of his breakdowns at dinner. (My thoughts on that issue are here.) So I have recently taken a less aggressive approach but before that, Dina Rose’s book, It’s Not About the Broccoli was very helpful in coming up with concrete strategies. Many of my successes and failures are revealed in my Pickiest Eaters column.

BB: What’s your policy on introducing new foods or encouraging your boys to try things they aren’t interested in?

My youngest is pretty easy because he eats everything from kale salad to mac and cheese. But with my picky eater, it’s a struggle every time. These days, what seems to work best is casually introducing a new food as similar to another food. For example, he doesn’t eat hamburgers but he will eat a turkey burger that I cut up into pieces and call “sausage” and serve with toothpicks. Forcing the issue however has resulted in major failure.

BB: What’s your policy on junk food and sweets?

I try to limit them but there are weeks where my kids eat ice cream every day and candy every night. We often end the day with a “special treat” which acts as a reward for eating their veggies and not fighting. But I know that’s probably terrible parenting.

BB: What’s a typical breakfast like for you and the kids?

It’s funny, as kids my husband and I ate cereal or Lender’s bagels every day for breakfast but with our kids, we noticed that starting the day with sugar or carbs led to major crankiness just as we were leaving for school. So we tend towards bacon and eggs or at least healthy waffles. And there’s always fruit. For a period we played around with themes, like all items started with the same letter. (As in this ABC Breakfast.)

My picky eater could eat the same lunch every day and often does: soynut butter and jelly sandwich, cheese, yogurt. I always pack an apple or carrots—which inevitably come right home.

My youngest won’t eat sandwiches, which is a bummer, but he could eat pasta every day. Sometimes I give him leftovers or scrambled eggs, and always veggies and fruit that he actually eats.

BB: How about your go-to dinners for the family? And do you do the two dinner thing, where you feed the boys first, then you and Michael?

We have tried the family dinner thing but it never quite works out for anyone. These days the boys eat first but I try to have some overlap between our dinner and theirs. (I’ll cook a pound of spaghetti, serve 1/2 to the kids with butter and cheese and then saute the rest of the pasta with shrimp and veggies.) Usually Mack winds up eating both. Nate always has his requisite carrots with pasta, hot dogs or eggs. I usually try to get him to try something new but he almost always balks and I no longer push too hard.

BB: Any favorite restaurants you eat out at with the kids?

We’ve probably had the most success at Mole or the now-defunct Driggs Pizza. In general, a big, loud burger place or an empty Mexican joint is our thing. Nate’s pickiness does limit the adventurous eating-out that we used to do, but occasionally we’ll try a more exotic place, like a Chinese restaurant in downtown Flushing, to introduce Mack to new tastes. Last week we found a great old-school red sauce Italian place in Manhasset, Long Island, that also served pizza so Nate was content.

BB: What do you always keep stocked in the pantry for last-minute meals?

BB: Are there any cookbooks that you love?

I tend not to consult cookbooks until I know what I want to make and then I’ll look up a recipe (or five) and go from there. (I write about many of the recipes I try and/or adapt here.) I probably look online more often than books these days: Food 52, Serious Eats, Smitten Kitchen, New York Times are sites I like. And Cook’s Illustrated is my bible.

BB: Do you have a favorite recipe that you’d like to share? Something you’re cooking now that the family enjoys?

I’m pretty obsessed with my slow cooker these days. Recently I made ribs that were so easy and so good. I just dumped the Meat Hook’s BBQ sauce over pork spareribs in my slow cooker and forgot about them for 8 hours. The ribs were incredibly moist and tender. We didn’t even pretend to share them with the kids.