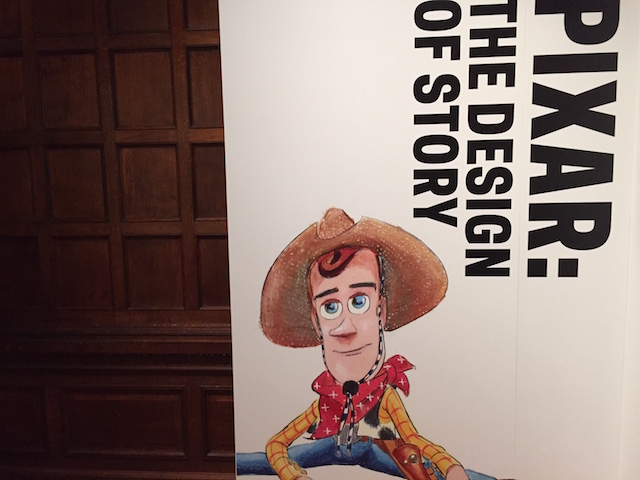 The Good Dinosaur doesn’t come out in theaters until November 25th, but you can still get a Pixar fix before then. Photo: Meredith Craig de Pietro

If your kids are human, then they (and you) are already familiar with the Pixar brand. Growing up, your daughter was attached to her Buzz Lightyear doll, while your son slept only in his fuzzy Finding Nemo pajamas. Maybe earlier this summer, you sobbed your way through the emotional roller coaster of Inside Out, happy that the family was immersed in darkness. Pixar is known for making  that go deeper than most kids’ flicks, leaving images deeply imprinted on childhoods and uncovering lost memories in adults.

The characters in Inside Out were thoughtfully created by the geniuses at Pixar. Image courtesy of Pixar Animation Studios, © Disney/Pixar

The new exhibit “PIXAR: The Design of Story at the Cooper Hewitt, Smithsonian Design Museum” breaks down the behind-the-scenes process of such a big undertaking. I took my 6-year-old son to the show expecting to have him participate in their family “Design Tales” programming, but it turns out that it was for ages 2 to 5 only. Without the organized educational component, I wasn’t sure how fun the show would be. But like the films, this family friendly exhibit appeals to all ages. It aims to examine the design process from concept through finished product. The amount of work that goes into each movie is almost comical. For instance, the research boards for the film Cars dive deep into the historic Route 66, with the inclusion of landscape paintings, color palettes, and actual dirt samples. Concept art from all our favorite movies was on display. We found it interesting to see all of the early incarnations of Woody from Toy Story, who looked completely different than the end result.

The show is housed in the process lab, a small exhibit space that centers around large drawing tables where kids can devote time to projects like drawing a squiggle and trying to make a character out of the abstraction. Inspired by Inside Out, kids can also try their hand at drawing all their different emotions. When we were there, young artists were working hard on coloring, and unlike many other busier museums, this one had plenty of paper and fully inked markers for use. 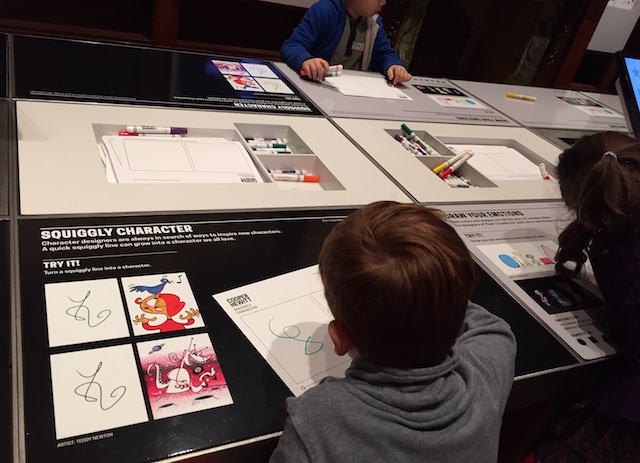 Although the museum’s Design Tales family programming is only for preschoolers, the exhibit is interactive for all kids, who make good use of the fully stocked drawing tables. Photo: Meredith Craig de Pietro

If you’ve ever wondered where the idea for the hopping desk lamp in Pixar’s logo comes from, you’ll be interested in watching the groundbreaking first Pixar short film made in 1986. My son loved watching the two-minute Luxo, Jr. (which stars two hopping lamps and a rubber ball) while comparing it to its storyboards and design models. You really get a chance to see how a simple idea is brought to life in a unique and thoughtful way, without the usual condescending kids’ schlock.

Another fun feature to Cooper Hewitt, is the magic pen that attendees receive with their tickets. The pen can be used on the many interactive tables to design objects, get inspired, study additional Pixar artwork, or free draw. The other end of the pen can collect museum favorites by tapping the pen and automatically saving the item to a website which can be accessed at home. The magic pen makes the entire museum interactive, and I literally had to bribe my son away with a lemon donut from the museum’s Tarallucci e Vino museum cafe.

For kids who just can’t get enough Pixar, the gift shop carries the book, Designing With Pixar: 45 Activities to Create Your Own Characters, Worlds and Stories which should just about keep everyone busy until the new Pixar film, The Good Dinosaur, hits theaters everywhere on Thanksgiving Day.

Although most of the Pixar related family programming has ended, teens can participate in Design Prep 101: Pixar: The Design of Story, a Wednesday evening class for budding animators. FREE. Starting December 2nd, 2015.