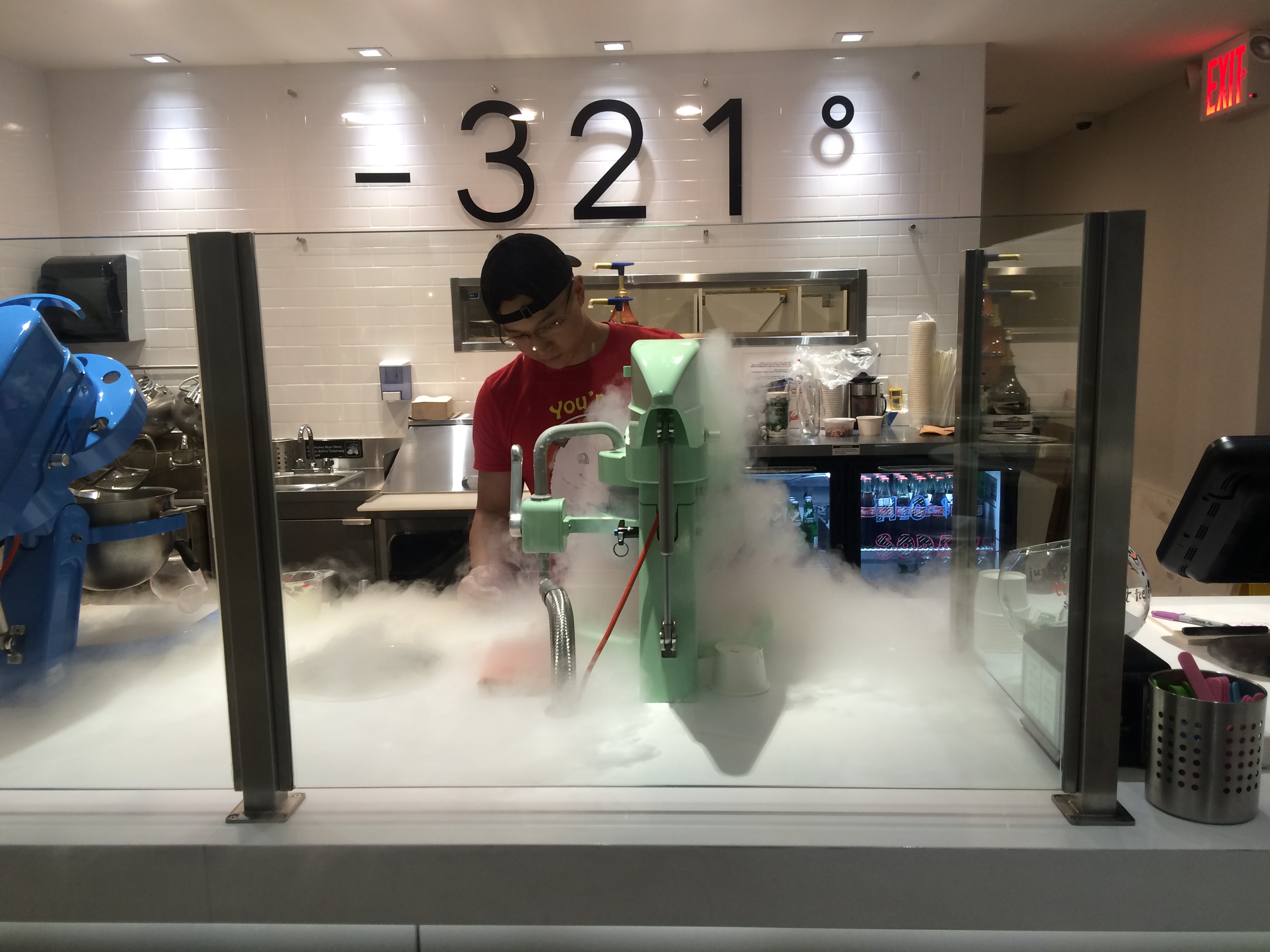 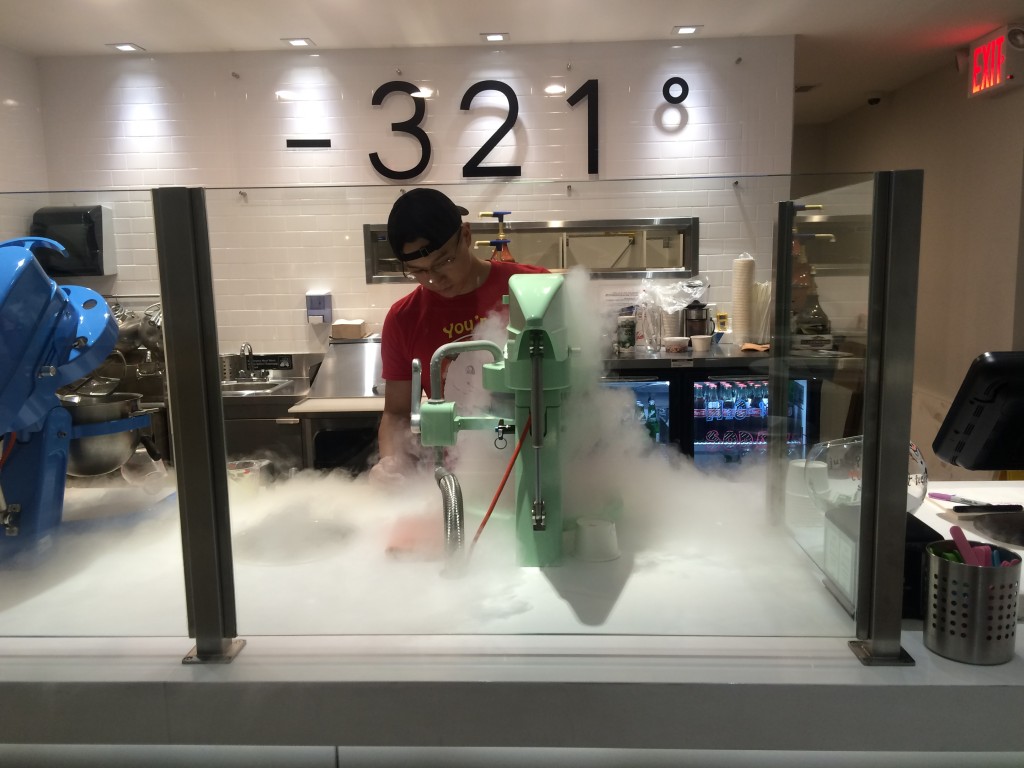 I’ve had liquid nitrogen ice cream three times in my life. The first was in my high school chemistry class. The second was from a Dippin’ Dots at a mall food court. And the third was last week at -321 Ice Cream Shop in Williamsburg, the latest frosty treat purveyor in New York City with a nascent trend for us to try: chemically frozen ice cream.

The concept has been around for at least 20 years, and many high-end restaurants in New York use the method to make their own desserts. It’s taken hold on the West Coast in recent years, and Ruan and his partner Benjamin Li wanted to bring it to New York on the heels of similarly eclectic trends like Taiwanese snow ice and Thai ice cream rolls.

Luckily for -321, which soft-opened in September, the mild early winter weather in New York means ice cream is still an appropriate grab-and-go snack. I stopped by last week to see how the process worked and to decide how it tasted compared to regular ice cream. The place was empty when I stopped by, a good thing because the made-to-order component can result long lines. On any given day, there are six to 10 flavors available split between menu mainstays like green tea Kit Kat, rocky road and cookies and cream, and seasonal specials like pumpkin and apple pie. I ordered the signature green tea flavor ($6) and watched as the server prepared my order. He poured a green tea flavored base in one of the three Kitchen Aid-like mixers, added liquid nitrogen and let it churn for about three minutes. 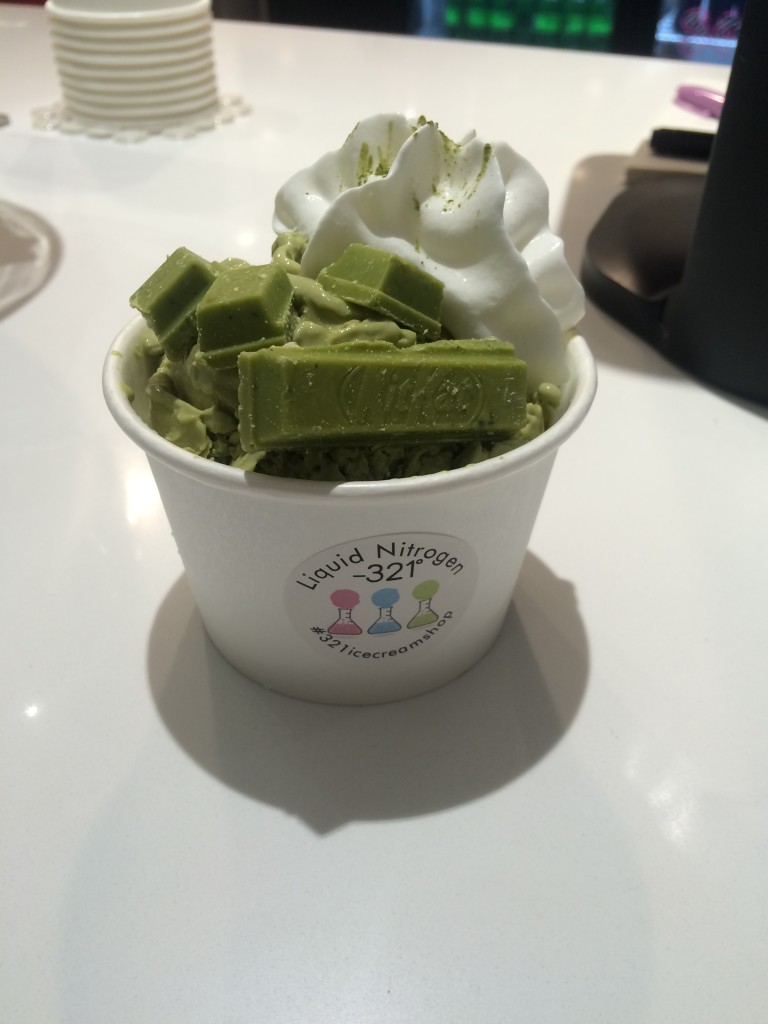 Topped with green tea Kit Kats and whipped cream, the one-size-fits-all serving doesn’t look at all different than what you’d get at a traditional shop. The price is a little steep for a scoop of ice cream, but liquid nitrogen isn’t cheap. Ruan told me that his version yields a finer and smaller ice crystal than regular ice cream, and he was right. The ice cream was smoother than traditional scoops, but maybe that was because I was expecting it to be. Despite an attempt to bring the rest of my order home, it melts just as fast as its regular counterpart.

I recommend -321 because after all, it’s ice cream. Plus, a bit of whimsy and entertainment. They update their menu on Twitter and plan to introduce a coffee and donuts flavor this winter. Though they get four to five tanks of liquid nitrogen every week, they sometimes run out and can’t make ice cream, so don’t say you you weren’t warned–they post that on Twitter as well.