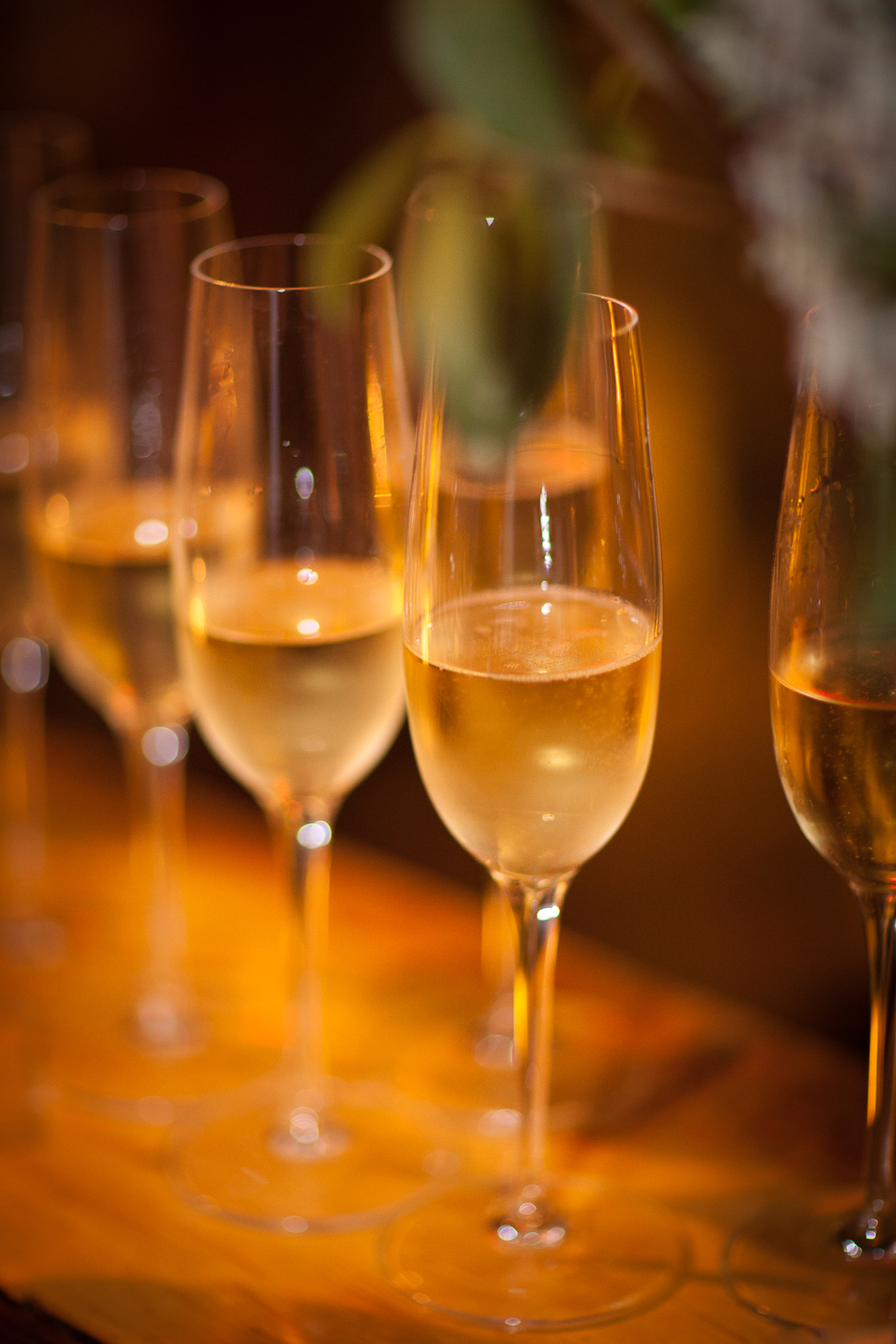 No seriously, Pictionary is a lot more fun than Meg Ryan is making it look. Photo: “When Harry Met Sally”

Oh man, what are you going to do on New Year’s Eve? It’s one of the toughest nights of the year to plan because there’s intense pressure to go out and blow off steam from the previous 12 months (not to mention whatever holiday situation you just endured), yet…it’s amateur hour out there. New Year’s Eve just gets so sloppy so fast. My best suggestion is to gather the people who made your year great–or made a tough year bearable–and buy the best version of what everyone likes to drink, make something extra delicious, or get some sort of take out or party platter if cooking’s not your thing, and have a cozy dinner at home. Play some cards or buy a game (if you’re looking for something easy but not completely mindless, Phase 10 is really ace). Remember all those 80s movies where adults played Pictionary? That seems like it was actually pretty fun. Or, forgo the evening festivities and host a New Year’s Day open house, with plenty of Hoppin John. This recipe from superstar Southern chef, Sean Brock, is sure to bring you plenty of 2016 luck.

Not convinced? Still want to go out and celebrate? Brooklyn has parties (some of them even fun sounding) in spades. Here are a few that get the Brooklyn Based seal of approval.

The Royal Palms Flamingo Formal (free) If you want to put on some sequins and some dancing shoes, but you don’t want to spend a million bucks, this is the low-key but high glamour party for you. The Bolivian Llama Party pop-up will have eats to soak up all those tiki drinks and you can shuffle, or not.

The Llama Inn ($100 with passed food + open bar, 9pm-1am) Strangely, the Royal Palms does not have the only South American llama party in town. The Llama Inn, a Peruvian spot in Williamsburg, is hosting a $100/person party with Peruvian street food snacks like empanadas, beef heart skewers, crispy pork sliders and fried yuca. Ring in 2016 with a Pisco Sour in hand, then get it started right with late night karaoke .

The Fawkner Formal (free) On Smith Street, Fawkner, one of our favorite new bars in 2015, is hosting a party with food, drinks, their cozy fireplace and a complimentary champagne toast at midnight. Dress up, or don’t, everyone is welcome.

The Groupmuse at The Muse ($25) What better way to set the tone for new experiences in the new year than trying a combination you’ve never imagined before–hearing Bach’s Brandenberg concertos in an alternative circus space complete with fire dancers and aerialists working the bar. This is where Oriana Leckert, chronicler of every under-the-radar event space in NYC, will be ringing in 2016 together with her beau, who will be serving vegan Persian snacks. If you want even more adventure on your New Year’s calendar, she tipped us off to an underground masquerade in a Gothic manor and schoolhouse that doesn’t even take place in the five boroughs. The $144 tickets include a ride there and back, and a bottle of bubbly). 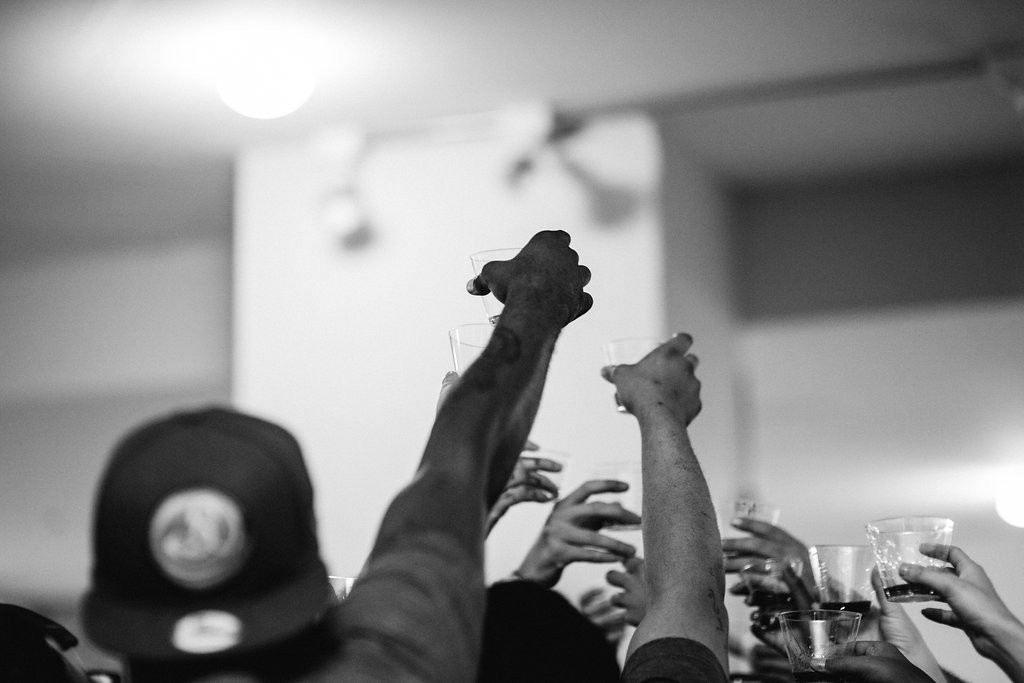 The Brass Bash at Brooklyn Winery ($175) This party purports to bring New Orleans to Brooklyn for the evening. The ticket gets you an open bar with Brooklyn Winery wine, plus beer, liquor and special cocktails, Louisiana-style snacks, dancing and a brass band. Definitely a luxe and classy way to spend the night. Use the code: NYEBrooklynBased for $25 off the ticket price.

Brooklyn Brewery Bash ($115) Just a few blocks away from the winery, Brooklyn Brewery will be pouring pretty much every specialty beer they brew, opening a Ghost Bottle at midnight and serving all the feel-good snacks (pigs in a blanket, vegan Thai noodles, brownies, soft pretzels). Sounds festive yet casual. There are no tickets at the door for this event so get them now.

Dirck the Norseman ($75 until 12/30, $85 after) In Greenpoint, Dirck the Norseman will be hosting an open bar with wine, beer and liquor, and a Champagne toast at midnight. They say that appropriate attire includes everything from ball gowns to footed pajamas, so this seems like an easy going neighborhood bash where you can eat some schnitzel and drink some locally brewed beers while 2015 slips away. 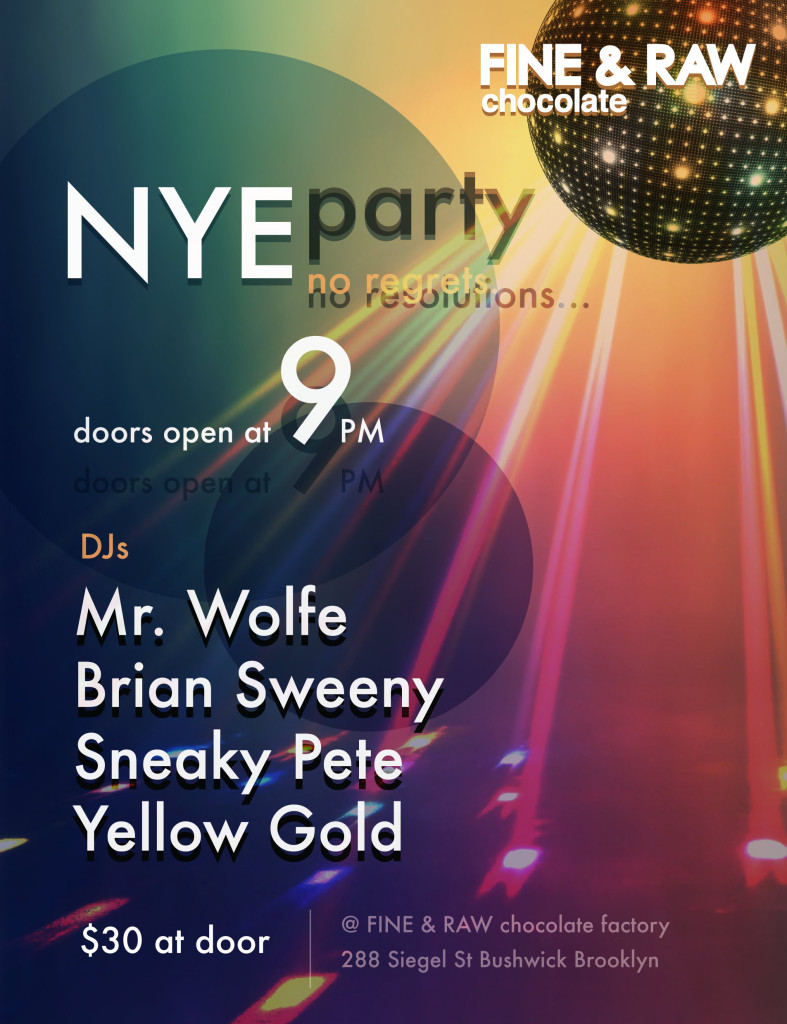 Fine & Raw Chocolate factory party ($30 at the door) All the stuff about the Mast Brothers? Let’s take a deep breath and remember that there are other chocolate makers in Brooklyn, including the party nerds at Fine & Raw, who are opening their warehouse what sounds like a killer New Year’s Eve party with DJs, a Champagne happy hour from 9-10:30 and just all around good vibes.

Tiki Disco ($100) Brooklyn’s most bro-tastically insane dance party is of course going down again on New Year’s Eve. Dance your ass off and make out with a stranger at Good Room in Greenpoint. Your ticket includes a five-hour open bar, party favors, early morning snacks (the event goes until 6am) and a Champagne toast. Oh, plus super talented DJs and a sure-to-be amazing dance floor.

Purple Rain Dance Party at Videology ($10) It’s a Purple Rain dance party. Not sure what else we need to say here. Let’s go crazy.