I’ll admit that I was considering beginning this story with a vignette of a kindly and gracious Uzbek woman reading my fortune over a cup of tea,  amid a lavish feast of exotic foods from a part of the world I had scarcely thought about since my junior high geography class. But it seemed too smug, too quaint. I had a sudden vision in my mind of the ghost of Edward Said glaring at me with a stern face while quietly drumming his fingers on my dogeared copy of his landmark 1978 work Orientalism while a short French cigarette smoldered from his other clenched fist. I just couldn’t.

Let’s start over, shall we?

Let’s start over by rethinking what a cooking class can be. Let’s replace charmless stainless steel teaching kitchens with lived-in apartments in the outer boroughs, studded with family photos. Let’s replace culinary school graduates with an army of wives and grandmothers from parts of the world with deep food traditions that span centuries, if not millennia. Let’s replace dogma and exacting technique with care, love and generosity. 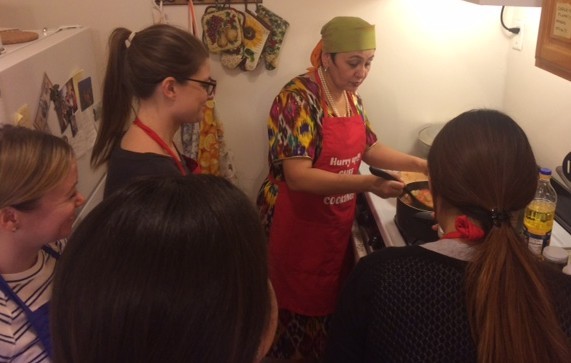 Demira opens her home, and her vast knowledge of Uzbek cuisine, to students with League of Kitchens. Photo: Tom Mylan

If this seems like the kind of quiet revolution you might be interested in, the lovely people at the League of Kitchens seem to be leading it by connecting curious home cooks with teachers from around the world who have food in their blood from birth and haven’t learned from cookbooks or glorified vocational schools, but from their neighbors and family.

When I was tasked with writing an article about League of Kitchens, I chose from among Japanese, Bengali, Greek, Argentinian and Lebanese cooking classes. Those were all cuisines I had at least a passing knowledge of, but I figured that I should go to one that I knew nothing of and couldn’t imagine another opportunity to learn about–the food of Uzbekistan taught by a retired physician from Samarkand named Damira, in her apartment in Boro Park. 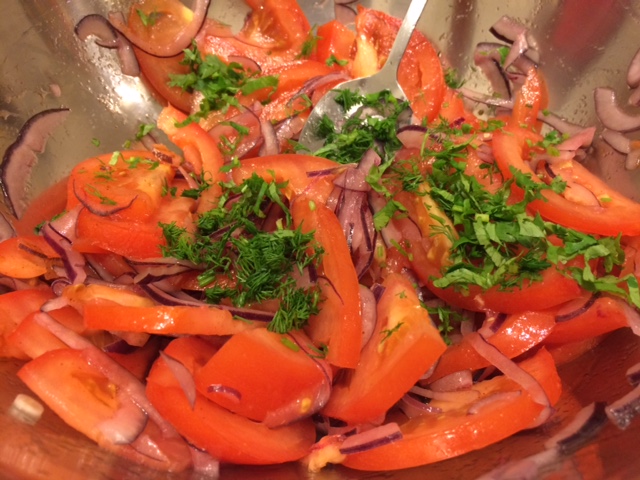 To understand Uzbek food you have to understand the history of Uzbekistan. While its neighbor to the south, Afghanistan, is known ominously as the country where empires go to die, Uzbekistan has long been the central node of a vast, pre-industrial trade route known as the Silk Road. Samarkand, the great walled city that compelled Alexander the Great to wed a Uzbek princess rather than attempt to besiege it, was where Indian spices and steel ingots were traded for Nordic pelts, Chinese silk and Venetian lace. Today, Uzbekistan contains over 100 distinct ethnic, religious and cultural groups from every end of the trade routes that met in its heart. Imagine Bukharian Jews frying Indian samosas sharing them with their Muslim neighbors who are making beef and onion dumplings that look curiously like Italian tortellini and you get a hint of the cuisine and culture.

What exactly are you getting into with a League of Kitchens class? 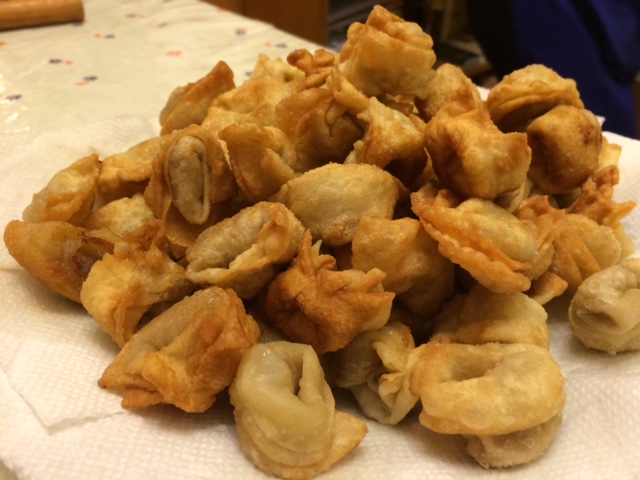 Barak can be served fried or boiled, and either way, you wont be able to stop eating them. Photo: Tom Mylan

Well, first of all, you have to understand that these are not breezy 90-minute sessions designed more for cocktail party small talk than actual learning. These classes are serious, hands-on and five-hour experiences. If that sounds like a really long time to be dicing carrots or chopping cilantro, take heart, each class begins with an elaborate lunch and ends with an even more elaborate dinner with the small group of fellow students–generally just six of you. That is a lot of food, and a lot of instruction for the $149 class price.

The menu we spent the afternoon making in Damira’s kitchen, with help from her son and husband (a history professor), included an herbaceous beef stew as strange and exotic as its Silk Road provenance would suggest, two salads and the by far stand-out dish, both from the point of view of making them and eating them: Uzbek beef dumplings.

The dumplings, or barak as they are called in Uzbekistan, were a simple mixture of fresh ground beef and grated onions that are stuffed into a hand-rolled flour and egg pasta wrapper and then folded into the shape that Americans would generally recognize as tortellini. While it took a little getting used to the method of molding, folding and then forming the shape of the beef packets around the tip of my finger the motions soon became soothing and Zen-like affair after I screwed up the first few. From there they can be boiled and served with sour cream or pan fried in oil and eaten as fast as they cool.

As our day with Damira began to come to a close we were shooed out of the kitchen and away from the cooling dumplings and ushered into her family’s dining room so that she and husband could plate up all the goodies we had made while her son gave us a virtual tour of Samarkand on his laptop. After the massive platters of food arrived and we had eaten more than anyone was comfortable with the fortune telling began.

Looking out over the table as my fellow students and I grasped our rune tiles, awaiting Damira’s word on our futures (she saw, a time of “great change” ahead for me), I realized that there was a substantial side benefit to the League of Kitchens mission to connect knowledgable cooks with eager apprentices. Living in New York we’re lucky to be able to eat in restaurants from around the world at a moment’s notice, and to revel in the diversity around us. But how often do we really get to spend time in the kitchen of someone we just met, who learned to cook half a world away? Learning to make dumplings from Damira, and then sharing them with her family, at her table made me feel connected to the larger world in a way that might even win Mr. Said’s approval.