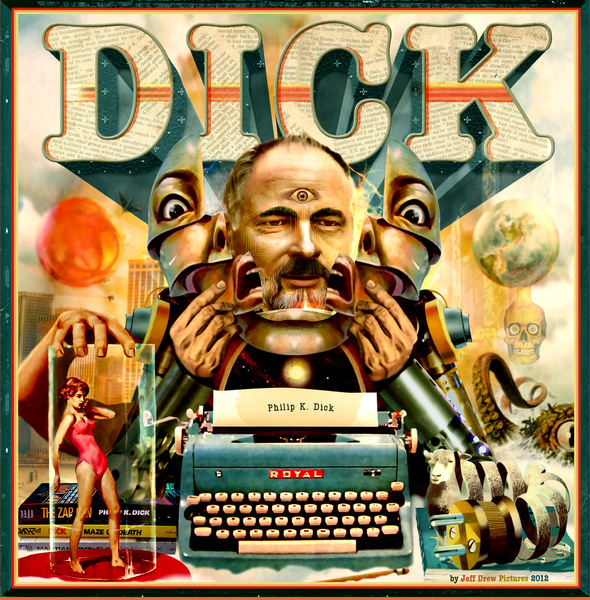 Blade Runner. Minority Report. Total Recall. A Scanner Darkly. The Man in the High Castle. Even if you aren’t familiar with the writer Philip K. Dick, you’ve likely watched at least one movie or television show based on his iconic works of science fiction. All of those titles–and fantastic, paranoiac visions of the future–bloomed from the singular mind of one man. A man who wrestled with amphetamines, alcohol and mental illness for most of his life. A man who believed that he was partially possessed by the mind of what he described as a god-like artificial intelligence satellite that was beaming into his head by way of a pink light for a few months in early 1974. A man who struggled in poverty and obscurity until just a few years before his death in 1982.

Tonight begins the four-day run of the Philip K. Dick Film Festival at Village East Cinema on Second Avenue in Manhattan. Daniel Abella, a filmmaker who came to Philip K. Dick through the lens of the magical realism of Jorge Luis Borges, started the annual festival in 2012 to showcase independent science fiction and controversial documentaries that investigate themes of art, consciousness, time travel, UFO contact, metaphysics and existentialism. Most importantly, the films that Abella and his fellow curators pick to highlight each year explore how those themes, as expressed through science fiction, interact with contemporary science itself.

“It’s really important that we start thinking about the interface between science fiction and science fact because sci-fi really does influence the direction science moves in,” Abella told me in a phone interview. “I mean, look at some of the predictive data analysis of crime that computer scientists are working on right now. If that’s not the kind of ideas Philip K. Dick was exploring in Minority Report, I don’t know what is.”

Abella told me that he chooses works for the festival that show a more thoughtful side to science fiction. “There’s always good sci-fi around. The real stuff that makes you think and question, you know, ‘What is reality?’ The problem is that Hollywood takes those stories and ideas and tries to make a formula,” he said. “It becomes more about action and effects and blowing stuff up. They end up not being very satisfying. I try to show films by people with different takes and fresh ideas that can change the way we look at things.”

Here’s a short list of festival recommendations from Abella:

Clones The Island of Dr. Moreau meets Total Recall and the Boys From Brazil, starring Rutger Hauer, another Blade Runner star, as a mad scientist who just wants to help.

All films are at Village East Cinema, and tickets are sold in programmed blocks–there are two blocks per day, Friday through Sunday, just one on Thursday night. Most blocks include either a variety of shorts, or a feature, plus a Q&A with filmmakers or a panel discussion, and tickets are $25 per block ($20 in advance) or $120 for the entire festival ($100 in advance). This Groupon, which is only good through Thursday, Jan. 14, lowers the price to $15 per block, $40 for the festival, if you want to take a long, weird dive into the world of PKD. Here’s the entire program for the weekend. There are also related events and panels all weekend long at Lovecraft, an H.P. Lovecraft-themed bar on Avenue B. Now you know.