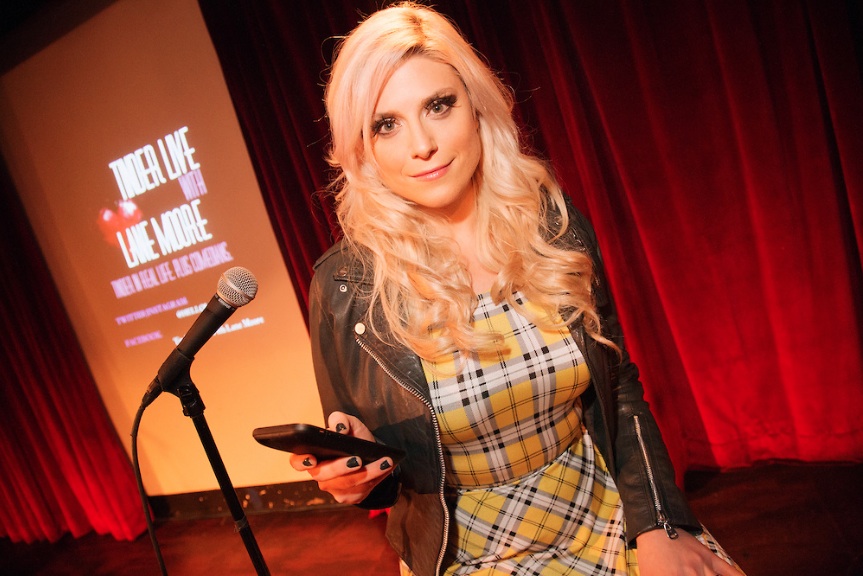 “Welcome to Tinder Live, where sadness comes to fuck.” That was my introduction to comedian, writer and musician Lane Moore and her blisteringly hilarious show, Tinder Live. It may also be the truest sentiment ever spoken about the addictive, slightly destructive and utterly inescapable dating app.

“Maybe this awful Tinder guy is just really bad online and we’ll have a great story about how I initially hated him but then it worked out!’”

In Tinder Live, and in her comedy in general, Moore deftly highlights the absurdity of everyday life, with just the right touch of self deprecation. One of my favorite examples of this is a recent tweet: “it’s so crazy how you always run into your ex on days when you’re outside their house every day.” Like a comic alchemist, Moore takes the experiences we’d normally be tearing our hair out over, and turns them into hilarity.

Brooklyn has become fertile ground for comedy over the last decade, from the dearly departed Big Terrific and Hot Tub, to new standbys like Night Train with Wyatt Cenac, Sunday comedy at the Knitting Factory, and any number of shows, both one-off and regular at venues like Union Hall, The Bell House, and Littlefield. And this only scratches the surface of the stand-up, sketch, and improv options you can find in the borough on any given night. Moore is solidly in that nexus, as well as tapping into the rising tide of celebrated funny women like Amy Schumer, Tina Fey and Amy Poehler, and gaining more praise with each new project.

Named #13 on Paste Magazine’s 75 Funniest People on Twitter (among other accolades), this Brooklynite has, by her own count, “like 35 careers,” and is jealousy-inducingly good at all of them. Moore plays guitar (and any other instruments she can get her hands on) and sings in her band, It Was Romance and is the sex and relationships editor at Cosmopolitan.com, in addition to being a comedian, actor and producer.

She’s certainly been at it for a long time. At age 10, a time most of us were struggling with the social politics of slumber parties and tag at recess, Moore was honing her stand-up powers. As she explained via email, “My Sunday School teacher gave me 10 minutes at the top of every class to tell jokes. Probably because she knew if she didn’t, I’d just interrupt her the whole time to tell them anyway. I don’t remember ever bombing, but to be fair, I really knew my audience.”

These days, Moore is pouring that same energy into a variety of projects, including working on a new music video and tour for It Was Romance, a new Tumblr called Male Feminists of Tinder, which calls out all those men who desperately want a gold star for simply agreeing that women are humans, more stand-up shows, and even taking Tinder Live on the road.

Moore created Tinder Live at the same time she started using the ubiquitous dating app. As soon as she signed up, Moore and her roommates began filming their experiences as they sat around swiping because she was, “just really interested in all of the different ways that people were awful or sweet or awkward or angry or confusing or their photos were bizarre.”  She no longer uses Tinder for her own love life, citing the show as the reason.

While Moore agreed that dating in New York often feels like a series of job interviews, improved only by the addition of whiskey, she also told me, “I’m still an optimistic person overall, so there’s still a part of me that’s like ‘Maybe someone will come up to me after the show and they’ll be the coolest!'” She also hoped that, “Maybe this awful Tinder guy is just really bad online and we’ll have a great story about how I initially hated him, but then it worked out!’”

At her recent Bell House show, Moore introduced the panel of guests, which included actress Stephanie March, actor and improviser Scott Adsit, and comedian and actor Jon Glaser, and began swiping. The guests and the audience alike weighed in on whether Moore should swipe left or right, and coached her through messages that ranged from digressions into the politics of organ sales, to Moore pretending that she wasn’t from the U.S. and had never heard of sex.

In anyone else’s hands this could feel mean-spirited (who are we to say that posing with a baby is a terrible idea?), or perhaps like an invasion of privacy, but Moore makes it cathartic, a bracing comedic espresso shot. She proves that none of us have it together, but hey, we’re funnier and less alone for it. And as Moore told me in, “I always worked really hard and still work really hard to make sure it’s a positive show where, if the people on screen were in the audience, they’d still get laid after.”