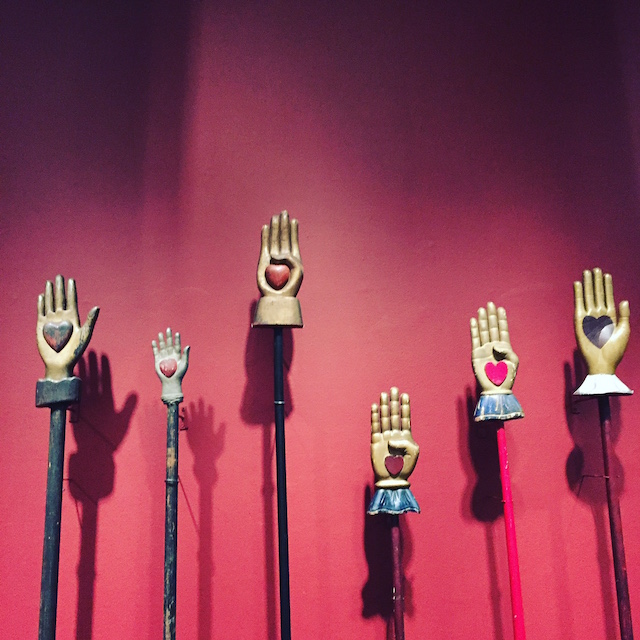 There may not be such a thing as a free lunch in NYC, but there certainly is no shortage of free art. Getting out of the cold with a family friendly activity for free is one of the few miracles of living here. Two weekends ago I took my 6-year-old son to the “Families and Folk Art” series at the American Folk Art Museum, a free interactive program that happens on the first Saturday of every month. Children ages 4-12 (and their adult) have the opportunity to tour the gallery and take a guided closer look at some of the art, followed by some hands-on artmaking inspired by an object at the museum. 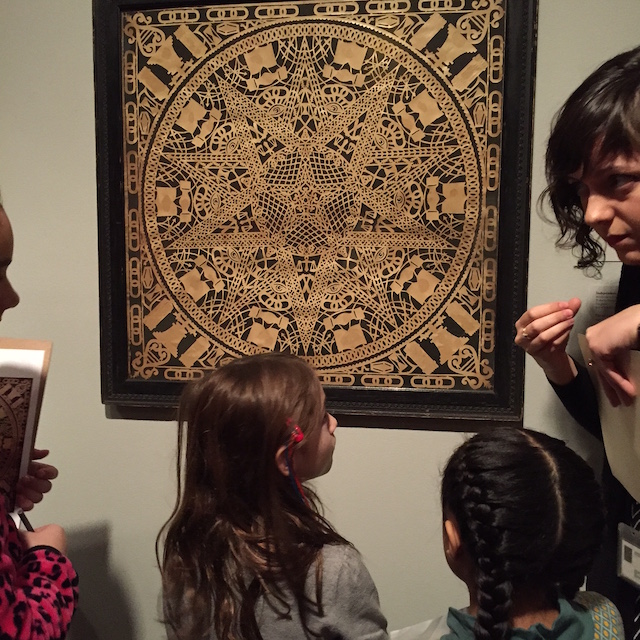 The programming helps kids get up close and personal with the art. Photo: Meredith Craig de Pietro

The current exhibit, “Mystery and Benevolence: Masonic and Odd Fellows Folk Art”, runs through May 8th. Kids seem to relate well to folk art, which encompasses art made by untrained hands, including indigenous cultures, tradespeople, and “outsiders.” This particular show explores art made by secret societies and includes lots of symbols, rituals and utilitarian objects like aprons and furniture. We took a brief walk around the small gallery before the program started, and my son pointed out all the hearts, arrows, and “eyeballs.” There was a carved stage on display that my son desperately wanted to act out a play on, but luckily the programming was starting. 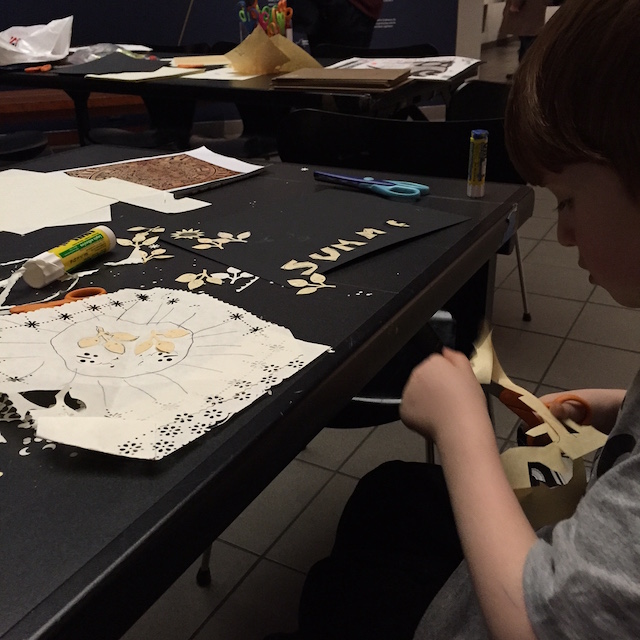 Our group huddled around an intricate example of “Scherenschnitte” art, which is German for “paper cuts,” an art form that uses scissors and other sharp tools to cut detailed patterns into paper (sort of like taking the paper snowflake craft to the next level). The kids pointed out symbols that they saw in the art, and then got a print out of it for an even closer inspection of “I Spy.” Finally, we went back to the tables where paper, scissors and loads of different hole punches were set up for playing with. The educators showed us how to use the materials, and gave us examples for inspiration, and then set us all loose with creating! Unlike many free family programs, this one only had four kids in attendance so there were more than enough materials and attention from the teachers. My son found his own way to do the project, which was less scherenschnitte and more straight-up-collage. But the staff gave him encouragement to create whatever was in his imagination, and didn’t even mind that he hummed Taylor Swift while he was doing it! (He liked his results so much that he later brought his project to school for show and tell.) Although the programming starts at age 4, it’s probably best suited for those who can use scissors and more tricky crafting supplies.

After all the hard work, we spent some time in the wonderful gift shop, and finished the afternoon by trying to decipher the universal sign for hot chocolate while waiting (seemingly forever) for our server at a nearby Le Pain Quotidien.

The next family program The Story Behind A Symbol will be April 2nd. (There is no program in March.) Space is limited; registration is required. Register by emailing: familyprograms@folkartmuseum.org