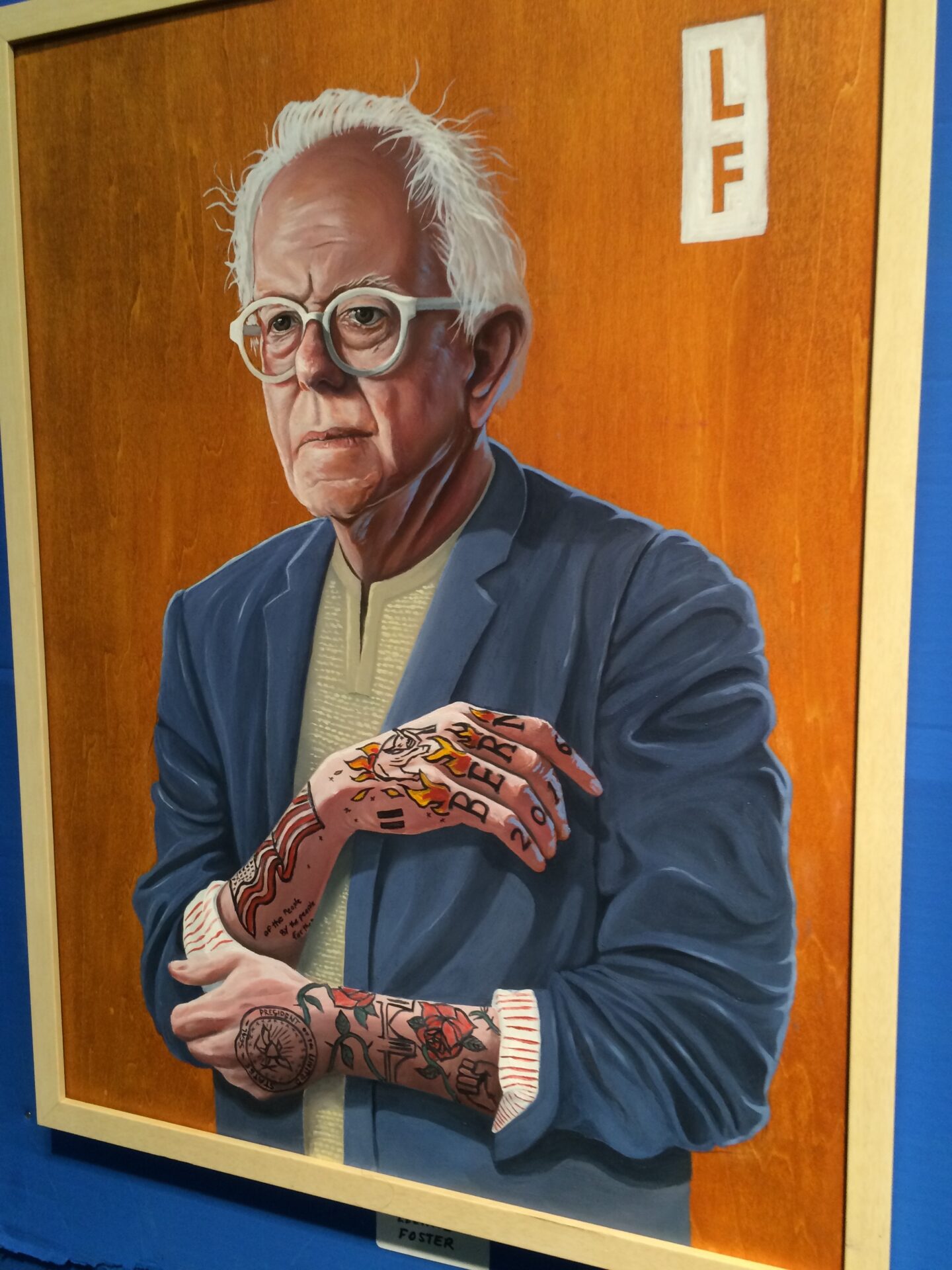 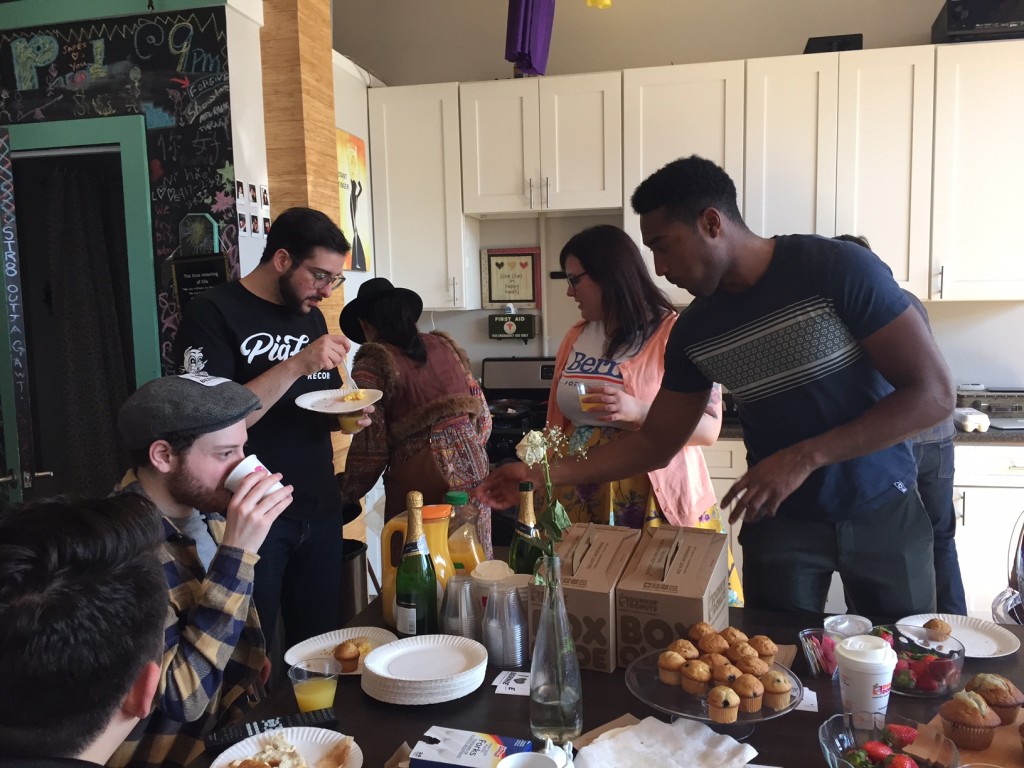 Civic engagement, it turns out, is best fueled by brunch. Or pizza. Photo: Erin Neff

Like many millennials across the city, the volunteers who gathered in a McKibben Street loft on Sunday enjoyed brunch together, a potluck spread that included eggs, bacon and mimosas.

“I think that he is mobilizing a generation that people tend to think is apathetic.”   –Lauren Irwin, 25

Unlike most brunches though, this was a prelude to a day of cold-calling voters in other states to plug Bernie Sanders before today’s Super Tuesday primary contests.

These were the Bushwick Berners, a grassroots group of Sanders’ supporters that has been holding phone banking events nearly every day for the past week, despite Sanders’ defeats in Nevada and South Carolina. While this was the first one that started with brunch, pizza and beer have also figured prominently as the fuel for their civic engagement. 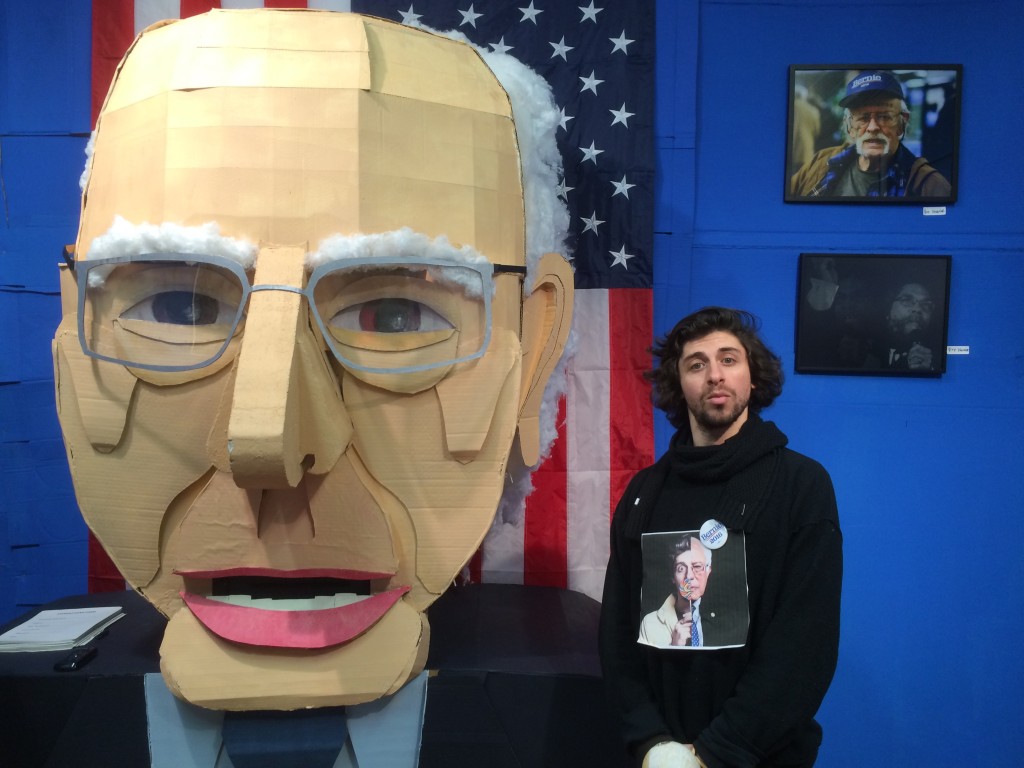 Matt Starr poses with the student debt-eating Bernie Sanders sculpture that was the centerpiece of the art show he organized in support of the Vermont senator’s campaign for president. Photo: Joel Wolfram

The Berners are part of a larger movement of Brooklynites in their 20s and 30s who, despite minimal experience in politics, are actively campaigning for Sanders. In Bushwick in particular, the scrappy and imaginative ways the pro-Bernie crowd is channeling its fervor for the liberal Democratic candidate—from a last-minute art fundraiser at a local gallery to screen-printed Bernie T-shirts that have gone viral—bear the DIY signature of the borough.

Steve Panovich’s campaigning began when he silk-screened slogans like “Bernie is Bae” on scraps of canvas to make the kind of patches cool, artsy kids fasten to their backpacks with safety pins. Asking for $2 donations, the 36-year-old artist’s assistant quickly raised $170 from the patches at a party he hosted last summer in his Bushwick loft.

Then, someone suggested that he print the design on a T-shirt. He quickly came up with other pop-culture-inspired slogans, like “No sleep til Bernie.” 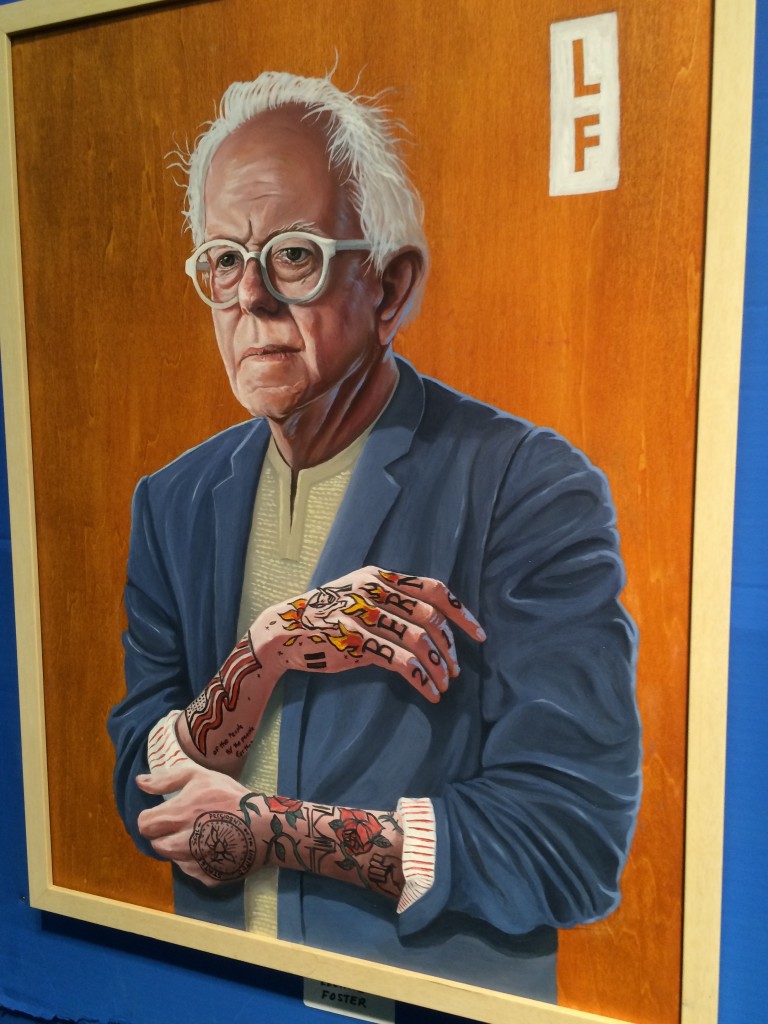 “It sort of snowballed,” said Panovich, who’s raised so much money selling the shirts he had to form a political action committee, or PAC, to comply with Federal Election Commission regulations.

Panovich’s T-shirt-powered PAC raised $2,991 by the end of last year, according to Federal Election Commission records (groups that raise over $1,000 are required to register as a PAC). His shirts, which he designs and screen-prints himself, have popped up in media coverage of the the Sanders campaign, including a New York Times photograph, and have shipped to “literally all corners of the U.S.,” as the packed envelopes piling up next to his kitchen table prove.

Panovich isn’t the only Bushwick creative turning his talents toward Sanders’ cause. Artist Matt Starr, 27, conceived a two-day Bernie-themed art show and fundraiser, Weekend with Bernie, that opened Feb. 12 at the Wayfarers gallery space.

“I was reading this book about Bernie and was just so obsessed and was, like, ‘well I don’t have a lot of money to donate but what else can I do?’” said Starr. “I have a lot of strong connections to really amazing artists.”

In the space of just three-and-a-half weeks he recruited artists from Brooklyn and around the country to contribute works inspired by Sanders’ cool-grandpa persona and leftie politics, he said. Featured works included a “launch a banker” video game, a portrait that imagined Sanders as an elder hipster with tattooed arms, and the centerpiece, a giant Bernie Sanders head that gobbled up student loan debt statements that visitors could fill out and insert into a paper shredder hidden inside its mouth.

While events like this might appeal primarily to those who are already “feeling the Bern,” Starr’s efforts have had an effect in the borough and beyond. Starr said that volunteers completed voter registrations for about 200 guests on Weekend with Bernie’s opening night, and that by the show’s second day, it had “sold a few thousand dollars worth of art,” all of which was donated to Sanders’ official campaign. 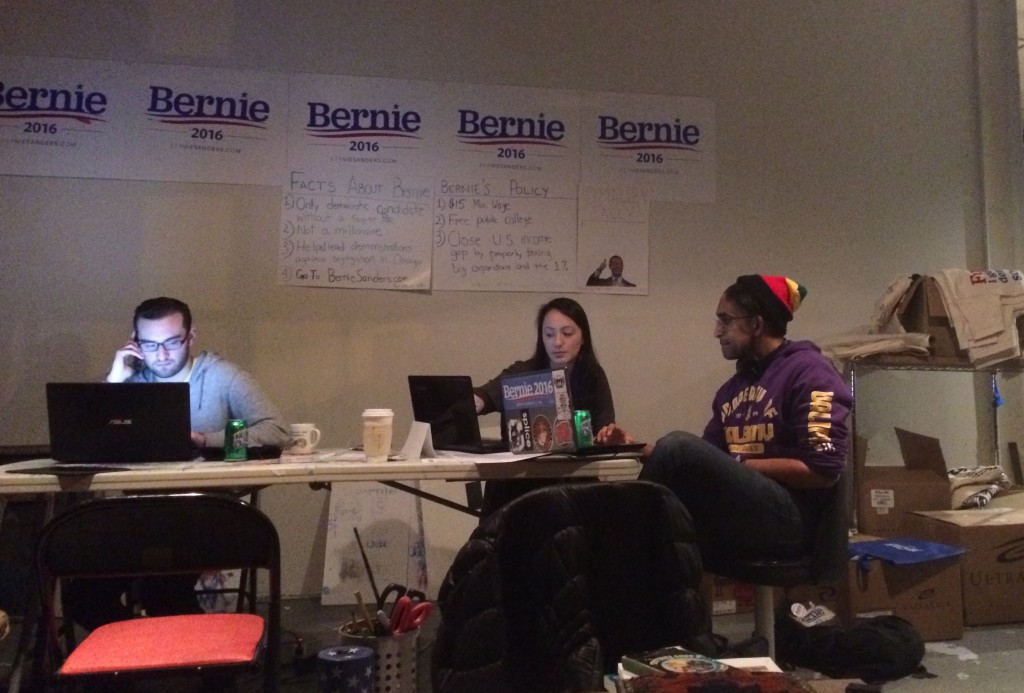 Phone banking is not glamorous work, even in Bushwick. Photo: Joel Wolfram

As for Panovich’s fundraising, he said he’s used money from his T-shirts and patches to pay for grassroots campaign materials to be distributed in Brooklyn neighborhoods like East New York and Crown Heights, a contribution of which was especially proud. Much of the money he’s raised, however, has gone to make more shirts, and to cover expenses.

“Most of it’s gone to pizza otherwise,” Panovich said.

Panovich is also affiliated with the Bushwick Berners and regularly hosts phone banking nights at his loft. Snacks, pizza and beer mainly, are usually provided, compliments of the PAC.

On a recent evening, a handful of young volunteers showed up at his loft to make calls to voters in Nevada, where the Democratic caucus was about to take place. Bernie campaign signs covered the length of an entire wall. Bernie T-shirts spilled out of cardboard boxes jumbled together in one corner of the common area.

“I look up to him,” said Lauren Irwin, 25, a copywriter at an ad agency and regular volunteer. “I think that he is mobilizing a generation that people tend to think is apathetic.”

Irwin said she was nervous about calling total strangers in a distant state. But, Sanders’ positions on issues like health care and climate change had motivated her to participate.

Many of the core members of the group didn’t know each other before getting involved with the Berners, but for them, it turns out, political activism and social life can go hand in hand.