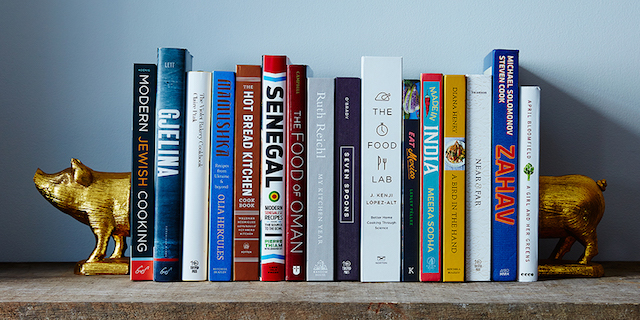 Who will win the 7th annual bracket-style tournament of cookbooks brought to you by community cooking site Food52? Find out at next Wednesday’s Piglet Party, where you can sample recipes from the contenders. Photo: Food52

Happy exceptionally warm and beautiful Wednesday, BBers! We hope that this busy workday affords you at least some opportunity to sneak outside and soak up some natural Vitamin D. You’ll need all the energy you can get, after all, because the week ahead is positively overflowing with stuff to get out there and do (and we aren’t even talking about the long bike rides or trips to the park that the weather has suddenly made possible).

Whether you are still paying down your astronomical student loans or you know a high schooler who is already freaking out about the absurdly stressful college application process, you might want to carve out time to see New York Times columnist Frank Bruni discuss his new book, Where You Go is Not Who You’ll Be, at the Brooklyn Public Library on Thursday night. Bruni’s thesis is that we have put far too much emphasis on the importance of attending a name-brand university, resulting in an admissions process that is expensive, anxiety-producing, and cruel, with a dubious payoff at the end of it all.

If just reading that stressed you out, treat yourself to a relaxing, meditative sound bath conducted by an integrative sound therapist at the brand new Brooklyn Yoga Club on Saturday evening. Or you can catch Brooklyn Based’s very own Nikita Richardson playing in the Brooklyn Conservatory Community Orchestra, who will be joined by acclaimed violinist Alice Ivy-Pemberton for a special performance of Ravel’s Tzigane that begins at 7:30pm.

On Sunday, get your fill of weird stuff at the Morbid Anatomy Museum’s Festival of Arcane Knowledge, a day-long program featuring presentations about offbeat topics like serial killers, dark tourism, and alchemy. (And just a few blocks away, our 8th annual wedding show, Wedding Crashers, will be underway with 80 fab vendors who will help you plan an amazing day.) Then, on Monday night, swing by The Bell House for a live taping of Crybabies, the Earwolf podcast hosted by Susan Orlean and Sarah Thyre that explores the music, movies, tv shows, and art that makes people cry. A slate of awesome guests for this installment, including Amy Sedaris, Eugene Mirman, Jon Glaser, and Ted Leo, means that it will probably sell out, so you should grab a ticket now.

Finally, while everyone is busy filling out their March Madness brackets, the home cooks among us can participate in the 7th annual Piglet Tournament of Cookbooks, a three-week-long, bracket-style competition orchestrated by food blog and community cooking site Food52. This year’s winner will be crowned at the 2016 Piglet Party, which takes place next Wednesday night in the Flatiron District. Tickets are available here, and include an array of dishes from the cookbooks that are vying for the title and appearances by many of the cookbook authors and other foodie luminaries like Adam Sachs, the editor-in-chief of Saveur.

But wait, there’s more! This Ideal Week presents loads of other potential activities to help keep you educated, entertained, and well-fed, so keep reading! 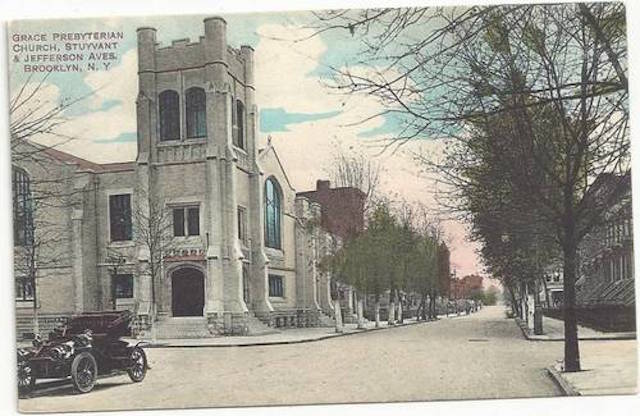 Take a deep dive into the history behind one of Brooklyn’s most rapidly gentrifying neighborhoods, Bed-Stuy, at ThinkOlio’s event at Berg’n on Thursday night. Photo: ThinkOlio

Thursday, March 10 Whether you call it Bed-Stuy—or the more formal Bedford-Stuyvesant—there is a lot to learn about one of Brooklyn’s oldest and most architecturally interesting neighborhoods. This Thursday night, drop by Crown Heights beer hall and food court Berg’n for Bed-Stuy, A Rich and Storied History, the latest teaching moment from locally-grown educational events startup Think Olio. Designer and architect Morgan Munsey will lead a discussion touching on everything from the arrival of the Lenape people to the landing of the Dutch to an exploration of the neighborhood’s rich African-American history and its current, rapid evolution. Tickets are $12; “class” begins at 7:30p.m. –N.R. 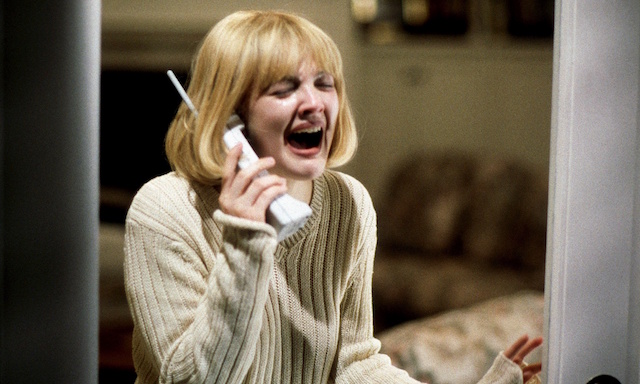 Watch Drew lose her shit all over again at a special 20th anniversary screening of Scream at BAM on Friday night. Photo: Dimension Films

Friday, March 11 Believe it or not, 2016 marks 20 years since the genre-shattering release of Wes Craven’s satirical horror classic Scream. And we can’t think of a better way to celebrate the film’s lasting legacy than by watching it for the first (or umpteenth time) on the big screen at BAM, with a special introduction from WNYC’s Sean Rameswaram on why Ghostface’s irony-tinged killing spree makes for “one of the most influential pieces of filmmaking in horror history.” Tickets are $14 for general admission and $7 for BAM members; the terror begins at 7:30pm. –N.R. 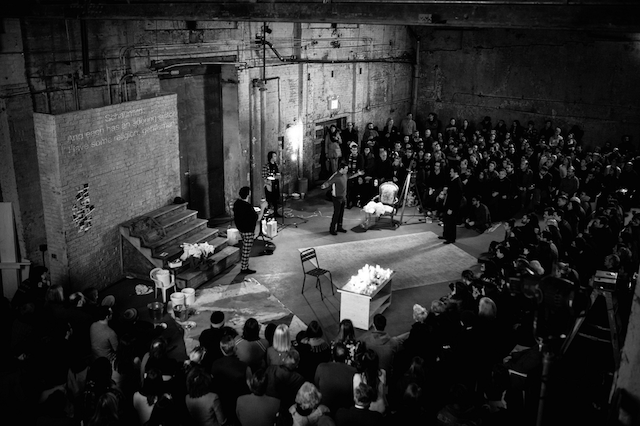 Saturday, March 12 If you’re looking for an posher-than-average Saturday evening activity, make a date for the opera (no mink stoles or fancy magnifying glasses necessary). LoftOpera, the organization dedicated to making traditional opera affordable, young, and cool again, is producing its seventh full-length production, Giacomo Puccini’s emotionally-charged Tosca, this week. There are six performances scheduled between March 10 and March 19, and each starts at 8pm at 198 Randolph Street in East Williamsburg. At just $30 a pop for a ticket, this is one of the best high-culture bangs for your buck in the city. –K.H. 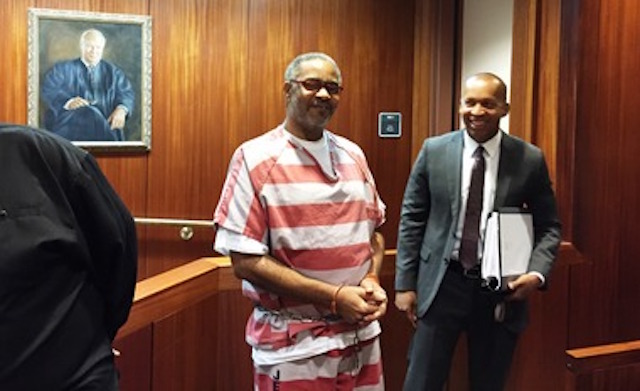 Anthony Ray Hinton served 30 years on death row before being exonerated due to the tireless work of lawyer and equal justice advocate Bryan Stevenson. See both in conversation at a special panel at Brooklyn Museum on Sunday. Photo: eji.org

Sunday, March 13 Bryan Stevenson, executive director of the Equal Justice Initiative, dedicated his career to fighting for the wrongfully convicted, long before pop culture phenomena like Making A Murderer and Serial had everyone discussing the systemic flaws in our criminal justice system at the water cooler. He also happened to be my professor for a life-changing capital punishment seminar over a decade ago, so I can speak first-hand both to his infectious passion about criminal justice issues and his extraordinary abilities as an educator. On Sunday afternoon, Stevenson will appear in conversation with Anthony Ray Hinton, an innocent man who spent nearly 30 years on death row in Alabama before he was finally exonerated last year, at the Brooklyn Museum. The talk is part of an ongoing series at the Sackler Center entitled States of Denial: The Illegal Incarceration of Women, Children, and People of Color; it’s free with museum admission and starts at 2pm. –K.H. 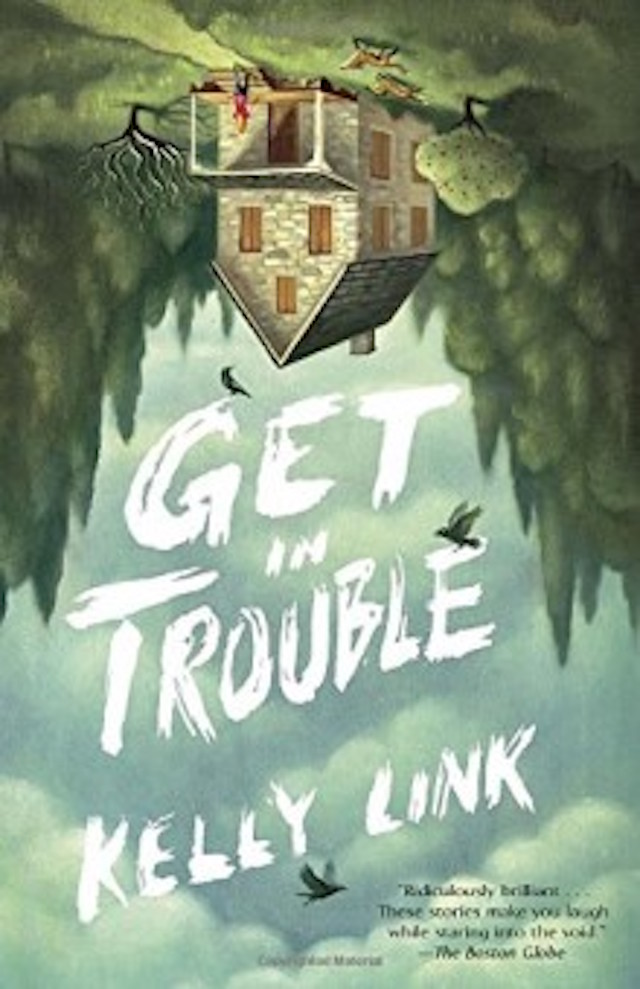 Kelly Link will read from Get in Trouble, joining a crew of fellow writers who will celebrate the Franklin Park Reading Series’ seventh anniversary on Monday night. Photo: Kelly Link

Monday, March 14 Crown Heights’ Franklin Park is not just a great bar, it’s also one of Brooklyn’s bona fide literary hotspots. This Monday evening, bookworms from all over with gather to celebrate seven years of the bar’s storied Franklin Park Reading Series, which has brought great local and not-so-local authors to share their work since 2009. Drop by to hear readings from Kelly Link, author of the critically-acclaimed 2015 book, Get In Trouble; New Republic contributing editor and educator Alexander Chee; Guggenheim Fellow John Wray; short story writer Rachel Cantor; and first-time novelist Cote Smith. In between readings, there will be birthday cake, book raffles, and, as always, good beer on the cheap. Admission is free but space is limited, so be sure to arrive well before the party kicks off at 8pm. –N.R. 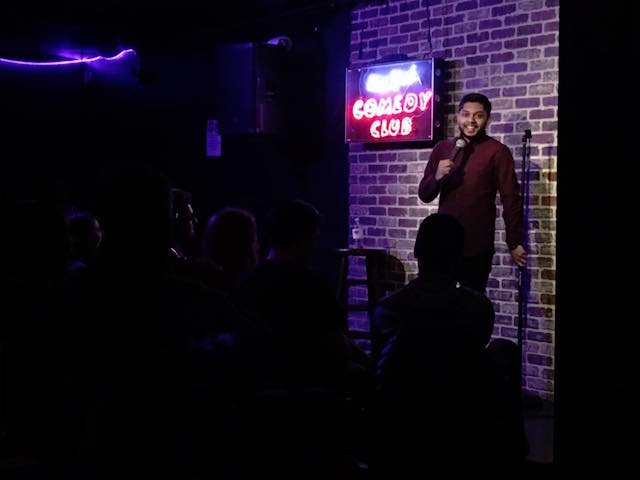 Tuesday, March 15 Tuesday night marks the first edition of a brand spanking new standup comedy show called Inside Jokes, which premieres at Bushwick’s Pine Box Rock Shop at 8pm. Hosts Mahesh Kotagi, Christopher Hamilton, and Joe Russell will be joined by a slew of hilarious comedians that you might recognize from places like Last Comic Standing and Inside Amy Schumer. No cover, and if you want to get good and loose beforehand you can hit up the happy hour specials at Roberta’s Tiki Bar around the corner starting at 5pm. –K.H. 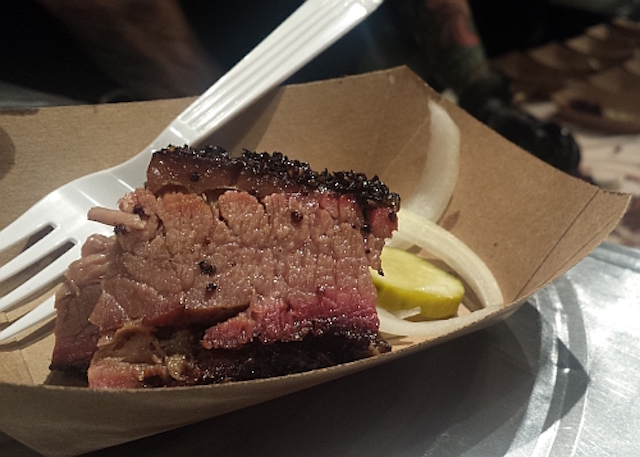 Mmmm. . . brisket. . . Get some and see who is judged to be the best in NYC at the annual Brisket King competition on Wednesday night. Photo: Brisket King NYC

Wednesday, March 16 It seems like New York City’s appetite for barbecue is insatiable, and what better way to test that theory than with a massive all-you-can-eat brisket festival featuring a killer lineup of butchers and chefs from over 20 of the area’s most popular smoked meat purveyors? That’s right, this Wednesday night Sanders Studios will be hosting the people who put places like Marlow and Daughters, Dickson’s Farmstand Meats, and Mable’s Smokehouse on the map, and J. Fox of Hudson & Charles will do a live butchering demo of an entire beef shoulder. The “Battle of the Meats” known as Brisket King is back, and with it your chance to see judges crown this year’s title winner and sample all the competition’s entries while you are at it. Tickets aren’t exactly cheap at $90 each, but that includes three-and-a-half hours of all-you-can-eat bbq and all-you-can-drink craft beer and indie spirits. –K.H.