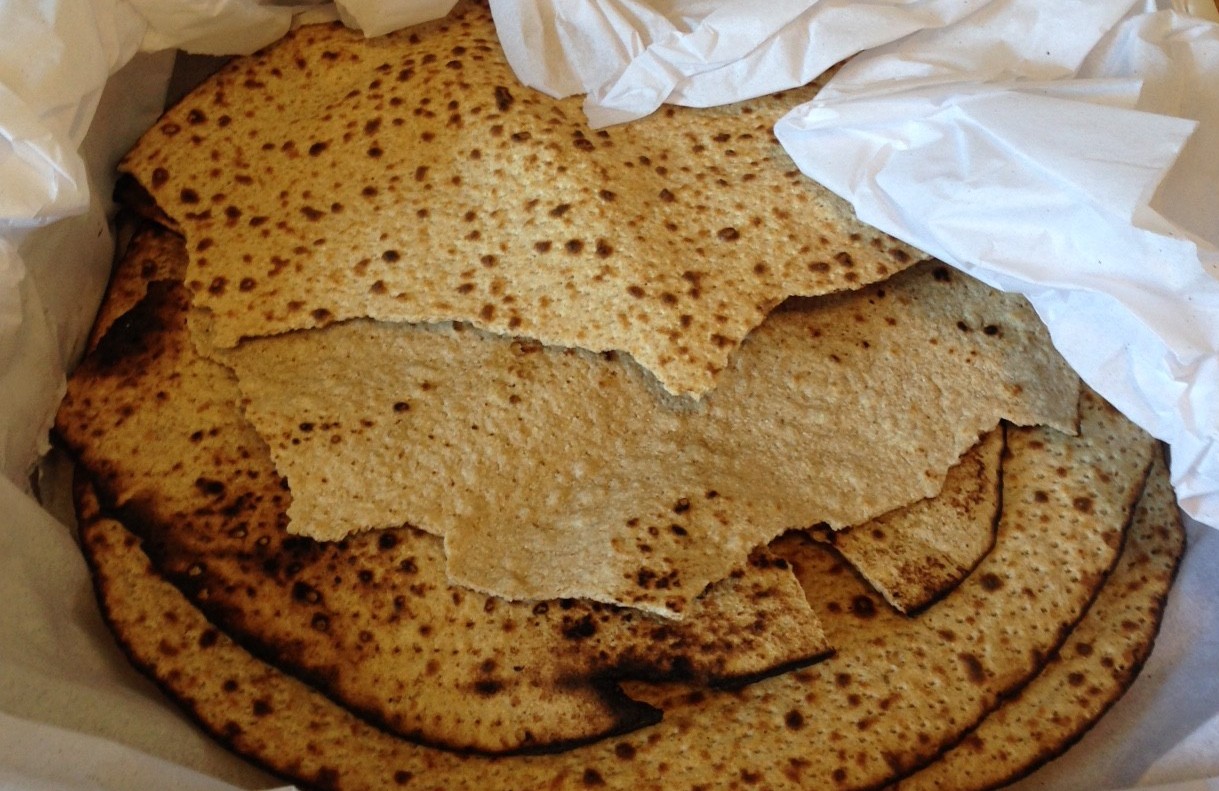 Matzo, it seems, is having a moment. Yes, Passover begins on Friday, so matzo has appeared on supermarket shelves, alongside other seder trappings like horseradish, but this year the unleavened cracker has inspired much more consideration than usual. Dan Barber, chef and local food advocate, had a long essay in The New York Times this weekend about what goes into making shmurah matzo. Last Friday, The Matzo Project released their first, and for now only, batch of artisanal matzo to a few select stores in Brooklyn and Manhattan. It sold out the same day.

It’s not just that we’ve reached such a fever pitch with food that we’re fascinated by the minutiae of even an item that traditionally has been most remarkable for its blandness. Matzo has the ability to simultaneously function as delicious cracker at your cocktail party and as a symbol of Jewish history and culinary heritage. Try to achieve that with a box of Triscuits.

The Matzo Project launched with a small run of three different types of matzo and sold out in one day.

Ashley Albert, Matzo Project co-founder, is perhaps the biggest advocate of the idea that matzo should become your new favorite cracker. “When I have a party, I get a pita chip for the hummus, a tortilla chip for the guacamole and a water cracker for the goat cheese, but you can use a matzo chip with ALL THREE,” she says. The Matzo Project is in search of a permanent home, but by next Passover Albert hopes to be in your local cracker aisle.

Kosher matzo is made only from water and flour (acceptable flours include wheat, spelt and kamut), with no salt, and is unleavened to represent the Jews’ flight from Egypt, which took place with such haste that their bread did not have time to rise. I ordered a box from Lubavitch Matzah Bakery, which bakes shmurah matzo in Crown Heights, observing the most stringent religious rules. You really notice the lack of salt when you eat it plain, but with anything only top, like hummus or goat cheese, it is a surprisingly great, if slightly shatter-prone, cracker. Jayne Cohen, Jewish food historian and matzo lover, said that after touring a shmurah bakery, and sampling matzo straight from the oven, she started adding olive oil and salt, and maybe a little rosemary at home, and then popping them back in a hot oven for a few minutes.  “They were delicious, very hot, wheaty and toasty,” she says. “So now I heat them up for better flavor. It’s a very elemental cracker, just flour and water.”

While the concept of matzo as a cracker, and a flavored one at that, is new to the U.S. market, Cohen says that’s old news to the French. 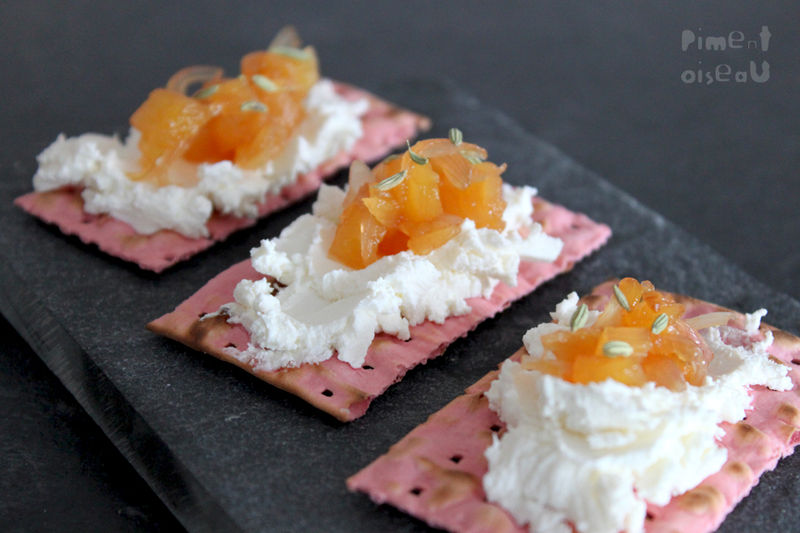 “In France there is a mazto maker that is 100 years old, Paul Heumann, that makes unleavened crackers for everyday use from kamut and spelt, with flavorings like tomato and chestnut,” says Cohen. “You can find it in the big food section of the department store Bon Marche, and in the cracker department at the grocery story. The French food blogger Piment Oiseau, made an hors d’oeuvres that she called ‘tres girlie’ using their pink matzo, which is flavored and perfumed with beet juice, plus fromage frais and pineapple chutney.”

As a physical manifestation of the Jewish diaspora, matzo takes many forms around the world, including softer versions that use more water and come out more like flatbread than crackers, often found in Sephardic and other non-Ashkenazi traditions, Cohen says. Traditionally, matzo was only eaten during Passover, and was usually handmade by poor women or widows as way to earn a living. The process became mechanized in the early 20th century as companies like Manischewitz and Goodman’s Matzo, which started out in Pennsylvania and then moved to New York City, started to produce it in factories.

“Once it was made in quantity it became more of a year-round product,” says Cohen. “Goodman noticed that people would buy extra boxes to keep after holidays.” It was this surplus that led to familiar Jewish comfort foods like matzo ball soup and matzo brei. Italian Jews have long made a lasagna using matzo moistened with water or stock in place of noodles (there’s even a Martha Stewart version), and mina, a vegetable and matzo pie from Sephardic cuisine, has found its way onto Gwyneth Paltrow’s menu. A chocolate-caramel matzo crunch  has become a popular unleavened Passover treat–The Matzo Project has white and milk chocolate versions made with pecans.

The possibilities for matzo stretch beyond the culinary. 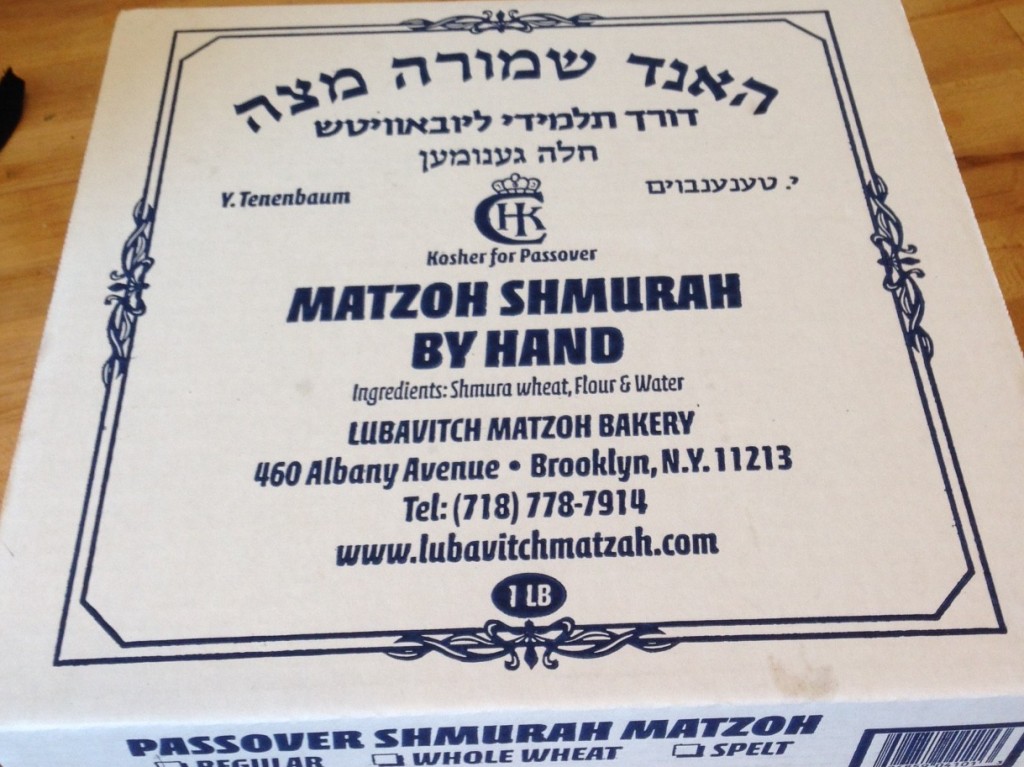 Shmurah matzo is made in accordance with strict Orthodox rules.

Cohen says that some Christian congregations use it as the Eucharist, in the belief that it most closely approximates bread that Jesus would have eaten. She also noted that when Manischewitz was founded in Cincinnati, Ohio in 1888, their customers were not limited to the Jewish community. “It was a great substitute for hardtack,” she says. “Many non-Jews took it on pioneer-type trips into the West because it couldn’t go bad.” Some modern day preppers also stock up on matzo because of its longevity on the shelf–or in the fallout shelter.

Cohen assured us that although matzo is a food that is part of the ritual of Passover Seder, there are no rules forbidding non-religious consumption that she is aware of.

Albert says that in the process of researching and learning to bake matzo, she, as a mostly non-observant Jew, found a new sense of community, which while not religious in nature feels important to her. “I reconnected to Judaism in an interesting way that I didn’t anticipate,” she says. She suggested that the recent resurgence of Jewish delis in New York City is about celebrating tradition and identity through food, in an inclusive way.

Cohen echoed that sentiment, “Food tells the story of Jewish history and life, and it’s wonderful thing to share with other people, whether they share the religion or not,” she says. “People who dismiss what you might call ‘kitchen Judaism,’ that’s ridiculous. Religion is a celebration of life and finding your own way to celebrate life with food is wonderful.”