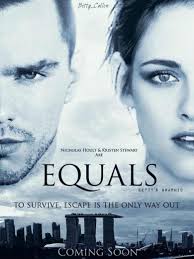 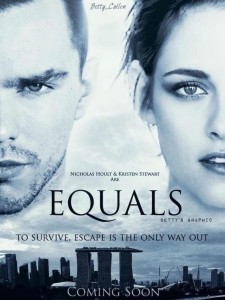 It almost seems that writers and filmmakers have grown weary of weaving stories around human emotion—they’re become more interested in crafting worlds devoid of it. In Drake Doremus’ third feature film, Equals (which stars Kristen Stewart and Nicolas Hoult), we’re invited into a place called The Collective. The Collective is an idyllic society—its people (who are called Equals) go about their various jobs, eat nutritious meals, take a lot of showers, go to sleep, wake up, and do it all over again. They do all of this, always, with unwavering composure and pleasant attitudes—they’re a new breed of humans who have no emotions, and therefore exist in a mechanized world free of violence, depression, or any troubles at all.

Silas (Hoult) is a young Equal who works as designer. He lives a sterile, normal life until he’s infected with SOS (Switched-On-Syndrome), a cancerous disease that activates a whole slew of emotions in people who have been bred to survive without them. In The Collective, SOS usually leads to suicide, or being shipped off to a mysterious clinic called The Den, where it seems people die anyway. It’s not long before Silas notices that his co-worker Nia (Stewart) shows signs of being infected as well, though she’s able to hide it, a difficult survival tactic. After a montage of inquisitive glances that quickly turn into palpable longing, Silas and Nia embark on a lustful, forbidden romance, often conducted in the dreamy neon lavatories where everyone is reduced to silhouettes. It’s not just skin they’re after—it’s more of an all-consuming desire to, well, be human, in all the ways we were meant to be human.

That’s really the gist of plot. It’s a futuristic riff on Romeo and Juliet with notes of Gattaca and The Island, in which the only chance two lovers have of being together is a high-stakes escape from their surroundings and all those who want to keep them apart. Equals feels empty in that sense, a tired story that doesn’t throw anything new into the mix, hard as it tries. Hoult and Stewart give solid performances (probably because the dialogue is relatively minimal and the pair is pretty to look at) and employ decent chemistry, but are simply not given enough material.

Where this film nails the mark is in its fantastic design elements. Shot mostly in Japan, Equals is a cooling rush of sleek architecture, minimalist apartments that function more as living pods (where the beds and racks of clothing fold up and away into the cream colored walls), and luscious gardens sliced by steely walking bridges. A Muji wonderland of sorts, one that’s unfortunately more interesting than the film itself.