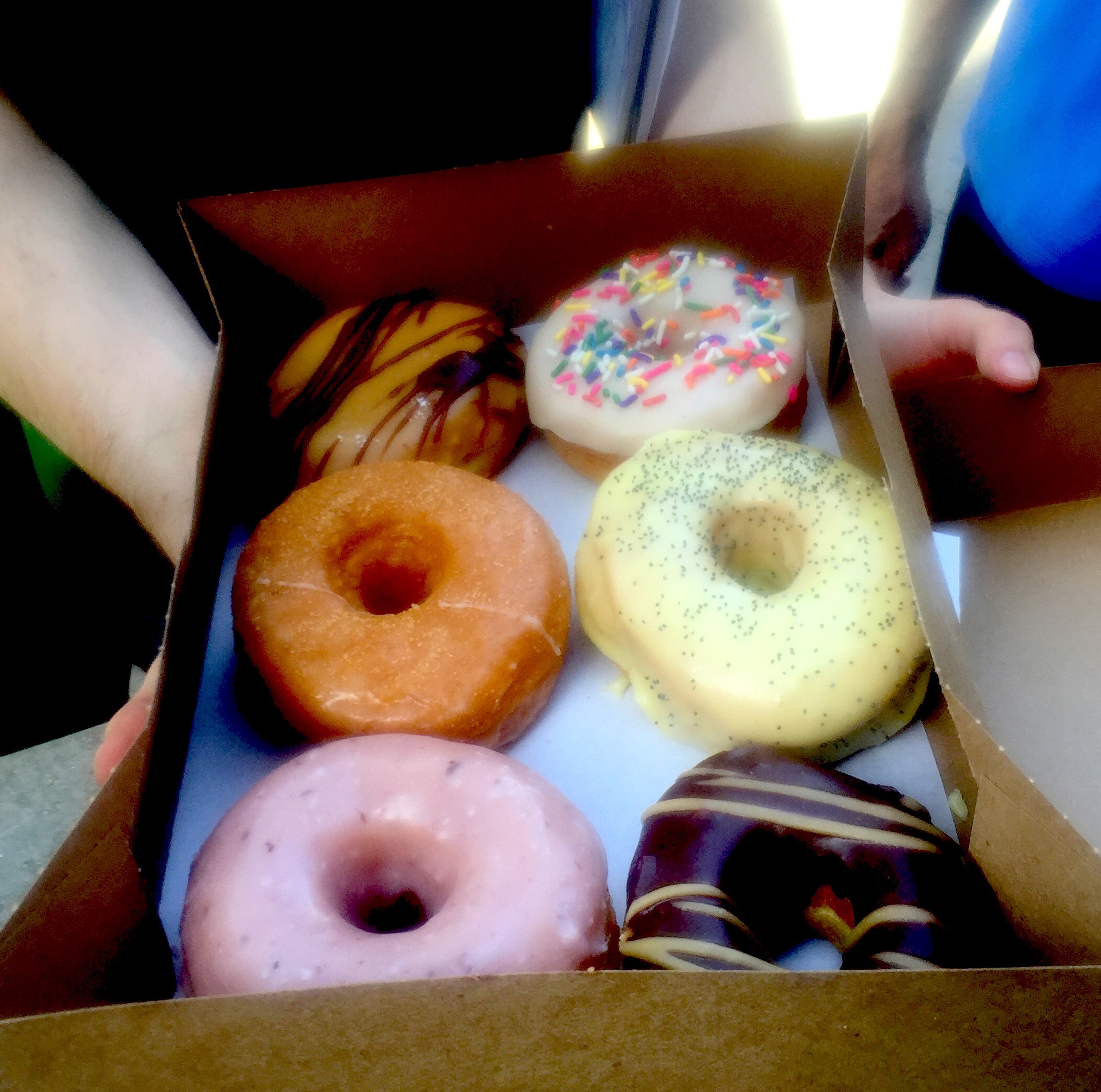 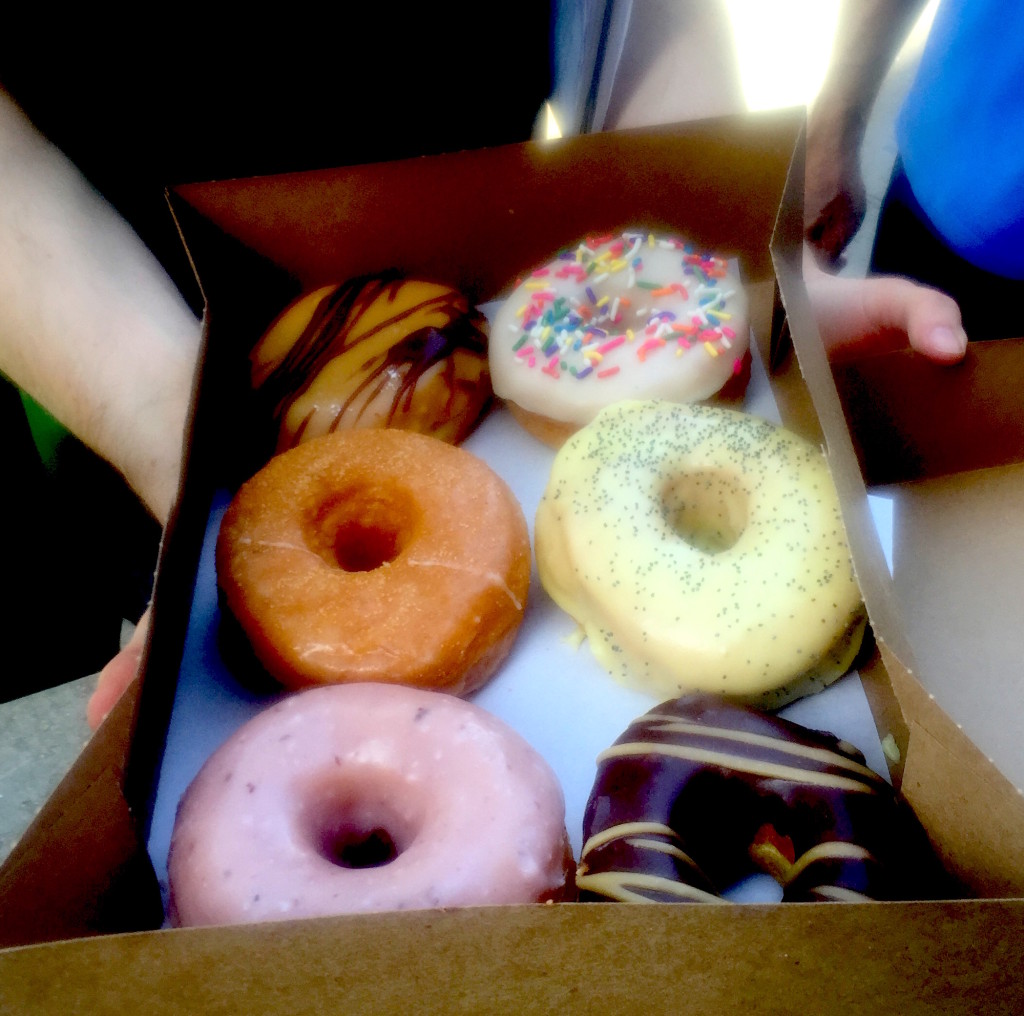 You wouldn’t know by tasting them, but Dun-Well doughnuts are vegan. Photo: Kathleen Wong

How do you really get to know a place? By tasting it.

At least that’s how I got better acquainted with Bushwick on a recent Saturday. I was part of a group of seven people who congregated by the Jefferson stop on the L train, to embark on Brooklyn Nosh’s inaugural Bushwick tour. Colin Levin, founder, led us to the neighborhood’s best treats, and more than a few murals and other works of art, on a three-hour, three-mile tour.

“I love the idea of walking and really getting to know a small area and getting to see all the art, and it’s really important that we get involved with the community,” Levin told me. An opera singer as well as a Brooklyn tour guide, Levin started the company in 2015, and will be offering tours in Greenpoint, Williamsburg and Bushwick this summer, with plans to add Red Hook as well. Come fall, he’ll add Sunset Park, Bed-Stuy and Atlantic Avenue to the mix, as well as crafting vegetarian, vegan and kosher versions of each tour.

Levin’s goal is to really delve into the character of the neighborhood, bite by bite. “I try to only go to places that have one location, with very few exceptions,” he explained in an email.  “The business cannot have another branch in another borough, as it needs to be Brooklyn-based. I next look for places that have an emphasis on local, seasonal, and from-scratch products. Quality is of course really important! Finally, I choose places that the owners/chefs have a real love for food culture, and are kind to the guests on the tours. I also make note if a place has excellent vegetarian, vegan, gluten-free, and kosher selections, as I try to accommodate those options as much as possible on the tours. I can confidently say that a vegetarian can eat at almost every single vendor, and vegans a high percentage as well.”

Levin explained to our group that almost all the places we were going to visit had opened in 2012 or later, a pattern that speaks to a larger trend in the neighborhood. “Compared to the other tours, the Bushwick tour definitely is the one that continues to be in flux, but truthfully, that’s part of the fun of working on it,” he said.

The first stop was Mexicana Los Hermanos, the only stop that opened before 2012. (It opened in 2006.) Inside the restaurant-tortilla factory hybrid, we sampled tacos with carnitas or chicken. While delicious, we didn’t learn much about it, or tortilla making, which seemed like a missed opportunity, considering it was the most rooted in Bushwick of any business we visited.

Next we wandered through the Bushwick Collective, which Levin called “one of the most innovative areas in all of New York for street art.” The large scale, dynamic and very often trippy pieces that make up the Collective are by artists from all over the world, depicting everything from wolves to Martin Luther King, Jr. 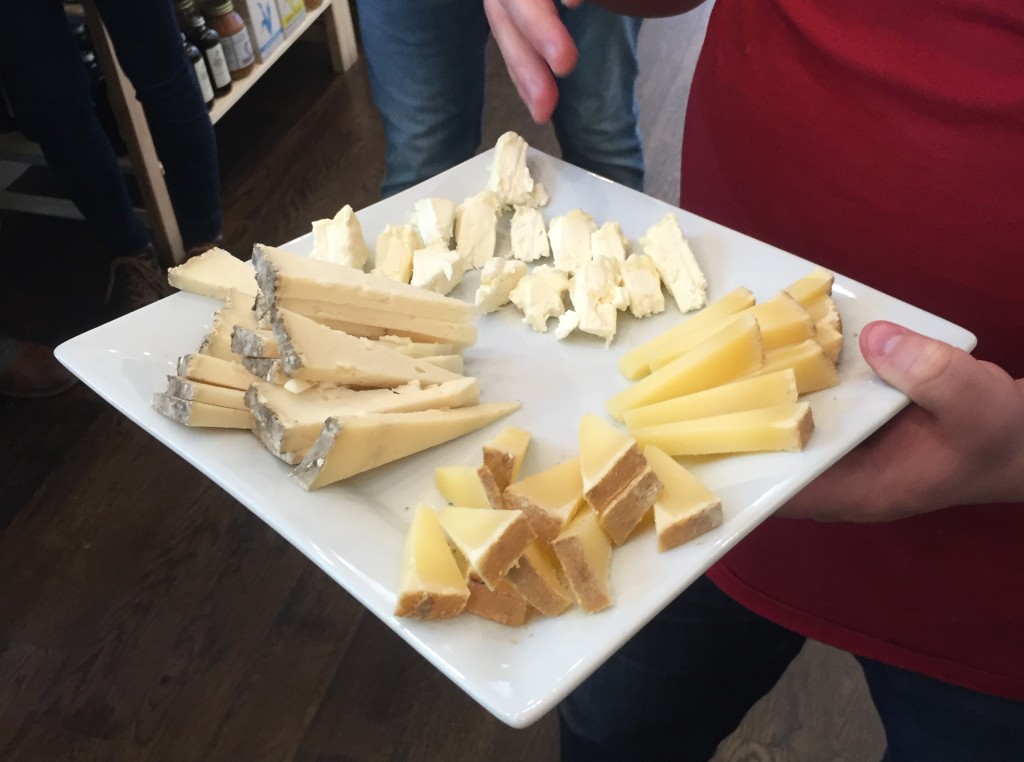 After art-viewing, we made our way into Foster Sundry, a sunlight shop with a cheese counter, a butcher counter and a perfectly-curated selection of goods straight out of any foodie’s dreams. We tasted a few different handmade local cheeses, one made of buffalo milk and one from New York State called Dutch Knuckle. Hops and Hocks, a veritable craft beer-lover’s candy shop, was next. Craft beer, meat, and snacks like popcorn with nutritional yeast are all on offer, though we were there to taste the kombucha, a tangy strawberry sage version and a jasmine concoction.

Vegan everything has become mainstream, even trendy over the past few years, and many new food businesses in Bushwick sell animal-free versions of goodies that are traditionally meaty. We sampled delicious vegan bites from Momo Sushi Shack (fuki maki rolls), Dun-Well Donuts (a particularly zesty lemon poppyseed donut) and Bake Shop (cupcakes). We also visited Fine & Raw Chocolates, a small chocolate factory that produces hand-wrapped bars and truffles. I’m pretty sure their production floor is what heaven smells like.

We broke away from stuffing our eager faces for a few minutes for another dose of culture,  checking out Brilliant Champions, a tiny art gallery in an old car garage that showcases local artists.

Our last and final stop was Luckybird Bakery, which looks like it popped out of a magazine spread–which is basically the case since their cakes have been featured in the pages of Vogue. We all tried rosewater cake and cheesy scones, despite the general consensus of being beyond full (if you were wondering, the answer is yes, you get quite a lot of food on this tour).

By the end I felt like I has seen, tasted and heard what Bushwick has to offer–which is delicious, if occasionally off-putting. Some of the residents we saw on our stroll really played the Brooklyn hipster role to a tee, complete with dark sunglasses and pink hair. At times it felt odd to gape wide-eyed at the vastly changing neighborhood, like we were in some sort of exhibit explaining gentrification in real-time.

“It felt like I did a tour of the most gentrified area I had ever been to,” tour-goer Gloria Norton said. “It was sad and a bit uncomfortable walking past all the hipsters and still seeing the few small family businesses still that remained in an area that had been completely taken over.”

Levin though, takes the view that the area is fascinating precisely for its dynamism, and for the rapidly changing landscape of new food businesses ready for exploration. “I’ll be interested to see how I can expand the tour into the area going into Ridgewood as gentrification continues in the eastern part of the neighborhood,” he said.

There are two more Bushwick tours scheduled for May 21 and May 28. New tour dates for Bushwick, and other neighborhoods for June and July will be added to the site this week, Levin told us. Tours cost $50 per person.