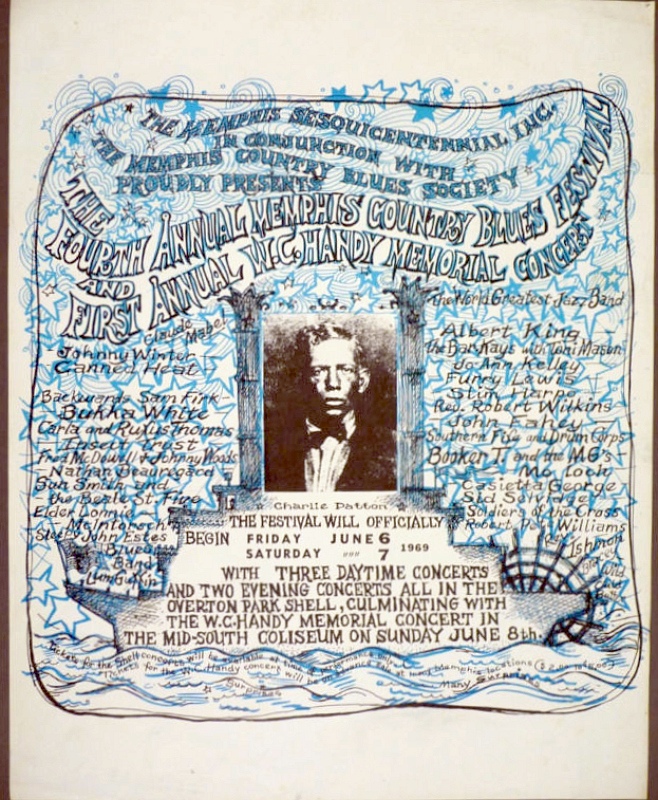 From the Newport Jazz Festival and Woodstock, to Live Aid and Lollapalooza, music festivals once held historical and cultural importance—before the dizzying array of acts, foodtrucks, and selfie-happy audiences took over. The Memphis Country Blues Festival, which first started in 1966, is not as well known as some contemporaries, but was equally significant. Though it had a brief four-year run, as an integrated music festival during the Civil Rights movement in a city renowned for its blues history, it was a crucial cultural touchstone for Southern musicians.

The festival–which received attention in the form of an album release by Sire Records and a TV broadcast–was the brainchild of a group of artists and musicians known as the Blues Society. This summer marks the 50 year anniversary of the first Memphis Country Blues Festival  and the collective is the subject of a new documentary in the works, The Blues Society, by Brooklyn filmmaker Augusta Palmer, who also directed The Hand of Fatima. This project will trace the history of the Society and the festival featuring blues men Fred McDowell, Rev. Robert Wilkins, and Bukka White, as well as others involved in the festival like Jim Dickinson, Nancy Jeffries, and Sid Selvidge.

The  filmmaker launched a Kickstarter campaign to finance the filming in Memphis this summer. “Since the first of these events took place almost 50 years ago,” she wrote, “it’s urgent that we do interviews with people who were there and search for archival materials that will help us tell this amazing story.” (Palmer has a personal  interest in this project; her father, the late and great music writer Robert Palmer, was one of the members of the Blues Society.) Judging by the documentary’s preview trailer below (which features some  archival footage and interviews, including with esteemed writers Robert Gordon and Peter Guralnick), this is definitely something worth getting behind on, especially for blues fans.

To find out more about The Blues Society and how to donate, visit the Kickstarter page. The campaign, which features various incentives for donations, needs to raise $35,000 by June 1.