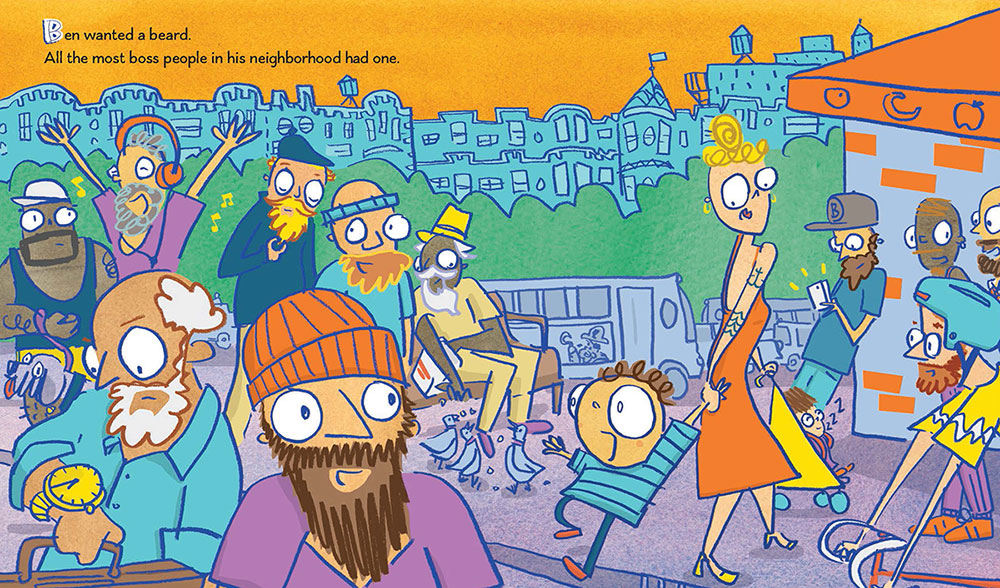 When illustrator Steven Weinberg was a contributor to Brooklyn Based, his bio identified him as “one on the many tall and bearded young men hailing from Brooklyn, NY.” Weinberg is still bearded, but he now hails from the Catskills, where he co-runs the Spruceton Inn, a “Bed and Bar” with his wife, and regularly illustrates children’s books. His most recent book draws upon his fondness for facial hair: Beard Boy, by John Flannery.

Just as Knuffle Bunny strikes a chord for Brooklynites who get to see their beloved brownstones, Prospect Park and Grand Army Plaza on page, Beard Boy delivers the same sweet sense of familiarity. “Ben wanted a beard,” it begins. “All the most boss people in his neighborhood had one.” Weinberg sets the initial scene with all the markers of Brooklyn: water towers, buses, pigeons, brownstones, a dude in a Nets cap, and of course the “bodaciously bewhiskered” men who little Ben wants to emulate.

He is something of an aficionado. The best baker in town has a “short boxed beard,” his friend Bobby’s dads rock “boisterous beards,” and he spots a “stacheburn”–something he’s never seen in person. Against his hot, tattooed mom’s wishes (I swear I spent time wondering whether she was the sitter), he interrogates anyone on the street sporting a beard about their upkeep–a Hasidic man, an Islander (the NHL kind), a police officer, a pizza delivery man. He’s obsessed, it turns out, because he wants to be just like his dad. No amount of consoling from his father stops him from attempting to grow one, and his alone time with a permanent marker doesn’t go over too well.

Even in a house where a five-o’clock shadow never appears, Weinberg’s very playful style of drawing and Flannery’s alliterative writing make this a fun read, particularly as Father’s Day nears. And for those who are in fact bodaciously bewhiskered, it will be an even bigger hit.