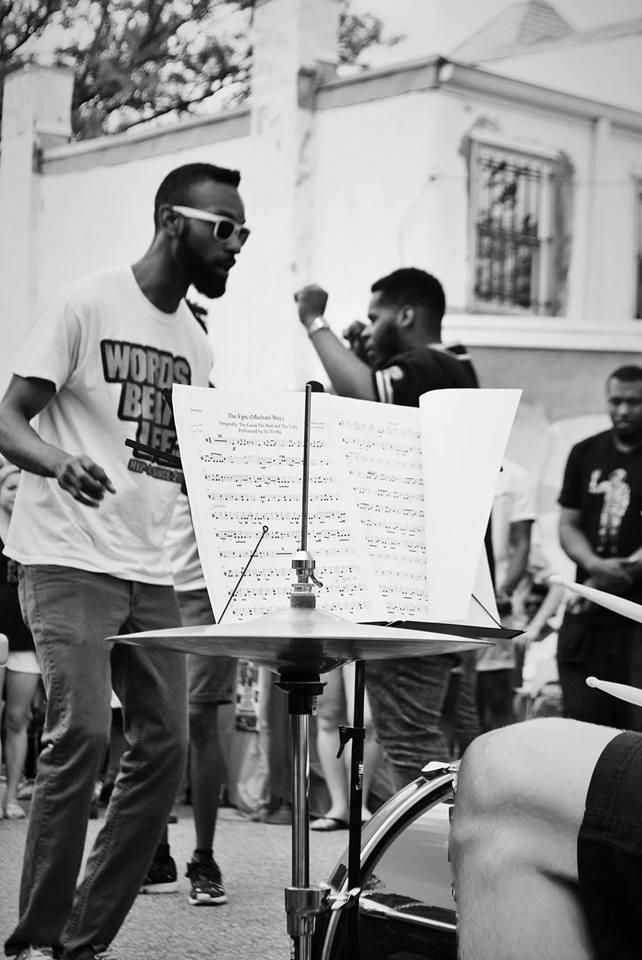 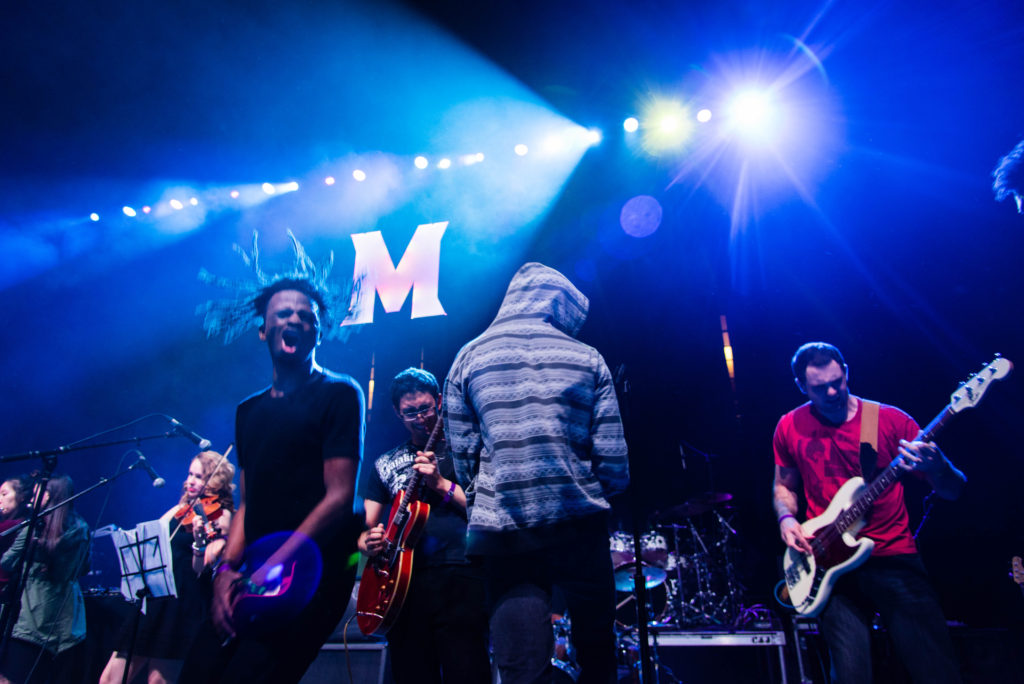 The HHO performs at Art Attack at University of Maryland, 2016. Photo: FRNVR

The Hip Hop Orchestra is a performance group of University of Maryland students and alumni whose mission is to explore the connection between orchestral music and hip-hop –and to prove that orchestral music is as dope as hip-hop is fine art. Marcus Moody,HHO director, uses beat production software that he then translates into sheet music for strings, horns and percussion, bridging modern sounds with traditional instruments.

The HHO will perform at Afropunk Battle of the Bands semi-finals on June 22, one of 16 up-and-coming acts that were nominated by fans from around the country to rap battle it out for a spot at the festival in August.

The HHO has already made history as the only orchestra to ever play Art Attack, UMD’s annual stadium concert, where they won the title of “most impressive performance” over headliners T-Pain and Lil’ Dicky.

We talked to the HHO’s visionary and conductor, Marcus Moody, who also works at a Washington D.C.-based  hip-hop nonprofit called Words Beats & Life, about the inspiration behind the HHO, and how they’ve made it from the University of Maryland dining hall all the way to Brooklyn.

What inspired you to start the HHO, and who were the original members?

When I started the organization, and had our first rehearsal and whatnot, it was in the basement of my dorm room, Somerset, which housed Civicus–that’s a living and learning program that’s invitational only, and based on civic engagement. The people who came to the first meeting were a guitarist, a drummer and a rapper who goes by the name of Brain Rap now, who was in a rap group called The Undergrounduates. [That group] is how I met the HHO’s first MC, David–he put some lyrics on a Chief Keef “I Don’t Like” beat that I sampled, and I pretty much just looped [it] with my viola. Then we got almost 10 people to make the beat by drumming on tables. It was on a Friday night–and we occupied an entire dining table at our campus dining hall. [Since] we were stepping on tables, we didn’t want to be stepping in somebody’s food, so we [brought] our own table.

Was the Chief Keef sample your first song?

Yes, and that was the first time we did it. So the first diner we went to, where we got on the table, the dining room manager came over to us and said “you guys need to calm down, y’all can’t do this,” and said he was going to call campus security.

The next dining hall was a bit more hostile. We were at south campus diner, and then we went to the north campus diner, because there were a lot more people…So we played that song, and the manager runs over and says, ““y’all gotta get down now, y’all know you can’t be up there,” and starts having a fit. And we’re just like “oh, shit!.” So instead of calling people to get us to come down, she flips the table on us, she starts lifting up the table from us–I’m not kidding. So we high-step to another table, and she’s chasing us around. That was the first HHO performance.

After that, we checked Twitter, Twitter was poppin, I’ve got a screenshot of what people were saying. I told people to hashtag #HHO or #HipHopOrchestra, and they were like “yo, the Hip-Hop Orchestra is lit!” And so after that, a bunch of people started wanting to recruit and wanting to join.

When was your first official performance?

Our first concert was Maryland Day. It’s an event that happens every year in the spring where [The University of Maryland] showcases students, or special things on campus. We applied, they accepted, and then we did that. Maryland Day was really special because–so my parents split when I was six, and the relationship after has always been really rocky…At our first Maryland Day performance, I’m onstage looking out in the crowd, and I see my mom, my brother, and my dad sitting next to each other. And I’m like, “oh, shit,” it was the first time in ten to thirteen years that I’d see them sitting next to each other and together. But then [our performance] was really bad…

Were you playing original compositions at that point?

We started off with an original piece after the Chief Keef thing. We had the drummer, and the guitarist, and one more violin. I was still playing the viola back then, and we had a trumpet. The Clarisse Smith Performing Arts Center emailed me, and told us that CBS would cover us if we performed at the center (also known as CSPAC).We ended up performing outside instead, but the news reporter still came through and did the interview, and we were on a segment of coverage for Maryland Day. And I see the report, and it looks like we were bred out of the Clarisse being so innovative–when we couldn’t even afford to have rehearsals there because none of us were music majors. That culture of exclusivity made it very difficult. We’ve rehearsed in basements, we’ve rehearsed in people’s houses, dorm rooms, apartments, we’ve been all over the place.

Do your beats come from what you’ve heard, or do you just get them in your head and write them down?

It’s a little bit of both. It kind of comes from everywhere. I remember one time I was on a bus and I was making a beat, and I couldn’t find out what was missing. And I was listening to the engine of the bus, which happened to create the perfect harmony. The cadences in people’s speech is also important. Everyone has their own cadence and flow, especially between different cultures and languages, and that’s something you can really take advantage of in terms of trying to find a new beat or a new rhythm…It’s about paying attention versus looking for inspiration.

Do you write parts for all of the different instruments in the orchestra? Which are the hardest to write?

Violin, and viola, cello, those are fine, because that’s my home base. But it’s the horns and the drum set–those are harder for me. But honestly, technology has made composition possible, because you can transpose, you can write a part in the language of violin and copy and paste it in the language of trumpet. It also helps me learn. It’s a lot easier than having to go on a full musical education, but that’s also a double-edged sword when you try to communicate. If somebody plays a note wrong, and you can’t tell them what note that is, you have to finesse it, and do trial and error. It also affects your ability to lead, just like with anything. Starting on production software is also a disadvantage to your ear, since all of the notes are already perfect. When you have to tune up, you have to depend on the people with the instruments to know that they are or are not in tune.

What’s your favorite thing about the HHO?

After performances, people’s parents come up to me and say “I’m so happy you did this for my child.” They’re proud that their child is part of something that I created. I think my favorite part of the HHO is it’s impact. Some people have admitted to getting a job because HHO is on their resume. We’ve given photographers and videographers a chance to document something really, really dope, and we’ve been a part of at least a dozen journalism students’ midterm or final projects. I never thought I would even still be doing this, because when we started, I thought it would just be me and my friends, playing some tunes, and doing something different. It’s become its own thing, and it’s the dopest thing I’ve ever done.