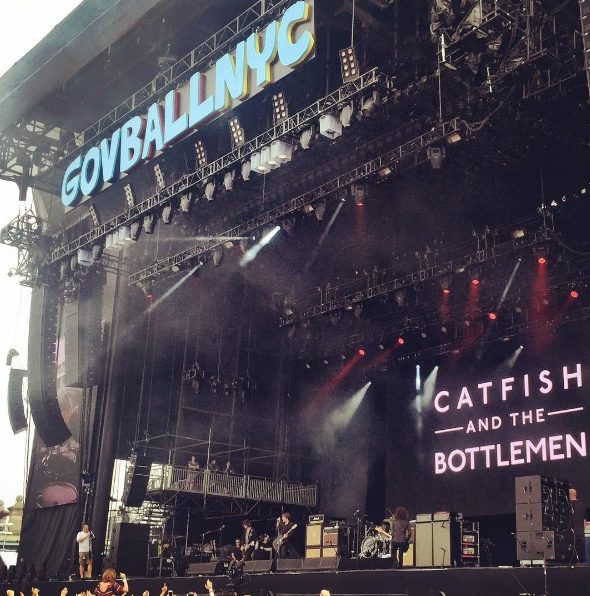 Ben Lovett likes to sign acts by instinct. “We based our decisions around songs…genre doesn’t play into it,” he says. “We don’t care how old, fat or thin… it’s about whether or not they can sing a song that moves you.” He immediately scooped up singer Matt Hegarty after he opened for Mumford and Sons, the band in which Lovett sings and plays piano (as well as a whole host of other instruments from accordion to drums). It’s an ethos that he’s held on to from his days as a producer before Mumford got big and that he has taken to heart as one of the founders of Communion Music, the London- and Brooklyn-based record label responsible for acts ranging from Gotye to Father John Misty.

Communion started out as a monthly music night at the Notting Hill Arts center in London, a forum by artists for artists, that blossomed into a record label with offices in Brooklyn (Fort Greene to be exact), London, and most recently, Nashville, with additional nights for Communion’s artists coming up in Boston, Philadelphia, Washington, D.C., and Atlanta. Communion nights are a chance for both new and established musicians on the label to try new things and expand their audiences in an intimate, relaxed setting. The artists play short sets, and the audience gets a chance to sample acts that they can dig further into later. The first location in London was a basement room of the Notting Hill Arts Club, and Lovett and the Communion staff try to keep that spirit in the venues they choose in the States.

It’s extremely important to Lovett that the label is artist-led. As he explained in a phone interview, “Too often these things are being run by finance people. People who don’t understand what it’s like to be an artist.” The company is not only a record label, but a publisher, concert series, and source of studio space.

What does that translate to in an era when even the biggest acts have to fight for the rights to their masters and tour constantly just to make ends meet? Lovett is not naive enough to believe Communion will singlehandedly solve this problem. He admits that while “we can’t change the culture, or the economy,” they can offer better terms, more rights to work, a better payment structure, and stand up alongside advocacy groups like the Grammy Foundation for artists’ rights. They can also teach artists to become better business people, so that they don’t assume that label heads are automatically smarter they are.

He’s sharp enough to know that. “at the end of the day, how people get their music is decided by the consumer,” but that doesn’t stop him, or the label from each trying to at least try to level the financial playing field. To wit, they started the Communion Singles Club, where for $31.50 per year, members get an exclusive new 7-inch record and a digital download, featuring Communion artists, every three months.

Having Communion offices in the UK and the US gives Lovett and the Communion team insight into international tastes, how what is massively popular in one country won’t fly in another. Lovett notes that, “Some of my favorite artists from the UK don’t resonate with people in America. It’s a cultural thing, but just because we speak the same language doesn’t mean we like the same music.” Still, there are some unexpected breakthroughs, like “Michael Quenita, an artist influenced by various R&B and soul traditions. He’s done pretty well, been on American TV, and sold out shows across the country.” In the other direction, Twin Peaks (the Communion-signed band, not the television show) has gained a large following in the UK because it reminds listeners of American, “high school, teen films…think of people in bandanas and convertible cars,” says Lovett. “People in the UK have massively connected. They find it somewhat exotic.” Who knew the entire world was so eager for music that reminds them of high school in the 1950s?

Communion is also fiercely dedicated to the cities they’re based in. Lovett fell in love with New York, and particularly Brooklyn through touring and now lives here (he won’t say which neighborhood, only “South Brooklyn”). He calls it a “really great place for shows to happen because of the diversity. Richest community I’ve experienced–lots of people mixed together discovering music together.” The monthly series has moved around to various venues around the city, mostly in Brooklyn, but currently lives at the Rockwood Music Hall on the Lower East Side.

Going forward, he “[hopes] to see more people in [Brooklyn] coming down toward Gowanus and Fort Greene and Industry City. To that end, he’s become one of the owners of Gowanus bar Givers and Takers. Lovett and few other music industry friends, including Jesse Mann, who has worked for Bowery Presents wanted an “open, friendly, and straightforward bar” Lovett is probably the only person to call being involved in a bar “not as complicated as some of the other things in my life,” but when he talks about how much he loves the beer selection and the patio, you believe you might actually run into him there.

Specific plans for the Communion’s future are under wraps at the moment, but Lovett “[hopes] one day, if the community would support it, we’d love to bring a weekend day time festival to Fort Greene Park. We would like to bring people together. It’s why we call ourselves communion. if we can do that through music we are succeeding in our minds.”

Visit the Communion website for dates and tickets to the next Communion night in New York City, or check the Rockwood Music Hall site.