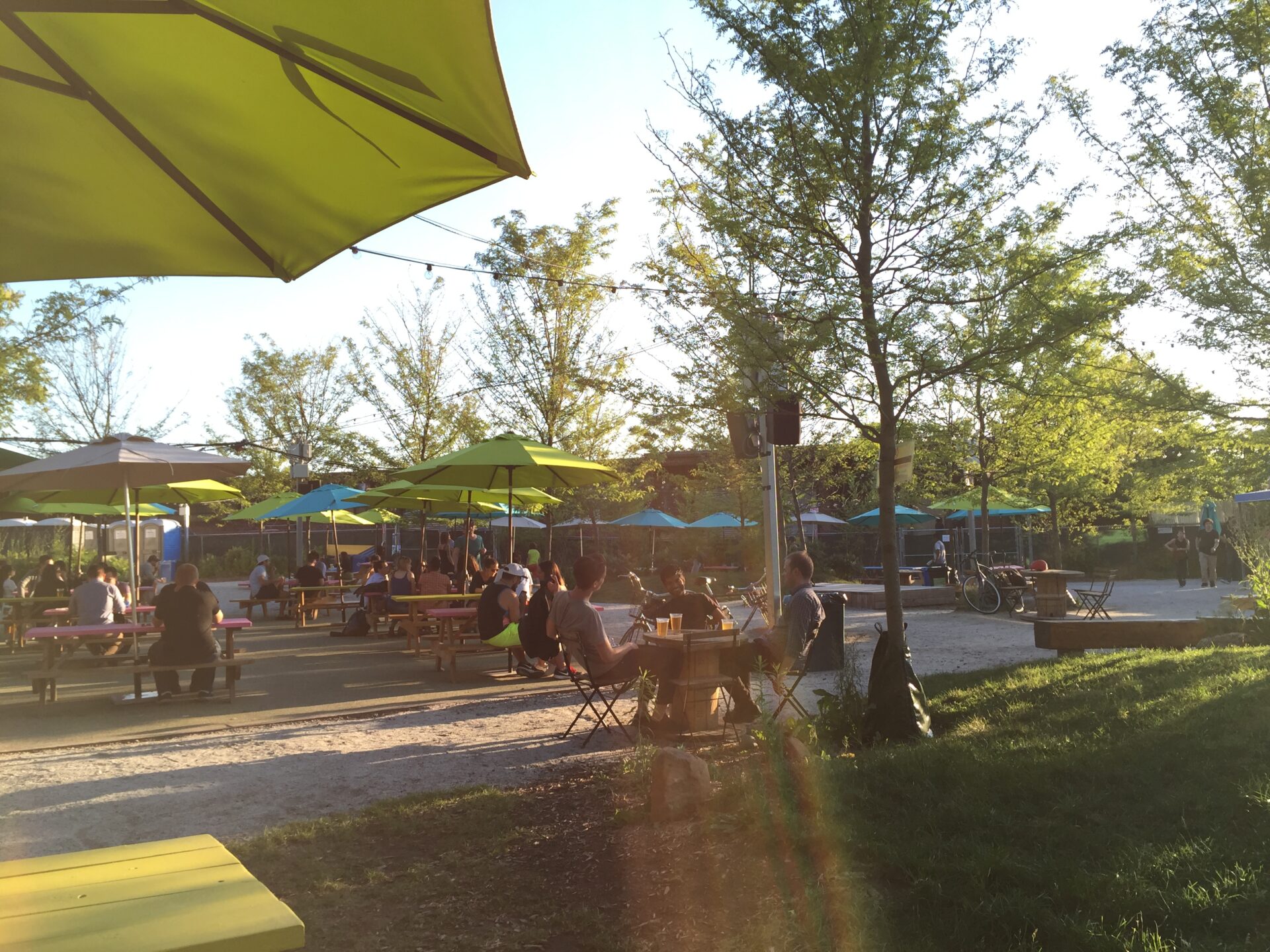 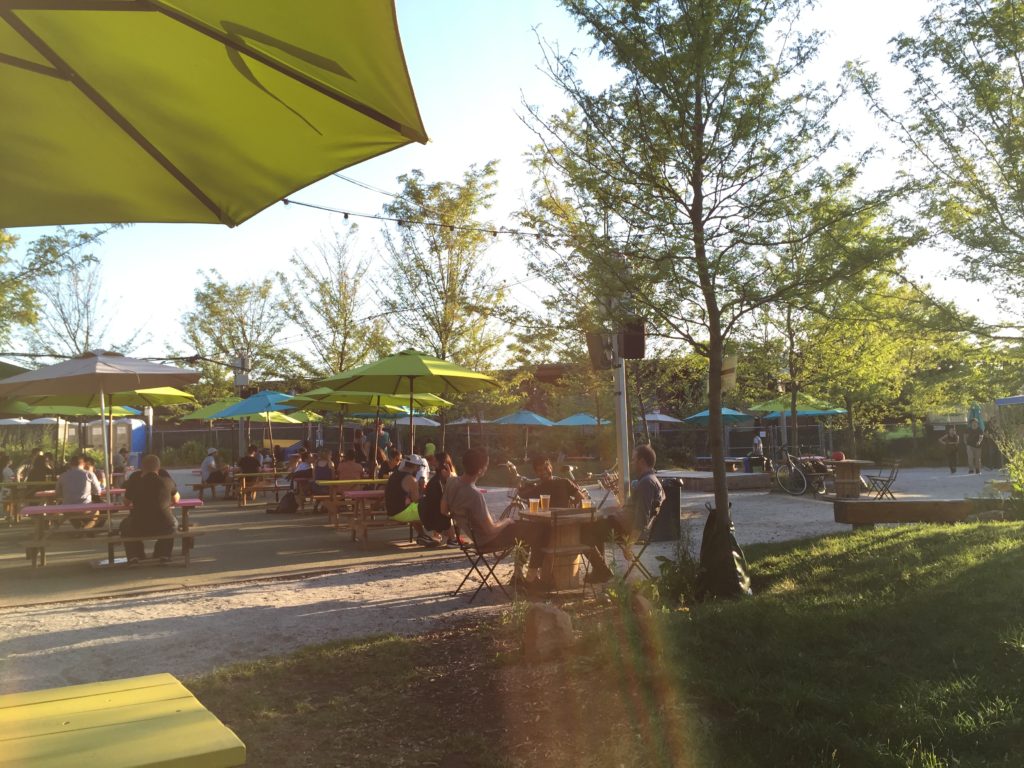 Nowadays is more like a park where booze is allowed than your typical bar. Photo: Nicholas Rinaldi

Not quite a beer garden, Nowadays is probably best described as a park where drinking is encouraged. Any discussion of Nowadays should also mention upfront that this place is pretty out of the way, but it’s more than manageable from the L train–the hard-to-spot entrance is about a five minute walk from the Halsey stop, in a neighborhood you probably wouldn’t have visited five years ago. (And for anyone wondering, the area feels as safe as Morgantown.)

On an average evening at Nowadays groups of friends cluster at picnic or cafe tables, beers and hot dogs in hand. On busier nights, you may have to wait in line for a bit at the bar, which is separate from the food truck selling a surprisingly sophisticated menu of upscale street food. The beer menu is a rotating offering of regional brews, like Narraganset and Lagunitas, that run $6 or $7 a pop. Wine, red and (sometimes) white sangria, and prosecco on tap are available for $8, with bottles also available (but strangely, pitchers of beer are not). This is the kind of place you might worry would be cash only, but cards are accepted–which is a good idea, as the nearest ATM machine is blocks away. It’s a solid, reasonably priced selection, but we wish they had a full liquor license for cocktails. 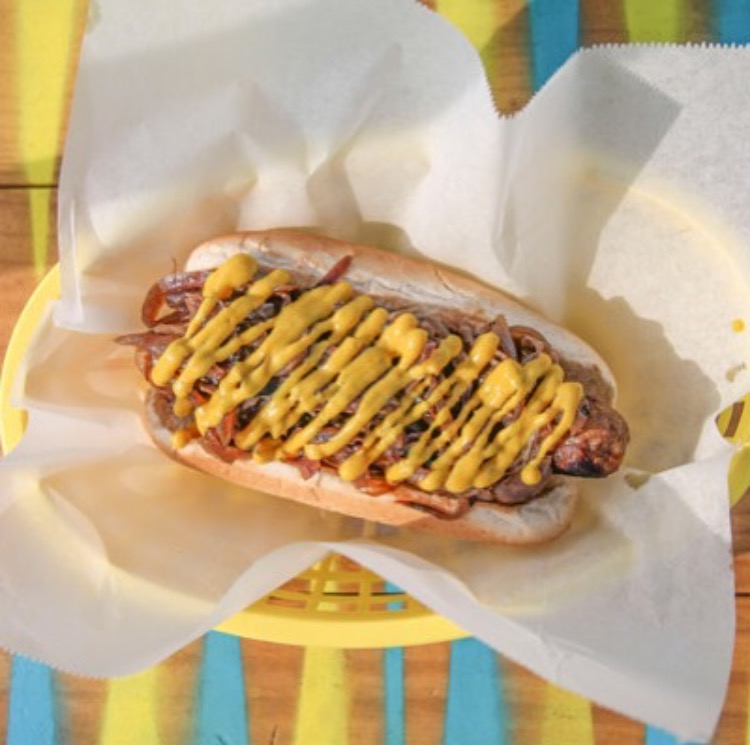 The food is not to be missed, and worth the sometimes long wait (in keeping with the generally leisurely atmosphere at Nowadays). Hot dogs ($5)–beef or veggie–come topped with crushed potato chips, ketchup and jalapeño mustard, which will set your mouth on fire. For $8 you can get a beer-braised bratwurst with mustard and caramelized onions, and a grass-fed Nowaburger is $12. The sandwiches (excluding hot dogs and sausages) used to come with a side of fries, but co-owner Justin Carter told us that they were replacing fries with side salads or fancy potato chips because the fryer was proving problematic in terms of the amount of power it took to run. 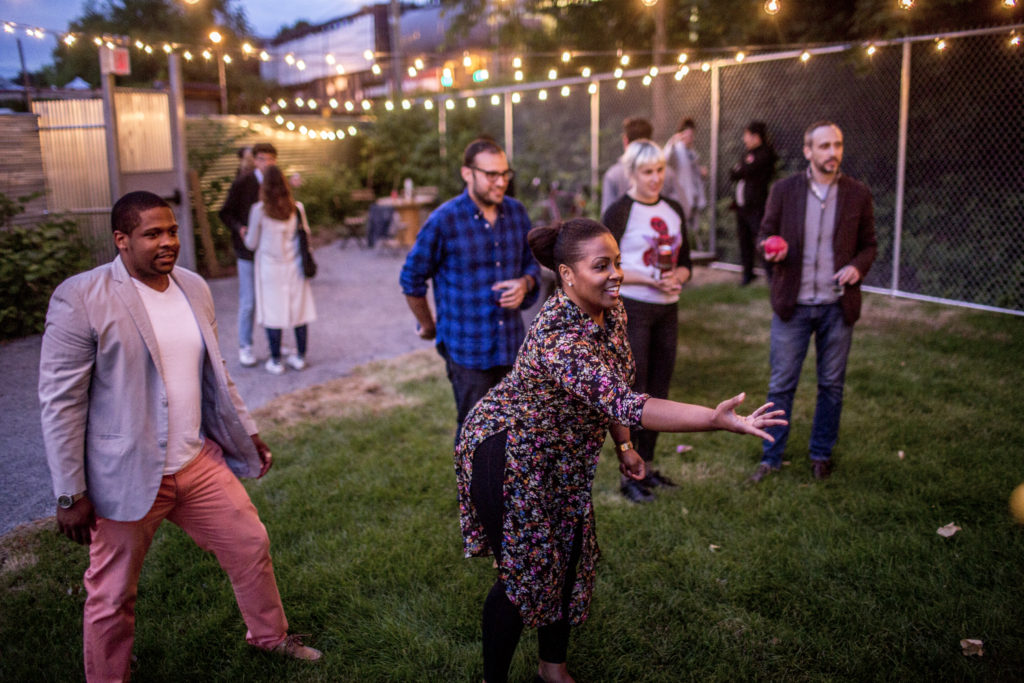 It’s clear that the folks running Nowadays realize that it’s a bit of a trek, and so they’ve set up quite a lot of programming to make it worth the trip. On a typical evening, Nowadays is as chill as can be and free to get in, but on Sundays it is host to the Mister Sunday outdoor dance party, which can get a little intense. Admission is $10 in advance and $20 at the door. There’s an impressive film series curated by Mayles Cinema free on Monday nights. Tuesday nights Think Olio presents a 90-minute class on some intriguing topic (tomorrow night it’s on Foucault, sexuality and identity, and the $10 ticket price will be donated to victims of the Pulse shooting in Orlando). There’s a weekly Ping Pong tournament on Wednesdays and on Thursdays and Saturdays, guest “DJs” share curated playlists for free.

An unintentional amusement at Nowadays is a competing outdoor party right across the street, where locals have created an unofficial parking lot bar of their own (perhaps long before Nowadays existed), and have a habit of playing their Spanish music loud enough to drown out the Nowadays speakers.

You may be wondering about the bathroom situation. There are regular portapotties and also those upscale trailer bathrooms that make you feel like you’re in backstage VIP area at an outdoor concert or an extra on a film set. They’re an excellent solution for the space and it should be noted that the bathrooms at Nowadays were always super clean when I visited.

You can reserve up to seven picnic tables if you’re throwing some kind of party, you just have to put down a $75 deposit on a $150 minimum bar tab. Though you definitely should not bring either to Mister Sunday, the park-with-booze vibe makes Nowadays a good place to hang with kids and dogs. Basically, this is the backyard you don’t have–and don’t have to clean up when your friends leave.