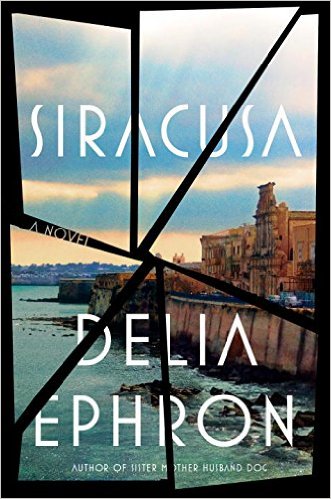 It’s hard to imagine a better beach read than Siracusa, the new novel from Delia Ephron. If this was a movie, which it surely will become, the pitch meeting would go, it’s The Vacationers, meets The Talented Mr. Ripley, meets Gone Girl.

Two couples, Lizzie and Michael; and Taylor and Finn, plus their 10-year-old, Snow, go on vacation together in Italy. Lizzie, a journalist who is struggling to find work and relevance, and Michael, a famous playwright who made a name for himself at a very young age, live in New York. Finn, a chef with whom Lizzie had a brief fling years before, and Taylor, live in Portland, Maine, where she runs the local tourism board and parents Snow so intensely that the child barely speaks to other people.

Each chapter of the novel is told from a different character’s perspective, a narrative trick that would feel cheap in the hands of a less capable writer and pointless in the service of a less psychologically driven plot. It begins with Lizzie looking back on the trip to Rome and then Siracusa, in Sicily, which, though she provides us with no specifics, clearly ended in tragedy. The Rashomon structure is like reading the internal monologues behind the small talk at dinner party thrown by your boyfriend’s ex who invited you both over because they still have chemistry and she wants to show that off in front her new boyfriend, whom you strongly suspect is a real douchebag.

Except it’s all so much darker than that.

Siracusa tells a story of people transitioning from early middle age into middle middle age. They’re on vacation to escape lives that are filled with regret about opportunities lost and apprehension about the future. Taylor, a patrician blonde who grew up in New York society circles, and Finn resent Lizzie and Michael’s New York-as-the-center-of-the-world attitude. Snow reminds Lizzie and Michael that children are all but entirely off the table for them. Lizzie and Finn flaunt the thread of attraction that still connects them. Taylor basks in Michael’s semi-famous glow.

Most of all, though, Siracusa is a book about secrets. The characters lie to their spouses about things big (an ongoing affair) and small (a persistent tobacco habit), to themselves and to each other, knowingly and unconsciously. The entire vacation is based on the lie that these two couples who are as different as can be, tethered only by a brief romantic relationship that ended nearly two decades before, with no old history to fall back on, no shared experiences or mutual affection, are people who should travel together.

Despite the split narration, Lizzie emerges as the most central character, and although she’s not entirely likable, she is the most comprehensible, the one we’re meant to identify most closely with. It’s a rare beach read that employs a cast of unlikable characters, but in Siracusa their preening and deceit doesn’t grate, it just builds the tension and drives the plot forward. There’s definitely a bit of schadenfreude here–these people are irksome in all-too familiar ways, we’ve all met versions of them in the real world, though likely not all at once. Their own words reveal what you always suspected–it’s not that much fun to be Lizzie or Michael or Taylor or Finn.

In the end you’ll agree: Hell is other people’s relationships, but it’s pure reading heaven to explore the intricate web of secrets that keep these couples together.