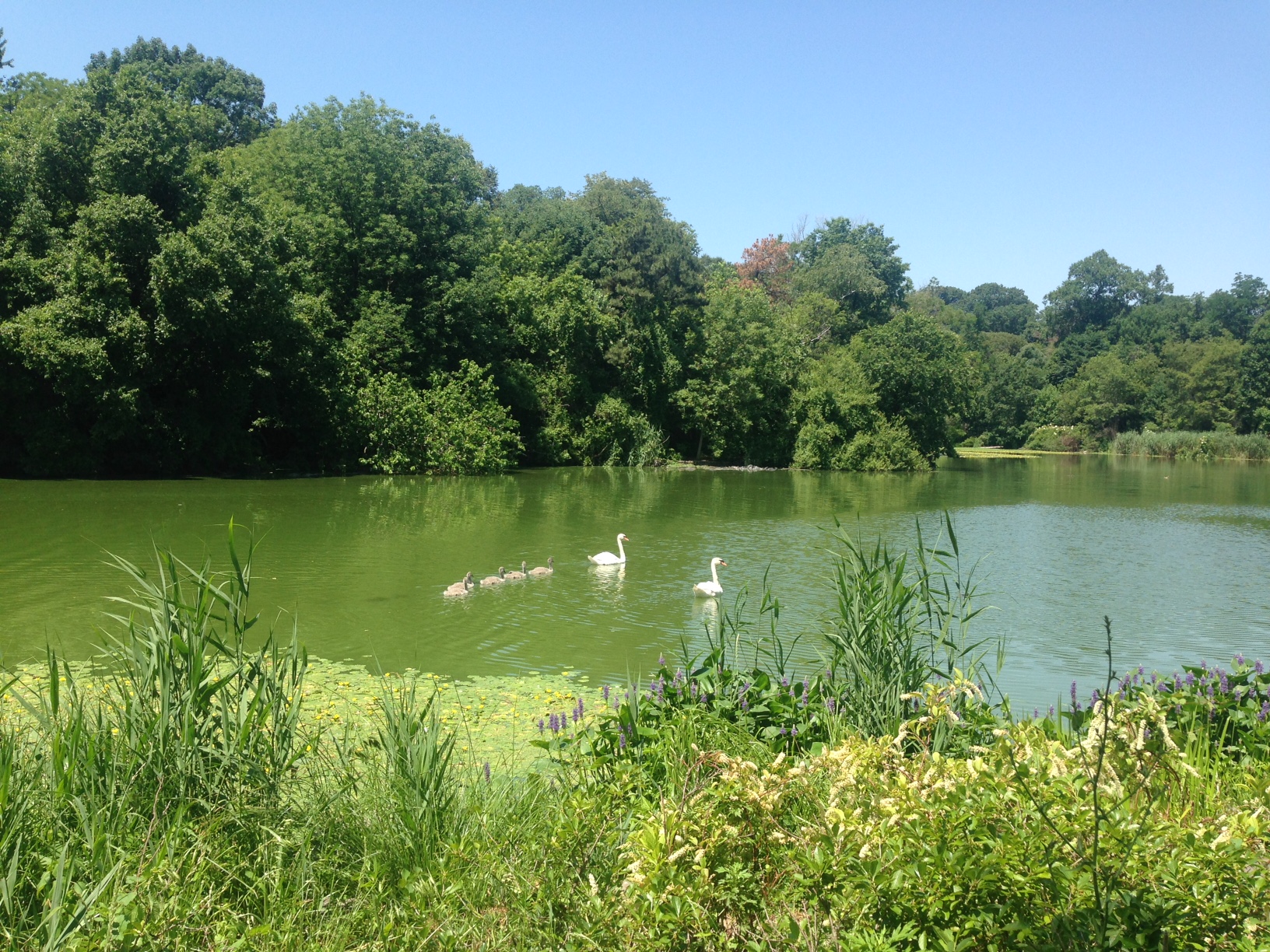 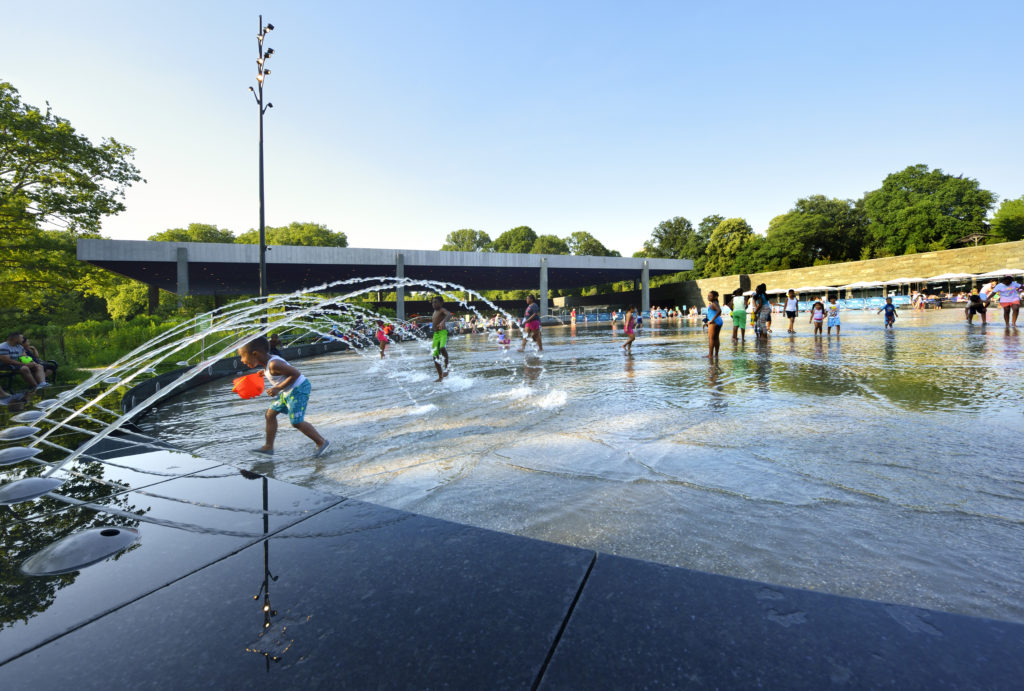 The splash pad at LeFrak Center at Lakeside is a pretty sweet spot in the summer. Photo: Prospect Park Alliance

My son is just 16 month old; his attention span for everything save climbing on top of our coffee table and standing on the toilet, turning the faucets on the bathroom sink on and off is fairly limited. When he was a baby he napped in the stroller through the cherry blossoms at the Brooklyn Botanic Gardens and the new Whitney (he burped so loud after a feeding session on one of their Hudson River-facing couches that other museum goers gave him a round of applause). Now though, he’s a toddler with very strong opinions who attempts to launch himself out of that same stroller when he grows weary of my overly-grown-up pursuits, so after a few failed excursions that were not age-appropriate I learned my lesson–it’s just not worth it to drag a little kid an hour each way on the subway to something he’s not ready to dig. Especially when we can just walk 15 minutes to visit Franklin, the pig who lives at Crest Hardware in Williamsburg and I’m like, mom of the year.

New York is so full of cool stuff to do with kids though, that I’m always eager to join groups of mixed ages for excursions, so when my sister visited a few weekends ago with my two-year-old nephew I was excited to venture to Prospect Park to visit the splash pad at LeFrak Center. The trip from North Brooklyn wouldn’t have been worth it just for my son to splash around for 20 minutes, but with my nephew and a friend’s almost four-year-old and a picnic in the mix, it was a totally successful day trip. 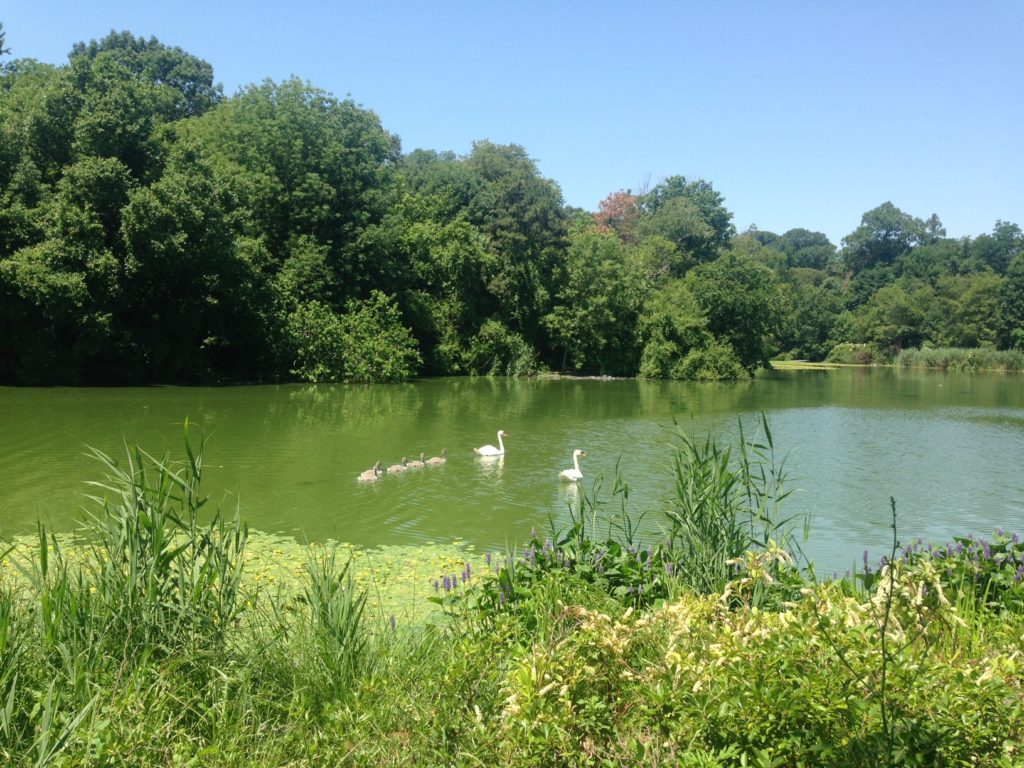 This is in the middle of Brooklyn,. Photo: Annaliese Griffin

The LeFrak center is part of a huge revitalization project along the south eastern lakefront in Prospect Park (the biggest project in the park since it opened in the 1860s) and it includes a roller skating and ice skating rink, a sweet water feature for kids, and a café. You can also rent bikes  (they have tandems and surreys in addition to regular bikes, all starting at around $12/hour), kayaks ($15/hour, $40/day single; $25/hour, $45/day double), and paddleboats ($25/hour for a two-person, $35/hour for four).

The best way to get there is to take the Q train to Parkside Avenue, from there it’s a short walk. Simply put, the Splash Pad is pretty awesome. It’s a big, shallow basin (the water is only a couple inches deep) surrounded by a low wall with jets of water spraying toward the center. It’s huge and the spray is continually changed in height and force, so there’s a lot of shrieks of delight when accidental parent-soaking occurs.

My little dude is still somewhat wary of water (though he loves pools–it’s more moving water that gives him pause), so after padding around a bit, he shared some watering cans and buckets with another visitor. My two-year-old nephew was captivated for much, much longer, and our friend with an almost-four-year-old had to drag his son away. It’s huge, so while there were tons of children and their parents there, it didn’t feel crowded, though it’s definitely the kind of quickly moving crowd where if you lose sight of your child for a second you might experience a few moments of panic before you remember which color swim tee he was wearing and spotting him two feet away, happily splashing around.

While the splash pad itself feels spacious it lacks seating around the edge for non-splashers, and more importantly, shade. If you head there in a group, one person will inevitably end up standing with the strollers and towels and junk. There are some cafe tables and chairs with umbrellas, but one annoying feature is that the more expansive picnic tables are reserved for customers at the Bluestone Café, which backs onto the area. The food isn’t super exciting–burgers and salads, fries, grilled cheese, lots of kid-friendly stuff, not super expensive, but pricy enough to remind you that some families can afford to drop $60 at the park because they feel like sitting at a table in the shade, and some cannot.

Reasonable people can disagree about the private-public partnership of a for-profit café in a public park, but there are two solid takeaways here. It’s a real public relations disaster on their part that the café doesn’t open until noon, but a security guard stands there telling people they can’t sit at what are the comfiest, best shaded seats in the area, even though the restaurant is closed. When we were there a man grew increasingly irate over this situation, promising to buy lunch when Bluestone opened if he and his brood could just take a load off right then. He was denied. At the same time, there are very nice bathrooms which serve the café and the whole LeFrak Center. Those were open and a welcome relief to the dank caverns you find in most parks, and obviously made possible by the whole café situation. It just seems like the seating situation could be improved in some way.

Brining a picnic is much more fun than feeling like a park overlord at the café, anyway. You can set up a blanket close to the lake–there are some shady spots to be found, particularly as you walk north from LeFrak Center.  We got to watch turtles sunning themselves on rocks, and a whole brood of swans gliding by followed their fuzzy gray cygnets. To be honest, the swans made me a little nervous, since they’re infamously aggressive (or are they?), but they were infinitely fascinating to the toddler brigade.

On Sundays you could skip the picnic and stroll up to Smorgasburg for snacks. Or, head there after your picnic for dessert. Depending on how many sticks you’ll need to stop to collect on the way (in our case all of them), it will take something like 15 minutes to get there. You can exit close to the Prospect Park stop on the Q and head home, or extend your walk and explore more of the park after you get your fill. We were there on a Saturday and instead decided to walk around the lake while the boys napped in their strollers, which was totally beautiful and took us through some parts of the park I had never been to before. I wouldn’t necessarily recommend this route for walkers without a fair amount of stamina, because you can to a place where it’s a good 20 minute walk to get out of Prospect Park, which will feel more like 20 hours if there’s whining involved, whether from toddlers or grumpy adults.

We stopped and parked the strollers and hung out on our picnic blankets on the southwest side of the park, near the tennis courts, and I popped over to Elk Café to get iced coffees before we headed home. (They also have good snacks.) All in all, we kept three kids of different ages well entertained, well fed and even reasonably well napped and explored part of the city I had never had a chance to visit before. We also successfully avoided swan attack and no one fell in the lake. Pretty sweet playdate.