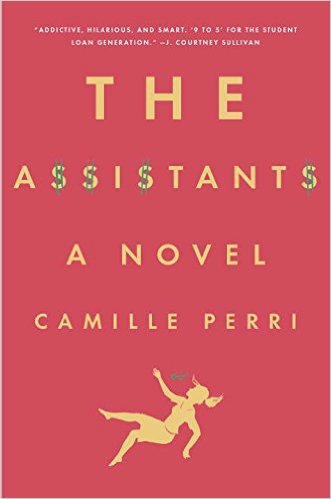 The Assistants by Camille Perri could not feel more of-the-moment if it tried. Narrator Tina Fontana lives in a crappy apartment in Williamsburg and works as an underpaid, harried executive assistant to a media mogul with more money than god. Through an accounting quirk she receives a reimbursement check for a work expense that had already been refunded to her credit card, in nearly the exact amount of her outstanding student loans.

Actually, let’s back up a bit, because it is important to define the “accounting quirk.”

Her boss, Robert Barlow, needs to fly to fly to L.A. from New York, but his private jet is being repaired. He instructs her to book a last minute, first-class flight, have the seats around his empty and to make sure that he gets it for free, because well, he is who he is. “What amounted to buying out half of first class on a flight that would be leaving almost immediately, Robert wanted for free. And he expected it to be done as simply as saying, ‘Hold the mustard,'” Perri writes. Tina ends up putting the nearly $20,000 ticket on her credit card to make the whole thing happen, but in the course of her request for the comped tickets, the airline refunds her, but after she has filed the for the expense. Voila. She intends to rip it up, but after a miserable day at the office she impulsively uses the check to pay off her student loan.

All of this is important to note because of what comes next. Emily Johnson, another assistant from the accounting department, figures out what has happened and tells Tina that her secret is safe, so long as Emily’s loans get paid off too. Pretty soon they’re running a student loan relief program based on ginned up expense accounts that raise nary an eyebrow. As Tina says, “There is so much money.”

This scheme doesn’t stay simple for long, and there’s a romance, of course, but the primary action of The Assistants takes place in the vast divide separating the rich and the powerful and the underpaid, underinsured people who make their lives happen. It’s a perfect novel for a generation of perpetual interns struggling to enter adulthood on salaries that barely cover a tiny bedroom in a shared apartment. It also comes complete with fictional Upworthy (How Did Two Little Girls Outsmart the Most Powerful Man in New York?)  and BuzzFeed (Modern-Day Robin Hoods Look More Like Charlie’s Angels) headlines.

The really interesting thing about The Assistants, which you’ll race through because it’s so much gratuitous fun, is that the stealing is never cast as morally wrong. Without spoiling anything, there’s one disapproving character, but it’s more about lying to cover up to scheme than the actual act that is a problem. It all reflects a new sense of morality that argues that the class structure of America so weighted in favor of the rich that anything an individual can do to take back power a dime, or a $20,000 reimbursement check, at a time, is morally justified. It matter to Tina and Emily that they barely make enough money to stay afloat, and yet tens of thousands of dollars can be billed to fictional extravagances and no one notices or cares. The Assistants is a fun little summer read, but it’s also a revolution in office casual.