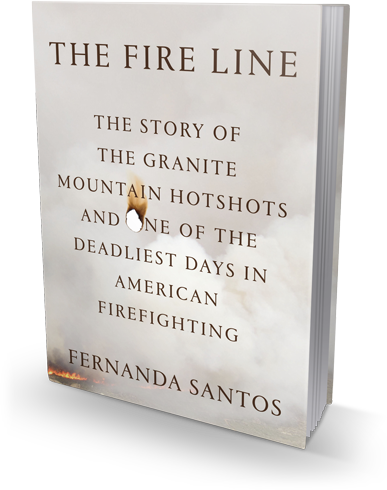 The Fire Line begins at the end, with the death of 19 firefighters who were killed in the Yarnell Hill Fire in Arizona on June 30, 2013. It’s a difficult way to start, to commit to spending 200 pages with 19 men who you know will be dead by the time you’re done reading. Fernanda Santos, Phoenix bureau chief for The New York Times, makes it worth the heartbreak with a heartfelt and fascinating look into the world of wildland firefighting.

At the time of their deaths, the Granite Mountain Hotshots, who were based in Prescott, Arizona, was the only municipal crew of its kind in the country. As Santos explains, “Hotshot crews are cohesive units of twenty firefighters, extensively trained, hugely fit, and routinely courageous… They use the weapons of construction workers and landscapers: rakes, axes, shovels, pounders. They go where few other firefighters go, closer than any of them to a burning wildfire.” (Brendan McDonough, the twentieth Granite Mountain Hotshot, survived, having been assigned lookout duty far enough away from the flashing blaze that killed his compatriots.)

One of the main narrative challenges comes from the sheer number of the crew. Santos introduces us to each one of them, from seasoned team leaders with more than a decade of experience fighting wildfires to rookies slogging through their first season. It becomes clear, especially in reading the author’s note, that Santos, in her many hours spent with the Granite Mountain Hotshots’ survivors, including several children who has not yet been born when their fathers died, that she feels a responsibility to give each man his due in the narrative. We meet brave young man after brave young man, most of whom are in their twenties, many of whom have children, all of whom have friends, families, wives and girlfriends. The immense scope of the loss suffered by the people who loved these firefights pervades the book from the moment we’re introduced to our first crew member on the first day of fire season, 2013. “One of the rookies, Kevin Woyjeck, sat in the row, a studious recruit drinking it all in on the crew’s first day at work, April 9, 2013. He had a faint dimple on his chin, freckles on his nose and a trace of facial hair. He was twenty-one, a firefighter’s son.”

The Fire Line shines the brightest in Santos’ descriptions of the work of fighting wildfires, much of which is incredibly hard and monotonous–digging trenches to keep fires quarantined, hiking miles into the wilderness with heavy packs, cutting back brush to remove fuel for a fire waging near by. Rookies on the Granite Mountain crew made $12.09 an hour in 2013–no paid time off, no holidays, no vacation, no health insurance. Until you move up the ladder it’s a seasonal job, and the pay only makes sense when you factor in the hundreds of hours of overtime a crew is likely to work each season.

Santos cmpleted basic training at the Arizona Wildfire and Incident Management Academy in the course of researching  The Fire Line and she delves deep into hot weather, especially the extreme dry heat that’s so prevalent in the Southwest during the summer months, can exacerbate a blaze. Particularly complex wildfires get their own incident meteorologists (IMETs) who work on the ground with firefighters to help predict the movement of the flames.

She also details, and this could be a whole second book, some the efforts of inmate firefighting crews, common across the Western U.S., especially in California where Santos tells us that nearly 5,000 incarcerated men and women who have undergone intense training fight fires for the state.

While her commitment to presenting the individual circumstances and stories behind the tragedy lends an intense emotional weight to The Fire Line, it can make for a challenging read. Keeping track of 19 characters who are all on the same fire crew proves challenging at times.

It’s also one of the book’s strengths. As she details with incredible precision, the Yarnell Hill Fire started out as a fairly standard blaze and escalated through a series of poor decisions, missed opportunities, lack of resources and bad luck. She presents the fire, and events that led to tragedy with studied, intensely researched objectivity, rather than seeking to assign blame or draw conclusions about what could have changed the outcome of that terrible day.