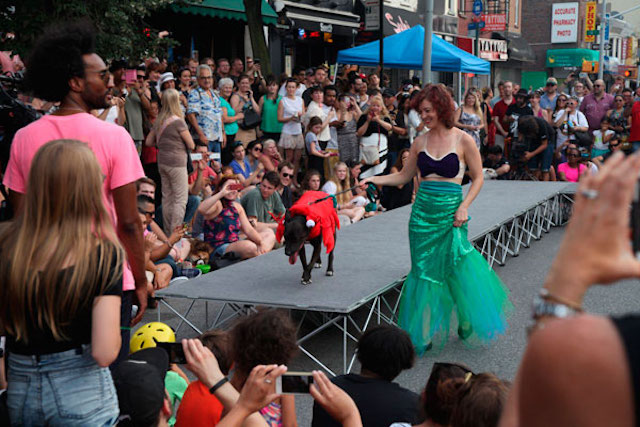 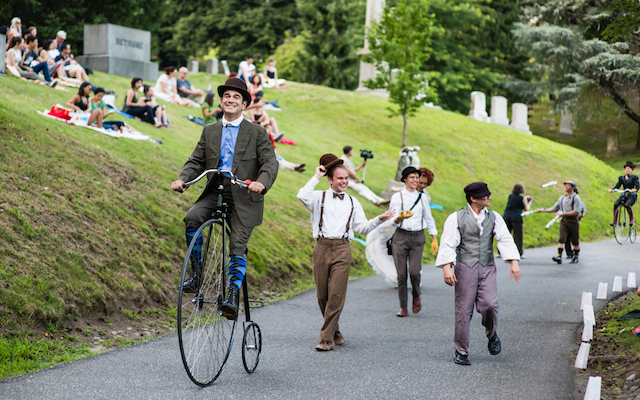 Last week was a sobering one. For those of us who weren’t directly affected by the tragic events in Louisiana, Minnesota, and Texas, it’s hard to know what to do, and often the feeling of powerlessness and the apathy it spawns seem insurmountable. But, of course, the only way that it can ever be vanquished is through the sheer force of human compassion, empathy, collaboration, and action.

If you feel like you can’t make a difference, I urge you to challenge that assumption this week. It’s repeated so often that it’s almost an empty platitude, but write a thoughtful letter to a politician and let them know what kind of action you need to see. If you don’t know where to start, this site is a great resource and might be a good place to start. Take a break from reading about the ceaseless, puerile echo chamber that is the 2016 presidential race and figure out how to get involved locally, in your own neighborhood, where your voice will actually be heard. Read an article or blog post written by someone who has a different background or perspective than you do, volunteer in your community or in another community that needs you, write a letter to the New York Times or a column for our site (drop us a line–we’re all ears), make a piece of art that packs a powerful message, talk to your friends about ways you can take action together. As Margaret Mead once famously said, “Never doubt that a small group of thoughtful, committed citizens can change the world; indeed, it’s the only thing that ever has.”

There is, however, also time to relax, recharge, meet new people, and get outside and enjoy the city around you. For starters, the Brooklyn Hip Hop Festival is back for its 12th year starting tonight, and this year’s headliner is none other than Nas (!), who will top off a lineup that involves Talib Kweli, Fabolous, Rapsody, and more. Also, if you really want to get out of dodge and get weird, the Gratitude Migration is a two-day-long music/art/dance/environmental/mindfulness retreat/workshop/art display/camping trip going on at a beach in New Jersey. It sounds like a combo between Woodstock, Burning Man, TED Talks, SXSW, and Kripalu all rolled up into one wild weekend, and it might be just what you need to shake things up mid-summer. If you’re sticking around town, though, we’ve got loads of events happening right here 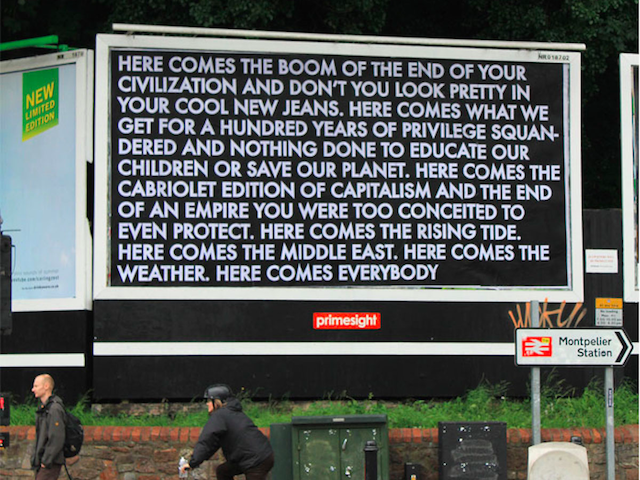 There are so many ways to make a difference, including taking a more, ahem, active role in interacting with advertising. Photo: Public Ad Campaign

Thursday, July 14 Women of Letters, the much-acclaimed series at Joe’s Pub that regularly features female literary and cultural icons reading letters they have composed, changes things up once a year and holds a Men of Letters event. That’s happening this Thursday, and it especially caught my interest because one of the guests scheduled to appear is Damian Echols, who was one of the wrongly-accused “West Memphis Three” who were the subject of the Paradise Lost documentary series on HBO. I’m pretty sure that I have read or watched everything by or about Echols that is available for public consumption– his story is fascinating and he also happens to be a gifted writer– so I don’t want to miss his “letter to the woman who changed my life” (presumably Lorri Davis, the then-Brooklynite who started writing to Echols when he was on death row and eventually became his wife). Other guests include How I Met Your Mother’s Josh Radnor and Slate columnist Stephen Metcalf. Tickets are $20 and the show starts at 9:30pm

Friday, July 15 Anyone who follows me on Instagram knows that I have more than a passing interest in street art, so I was intrigued to read about Friday’s Practical Introduction to Advertising Takeovers workshop, which covers both the history of and theory behind “subvertising” (which encompasses the altering, removing, or reversing of commercial outdoor media spaces) as well as tips on how to pull off your own projects right here in New York City. It’s a more rapidly growing phenomenon than you might realize, and if you’re interested in learning more you should register to attend this free event or check out the website of its sponsor, Public Ad Campaign. Another option for Friday night is the first anniversary of Art School Acid Dropout, the interactive visual art and comedy show hosted by artist Grant Lindahl at Creek & Cave in LIC. To celebrate a full year of wild performance pieces (Grant has been tattooed live and set on fire on stage), the show welcomes an extra special lineup this month that includes Dave Hill, Josh Gondelman, Joe Pera, and guest artist Mindy Tucker. Tickets are $5 and the show starts at 10pm.

Saturday, July 16 South Slope is the place to be on Saturday, when the neighborhood’s Summer Stroll happens to coincide with the third annual Doggy Fashion Show at Freddy’s Bar and the return of A Night at Niblo’s Garden to Green-Wood Cemetery. Starting at 5pm, Fifth Avenue will be closed to traffic between 12th and 18th Streets for the stroll, which will feature live music, food and drink from area restaurants, an empanada eating contest, face painting, and lots more ways to keep yourself entertained. The event will culminate with Freddy’s popular canine runway show on a red carpet and “catwalk” built outside the bar at 6pm. As in years past, the show is free and open to all contestants, will include live music and celebrity hosts (this year, Mike Drucker and Jess Dweck, both writers for The Tonight Show with Jimmy Fallon, are on the slate), and is expected to draw quite a crowd of fans and onlookers. Proceeds from beer sales will benefit Sean Casey Animal Rescue, ensuring that other doggies out there get a chance at a life full of happy things like doggy fashion shows. Meanwhile, Green-Wood Cemetery honors one of its more colorful permanent residents, 19th century entertainment icon William Niblo, by transforming the area surrounding his mausoleum into a pleasure garden featuring circus performers, Vaudeville acts, dancers, and musicians. Bring your own picnic and settle in for a night of old-timey entertainment under the stars: Tickets are $37. And, finally, if that wasn’t enough to be packed into a 10-block span for one day, the Brooklyn Bavarian Biergarten (you know, the one connected to the storied institution behind this masterpiece) is celebrating its first anniversary with a night of food, fun, and festivities starting at 8pm.

Sunday, July 17 Sunday is the second day of the weekend-long Out in the Streets Fest set on the grounds of the historic Onderdonk House in Ridgewood, Queens, which features live performances from an awesome lineup of 20+ bands, as well as food, crafts, and art vendors at a special pop-up edition of The Ridgewood Market. Sunday’s set brings headliner Frankie Rose, as well as TEEN, Honduras, and a bunch of other acts you won’t want to miss. A day pass will run you $25.  If you’re digging the outdoor market vibe, you can also swing by Williamsburg’s newly opened Bulletin Market, which is running 11-7 on weekend days this summer out of the giant empty lot on Driggs between North 8th and North 9th. Food trucks like Taim, Luke’s Lobster, Kimchi Tacos and more will keep your hunger at bay while you peruse goods made by local designers and listen to DJ sets from Supply New York.

Monday, July 18 Have your recent grilling endeavors resulted in dry, flavorless meat? Here’s the deal: Summer’s less than halfway over, so you still have plenty of time to brush up on your BBQ game, and you can get a great push in the right direction on Monday night at the Masters of Social Gastronomy’s Get Barbequed event at the Old Stone Barn. From 8-9:30pm, learn everything you’d ever want to know about the history of roasting meat low and slow over a grill, plus pick up a lot of helpful techniques and tips for your own grilling adventures from the experts. There is a suggested $5 donation to attend, beer and food will be available for sale, and you should RSVP here. On the other hand, if you’re a weirdo who doesn’t share the general public’s visceral loathing when it comes to creepy crawlies like snakes, spiders, and the like, Morbid Anatomy Museum is hosting an Insect, Arachnid & Reptile Petting Zoo from 7-9pm.

Tuesday, July 19 If you loved Norwegian Wood, 1Q84, and The Wind-Up Bird Chronicle, or if you just love delicious Japanese food, Court Tree Collective’s Murakami Dinner this Tuesday night might just be right up your alley. Chef Ben Tong is serving up a four-course, Kaiseki-style meal inspired by the writings of the bestselling novelist, and the menu is looking mighty tasty. Tickets are $65 and dinner is served at 7pm. Another literary option for Tuesday evening is The Prose Bowl at Pete’s Candy Store, a semi-competitive, open mic, flash fiction reading series. Anyone who has written a short story that reads in less than five minutes can enter the fray and members of the audience (who all get to take advantage of happy hour drink prices, FYI) ultimately vote and choose the winner. 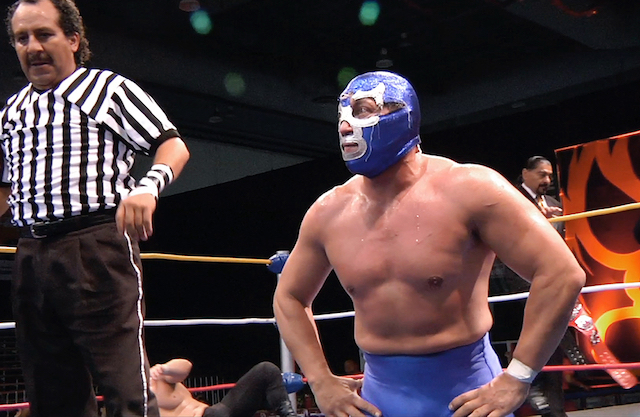 “Lucha Mexico” is playing at The NItehawk all week. Photo: Lucha Mexico

Wednesday, July 20  Anyone who’s ever wanted to go behind the mask and take a closer look at the Lucha Libre wrestling scene should check out Lucha Mexico, a new documentary following some of the sport’s biggest names, like the “1000% Guapo” Shocker, Blue Demon Jr, the tragic hardcore wrestler El Hijo Del Perro Aguayo, and extreme American bodybuilder Jon “Strongman” Andersen. Nitehawk is screening the film, which was directed by Alex Hammond and Ian Markiewicz, all week at 4:35 and 7:15pm, and tickets are $12 each.