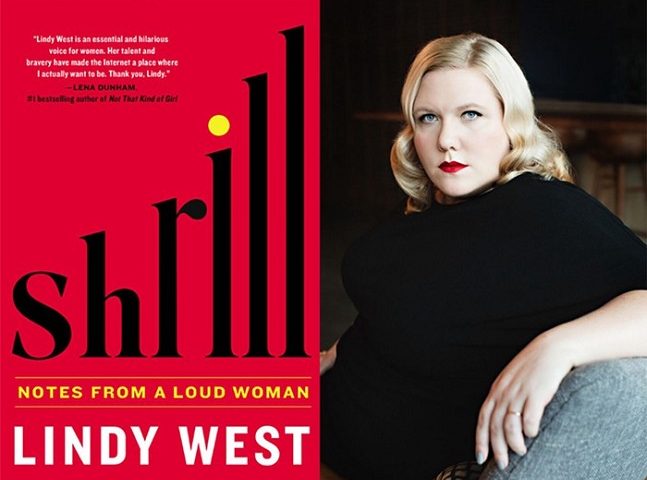 Upon reading anything West writes, however, it is immediately obvious that she is not only not humorless but affirmatively funny as hell, that she has a smart, confident, original voice that rises above the garbage pile of what passes for discourse about feminism on the internet, and that she is refreshingly unafraid and unapologetic.

The first time I ever heard of Lindy West was when she caused an Internet firestorm in 2012 by writing a post for Jezebel entitled “How to Make a Rape Joke.” The essay was both a response to an unsettling confrontation that had recently occurred between comedian Daniel Tosh and a female audience member who objected to a rape joke in his standup set and also a venting of West’s growing frustration with some irritatingly persistent assumptions in the comedy world: that rape jokes are inevitably funny, and that women who object to them only do so because “we are uptight and humorless, we don’t understand the mechanics of comedy, and we can’t handle being the butt of a joke.”

Upon reading anything West writes, however, it is immediately obvious that she is not only not humorless but affirmatively funny as hell, that she has a smart, confident, original voice that rises above the garbage pile of what passes for discourse about feminism on the internet, and that she is refreshingly unafraid and unapologetic. In her debut book, Shrill: Notes from a Loud Woman, West lays everything bare as she describes her transformation from an excruciatingly shy child to a hilarious, assertive lightning rod who has the distinct honor of consistently drawing the batshittiest trolls of all the batshit trolls on the internet.

In discussing personal aspects of her life about which we are conditioned to feel awkward, embarrassed, or exceedingly uncomfortable—like being too fat to fit in a standard airplane seat, getting an abortion, her father’s death, and receiving a letter from her landlord because people were complaining about “sex noise” coming from her apartment—West’s honestly, realness, and humor ultimately render absurd the notion that readers should feel uneasy, and empower them to face their own humiliations and fears with a similarly strong, constructive approach. Plus it’s full of laugh-out-loud-while-reading-on-the-subway passages like this one, which shows up right away on page 2:

“While we’re interrogating childhood clichés, who decided that ‘astronaut’ would be a great dream job for a kid? It’s like 97 percent math, 1 percent breathing some Russian dude’s farts, 1 percent dying, and 1 percent eating awesome powdered ice cream. If you’re the luckiest kind of astronaut ever, your big payoff is that you get a visit a barren airless wasteland for five minutes, do some more math, and then go home—ice cream not guaranteed. Anyway, loophole: I can already buy astronaut ice cream at the Science Center, no math or dying required. Lindy, 1; astronauts nada. (Unless you get point for debilitating low bone density, in which case. . . I concede.)”

For anyone who has ever felt uncomfortable by the everyday work of being human, especially in summer when most of Brooklyn would have you believe that it’s desirable to be nearly naked as much as possible, Shrill provides welcome relief.