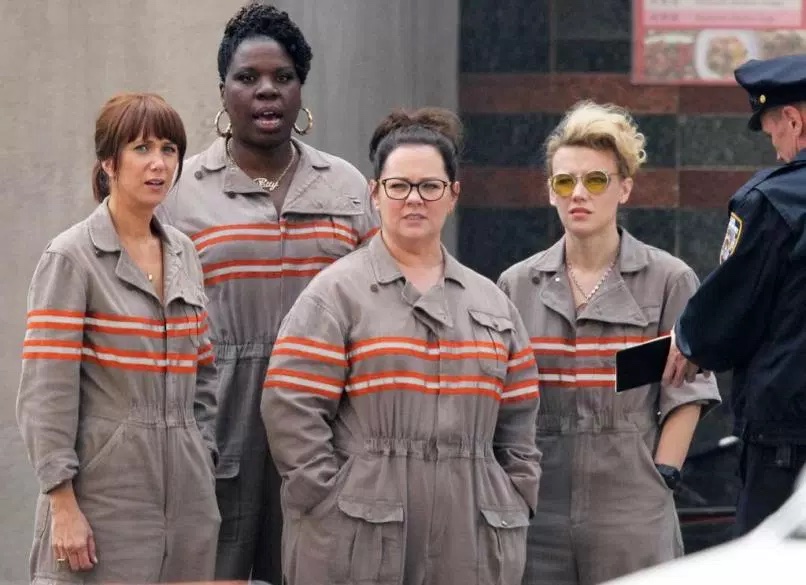 We’ll need to get a few things out of the way before I tell you why Ghostbusters, both the original and the reboot, is a great movie, why it’s not *just* a fluffy comedy, and why you, as a card carrying New Yorker, should go see it immediately, as a point of pride and honor.

Ghostbusters is about GHOSTS and what are ghosts but our own projected fears? What could be more revealing about us as a culture?

Ghostbusters, the 1984 version, is probably the movie I have seen the most in my life.

•I did not view the much hated, and admittedly terrible trailer for the new movie until after I actually watched the movie itself.

•Like many critics of the new movie, I would much prefer a sequel or new chapter in the series to a reboot. And yet, it really is fun to watch and I thoroughly enjoyed it.

•Most importantly, they both highlight the impersonally communal experience of living in New York City.

In the endless, unsolvable internet battle* over whether or not the movie is funny, whether people who don’t like it are misogynists, and whether the critics who did like it and took the time to write about it are simply politically motivated feminists, the two sides keep pointing out that both versions are fluffy comedies that should never be expected to shoulder any sort of cultural burden at all.

That is just not true.
Ghostbusters is about GHOSTS and what are ghosts but our own projected fears–both of the unknown and of things we thought were dead and buried? What could be more revealing about us as a culture?

Prior to the new release I told friends who know about my borderline obsession with the original that in addition to finding the concept of a reboot odd and lazy, I just didn’t know what the new movie could say about living in New York in 2016. Would the ghosts be brokers? Would they haunt only rent-stabilized apartments? Would they be money-bro specters in flip-flops and button downs and loud-talking junior publicist phantasms haunting backyards of bars, shrieking, “Oh my GOD!” into the wee hours of the night?

No, I concluded. I was certain that this reboot would fail in reflecting anything of importance about our city or our culture. After all, I’d go on, the original is a metaphor for urban decay and white flight (ghosts, get it!??). It’s about being afraid of the city you live in. But. It is also about loving that city too much to leave. The final line is delivered by Ernie Hudson, addressing no one in particular, triumphantly hoisting his proton pack above his head and declaring, “I love this town!” even as he’s covered in slime and marshmallow fluff. That’s New York.

So back in 1984 people were afraid of the city. They were afraid of violence that seemed intractable (and indeed, it would be another six years before New York hit peak murder in 1990) and that their city, our city, would be overrun with bad vibes. That they might even have to leave. What are we afraid of in the gentrified era of 2016, with our organic slime and our handmade marshmallows?

It turns out that Paul Feig and Katie Dippold, who wrote the script for the new Ghostbusters, were much more ambitious than I was giving them credit for. The movie is all about being lied to by authority, and, even more potently, not being trusted with the truth. Yes, it is also about an angry, alienated young man who decides to exact revenge on the entire city because he is angry and alienated. I won’t deny the resonance and relevance there, but that’s not the plot point that’s interesting, really. It’s the fact that the Department of Homeland Security and the Mayor’s Office acknowledge to the Ghostbusters that the threat is real, but ask them to pose as frauds in the interest of public safety.

Look at your Facebook feed for five minutes, no matter whether it’s blue or red, and you’ll come across some story about how someone is lying to us about something, whether it’s Benghazi, the dark data collection purposes of Pokemon Go, or whether Michelle Obama is actually a man (unbelievably, this is a real question in some circles–it’s the arms, apparently).

Here, one truth lives on social media and in the streets, where New Yorkers clamor to post selfies of themselves with both the Ghostbusters and the ghosts that require busting. The other, official truth is controlled by the government. There’s a long scene in which after saving a whole concert hall of revelers with selfie sticks from a free floating class-four apparition, the Ghostbusters are hauled into the office of the mayor, Andy Garcia, who has become something of an expert at playing pompous jerks with more power than sense, and ordered to stop detecting and busting ghosts. He and his team claim that no matter what people witness with their own eyes, they’ll always move on to the next thing presented by the media cycle, no matter how scary, essential or revolutionary the event.

Let that sink in for a minute. It comes cloaked in a gag, but the fear that real truth is being kept from us by layers of bureaucracy that range from bumbling to evil, is real. Look at your Facebook feed for five minutes, no matter whether it’s blue or red, and you’ll come across some story about how someone is lying to us about something, whether it’s Benghazi, the dark data collection purposes of Pokemon Go, or whether Michelle Obama is actually a man (unbelievably, this is a real question in some circles–it’s the arms, apparently). This is a real nerve, that resonates with real people, just like the original theme of urban decay did, and perhaps even more broadly.

But what, specifically does that have to do with New York? Yes, this is a cartoon version of our city, even in comparison to 1984, which feels so much moodier and more atmospheric. (The montage toward the end where all the ghosts are released from the containment unit by the evil EPA tool, Walter Peck and they disperse throughout Manhattan bears a weirdly real resemblance to the heavy, edgy tension that builds in the city during a heat wave, to my mind. I know that sounds kind of crazy, but there’s something strangely evocative about that largely silly scene to me.)

In addition to including lots of Pat Kiernan, a running gag about Chinese delivery, a spectral homage to the Macy’s Thanksgiving Parade that’s more like the Nightmare Before Thanksgiving Parade, and a hot Australian in a service industry job, Ghostbusters gets New York right in the sense of cheerful defiance of bullshit authority. There’s a scene toward the end where Mayor Andy Garcia is giving an interview live from Times Square** disavowing the existence of ghosts, and regular New Yorkers walk by behind him shouting out that ghosts, they exist and they have the photos on their phones to prove it. They’re not going to to stop to argue about it (or to sign your petition), but they’re also going to get their two cents in on NY1. Everyone knows the mayor is a shill. Everyone gets that they’re being lied to, but they get on with their days, while not pretending that the sky is green or up is down. They can live with the ghosts, but not with the lie that ghosts don’t exist. New Yorkers do not go along to get along.

It’s that same skeptical practicality that’s required to actually live in our real city together. Winston Zeddemore was right, I love this town. We love this town. To live here, you gotta.

*The actual release of Ghostbusters has done nothing to quell the raging over whether it’s any good or not. Every positive review has been spattered with comments claiming that the reviewer should be ashamed of her lack of objectivity and political agenda. Many commenters reported streams of people exiting the theater and how no one laughed at their screening. Many of those comments were, curiously, posted before the movie was released in theaters, so do that math. The theater I was in wasn’t guffawing wildly, but like the original, it’s not really that kind of funny. It also explains a thing or two about the trailer. Kate McKinnon so thoroughly embodies this gleefully weird science nerd who dresses like she lives in Bushwick, that your delight with her strangeness just grows and grows. But when she first appeared on screen, all quirk and no content, I thought, “Come ON.” There is no way to communicate this character in a trailer that will seem cool. Also, the funniest bits take several minutes to set up, or involve Kristin Wiig muttering to herself. Again, not trailer gold. There aren’t that many laugh-out-loud moments in the original either–much of the humor is Bill Murray smirking around, being a charming asshole. back to top

**Also, if you asked any New Yorker which part of the city ghosts should totally destroy, they would say Times Square.