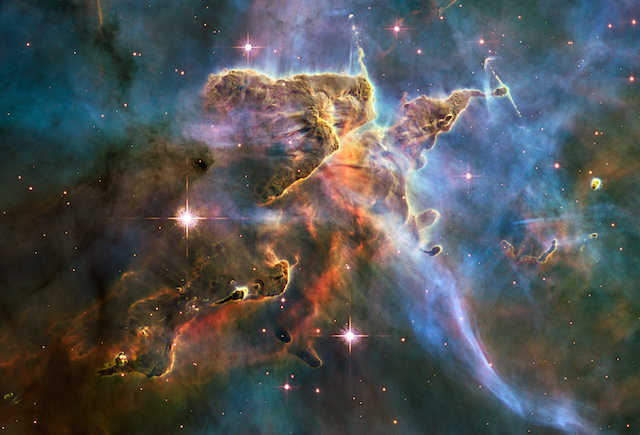 The Orion Nebula as seen by the Hubble Space Telescope. Viewers on Saturday will have VR headsets to travel deep into the Milky Way, accompanied by the Brooklyn Youth Chorus, a Norwegian orchestra and more during “The Hubble Cantata.”

We’re upon the last week of BRIC’s Celebrate Brooklyn! Festival—we know, it went fast for us, too! Before it closes, make the most of your summer and pencil in at least one of these last six performances.

It may sound over the top to say Saturday’s epic event will be out of this world, but it literally does take viewers on a journey to the Orion Nebula, the beautiful celestial feature way out there in the Milky Way, south of Orion’s belt. Cardboard VR headsets will be given out to experience “The Hubble Cantata,” a musical performance featuring a 20-piece ensemble, a 100-person choir, two Metropolitan Opera stars and a VR experience with stunning visuals–all free!

Next Thursday’s benefit show with Herbie Hancock is another must for your outdoor concert bucket list. The 14 Grammy-award winning pianist and composer (and man responsible for one of the greatest songs ever made, the killer video for which won five Spacemen at the first-ever MTV Awards in 1984) will be joined by Jamie Lidell, the electronic jazz quartet Robert Glasper Experiment, and more. Tickets on sale here.

Catch them all or at least one, so you can savor another starry night of music in Prospect Park before the series, and summer ends.