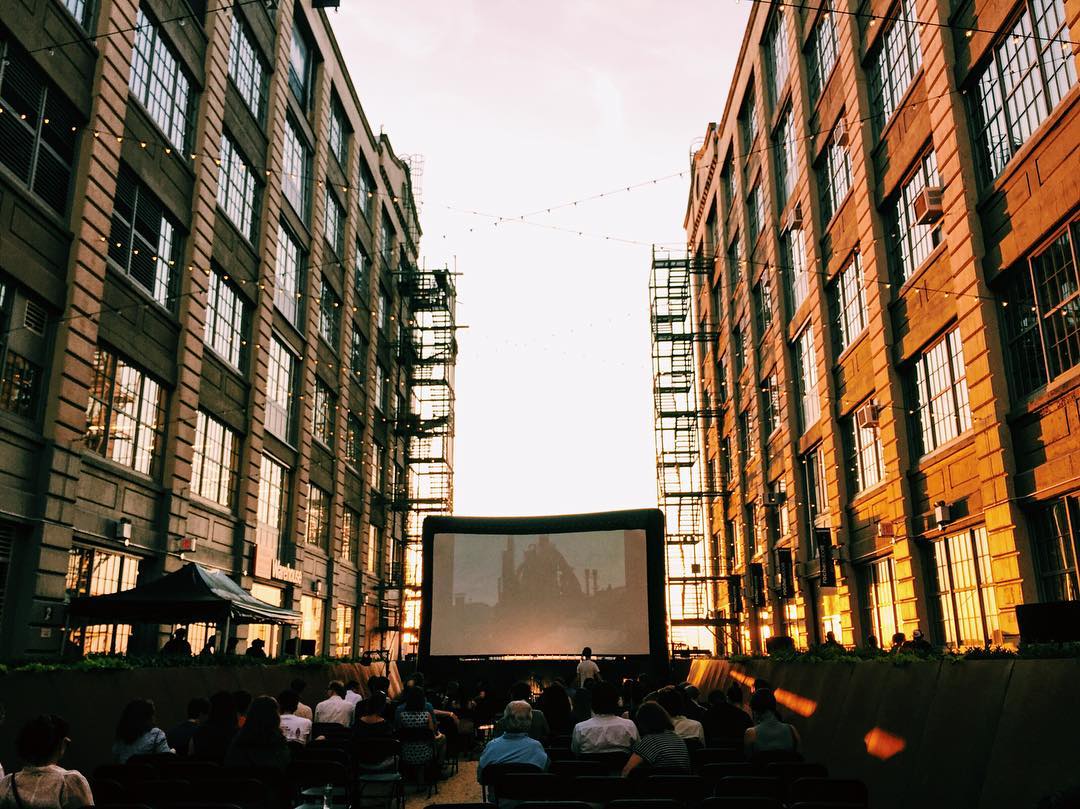 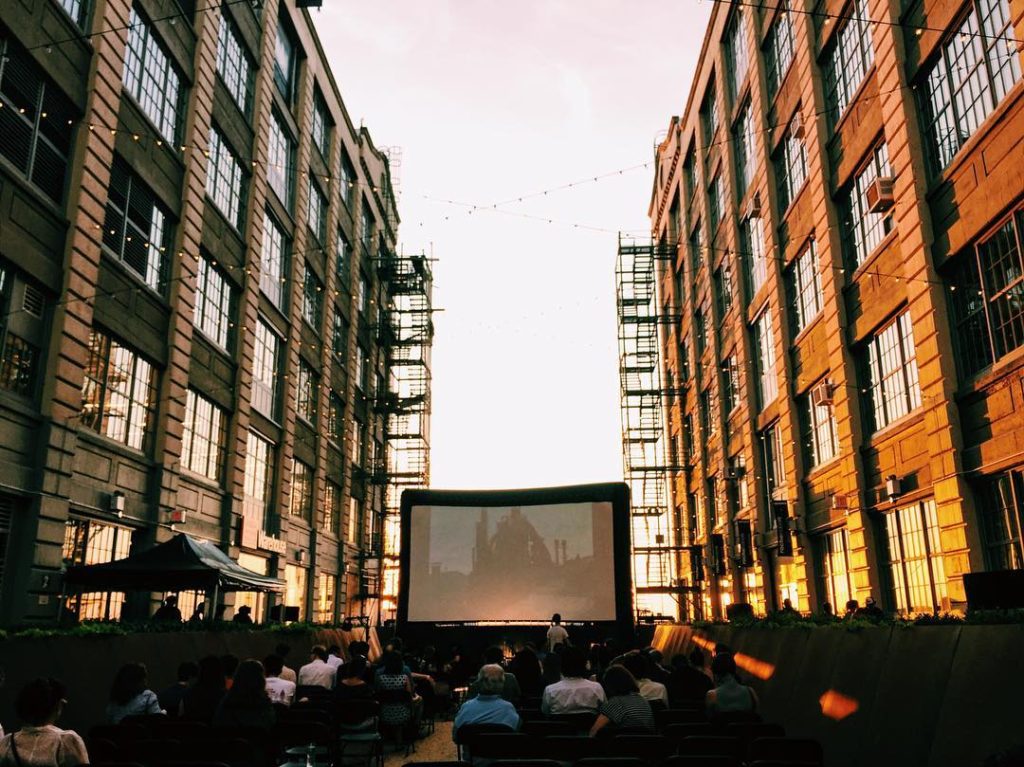 It feels different today, right? In the early morning hours, we’re talking before 7am, there was even a hint of fall in the air for a few moments. It might be a good day to live dangerously and eat your lunch in the park or even take a stroll, for fun, come afternoon.

Speaking of which, is anyone else’s local park looking a little rough around the edges these days? On my way to work yesterday I noticed at least four absolutely overflowing trash cans around McCarren Park. Impressively, park goers were trying to keep it in check and had semi-neatly piled excess trash next to the barrels, but it was pretty clear that no one had emptied them in some time. Then this morning when I took my son to Cooper Park it seemed like the grass hadn’t been cut in weeks and the number of cigarette butts, plastic bottles and assorted trash littered all over the place had really reached peak grossness. I know that summer must be a very busy season for the Parks Department, but we’re not talking about a big storm that brought down a ton of branches and debris. We’re talking regular maintenance. How about some teen summer gardening and landscaping jobs that also involve trash pick-up? And that concludes my New York City rant for the day.

In more adorable news, today through Aug. 21 you can adopt a black cat for free (or a black kitten for $50, usually $125) at the ASPCA’s Adoption Center on East 92nd Street. You’ll even get a free cat carrier in the deal. For those of you plan-aheaders out there, check out this adults-only camp-out at the Bronx Zoo coming up in on Oct. 14-15. Tickets are pretty steep at $350, but they include unlimited beer and wine, plus dinner, s’mores, breakfast, a tent rental and a souvenir mug. I suspect this is a childhood fantasy come true for at least a few of you. Tickets are also on sale for the Eugene Mirman Comedy Festival, which is coming up sooner than you think on Sept. 15-17. These shows always sell out so get your tickets now (and a few extra for your flakier friends), and then feel that smug sense of the well prepared come September. As for this week, whether you want your comedy right now, have always dreamed of entering a kimchi eating contest or just want to listen to smart people have an interesting, civil conversation, we have a whole week of fun planned out for you. Read on, friends.

Thursday, August 18 JT LeRoy, one of the most beguiling characters in fiction, is having a moment. The literary star of the early 2000s, who turned out to be a complete hoax, was invented by a woman named Laura Albert (who dislikes the word “hoax”). This should give you a slight indication of the kind of person Albert is; Author: The JT LeRoy Story delivers a much closer look into her motivations. As our EIC Annaliese Griffin wrote, Albert is “perhaps the least reliable narrator imaginable,” which makes for a very compelling film. Rooftop Films–whose 20 years of weird and wonderful films we recounted  last week–is screening it at Industry City. 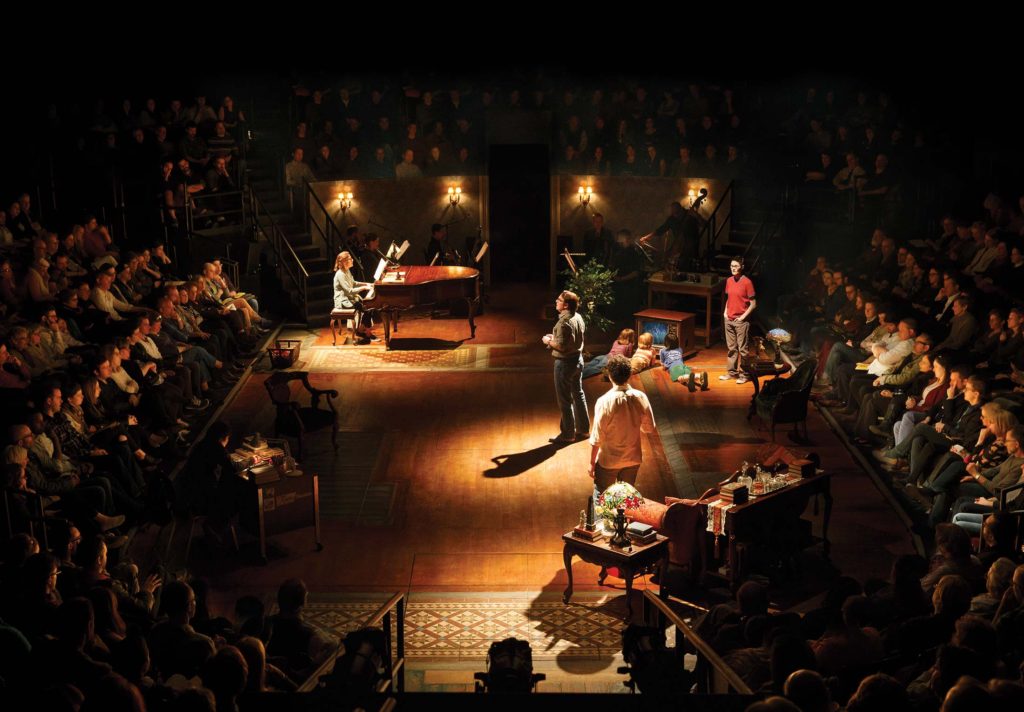 Friday, August 19 Chances are you’ve already gone to the movies at least once over the past few weeks to escape the heat. For an even more memorable, albeit more expensive, entertainment escape, see Fun Home. A number of us at Brooklyn Based went recently and were all impressed by how Lisa Kron and Jeanine Tesori took Alison Bechdel’s famous graphic novel and turned it into a Broadway musical. We were equally split between those who had read Bechdel’s book, and those who hadn’t, and in truth it may work better for the uninitiated. The intimate theater is the perfect setting for this intimate play, which makes all those missed opportunities to connect with a distant parent, painfully, beautifully palpable. It closes Sept. 10, and tickets start at roughly $100. 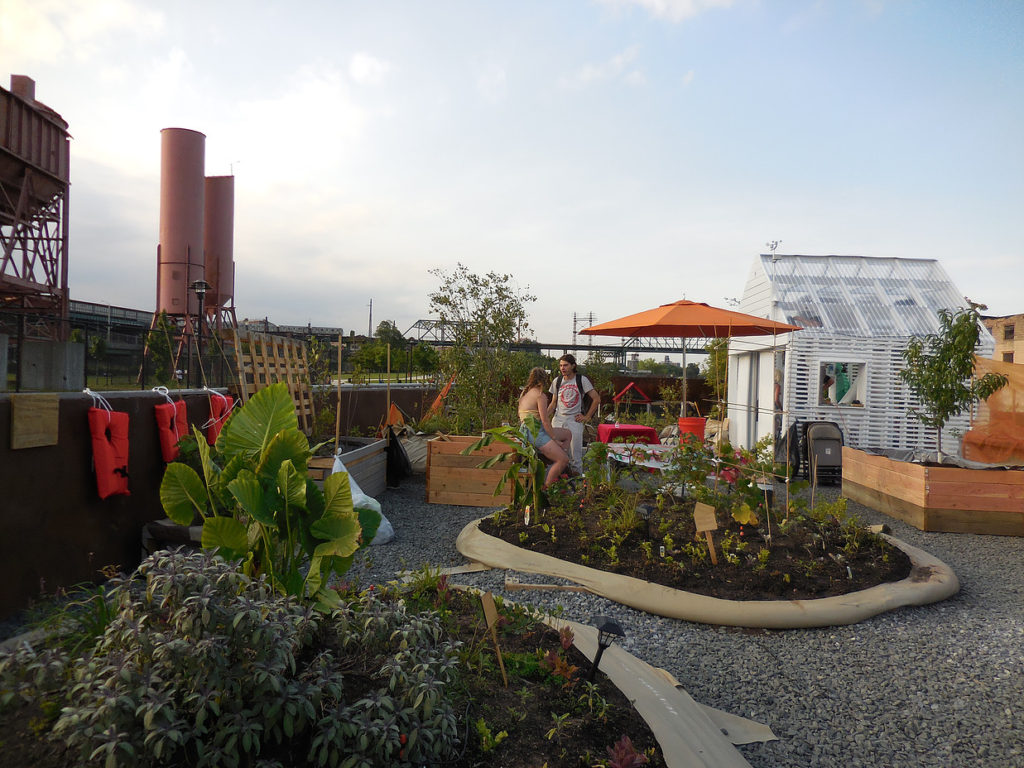 Aboard the floating food forest, Swale. It docked at Governors Island this week. Photo: Swale

Saturday, August 20 When we first wrote about Swale, the floating eco-system/art installation that all of New York is invited to forage from, we knew it was highly unlikely that the timing of its opening would go according to plan. What turned into a summer launch in Brooklyn Bridge Park has shifted to September, but this week it docked at Governors Island. It’s the perfect excuse to go down the longest slide in NYC (again) and set foot on this floating forest, too. The hours are 11am-5:30 Thursdays and Fridays, and 11am – 6:30pm Saturdays and Sundays. 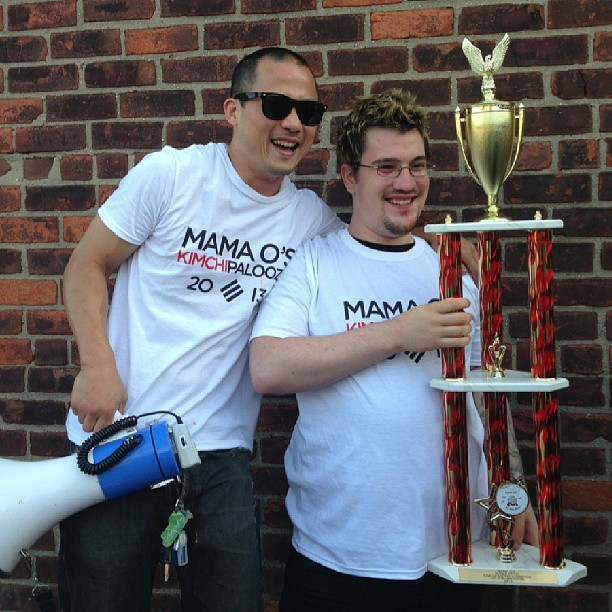 Sunday, August 21 While watching 10 people competitively eat as much ghost-pepper laden kimchi as possible in three minutes sounds like quite a spectacle, that’s not the main reason to go to this year’s Kimchipalooza. The sixth annual festival for this fermented foodstuff takes places this year at Arrogant Swine, where they’ll be pairing Mama O’s Kimchi with Carolina BBQ and beer between 2 and 8pm. Throughout there’ll be live music plus a station where you can make your own kimchi, ghost peppers optional. 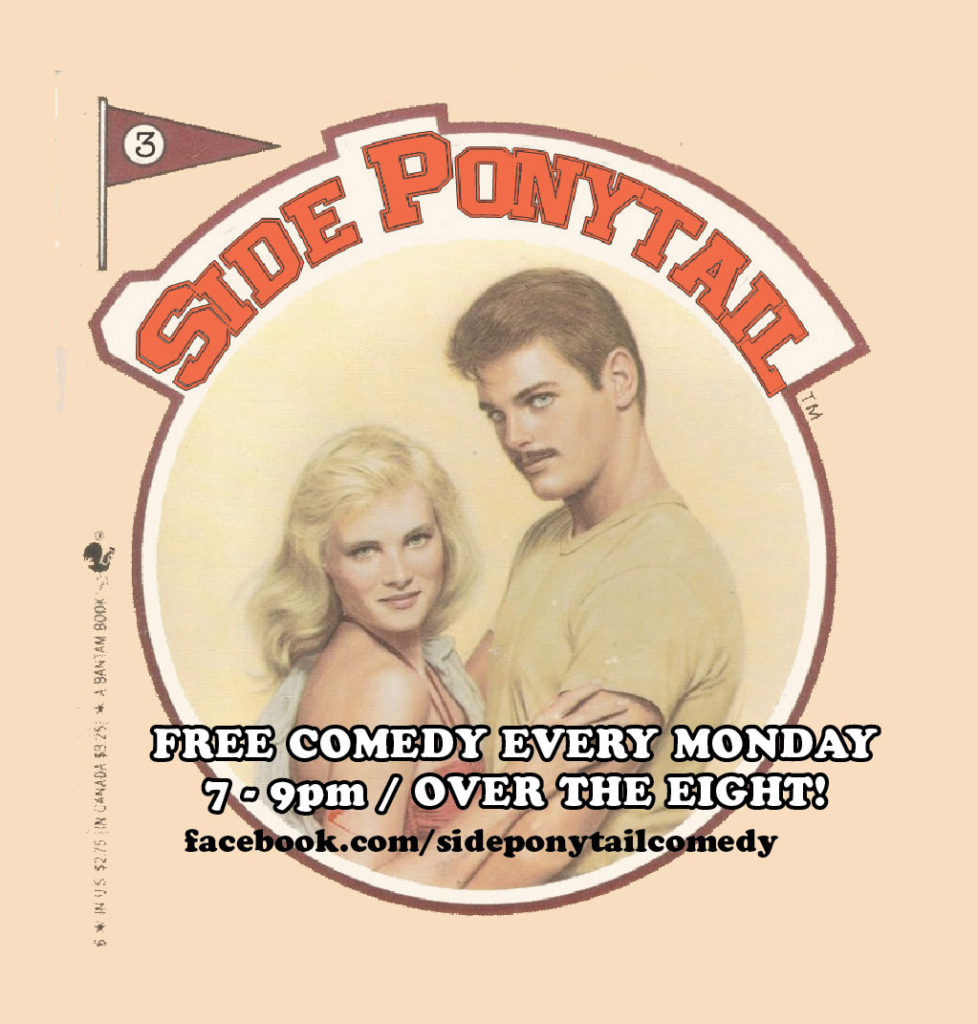 Monday, August 22 You made it through another summer weekend, unable to decide whether it’s actually a relief to return to work for the air conditioning, or whether to panic because Labor Day weekend is closing in on us. Forget your troubles at Side Ponytail, the weekly comedy show at Over the Eight (you know, that bar that was the Royal Oak, got turned into some fancy restaurant that didn’t work, then returned to its divey roots, but with a new and confusing name). Host Carolyn Busa has a lovably awkward stage presence and this week’s free show starts at 7pm and features Josh Gondelman, Rebecca Rush, Lindsay Goldwert, Fumi Abe, Daniel Vezza and free scrunchies.

Tuesday, August 23 The art of actual conversation has become something of a rarity to witness in practice as of late, what with all the yelling, ranting and namecalling that passes for discourse on television and especially on the internet. Greenlight Bookstore’s series Literary BFFs is a real balm for all that verbally abrades. Curated and hosted by David Gutowski of the lit blog Largehearted Boy, this Tuesday the bookstore will welcome Anne Korkeakivi, talking about her new book Shining Sea with pal and writer, Megan Mayhew Bergman. 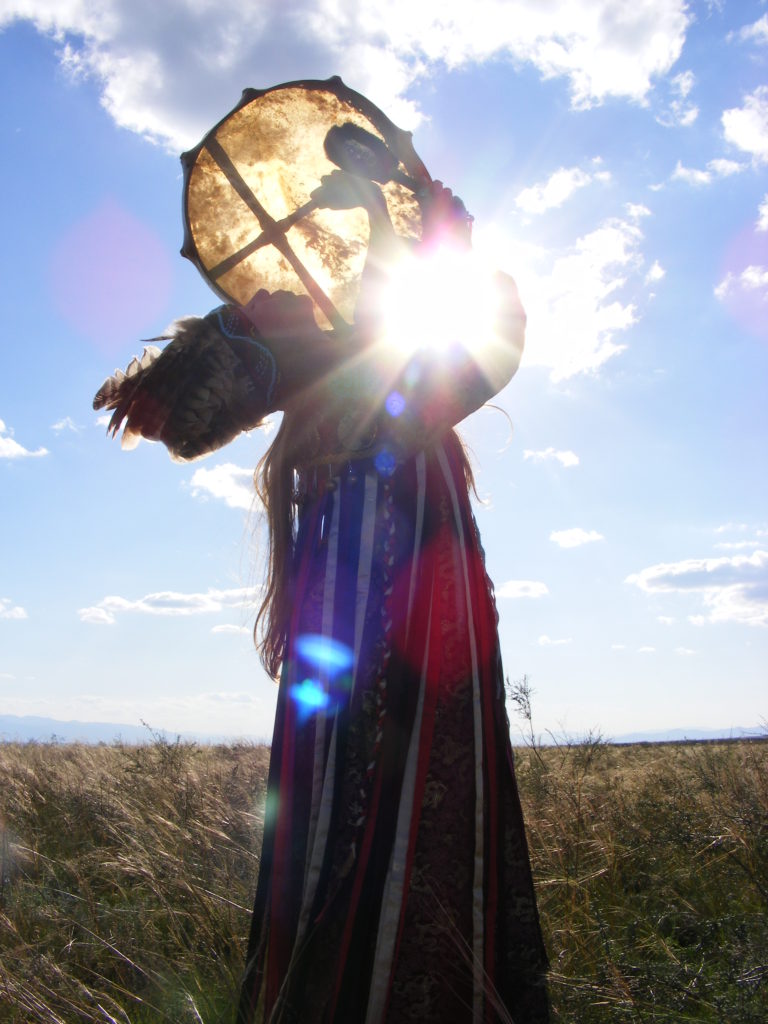 ChokBar is from a long line of Tuvan shamans. Photo: Rubin Museum

Wednesday, August 24 If you’ve never been to the Rubin Museum in Chelsea, it’s time to visit this undersung cultural institution filled with the art and cultural objects of the Himalayas, India and Central Asia. The usual $15 admission is waived on Friday nights from 6 to 10pm, during which there is usually some variety of musical performance in the museum café along with drink specials, and of course this includes free air conditioning. This Wednesday though, the Rubin is hosting a shamanic power animal workshop with ChokBar, a native Tuvan shamaness. There are only $20 tickets for observers still available, but it still promises to be a fascinating evening.