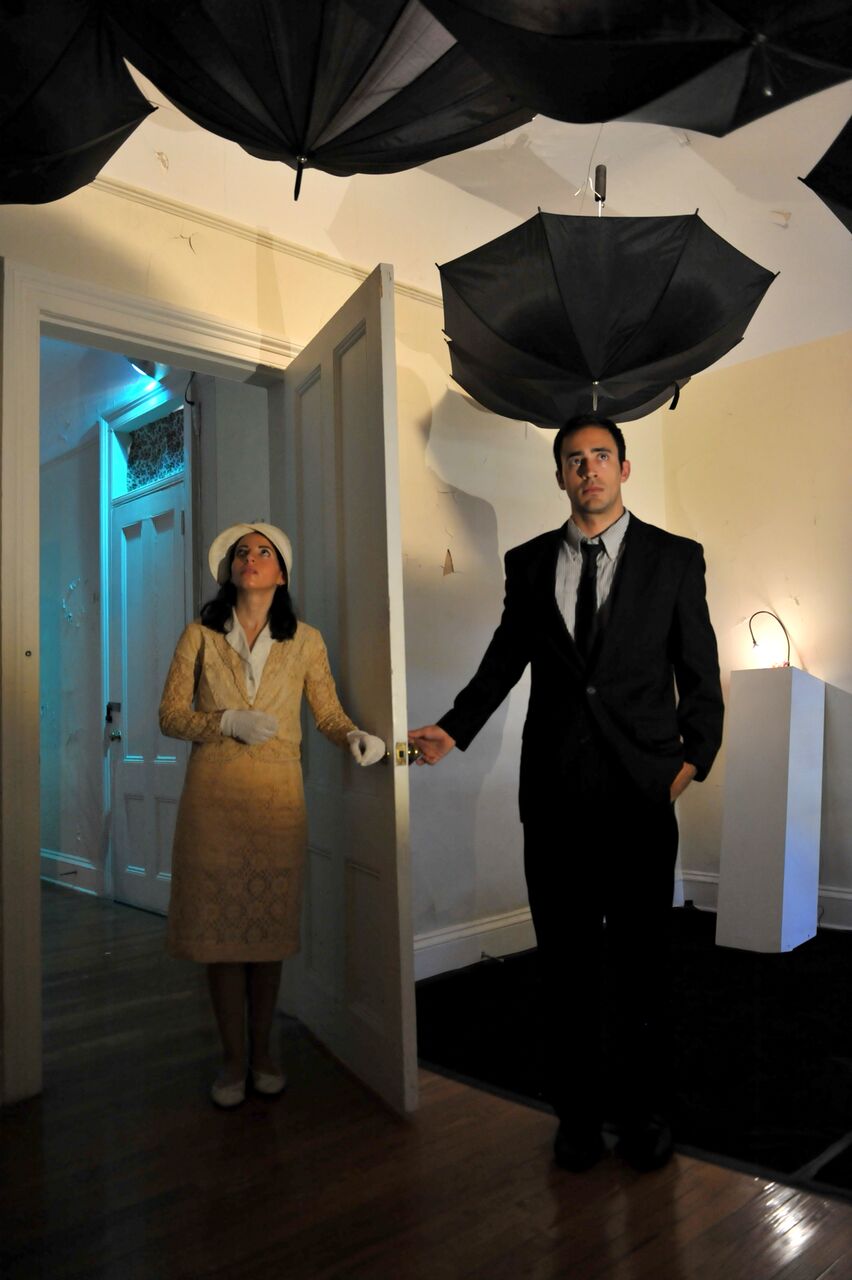 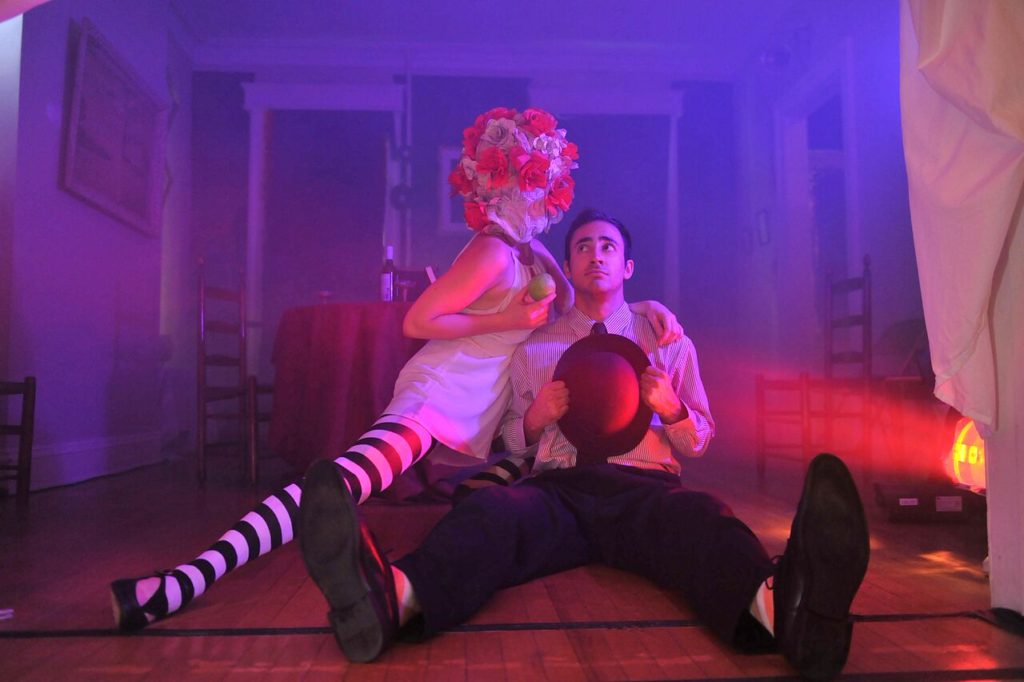 Even your wildest adventures in New York City apartment hunting won’t prepare you for the tour of House 17 in Nolan Park on Governors Island that is The Enchanted Realm of René Magritte. Conceived, produced, and directed by Exquisite Corpse Company, this site-specific play is a skillfully envisioned interactive piece of theatre that invites you into the life, the loves, the art and the home of the iconic surrealist painter.

We meet René (and his bowler hat) just a few minutes in, as he explains that he’s trying sell his childhood home following the death of his father. René (played delightfully by Max Henry Schloner, who manages to combine near-perfect strokes of charm and neurosis) doesn’t just want to leave his home; he wants to tear himself away from the ghastly clutches of his memories, which include hallucinations of his suicidal mother (Blair O’Leary, wet-haired and wild-eyed, terrifying and wonderfully effective), and a mysterious gentleman named Mr. Fish (superbly comedic Lee Collins), who may or may not be a fragment of René’s consciousness. 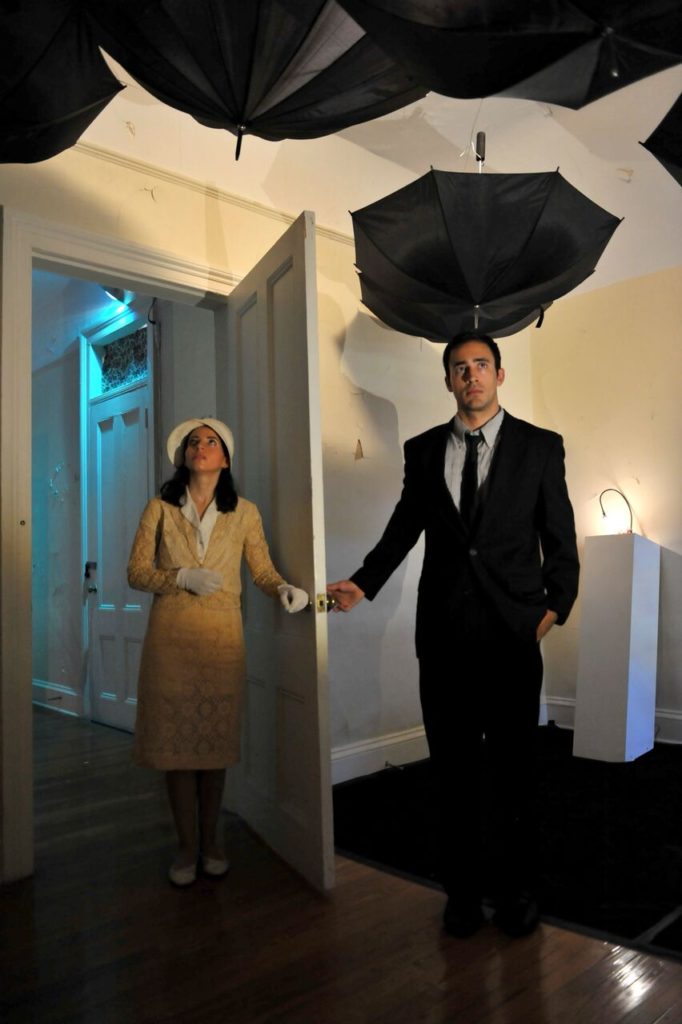 The 15-person audience is led from room to room, following the course of Magritte’s life. In one of the play’s standout scenes, we’re thrown back in time to when 13-year-old René first meets Georgette Berger on the playground, a young girl who would become his wife and muse many years later. Anya Krawcheck fuels the play with wit and soul, her very relatable Georgette lovelorn and self-aware–a total pleasure to watch.

As time moves forward, the audience waltzes across René and Georgette’s wedding, suffers through the effects of wartime on Brussels, and finally peers into the affairs of both René and Georgette. René becomes infatuated with his mistress, Sheila Legge (O’Leary), while Georgette’s marital misery leads her into the arms of René’s good friend Paul (a splendid Danny Wilfred, who also choreographed the show). Captivated by both sides of the story, the audience plays witness to the unraveling of the lives of both Magrittes. 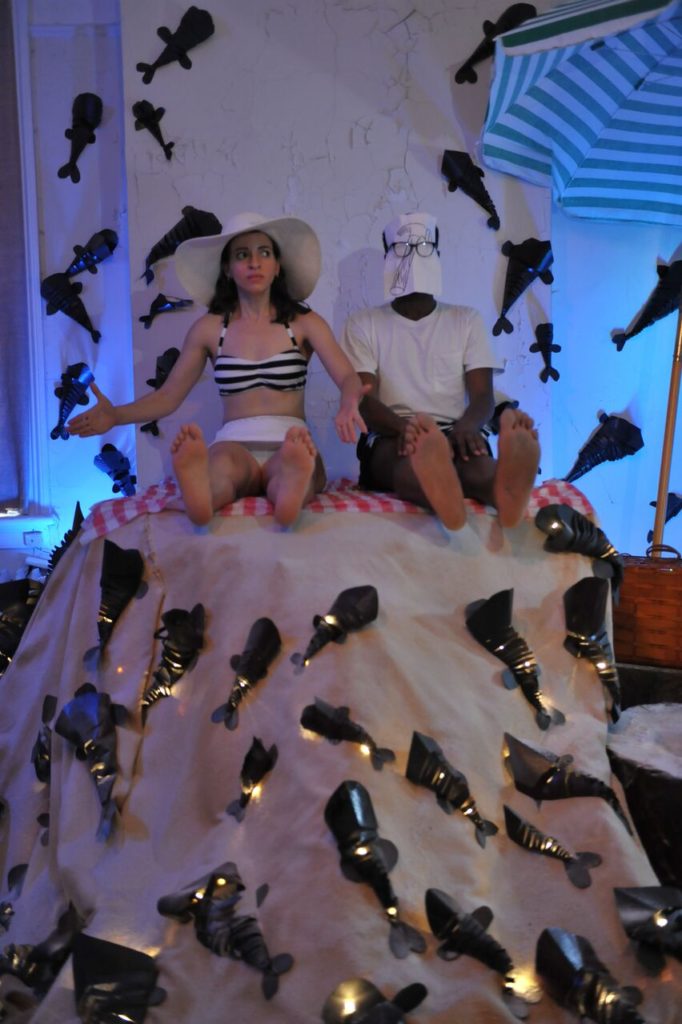 The Enchanted Realm of René Magritte is a collaboration between eight playwrights–the dialogue comes and goes in bursts of poetry and surreal musings. There are modern day references, expert little flourishes that do not take you out of the story, but elicit well earned laughter. The art direction deserves a standing ovation for the ingenious design of the house’s eight rooms. Those visuals guide the audience just as much as the dialogue. Magritte’s iconography threads vividly through every room, floating umbrellas and green apples and masked bodies, even the giant mouth of a trout in a room in which every inch of the walls is covered in seashells. Of course, none of this would have been possible without the play’s visionary and director, Tess Howsam.

Governors Island is a surreal place in itself. A quick ferry ride grants you access to a grassy island where you can swing in a hammock surrounded by wildflowers, or climb a rocky hill for a breathtaking view of downtown Manhattan. It’s the perfect macro setting for a play like The Enchanted Real of René Magritte–when you step out of the darkened house you need a minute to extract yourself from Magritte’s eccentric world and remember how you ended up standing on an island in New York Harbor in the first place.

Performances of The Enchanted Realm of René Magritte will run every Saturday and Sunday at 1pm and 4pm through Sept. 25. Tickets are $15 and sell out quickly.