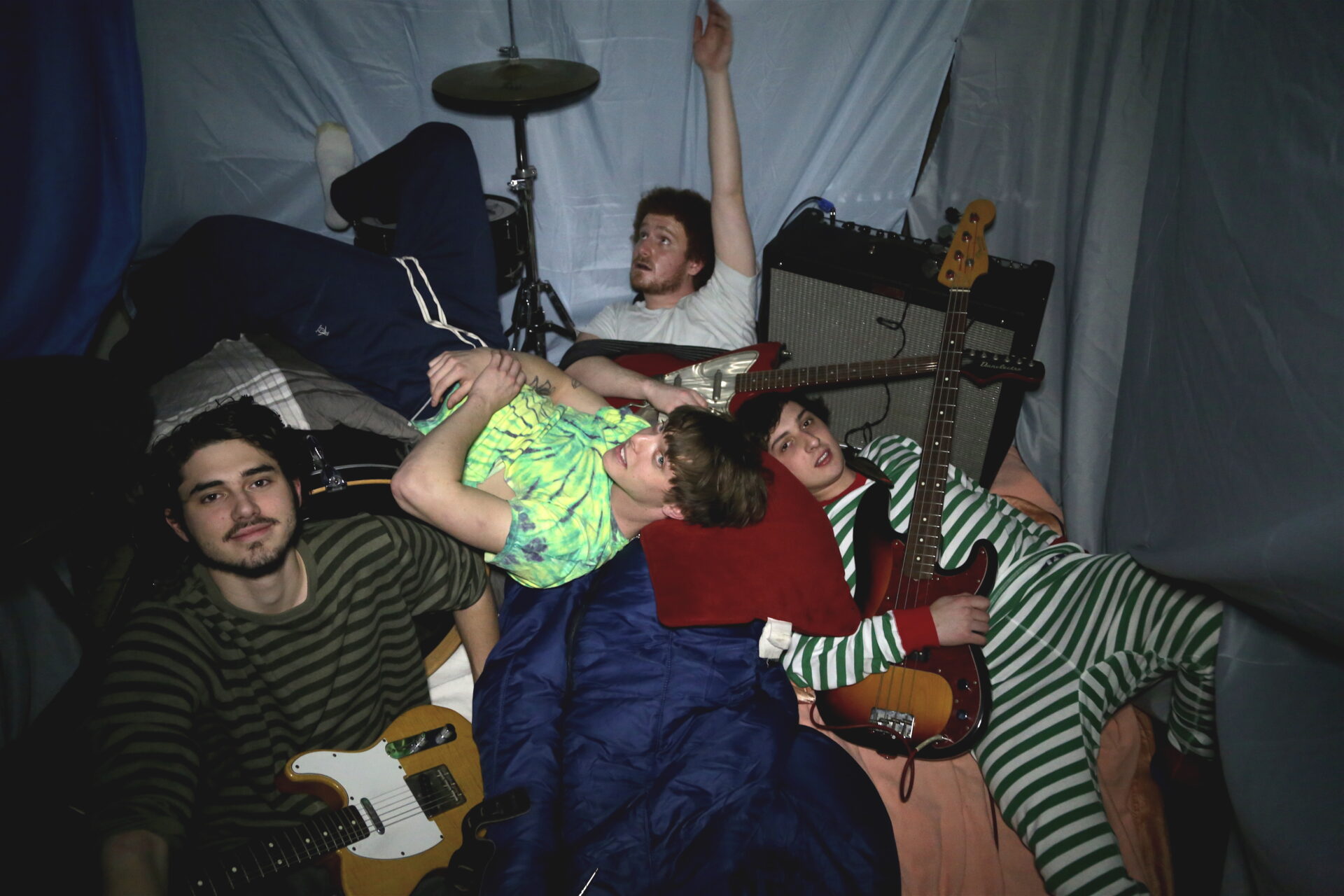 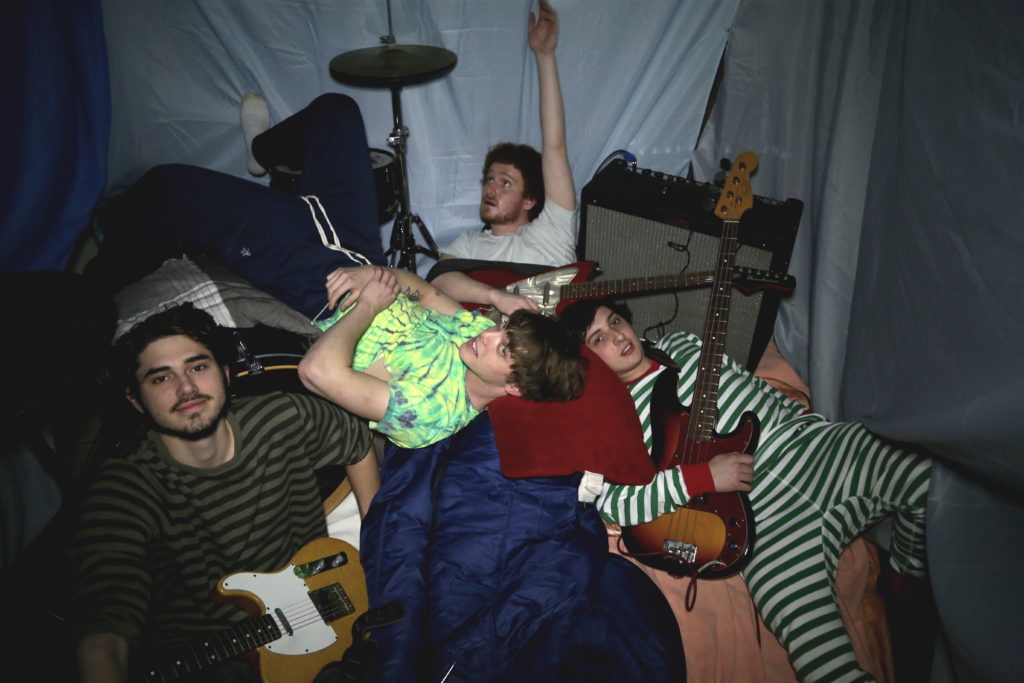 Active Bird Community, just paling around like they have been since 6th grade. Photo: Grandstand HQ

The video for the single “Pick Me Apart,” by Brooklyn indie rock band Active Bird Community employs a simple concept–it’s just four guys happily rocking out with their instruments inside a fort made out of blankets. That charming, DIY aesthetic is in step with the group’s music, which is direct, energetic, spontaneous guitar-focused rock. It seems to be generating some buzz for the song, which recalls Weezer with its ringing guitars and yearning vocals, and has already generated over 1.6 million plays on Spotify.

Brooklyn Based recently spoke with Active Bird Community’s Tom D’Augustino and Andrew Wolfson about the video for “Pick Me Apart,” the band’s history, and a preview of their new record.

The recent video for “Pick Me Apart” is very whimsical and fun—especially with you guys rocking out in a blanket fort. How did you arrive at the concept for the video and where was it shot?

Tom: The majority of it was shot at my parents’ house upstate in Lake Carmel, N.Y.  The blanket fort shots were done in our basement at our old apartment in the Bronx. The concept definitely changed a few times as we tried to figure out what we wanted the video to feel like. Eventually, we decided that we wanted something a bit more honest than just shots of us looking cool and stuff so I figured why not include my family and best friends. I wanted the video to seem like an attempt at reconnecting with your childhood and my little sister Kaitlyn really helped that come to life I think.

Bands that have influenced me the most are probably the Pixies, Built to Spill and Neutral Milk Hotel.

What’s the story behind the song?

Tom: While the video explores feelings about childhood and family relationships, the song itself deals more with long-distance relationships. The ways they can often make everything seem to drag on when you’re apart or seem like a joke.

This year you released a song called “Longport.” Can you also say anything about the song—inspiration, recording it, etc. And will that be on the upcoming record?

Andrew: I wrote “Longport” when I was 14. It was written about an actual squirrel that I saw in a little beach town in New Jersey called Longport. When I wrote it, it was supposed to be a children’s song for my little cousins. We’ve played “Longport” in ABC since high school, but this recording of it was the first time I had ever brought it to a studio. It will not be on the next record. He will always be the lone squirrel.

How is the new record coming along?

Tom: Our new record is mixed and mastered and ready to go be released this January. It was recorded in New Paltz at Salvation Recording Co. by Christopher Daly and mastered by Jamal Ruhe at West West Side Music. I think this record is a bit more focused than I’ve Been Going Swimming, which was more of a collage of songs that we had written since we were in high school. Our new album was written during our senior of college and the songs all occupy a similar head space. I think stylistically we’re a bit tighter, more locked in – definitely more energy in certain aspects.

I think it’s because it’s a reminder of when we were younger, when were just middle schoolers trying to write songs.

I have to say that “Pick Me Apart” and I’ve Been Going Swimming are my initial introductions to your music. When did you guys form the band and how did you all meet?

Tom: We started the band when we were in 6th grade. We’ve all been best friends since we were kids and I think that’s what has kept the band going for so long. We all grow together in different ways and have the same history to draw on, making song writing a really exciting process.

Based on what I heard from I’ve Been Going Swimming—which is really good–your sound is very indie and intense at times but also melodic and atmospheric. I know this is a very broad question, but where do you draw that from—any particular musical influences or is it just something that happened naturally?

Tom: I  can only speak for myself, but I was always really into music from the 80’s and 90’s, bands that tried to take traditional rock music to a more interesting place. Bands that have influenced me the most are probably the Pixies, Built to Spill and Neutral Milk Hotel.

I’m sure you get asked this a lot, but I’ll bring it up anyway: How did you get your name?

Tom: There’s no real interesting story behind it. We had a lot of different names thrown around before we landed on Active Bird Community. With plenty of opportunities to change it to something smoother or cooler, we could never quite do it and I think it’s because it’s a reminder of when we were younger, when were just middle schoolers trying to write songs.

Active Bird Community will be performing September 28 at The Bowery Electric, 327 Bowery, Manhattan, 8pm; and November 1 at Shea Stadium, 20 Meadow St., Brooklyn. The band’s most recent album is I’ve Been Going Swimming.