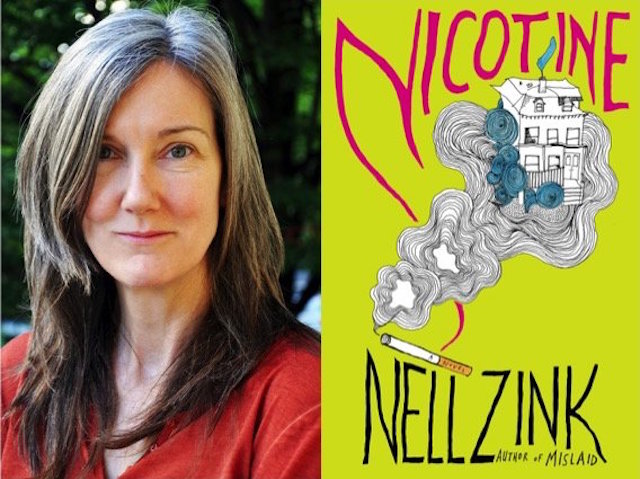 The only thing that might be more radical than the plot of Nicotine, is author Nell Zink’s imagination. Publisher Ecco.

The epic myth around novelist Nell Zink precedes her books. For instance, before I picked up her new novel, Nicotine, I knew that Zink got her start as Jonathan Franzen’s pen pal talking about birding, about which they both are passionate. Franzen, possibly America’s most famous living novelist, implored Zink to publish. Her first book, The Wallcreeper, came out in 2014, and her second Mislaid, was published in 2015. I also knew that Zink churns out her books complete (including revisions) in three weeks total. The excitement around the author offers up the impression of a recent college grad, instead of a 50ish expat who spent the 90’s editing a punk zine. Forging her own path, Zink has created a buzz by being the publishing world’s L’Enfant terrible, but at 50 rather than 20.

Nicotine’s plot, in summary, follows a recent business school grad who finds meaning and adventure when she moves into an inherited Jersey City squat, occupied by nicotine-abusing anarchists. That may sounds simple, but nothing in Nell Zink’s book is so exacting or linear. Take the first line: “A thirteen-year-old girl stands in a landscape made almost entirely of garbage, screaming at a common domestic sow.” From there, that girl, Penny, untangles herself from her unusual family by watching her cult leader father die in hospice, learning the truth about her mother (who may also be her father’s adopted daughter), observing her psychopathic brother’s derangement, and understanding her other brother’s reclusion.

At the heart of the novel is Penny’s unrequited relationship with the asexual Rob, who spends his time finding and fixing bicycle frames. Zink expands the everyday love triangle to an octagon, involving family members, “radical feminist freaks”, and polyamorous cross-country affairs. In between, there are theories on consumerism, capitalism, communes, and the crossroads of privilege and nepotism.

The story is almost like a modern day Little Red Riding Hood, with the woods being New Jersey and the wolf being “the bucket monster”, an intricate bucket system full to the brim of old feces from the Nicotine squat house. In this fairy tale, guns and cigarettes are sacred objects, and the quest is in finding and maintaining a sense of community. There is a convergence of ideals between millennials and aging hippies, and an entire crazy family precariously finding their way forward. This book is funny not in a “ha-ha” way, but more in the author’s satirical approach and commentary. Zink is a confident puppet master, and her characters go off the deep end again and again, resulting in a unique read that stands firmly outside the mainstream, where reality is as ephemeral as a puff of smoke.