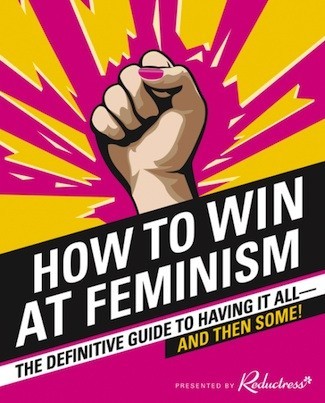 “Should I be planning a funeral for my sense of humor?” I wondered during the second presidential debate, as Donald Trump loomed behind Hillary Clinton and then threatened to have her jailed. I should have been laughing at my friend’s Jaws jokes, but instead I climbed underneath the bar, hugging my wine and wishing for Xanax. Before I started sitting shiva for my laughter, however, I remembered that amid the steady stream of alt-right memes and clips of Trump telling Billy Bush exactly where he likes to grab women, the internet also provides escapes from the political melee swirling around us. Reductress is one of the best ports in the storm.

Billing itself as “the first and only satirical women’s website,” Reductress, which launched in 2013, applies its simultaneously absurdist and biting humor to the conflicting streams of advice thrown at women on a regular basis. It’s that balance that makes the site worth returning to. Plenty of writers are as precise and cutting, and others just as wacky and absurd, but it’s the blend that makes Reductress stand out. Their targets include not only the mainstream women’s magazines (parodies of which are low-hanging fruit at this point), but the personal essay industrial complex, make-up blogs, and corporate attempts to cash in on feminism. The articles have an Onion-like sensibility (“Danielle Doesn’t Usually Post on Facebook, But This Is Important“), but with a keen ability to mock the tone and format of so much of women’s media (“I’m Not a Basic Bitch. I’m a Boring Woman.“).  Other must-reads include make-up tips from clowns (“foundation, foundation, foundation”), and my current favorite: “100 Acts of Self Care That Still Won’t Be Enough to Get You Through The Election.”

After three years of eliciting laughs, groans, and knowing sighs from their readers, founders Beth Newell and Sarah Pappalardo are gifting readers with Reductress’s first book, How To Win at Feminism: A Guide to Having it All (And Then Some), out next week on Oct. 25, with a launch party at powerHouse Arena in DUMBO that evening. Editors Beth Newell and Sarah Pappalardo told me that they’d been interested in writing a book from the beginning, but feminism’s ever-increasing mainstream acceptance (or co-option) was the inspiration for chapters like “How to do more with 33 cents less” and “The nine circles of hell for women who don’t help other women.”

I chatted with founders Beth Newell and Sarah Pappalardo over email about the book, the site, and staying both funny and sane even when current events are making it harder than ever.

How did you come up with Reductresss?

Beth Newell: I’d been directing some sketch shows for women and writing my own shows based off of certain things I was seeing in women’s media. Certain topics just kept coming up over and over again and I wanted to have a place to write about them.

Sarah Pappalardo: Yeah, we were both feeling like there wasn’t enough of a home for female-driven content, and there were no devoted spaces where people were satirizing women’s media, so Reductress was a way to showcase female-driven content with a specific satirical goal in mind.

How did you two (Sarah, Beth) meet, and who else works on the site?

BN: We met doing sketch comedy at the Magnet Theater here in New York. We currently have an associate editor, Nicole Silverberg, two staff writers, Jasmine Pierce and Taryn Englehart, and a slew of contributors.

Why write a book? And how does a website that evolves constantly translate into a book, which is more static?

SP: We were tossing around the idea of a book since the advent of the site, but found the most inspiration when feminism started infiltrating pop culture and the mainstream–which were in many ways, good, and in other ways, a very reductive and problematic brand of feminism. We had definitely been playing with this idea on the site, but the book was a great opportunity to hone in on this particular topic, nuances and all.

BN: Feminist issues are a recurring theme on our site, though obviously not the only thing we cover. Writing a book allowed us to cover those topics more fully. It was an interesting challenge to try to write about certain issues in a more evergreen way, with the hopes that the chapters would still be relevant a few years from now.

Have there been any moments when it’s been harder to be funny, especially during the current election season? And how do you work through it?

BN: It’s been really hard. The sexism that Trump wholly embodies is very triggering. It takes time and energy to process it all before we’re ready to be funny. I think self-care is really important but unfortunately between work and family and pumping milk from my boobs, there isn’t much time leftover for that at the end of the day.

SP: It’s painful stuff, and the closer you are to the problems we face today (whether you’re a woman, a person of color, an immigrant) the harder it is to metabolize the news and approach it with a critical eye for comedy. Sometimes we just sit and talk it out in the office until we find what’s absurd about it, or find a critical angle to approach it from.

The rape issue was one of the most effective commentaries on rape culture I’ve seen in awhile. How did you come up with it?

BN: We knew we needed to write something about rape culture, because of the ignorant ways it was being discussed by certain members of our community and the effect that was having on us. We asked writers for pitches and got an overwhelming response–it just made sense to takeover the whole homepage.

SP: Yeah, there was such a barrage of information going around–not just about rape itself, but about the reactions to rape, and reactions to that, so on and so forth. There was just so much to talk about, we just tried to tackle every major angle of rape culture that we could fit on one page.

Any situations where people didn’t get the joke?

SP: All the time. We see it a lot in first-person opinion pieces where people think the person is real or really has those opinions. For example, a lot of people really believed this piece was real: “We’re Piercing My Baby’s Tongue: Here’s Why.”

Personal favorite articles since the site started, and why?

BN: That’s hard. There’s so many. I do love “I’m Not Political (Because I Assume I Will Retain All of My Privileges Forever)” because I’ve seen so many people make a variation of that statement.

SP: One of my personal faves is “We Call it a Book Group, but all We Do Is Drink Wine and Worship the Devil.”

How does the site fit into the rest of your careers? And any plans for the future?

BN: The site is a full time job for us, but we’ve tried to make time to branch out into side projects like the book, our Mouth Time podcast, a stage show, and hopefully more.

SP: Yep, we have a lot of side projects in addition to the site itself, so it does take up our workweek (and then some!). We are both comedy writers so we will probably always be finding an outlet for that.