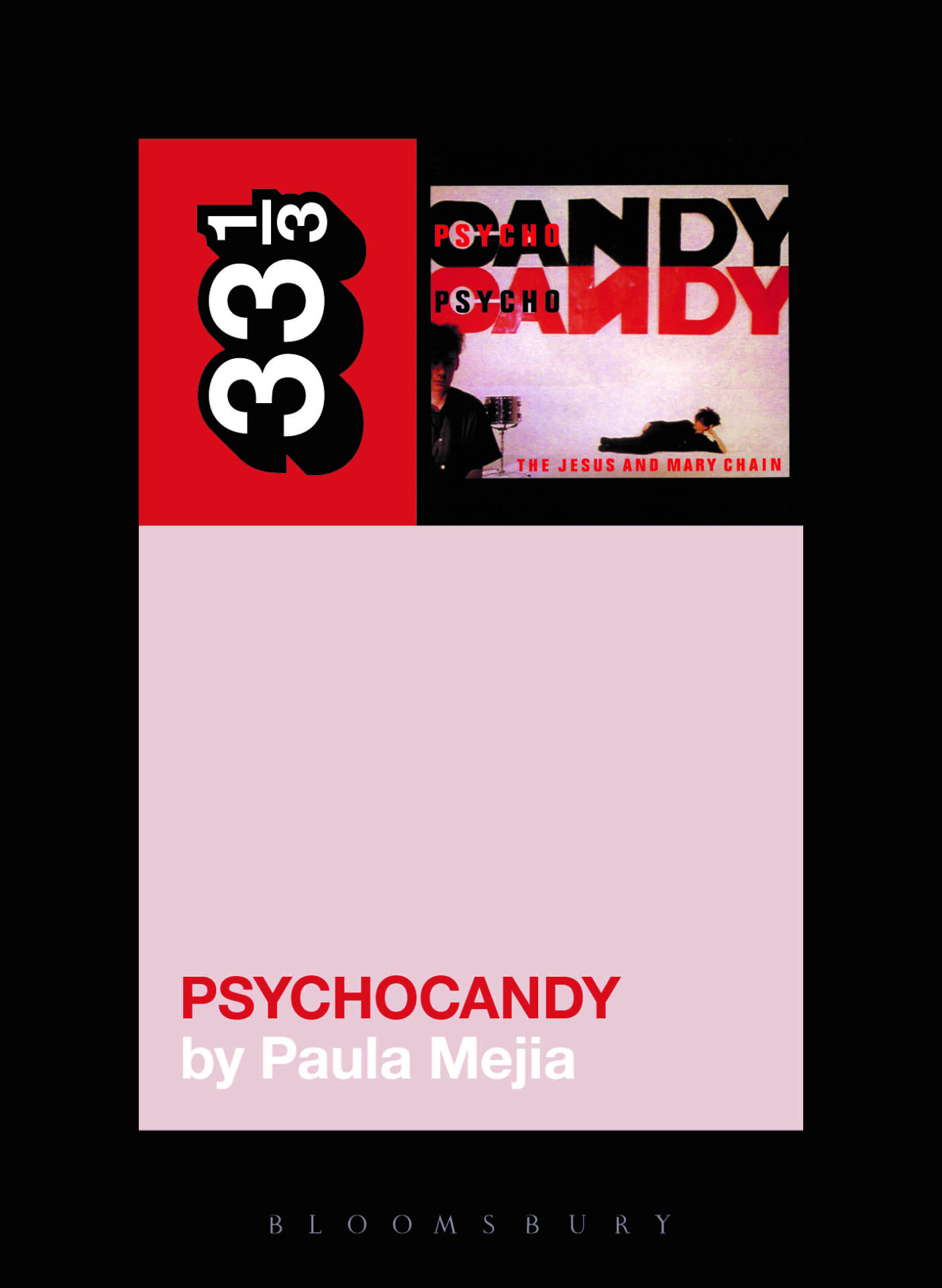 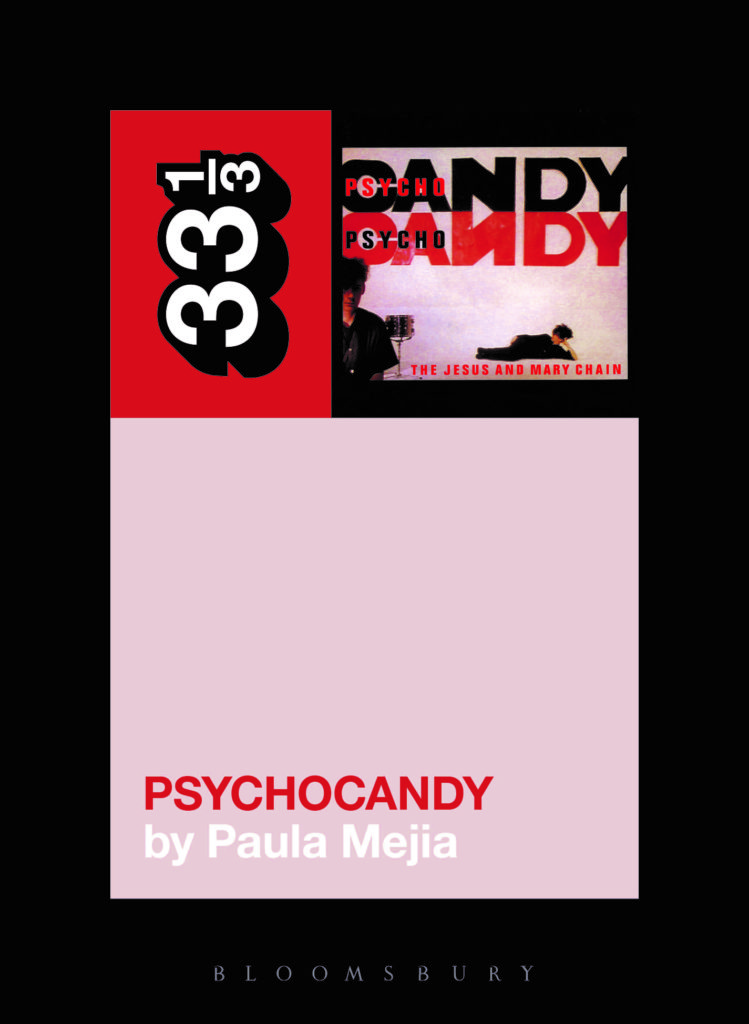 A few years ago Paula Mejia had to pick a topic to write for her thesis as a student at George Washington University’s English graduate program. Around that same time came the call for new proposals by Bloombury’s 33 1/3 book series, each of which spotlights a particular noteworthy album. “[Professor and author] Gayle Wald was my thesis adviser at the time,” Mejia says now, “and I went into her office and I said, ‘I have a crazy idea. Can I write a thesis that is academically-rooted and use it as a way to enter this proposal for the series?’–not expecting it to get picked up at all.”

Mejia’s eventual choice was the Jesus and Mary Chain’s 1985 debut record Psychocandy. An album that has since gone on to become a bonafide classic, Rolling Stone ranked it as one of The 500 Greatest Albums of All Time, Psychocandy combined heavy feedback-drenched guitar, reverb production, moody lyrics, and catchy girl-group pop melodies into a glorious noisy rock record, courtesy of Scottish brothers Jim and William Reid. You can hear traces of the group’s influence on ’90s British shoegazing bands like My Bloody Valentine and Slowdive, as well as current acts like Black Rebel Motorcycle Club. A few years ago, the Jesus and Mary Chain did a series of shows to commemorate Psychocandy‘s 30th anniversary.

“The perception that they gave that they were either totally freewheeling or didn’t give a shit. It’s so surprising to know that they stayed up in their bedroom, drinking tea, and meticulously plotting out this whole thing. It was all premeditated. For that to seem so effortless is kind of an incredible skill in itself.”

What started out as a thesis idea for Mejia–a Brooklyn-based freelance music writer whose stories have been published in Rolling Stone, Pitchfork and The New York Times —has now become the latest addition to the 33 1/3 series. Featuring interviews with the album’s main participants, including singer Jim Reid, bassist Douglas Hart, and drummer Bobbie Gillespie (later of Primal Scream), Psychocandy the book not only discusses the album but also provides the social and cultural context behind the music.

To coincide with the book’s publication, Mejia will be appearing at Greenpoint’s WORD bookstore on Oct. 25 in discussion with Rolling Stone writer Rob Sheffeild and Kristen Yoonsoo Kim. Mejia recently spoke with Brooklyn Based about the genesis of her book and love for the Mary Chain.

What was your earliest introduction to the Jesus and Mary Chain?

I had heard of the Mary Chain when I was really getting into shoegaze. I was obsessed with My Bloody Valentine. Through the entryway of Loveless, I got into Chapterhouse, Lush, Slowdive, and the Mary Chain. Even though [the Mary Chain] are not technically a shoegazing band, they’re kind of associated with that scene at least sonically. I remember vividly hearing [at my college radio station] “Deep One Perfect Morning” from Darklands [the band’s second record], and I remember turning it up super loud on the monitor speakers and just being totally rattled in a great way by it. After getting into Darklands, I really got into Psychocandy.

Why did you choose this particular record for your thesis/book proposal?

What I did one day, I got a notepad and a pen and I just listened to three albums that I loved and thought had deeper stories than what I knew at that time. And that was Psychocandy, On Fire by Galaxie 500, and Tender Buttons by Broadcast. I put on all those three and I did this free association thing where I wrote whatever came to mind when I listened to them. By the end, Psychocandy by far had the most notes and stuff that surprised even me. And it’s an album that I loved for a long time. I was curious about deconstructing it a little bit more.

What did you want to address in this book?

Something that was always central was how these seemingly dueling elements came together in such a cohesive way. You have the dissonance and incredible feedback, and then the sweet pop melodies at the core. I love the interplay between those two things. In any other circumstance, they wouldn’t seem to fit together at all. But with this album, it was perfect. So deconstructing the psycho and candy part of it was always central to it.

What was totally surprising for me was the fact the band wanted to become pop stars from the very beginning. I always had the impression they were anti-mainstream.

And that was something was a revelation to me too as I talked to them as I dove more into this. The perception that they gave that they were either totally freewheeling or didn’t give a shit. It’s so surprising to know that they stayed up in their bedroom, drinking tea, and meticulously plotting out this whole thing. It was all premeditated. For that to seem so effortless is kind of an incredible skill in itself. So that was definitely surprising for me to hear too. I love that because it gave them such an edge.

The climate of the time in Britain during the early ’80s–particularly Thatcherism–played a role in the formation of the Mary Chain and influenced the music too.

That was something I was interested in as well. In talking with them, a lot of them mentioned it independently of one another. I remember reading this piece how at Margaret Thatcher’s funeral, people in Yorkshire and in Scotland had no sympathy. You can’t even mention it in certain places and that was 30 plus years ago. But it makes sense: people lost their jobs [and] she crushed trade unions in this attempt to bolster the economy. In terms of where they grew up, I’ve always thought that place has so much to do with what you create, whether it’s sub-conscious or conscious, it affects everything that you do.

Your book also addresses how the band puts women on a pedestal in some of the songs on the album, like “Taste Like Cindy” and “Just Like Honey”–a departure from the usual male-domainated rock.

To me, the first line of this album [from “Just Like Honey”]: “Listen to the girl as she takes on half the world“–that to me always stood out as being super striking. In traditional pop music, that’s not a standard to put women at the forefront, women are always a little bit in the background in that sense, that to me really drove a lot of their music and maybe that’s my understanding of it. That reverence was always kind of key to me in interpreting their work. I never thought about them being misogynistic. And I think also, they’re very shy. When they made this album, some of them were teenagers…that’s just me extrapolating a little bit.

Something that I also didn’t know until reading the book is how the Mary Chain–who were known for their chaotic and confrontational early shows–subverted the traditional perception of masculinity, such as male audience members dancing together in the mosh pit.

Watching videos of their early shows at the North London Polytechnic that kind of descended into chaos, and other ones where people were moshing and having a good time and doing that–I’ve always thought of that as intriguing expression. The punk shows I’ve been to where I needed to blow off a little steam, you get into that mosh pit and you dance a little bit and you feel expunged of whatever was affecting you. And in terms of their shows and the masculinity element of it, I don’t think that was necessarily conscious. They were doing what they were doing, but that’s something Karen Parker who did the vocals in “Just Like Honey,” she got me thinking about that in terms of their wild shows. It was the highest kind of catharsis in that way. When [Bobby Gillespie and I] talked, he was talking about meeting the Reid brothers and Douglas and just having this real love for them and feeling this cosmic connection. It was not necessarily homoerotic in anyway. I think that was something that was psychically transferred to the audience when they were performing.

Had you seen the band prior to the recent Psychocandy anniversary shows?

I saw them in Washington D.C.’s [9:30 Club] when I was in college. I didn’t bring earplugs, I don’t know why. I didn’t think about it and I had tinnitus for a few days after. But it was incredible because they played a career-spanning set–they did a few from Psychocandy, a few from Darklands, and a few from Munki. I just thought it was incredible. It was one of those defining moments where I felt like, “This is a bucket list band that I thought I would never see.” It was great. It was blistering. I’ve seen them three times since then with earplugs.

Do you have a particular favorite song from the record?

It changes. But I think the noisier ones like “In a Hole.” I think “The Living End” is super-underrated. That song makes me want to get on a bike and just go. It’s great. I would say those are probably my favorites.

What did you learn from working on this project?

That I can write a book. Writing something of that length was definitely a first time thing. I feel that I learned about how to interlace a lot of different people’s stories and have it be this linear-ish kind of narrative. Talking to Jim Reid, Bobby and Douglas was hands down the best part of this book because they were all so funny, the wisecracks that they had, they had these amazing stories. To have them share that with me, I’m felt very grateful for that. I would love to keep doing that again.

What do you hope people will take from the band and the album after reading your book?

I would like for this to be in the kind of intersection between a Mary Chain fan and someone who doesn’t really know them. I think that the biography has been done, and while it’s important for context, I think extrapolating some of the other themes from the book like the candy element and Thatcherism and the alternative scene of the time, are also really important to think about as well. If people can get something out of that in my loving tribute, that would be great. I have a friend whom I gave a copy. This was probably the highest compliment anyone would have given me: he had never heard of this band and started reading it. He told me, “It made me want to listen to the album.”