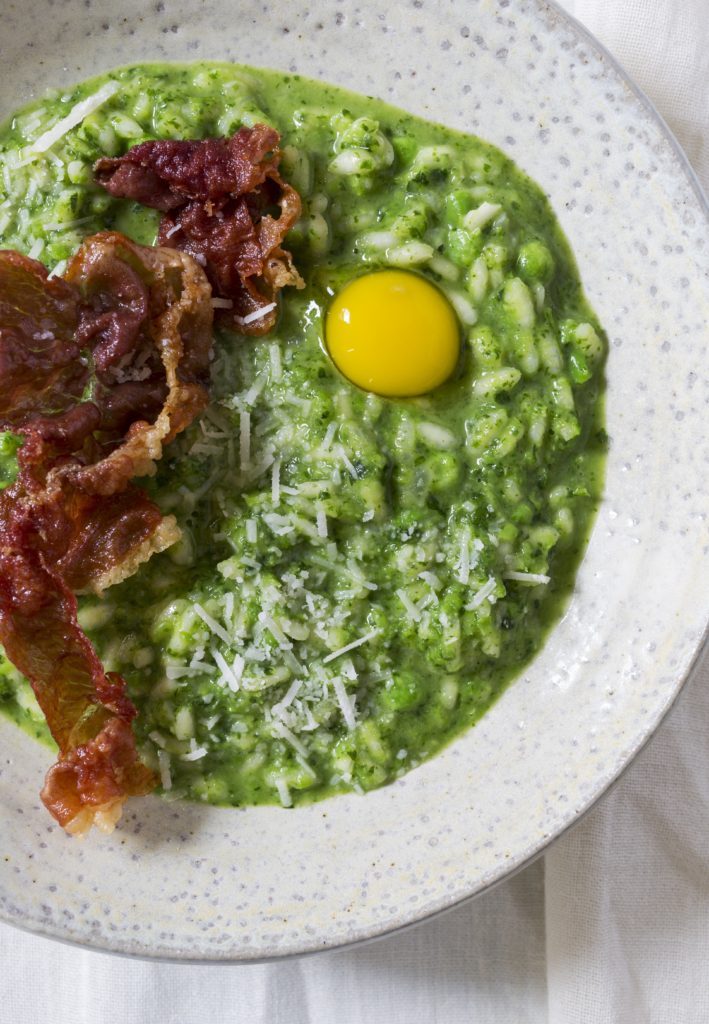 Green eggs and ham risotto is one of The Good Fork’s signature, playful dishes. Photo: ABRAMS

Sometimes, a restaurant and its location are so intertwined that one seemingly can’t exist without the other. This is the case with The Good Fork in Red Hook.

When The Good Fork opened 10 years ago getting to Red Hook was a serious undertaking. The area was a world away from the rest of Brooklyn; cut off by the Brooklyn Queens Expressway and the Hugh Carey Tunnel, then known as the Brooklyn-Battery Tunnel. Buses were infrequent, and there was no Uber, or even an IKEA shuttle or water taxi.

But the neighborhood’s unique, remote feeling appealed to some people, among them Sohui Kim and Ben Schneider, a married couple who moved to Coffey Street in the early 2000s. They opened The Good Fork because they wanted to work together (she was a chef and he was an actor and woodworker) and they wanted to entertain more people than they could in their backyard. He built the restaurant in a rowhouse on Van Brunt Street; she created the seasonally-driven, New American and Asian-influenced menu.

Within a month of opening, they had a rave review in The New York Times. The location, surely, was part of the charm.

In Peter Meehan’s review, talk of Red Hook preceded talk of the food: “What Red Hook needed was a place with an accessible menu that neighborhood folks could rely on and bridge and tunnel folks (that’s you, Manhattanites) could use as an anchor for a night out in the neighborhood. What Red Hook needed, it turns out, was the Good Fork.”

Now the restaurant is celebrating its tenth anniversary and the recent release of The Good Fork Cookbook. In a neighborhood that’s changing, it’s an anchor.

“It’s the vibe,” explained Kim on a recent gray afternoon in Red Hook, gold anchor studs in her earlobes. “Ten years in, and it’s still a mom and pop.”

Kim likes to joke that she opened two restaurants (she also owns the Korean BBQ restaurant and karaoke spot Insa in Gowanus)–one of them twice. When Hurricane Sandy wrecked havoc on New York City, Red Hook, which juts out into the harbor like a hook, was hit particularly hard. The Good Fork was severely damaged by flood water.

“When Sandy happened, for sure we were like ‘We can’t do it. This is some sign. Maybe just call it quits,’” Kim said. But they realized they couldn’t when “The Good Fork family” showed up the next day ready to help. Unlike many other businesses in the neighborhood and across the city, Kim and Schneider reopened after only about two months, a testament to their fans and their importance in the community.

“The outpouring of support, without making it sound corny, was really, really awe-inspiring to me,” Kim said. “That so many people cared. That’s when I realized it wasn’t just our little restaurant. It really belonged to the community in a sense.” 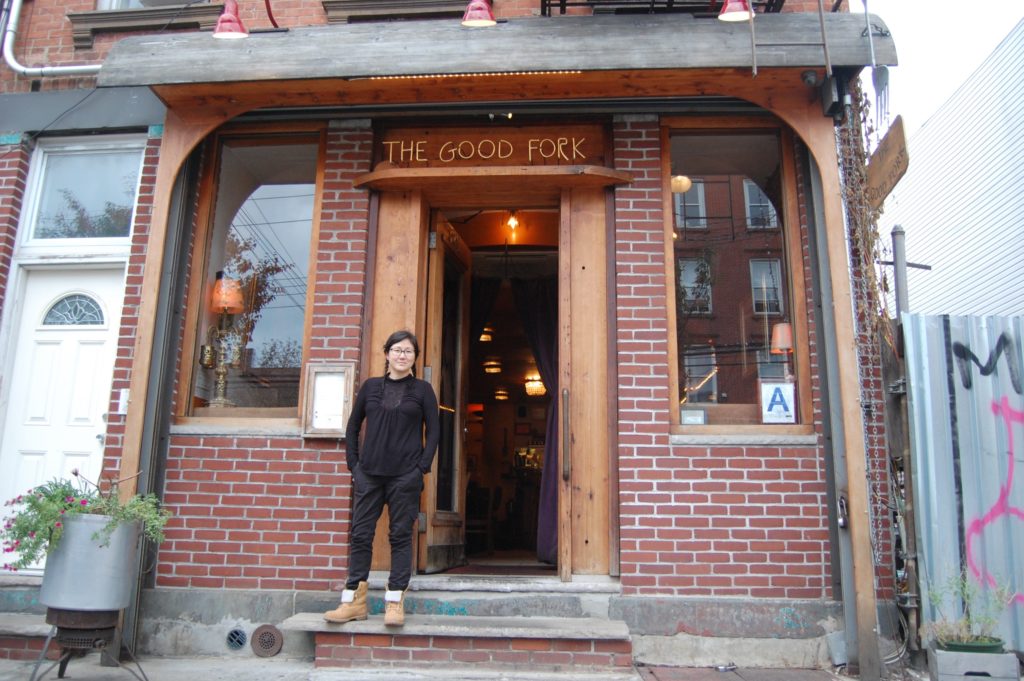 Kim worked at the highly acclaimed West Village restaurant Annisa under chef Anita Lo before opening The Good Fork. In the cookbook, she credits her experience there (“I was a sponge,” she writes.) with helping her become a skilled chef.

“I felt the creativity in me for the first time,” Kim wrote, adding, “I got my butt kicked.”

Lo said in an email that she “always knew” the enthusiasm Kim exhibited at Annisa would take her far.

“The Good Fork was really a pioneer in the Red Hook area,” Lo wrote. “Sohui was making simple, robust and delicious food in that neighborhood long before all the other players moved in. It is a quintessential neighborhood restaurant.”

The Red Hook of today is not the Red Hook of 2006. While it hasn’t gentrified at a pace quite like Williamsburg, there are many more businesses and restaurants now and real estate prices have continued to rise, even post Sandy flooding. Prices on the menu at The Good Fork in 2006 were 40% cheaper, Kim said. And yet the restaurant still fits.

“It’s a different scene. But what The Good Fork means … It holds a very special place and it’s unlike a lot of restaurants I know,” Kim said. 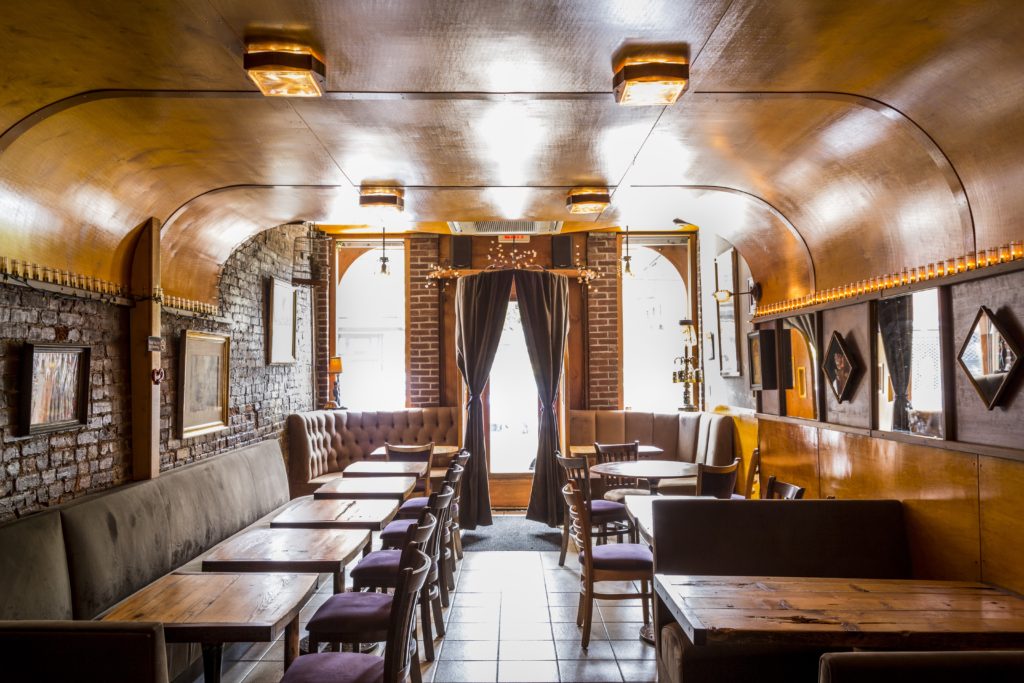 The Good Fork’s cozy interior invites you in and makes you want to stay awhile. Photo: ABRAMS

St. John Frizell, the owner of Fort Defiance, a neighboring restaurant and cocktail bar, used to rent the basement apartment of Kim and Schneider’s Red Hook house, and was an early bartender at the restaurant, agreed.

“When they first opened … it had the charm of the amateur,” he said. “It didn’t feel at all contrived or cynical or even professional. Felt like they were making it up as they want. They do a good job of retaining that slightly improvised feeling.”

While Kim says the restaurant isn’t intrinsically linked with the neighborhood because it isn’t serving Red Hook cuisine–an undefined, but interesting menu to consider–she acknowledges the important connection.

“The story of The Good Fork wouldn’t be as interesting nor as charming if it didn’t exist in Red Hook,” she said.

“For me, it’s impossible to think about The Good Fork or Fort Defiance existing anywhere else in New York City,”he said. “Or even the world.”