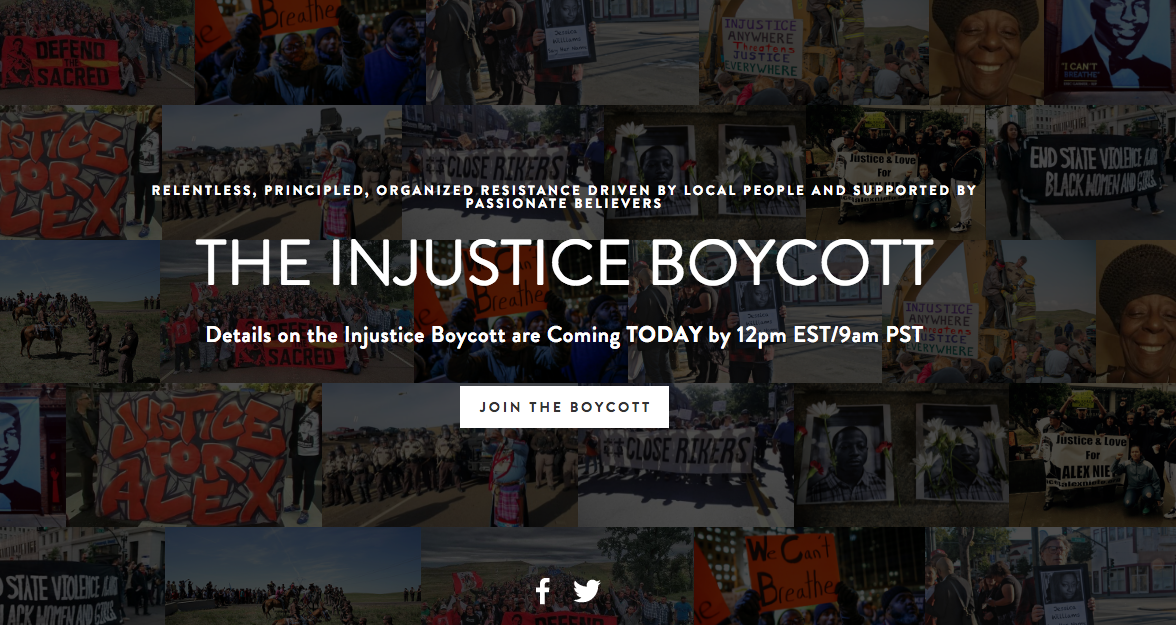 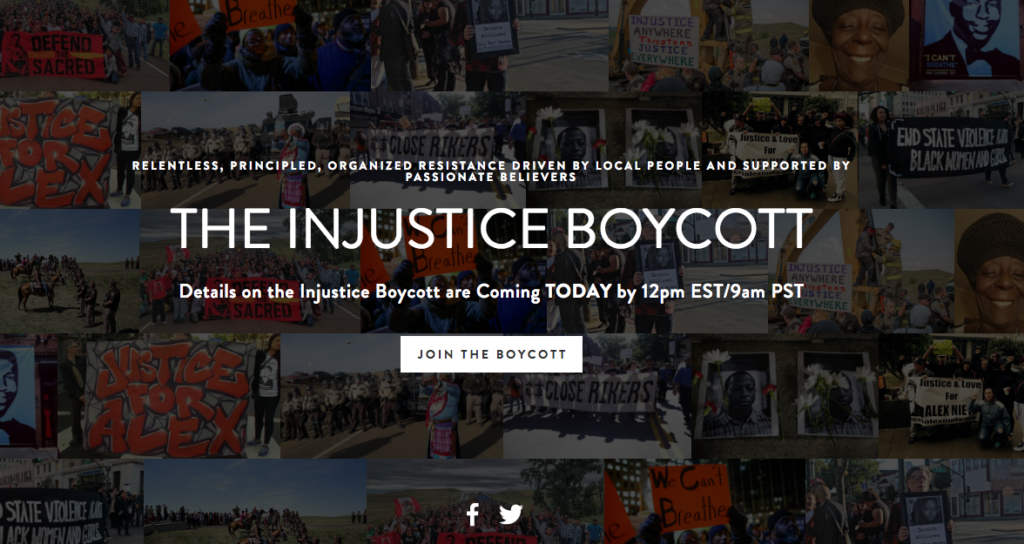 Choosing this week’s action has been difficult. Right now, between the President-elect’s financial and business conflicts of interest and his proposed cabinet full of billionaires who want to dismantle public education and health care, it feels a bit like whack-a-mole–just when you think you’ve heard the worst possible breach of political decorum or read the worst tweet yet, there’s a new and even more terrible story to read.

We will give you tools to speak out against all of the above. This week though, the most significant action you can take is to sign up for the Injustice Boycott. It launches today, and that, combined with yesterday’s news that the Army Corps of Engineers will seek alternative routes for the Dakota pipeline (although this will bear watching to make sure it’s not an empty promise) has me feeling like the people truly may have some power. Let’s keep that momentum going.

Time commitment: Your initial sign up won’t take but a second, but this is an involved and sustained political action, so be prepared to dig in.

What: Shaun King is a journalist, Black Lives Matter activist and senior justice reporter at the New York Daily News. He announced an ambitious project reporting on and actively addressing systemic injustice and police brutality against people of color called the Injustice Boycott back in September. It launches today, Dec. 5, the anniversary of the Montgomery Bus Boycott.

King and his fellow organizers have identified 10 cities in which systemic injustice persists despite supposedly progressive leaders. Starting with three cities, we will boycott targeted institutions and corporations to put pressure on Democratic leaders in those cities to make specific and achievable changes. King emphasizes that he has worked with local activists and advocacy groups to determine the agenda in each city; the boycott is designed to amplify their work and their demands, not to replace them. Once a given city makes the necessary changes, the next city on the list will take its place so three cities are always in focus.

For more details, watch this video he made on Facebook and sign up to receive instructions on how to participate–there will be action to take from everywhere, not just for residents of the targeted cities. The first three cities and additional details will be announced by noon, EST, today, Dec. 5, 2017.

Aside: Yes, a few weeks ago I said that boycotts tend not to work, but this, modeled on the transformative Montgomery Bus Boycott, which lasted for over a year, is the exception that proves the rule. By amplifying local expertise, highlighting the lack of action on the part of supposedly progressive politicians, offering a concrete way that cities can end the boycott and move social justice forward, all of these elements are incredibly powerful, and create a movement in a way that simply refusing to purchase a particular brand or at a specific retailer does not.

Action: The Injustice Boycott phase one launches today and instructions will be forthcoming via email, Facebook, Twitter, text and the website, after you sign up. Phase two begins on Martin Luther King Day, Monday, Jan. 16, 2017. This isn’t just a stand against systemic injustice and police brutality, it has the potential to redefine how local governments can be shaped by the voice of the people.

Resources: Here’s a little additional reading for the week–the more time you spend thinking and the less time you spend reacting on social media, the better.