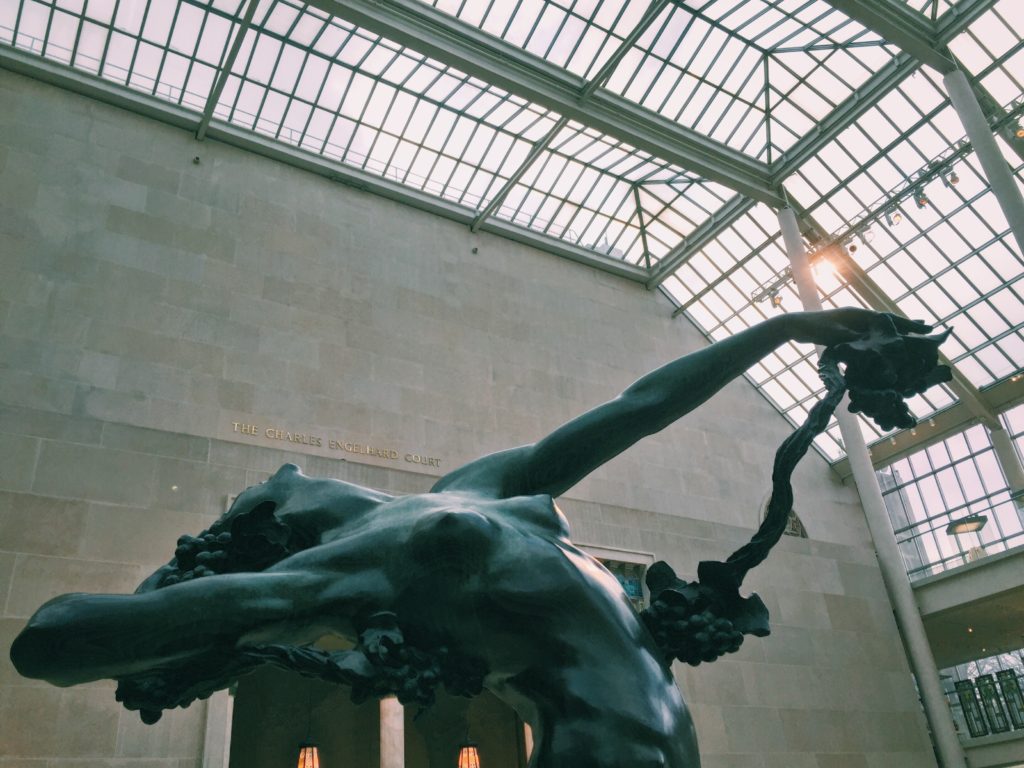 “The Vine” by Harrier Whitney Frishmuth is one of the works Museum Hack explored on a recent tour of The Metropolitan Museum of Art. Photo: Regina Mogilevskaya

Museum fatigue is most definitely a thing, according to Museum Hack founder Nick Gray. “If you’ve ever been to a museum, you’ve probably experienced walking through a gallery feeling tired and lethargic,” he says. An enormous institution like The Metropolitan Museum of Art contains hundreds of thousands of works, and no clear way to order your visit, so it’s no surprise that everyone, even the most dedicated art lover, encounters this type of exhaustion.

Museum Hack takes the overwhelming aspect out of the equation by providing focused museum experiences, which is how I found myself speedwalking down marble-tiled corridors on a chilly Saturday afternoon, on a Badass Bitches tour of The Met.

Remember those super enthusiastic, super energetic tour guides when you visited colleges? Well, they’ve grown up to be Museum Hack guides. They’re eloquent, they’re excited, and they will eagerly tell you the weirdest art-related stories you’ve ever heard. My guides were two young women named Lindsay and Lily, and for two hours they led a group of about 15 of us from the Greeks and the Romans all the way to the American Wing, conducting a tour that was part storytelling, part ice breaker, part therapy session, and hey, we even got to draw a bit. 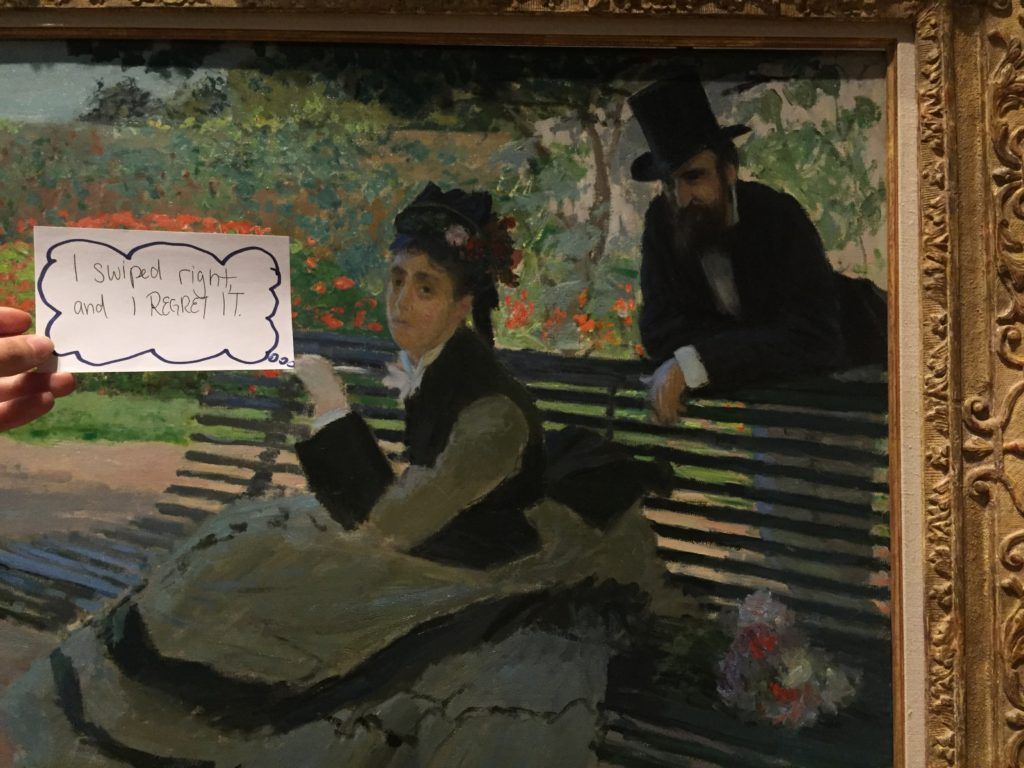 During the tour we played a little game in the European gallery called That’s What She Said. Photo: Regina Mogilevskaya

“The interviewing process to be a tour guide is rigorous,” admits Gray. “We usually have hundreds of applicants for a single position, so we’ve developed advanced techniques for identifying those that best fit our team.” In addition to traditional interviews, applicants undergo an audition that tests them on their improv and performance skills. In the final rounds, they’re tasked with leading their own mini sample tour for senior guides and a group of friends, visiting three pieces in the museum.

Once you take a Museum Hack tour, you understand the need for the intense vetting. The guides don’t just point you in the direction of works you might have otherwise breezed past, they make sure you leave the museum with stories that stick. Anyone could recite the tale of Camille Claudel, a French sculptor whose talent was on par with Rodin’s–her work greatly influenced his and their tumultuous affair essentially ruined her life and her career–but not everyone can tell it in such a way that the story is still at the forefront of your brain a week later.

Not only are Museum Hack guides enticing storytellers, but the wealth of information they store is sort of incredible. Combining a shared pool of stories as well as research using museum archives and and other resources, each guide acquires a massive repertoire of stories.

In the European wing, Lily and Lindsay stopped us in front of an enormous canvas by Rosa Bonheur. She was one of the first openly gay women in France and went on to exhibit at the Paris Salon. Bonheur was the first woman to ever be awarded a Grand Cross of the Legion of Honor, and painted herself smack dab in the middle of her most famous work, The Horse Fair. Considering this was all happening in the mid 1800’s, when it was unheard of women to be career artists, Bonheur was a badass bitch indeed. Oh, and she also wore trousers–with special permission from the French government. 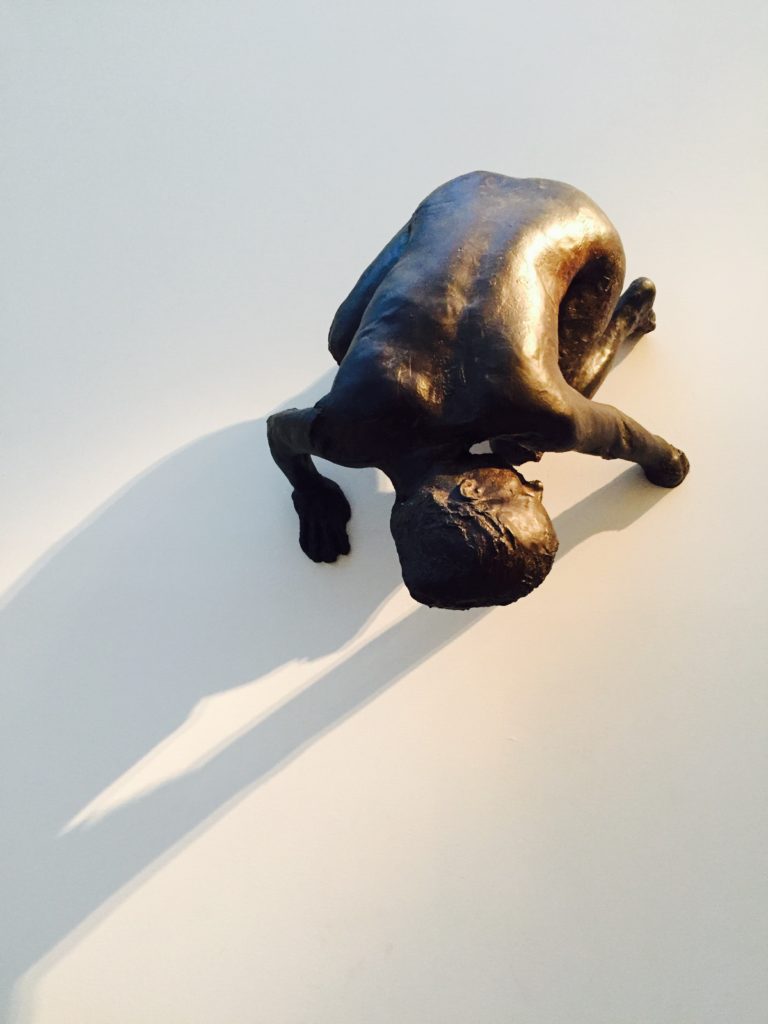 Lilith by Kiki Smith, is a sculpture that moves around the museum every few months at the artist’s request. Photo: Regina Mogilevskaya

While both female artists and the stories behind artworks depicting women were the focus of the Badass Bitches tour, Museum Hack tours can touch upon anything from hidden nooks of The Met, to backstories about brilliant paintings, to pointing out museum quirks, like Lilith, a sculpture by Kiki Smith that moves from spot to spot every few months, at Smith’s request. (In Jewish mythology, Lilith was Adam’s first wife, who refuses to be subservient, leaves Eden and becomes a sort of roaming, demonic figure, coupling with archangels and the like.)

While Badass Bitches had a distinct feminist theme, other tours, including those at the Museum of Natural History, are wider ranging in nature, leading the group through a series of fascinating stories that change from day to day.

Gray was inspired to begin these tours after a friend gave him a personal tour of The Met–they only stopped to look at artworks that she was moved by, or had interesting stories to share about. It completely reinvigorated his view of a museum he had once regarded as a bit of a tourist trap; he realized that it is possible to divide up an overwhelming institution into a sort of scavenger hunt filled with games and stories and memorable information. So if you’ve ever experienced stepping into the Great Hall and having no clue which direction to take, not only are these two-hour renegade tours ready to lead the way, they’re also ready to lift curtains you didn’t even know were there.

In New York City, Museum Hack conducts tours at The Metropolitan Museum of Art and American Natural History Museum, and they operate in San Francisco, Washington D.C. and Chicago as well. Individual tickets for adults are $59 for most tours, and they also book events like team building excursions and bachelorette and birthday parties.