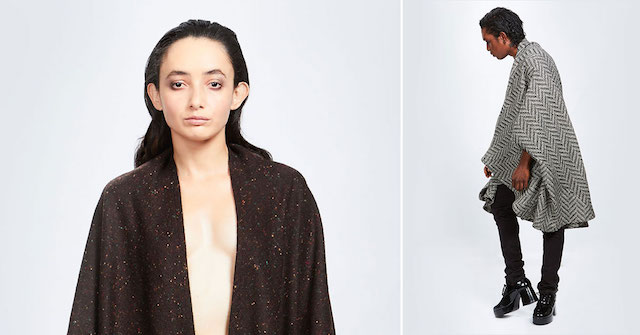 A mix between a blazer and a blanket, the Catbat cape could very well be a talisman for our uncertain times. Kat Shuford, the designer behind Catbat Shop, believes that “people of all genders and sizes should feel magical every day,” and that a gorgeous wool, mohair or cashmere cape, sustainably sourced from reclaimed and recylced fabrics, and locally made in Greenpoint, has the power to conjure a charmed existence.

Less than two years ago, Shuford, an artist and website designer came up with the idea for a line of capes, and with basic sewing skills and a DIY attitude, she cobbled together a pattern and searched out a family-run fabric business based in New York. “I didn’t know how to begin,” she says. “But it was just, sit down and do it anyway.” Her web experience allowed her to wear many hats, designing her own site and maintaining her online store. With a little luck and a lot of drive, Shuford found other people to help her along the way and came up with the prototype–one pattern that fits every body type regardless of height or gender. “I kind of did this on a self challenge,” she admits. 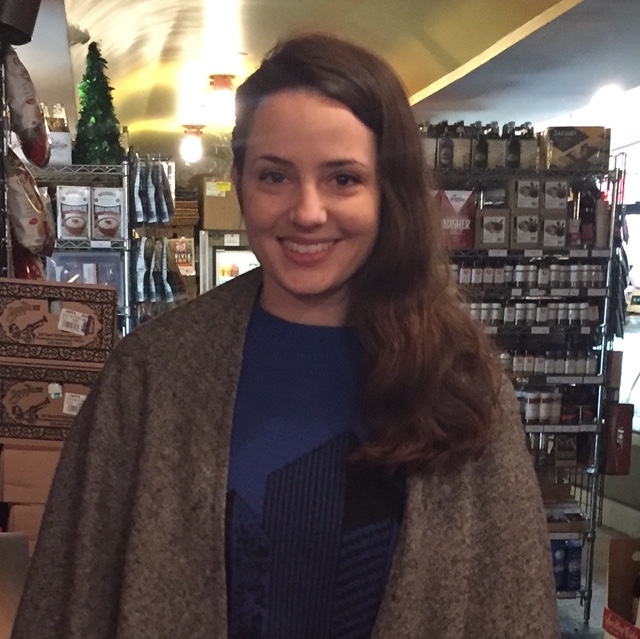 Kat Shuford, the designer of Catbat, believes that “people of all genders and sizes should feel magical every day.” Photo: Meredith Craig de Pietro

The cape has the comfort of a really big blanket, but with more structure. The most popular styles, the Bien Cape, ($190) made of donegal wool, and the Tokoi cape ($160), a wool tweed, seamlessly transition from the coworking space to the indie film festival. Catbat capes drape over the wearer effortlessly, and without a clasp that might restrict movement or limit styling options. “The challenge was how to do a clasp that wouldn’t then define how it was to be worn,” says Shuford. Unlike other capes on the market, this one is subtlly structured so that the wearer doesn’t look like an extra from a Harry Potter film. “I wanted something that was less like a costume piece,” she says. 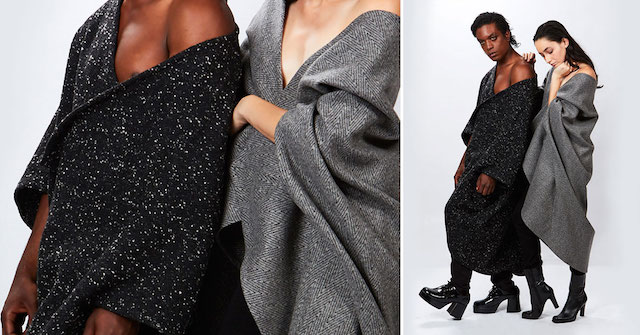 Catbat’s capes provide the magic to transform anyone (regardless of gender).

Catbat is part of the genderless clothing line movement, which as of last year also included Zara and Selfridges, as well as Brooklyn-based brands and designers. “Any of these social movements are really for all of us,” Shuford says. But where many agender lines have gotten slack for producing unflattering cuts, these capes are not about hiding the body. “I like to still retain a bit of softness and what could be called femininity and bring that into the genderless piece,” she says. “The cape can flow over the body, letting it be as it is, instead of trying to reshape it.”

The work that Shuford put into the pattern has paid off, with customers of all ages and genders buying up the stock. “I designed this with any gender in mind, purposefully trying to walk this boundary, but then to actually see guys ordering them is super exciting,” she says. 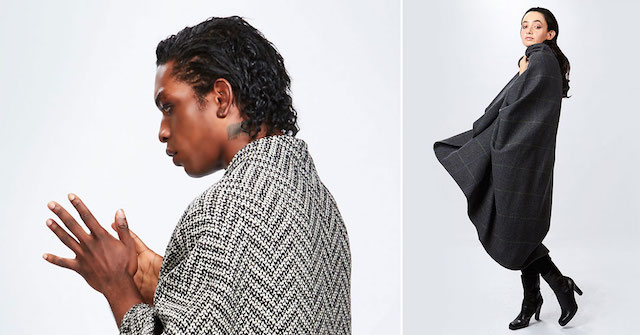 Shuford’s ideal customer is anyone who dresses for themselves and not for other people. “The joy and excitement in fashion comes with how clothing makes you feel. Even if other people look at you and think nothing special, there’s something that happened when you put on that piece that made you feel different.” Catbat is all about the magic of transformation, the alchemy of seeing a hopeful future that starts with yourself–no magic wand required.

The origin of the name: “I had this idea of the Cat Bat as this mythical creature that was a constellation that we no longer know about. I was originally drawing this illustration of it that was based off this set of star cards that are like tarot cards. I liked the mystical magic element.”

Biggest inspiration: “The poet Eileen Myles. I saw her at BAM talking about her work. She is just fearless in the places she’ll go with her poetry and doesn’t let herself get boxed in with what a poet should or shouldn’t do. And she just is a good hearted human. This is definitely not an exact quote but she said, “Bring your art wherever you go.” And I try to do that instead of making your own space for art, that whatever Im doing, I bring the art there.”

Story behind the names of the capes: “Each cape is named after a witch or group of witches that died or was executed for being a witch. [Before researching] I didn’t really realize that women’s sexuality and reproduction and midwives were targeted during the witch trials. I thought everything going on now with reproductive rights was something new, but it’s as old as time.”

Alma mater: “I actually have a studio art background in sculpture at Wake Forest.”

Each cape is a limited edition: Since all of the capes are made from deadstock fabrics, they cannot be reordered. “Once they’re sold out, they’re out.”