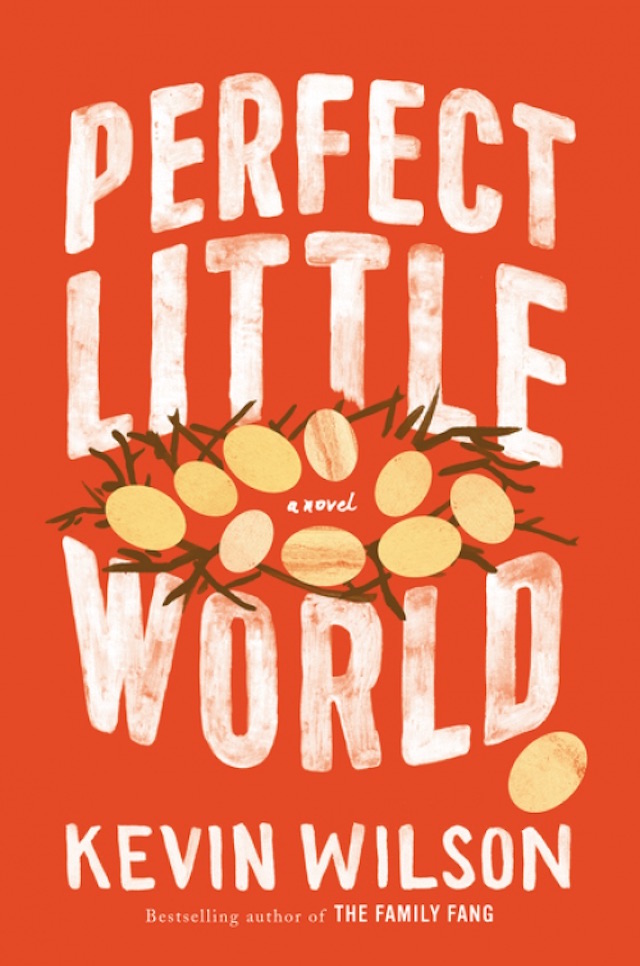 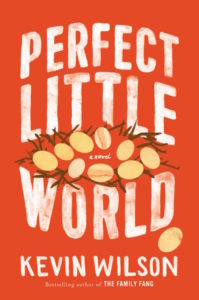 As I sit here writing this, my son is home with strep throat. I haven’t left the house in two days, and I’m inundated with having to care for, entertain and feed my little one, while also meeting work deadlines. What I wouldn’t give for another set of hands? Or how about 20 extra sets of hands?

This is the premise of Kevin Wilson’s new novel, Perfect Little World, the story of an utopian experiment that promises its participants a return on the “it takes a village” philosophy. This is not Wilson’s first foray into unusually structured kinship groups–his 2011 novel The Family Fang, which became a movie starring Nicole Kidman and Jason Bateman, chronicled two adult children visiting the eccentric parents who had turned their childhood into performance art.

Perfect Little World stars, Izzy Poole, a pregnant teenager who is offered a spot in The Infinite Family Project, an experiment of child and family development. Her newborn son will join nine other babies of the same age to live for 10 years in the ultimate environment. All their needs will be attended to, housing, food, and clothing will all be provided. The children are promised the best of everything: educational toys, healthy meals and enriching environments. The adults won’t be forgotten either. Scholarships for college or job training will be granted, and any hobby or interest will be funded. All expenses to be taken care of by an elderly eccentric billionaire who has a vested interest in studying and redefining the family.

For Izzy, her prospects outside joining the experiment are dismal: an alcoholic father, a job at a BBQ joint, and a lack of money. She knows in her heart that she can be a good parent, but without the resources, she doesn’t see how it will be possible. Like most parents, Izzy is afraid of the mistakes she could make as a new mother. “She felt like it would take thousands of pages of official paperwork to ever deserve Cap, but some miracle had simply given him to her, no questions asked. She hoped she could keep him, whatever came next,” Wilson writes. When she meets Dr. Grind, the kind child psychologist behind the project, she sees her chance to share the burden of parenthood with others.

Dr. Grind is easily the most complicated of the bunch. He is the son of two famous child psychologists who raised him under the “Constant Friction Method,” wherein he was subjected to constant unexpected stress to see how he would react. Later in life he is engulfed in a family tragedy, discovering that “there were no measures that truly protected against disaster; you simply held onto what mattered and hoped that you found your way to the other side.” And the other side of his life includes PTSD, a rigid bottling of emotions, and the inspiration to create his own idealized family.

Although Dr. Grind’s project starts off well, with the children thriving, and the parents united, there are soon cracks in the glossy veneer. The psychological study involves different personalities, and the controlled environment spins wildly as the years progress. Unlike Emma Cline’s The Girls or Dave Egger’s The Circle, Wilson isn’t writing about a cult; there’s no dread haunting the pages. Nothing sinister lies behind The Infinite Family Project, and that the study is based entirely on hope makes it even more tragic when it all begins to unravel over the 10-year span. The emotional entanglements, the escalating arguments, and the need for individualization may not be part of their shared utopian vision, but what they all find ultimately, is family, in all its imperfect glory.