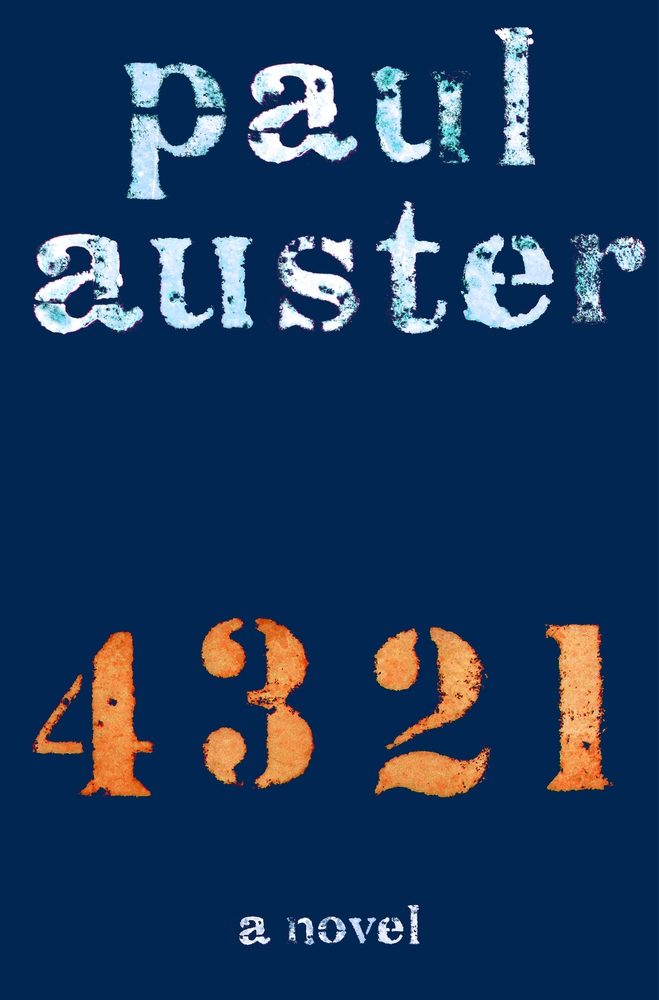 I should be upfront and tell you that I was predisposed to fall in love with Paul Auster’s hefty new novel, 4 3 2 1.

Sitting on my desk when the 860-page review copy arrived in the mail was a stack of books that included Thoreau’s Walden and Civil Disobedience and Candide, both of which have recently seemed worth a revisit to me, and both of which figure prominently in the novel. Twice in the past I’ve interviewed Auster, who is a kind and engaging sort of writer, rather than a prickly and defensive one, despite his intense, sort of smoldering author’s photos and the intractability for which his work is known. 4 3 2 1 is a love song to New York, which is really the strongest character in the book, other than our quadruplicate protagonist, Archie Ferguson. I recently moved from New York after nearly 15 years, to Brattleboro, a small town in Vermont, which, oddly, also has a cameo in the weighty tome.

Those were my circumstances, which you should understand before you go out and get yourself involved with this book, because I fell for it hard, but for personal reasons, which I suppose is why we fall hard for anything.

All this is about me, the reader, and shouldn’t I get myself out of the way and let the text speak for itself? Remember, this is Paul Auster, a fiction writer who has long grappled with, in ways both playful and portentous, where the author ends and the character begins and how much of the content of the page is determined by the individual act of reading it. It feels fitting to insert myself, and the connections and coincidences, another Auster obsession, that contributed to  my love for this book.

The premise is goes like this: 4 3 2 1 charts the life and education of Archibald Ferguson, born March 3, 1947, in Newark, N.J., one month after Auster himself was born, in the same spot. March mirrors the calendar of February in non-leap years–if February 3, 1947 was a Monday, which it was, March 3 is also a Monday, so it’s an even deeper doubling. From that single child, four distinct narrative arcs develop and the first couple hundred pages move forward at breakneck speed as you struggle to differentiate between the hopes and dreams of four similar, but distinct small boys, and four similar but distinct New Jersey homesteads.

Auster is not gentle with us, and the novel brims with a parent’s anxiety for their child. Ferguson, as he is largely known throughout, though various nicknames and pen names emerge as all four grow older, falls out of trees, gets into car accidents, experiences loss and in fact dies, more than once.

Though, the first death will shock you, it is fair, I think, to not categorize this as a spoiler. For one, only the most sentimental of novelists would sustain four Fergusons for the duration. And, the narrative doesn’t turn on individual plot points like these, though there are certainly some moments that become crucial to each identity. It’s the sheer volume and force of American childhood lived in an era we now conflate with perfection that impresses here, a time when Ferguson’s life, and America’s too, were seemingly limitless in their potential, but in retrospect were far more vulnerable than it seemed at the time.

As the ’50s turn into the ’60s and Ferguson becomes a teenager, 4 3 2 1 begins to bog down, into both the manic tedium of adolescence and into the events of the era. There are a few reasons here to keep reading. Manhattan Archie, as I called him in my mind, could have been afforded a novel all his own, and his decampment for Paris after high school is one of the most fun and affecting sections of the novel. During this phase all of the Fergusons are voracious readers and 4 3 2 1  is swimming in references to books and movies, and there’s something about that broad education, and reminder of the collected works of humanity, that is so pleasurable and intellectually luxuriant.

The trip through the tumult of the ’60s in these pages feels strangely prescient, more connected to the present than usual. If the events of November 2016 had been different, I’m not sure how that might have affected my January 2017 reading of this book, but it is a powerful reminder that the narrative of America’s deep divisions is not new, and those divisions, in fact, are less fraught with violence now than they were half a century ago. This came as a jolt of hope in a confusing time, and fiction can be a powerful lens into history inthe right hands. Kate Atkinson’s marvelous book, Life After Life, wades through Britain from the turn of the 20th century on, grappling with the World Wars by means of a protagonist who dies over and over, coming back to life each time and starting all over, living only when her actions or her circumstances change. That novel is an investigation into how the modern Britain came to be. 4 3 2 1 feels more like an argument that life itself is a collection of oddly overlapping, yet parallel narratives that combine to form a larger truth.

Listen, 900-pages of the inside of one somewhat solipsistic young baby boomer’s head isn’t for everyone, but that’s a purposefully harsh reduction of the novel to highlight the narrative magic that 4 3 2 1 manages to pull off.

Auster fans will find in this a sort of unifying theory of New York, I think–a Yoknapatawpha-esque set of places, themes and characters from previous works. There was a moment, about halfway in to my time in New York where I walked by a storefront and realized that I could remember three different businesses that had been there and that there was an old sign, probably from Ferguson’s era, visible on the building as well. Thanks to my English degree the world palimpsest floated to the front of my brain and I realized that more than anything, that’s what New York is–layers and layers, some still visible, some peeking out from behind their successors of people and places and things that comes to a gorgeous and miraculous coherence if you look at it from the right distance. That is exactly what 4 3 2 1 is too.