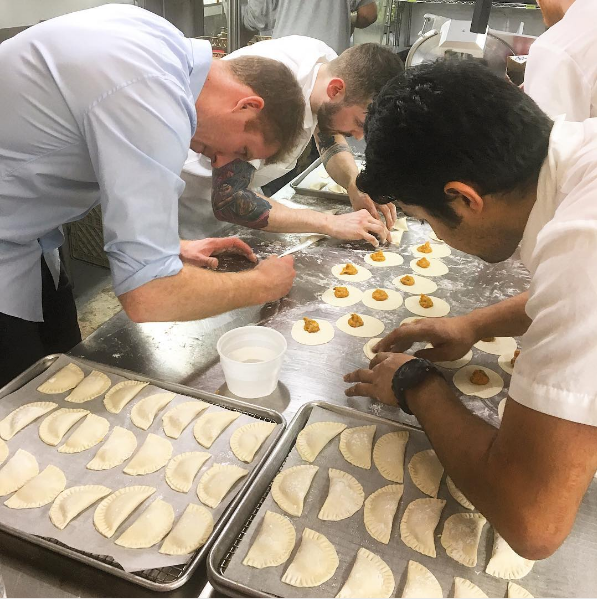 I know it’s supposed to be 60 degrees on Wednesday, practically outdoor movie weather, but it’s only the beginning of February folks, we’ve got lots more winter to make it through. How do we get the chill out of our bones (and hearts)? Eat. And do it with friends and loved ones.

Here are seven of the the hottest dishes in Brooklyn–served piping hot, swimming in spice or just imbued with that magic so-hot-right-now-sauce. They’ll lift your spirits, stop your nose from running and maybe get your eyes and mouth watering at once.

Making sweet potato and uni pierogies at Olmsted is a labor of love. Photo: @olmstednyc

Chef Greg Baxtrom and crew keep hitting the nail on the head with their stylized version of American classics at Olmsted. First came the crab rangoon, which were made with kale, served in a take-out Chinese style box and now the acclaimed Prospect Heights restaurant is making their version of pierogi, filled with the “it” ingredient that just won’t stop: sea urchin. These babies are another fine example of what can happen when high meets home-y. 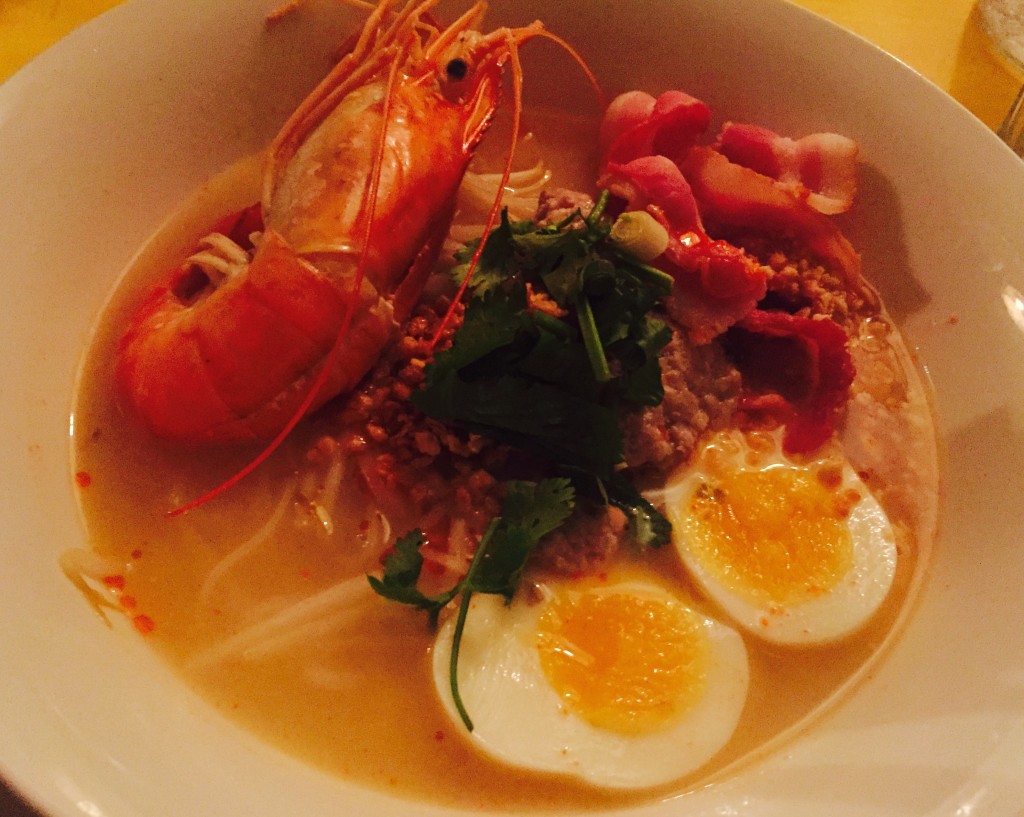 When LOOK by Plant Love House moved from Elmhurst to Prospect Heights the neighborhood, as well as all the food blogs, buzzed with anticipation. What this Thai restaurant has been cranking out is inspired cooking very unlike the Thai food most people are familiar with. Yes, there’s pad thai but it’s served “old-school” style with more shrimp and chive flavors. There is also tom yum soup, which you’ve likely seen of and had before, but at LOOK the flavor profile is raised by assertive fish sauce and loads of lime. It comes loaded with noodles, ground pork, pork fish balls, peanuts and even crispy wontons. And it’s spicy. Heed this warning. Or be challenged! Or, go luxe and try the epic num prik phow tom yum goong yai, which also packs some spice and comes with a head-on shrimp and bacon. Either way,  you can’t really lose. 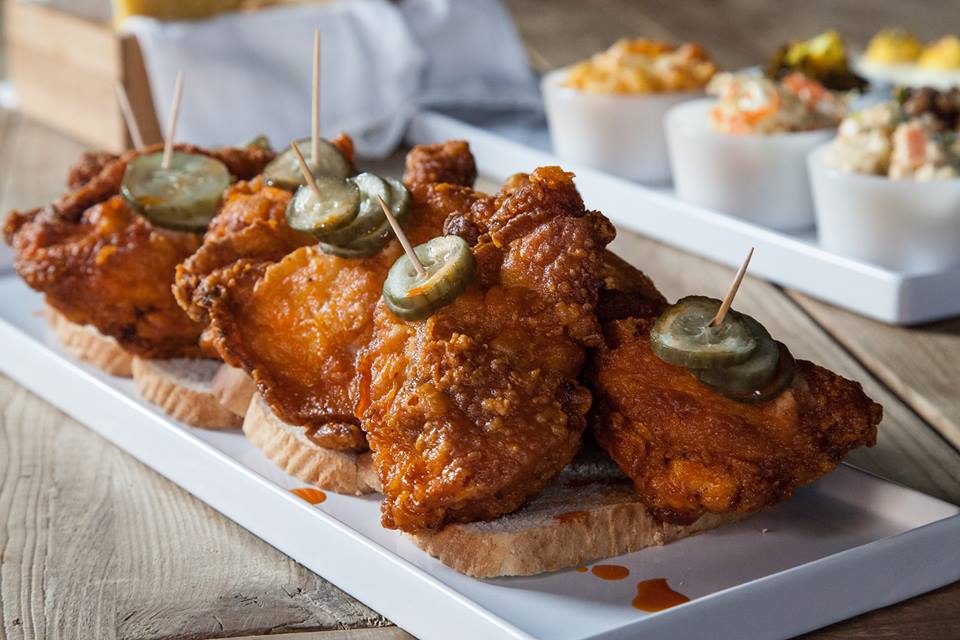 If you’re crazy like me, you’ll order your chicken at a “Boomshakala” level of spice at Carla Hall’s chicken place down on Columbia Street. That’s level 6 of a scale of 1-6. When I had this chicken -which is marvelously crunchy–the insides of my ears burned. It was painful, I admit. But I liked it. 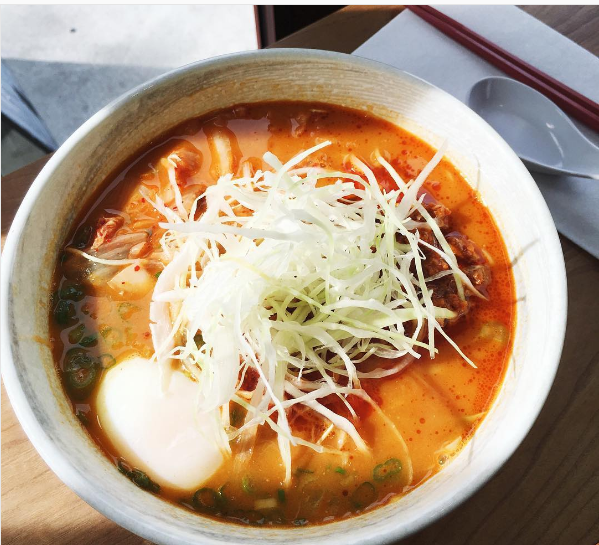 The Kimchi ramen at Chuko is the kick of warmth you may need right now. Photo: @chukobk via Instagram

Chuko serves up some of the best, if not the best, ramen in Brooklyn and the bowl that is consistently a winner for both myself and many other ramen freaks I know is the restaurant’s very creative kimchi ramen. The broth is rich and funky thanks to the kimchi and the addition of spicy ground pork gives the bowl the kick you need. Pow! 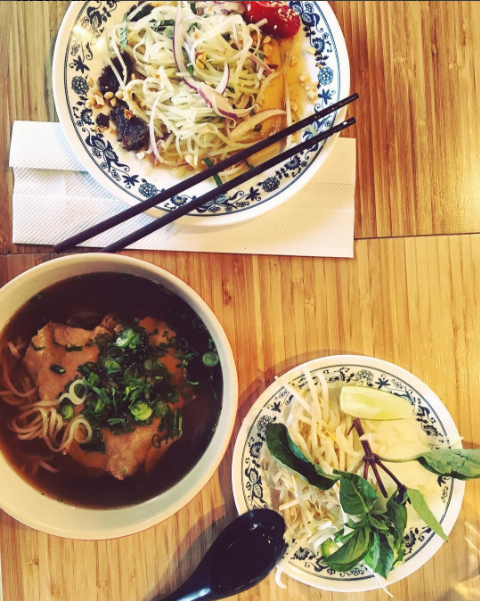 Add as much spice to your pho as it takes at BunKer. Photo: @tuckerschwarz via Instagram

Beloved Vietnamese restaurant BunKer reopened in a new location last month–just in time for the dead of winter. So hightail it to Bushwick because you need the beef noodle pho in your life right about now. The protein is grass-fed and the addition of brisket ups the deep, fatty notes of beef. The soup also features jalapeño, so this one’s a double punch of warmth and spicy heat, plus whatever additional hot condiments you add to the mix. 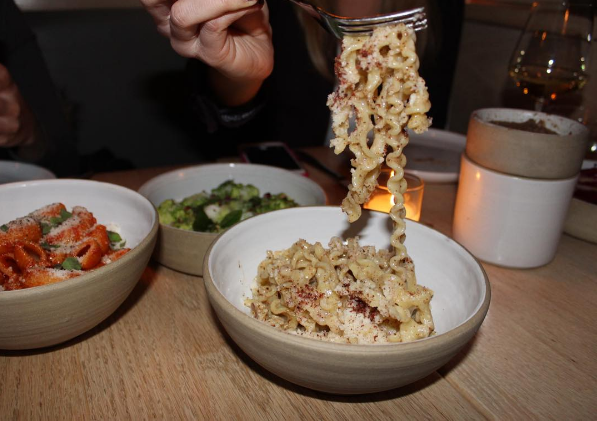 The mafaldini at Lilia is even more fun to eat than it is to Instagram. Photo: @samanthaullrich via Instagram

Lilia has received endless accolades since opening last spring, and Missy Robbins’ wood-fired Williamsburg restaurant landed on basically ALL the best of 2016 year-end lists (including ours). What’s interesting is that the menu has basically remained the same since the restaurant opened, and despite that the dishes are still all the rage on Instagram. Talk about buzzy. One in particular that any New York City foodie will recognize is the mafaldini with pink peppercorns and parmigiano reggiano. Just check Instagram. Notice how almost all the pics feature a hand holding a fork pulling the pasta up out of the bowl? Those ribbed ribbons are a thing of beauty. 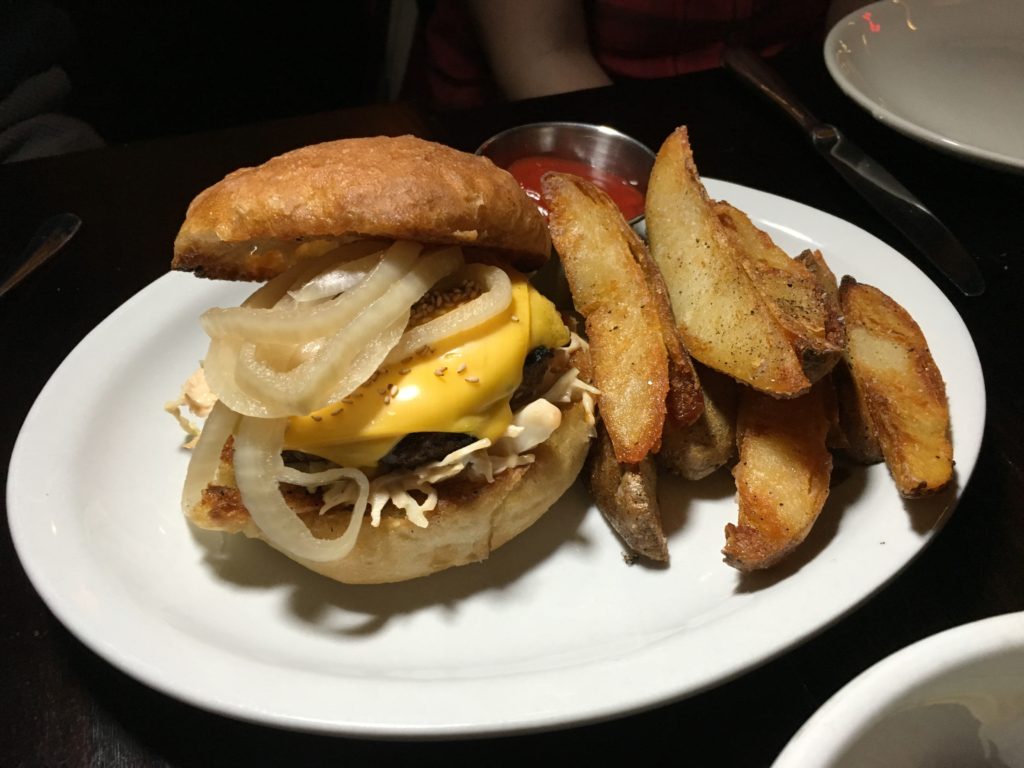 Veggie burger fever will have to take a pause for the burger at Rider and the steak fries it comes with. Photo: Georgia Kral

This two-story restaurant is incorporated into the same structure that houses the new music venue National Sawdust on North 6th Street in Williamsburg. That area looks very foreign to some of us, and Rider’s vibe is very much the Williamsburg of 2017. But sometimes backstory takes a backseat, and that is very much the case when it comes to the cheeseburger there. People are talking about this burger because it’s just creative enough. Served with American cheese (there’s really no other way), thinly-sliced cabbage coated in Russian dressing, pickled onions and sesame seeds ON THE CHEESE instead of the bun, it’s all the flavors you want, only better than you thought possible. (Also, those steak fries are crispy as hell.)