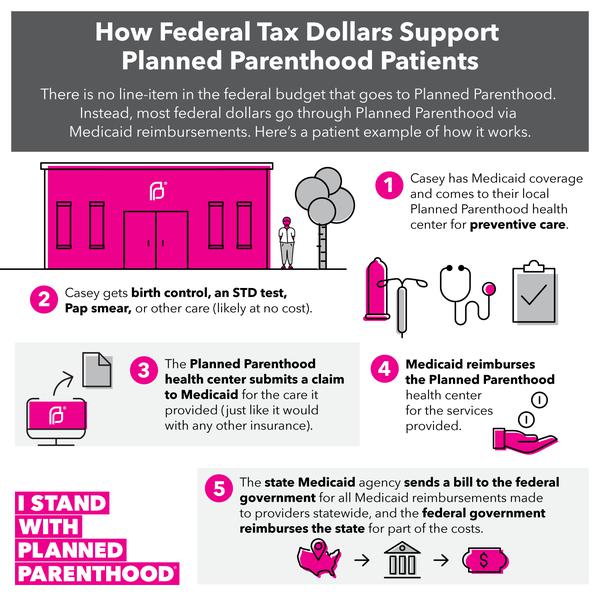 I’ve decided to start going to Planned Parenthood again. I moved recently and I haven’t found a gynecologist to call my own yet, and while reading about the anti-choice rallies urging the government to “defund” PP last week I realized that I could support it with my body, as a patient. This feels right in so many ways.

I owe my life to Planned Parenthood. Not in the medical sense, but the quality of my life today was made possible by having access to birth control I could afford when I was younger. For many years I didn’t have health insurance and having Planned Parenthood as a resource meant that I knew I could at least get a Pap smear and a basic check-up. As a human female who has spent the past few decades having sex with a variety of human males, there’s just no way that without birth control I could have gone to college, worked approximately 46 different jobs in my twenties, lived in different cities, gone to graduate school, started a business and all the other great stuff I chose to do, footloose and fancy free-like, before I finally had my son at age 38. I recognize what a privilege this is and I also recognize that I’m a way better mom than I would have been at 20, 25, 30 or even 35. Everybody wins, especially me.

The Planned Parenthood in Downtown Brooklyn is very large and very efficient. The waiting room has a distinct resemblance to the DMV. Between the waiting room and your exam you linger in a sort of medical purgatory where you pee in a cup and carry it past a dozen other women doing the same thing in a bathroom with all the charm of a high school locker room. But then you get to your appointment and you are treated like a real live human person worthy of care.

I can’t tell you how rare and important this is, and I probably don’t have to.

Years ago I had, for a brief moment, pretty good insurance. During that time I had a problematic Pap smear and needed another test called a colposcopy. For that I went to a fancy practice on Prospect Park West. The magazines in the waiting room were current. It was tastefully decorated. No one warned me that this would be painful or scary or that I would need to recover from it (samples of cervical tissue are removed for testing, read: they snip bits of flesh from your body, no pain meds, not even a valium, and it’s as awesome as that sounds). The doctor didn’t look me in the eye or really talk to me, even when I started to cry. He walked out of the room while I was in mid-sentence, asking him a question that I later had to google for an answer. A Russian nurse brought me a tissue, told me I should take a car service home, and then made it clear that me that they needed the room.

For my next annual exam I went to Planned Parenthood, through the gauntlet of waiting rooms and onto an examining table where an extremely kind young gynecologist listened sympathetically, then angrily, while I recounted my colposcopy horror story. She answered all my questions, spent as much time as it took and made me feel like a person, not an inconvenience.

Almost every woman I know has either had an abortion, had a miscarriage, or been the victim of some kind of sexual violence. I didn’t plan on having that terrible colposcopy and being treated like garbage by a doctor who should have done better. No one plans on having an abortion. No one plans being raped. Planned Parenthood acknowledges that these events happen in women’s lives. They don’t try to hope away gonorrhea or pray on sexual assault. They are there with comfort, care and counseling for every woman, no matter how much she can pay, addressing the particular challenges of walking through the world with a female body with kindness and competence.

The idea of “defunding” Planned Parenthood makes me furious for three reasons. One, we absolutely need a place that does what I just described. To not acknowledge that negates the reality of life in a female body. It also keeps the idea alive that we should simply refrain from having sex if we want to avoid all these troubles. Planned Parenthood is one of the few places where wanting to have sex is something you don’t have to apologize for, where it’s just normal and human.

Two, there is no line item on any federal budget that goes directly to Planned Parenthood. Like every other provider, they treat patients and are then reimbursed for that treatment by the patient’s insurer–the government in the case of Medicaid patients. If you want to defund PP, well, then you should also be picketing outside every public hospital that performs abortions, because they’re likely getting much MORE government support than Planned Parenthood, in the form of grants and other programs. Federal money doesn’t go to abortions, PP uses private donor funds to subsidize abortions, so what you’d really be defunding is primary care.

And three, Planned Parenthood is incredibly efficient and well organized. They provide quality to care to a wide variety of people at an affordable price. As a place that works on a sliding scale for the uninsured and takes Medicaid, which few private practices do, they’re making primary care work for a pool of patients that most providers wouldn’t–and don’t–accept. The government should be looking to Planned Parenthood for how to improve access to basic preventative care, if, as we’ve been led to believe in the interminable debate over the Affordable Care Act, what they want to do is lower costs. Yes, PP has private donors, and their menu of services is more narrow than a primary care clinic would be, but they’re doing a lot right, and could be a powerful model to learn from.

Thank you, Planned Parenthood. Thank you for the life I got to lead by waiting until I was good and ready to have a child. I originally came to you with sex on my mind, but now I’m back for the empowerment you’ve been serving me with all these years.

Monday: Support Planned Parenthood in some way today. Donate, decide to become a patient there again, volunteer to become a clinic escort. If you go to a private practice, call and ask whether they accept Medicaid, and if they say no, ask if there’s something they would need to do so that you could communicate to your elected officials. Email me your thank you to Planned Parenthood so I can compile them in a post.

Tuesday: Brush up on effective tactics for communicating with your representatives. The cabinet confirmation process has been, well it has fucking sucked. There are a lot of teachers in my life and all of them are devastated by DeVos. In the frantic scramble to get another Republican to stand against a clearly unfit candidate I definitely went off message last week, imploring everyone to turn to social media. If you haven’t yet, think about finding a local Indivisible group–mine was supposed to meet for the first time last week but a foot of snow postponed the meeting until the end of the month. I’ll report back.

Wednesday: What are you doing for Not My President’s Day weekend? Are you marching somewhere? Divesting from a DAPL-backing bank? Planning a meeting with your representatives while they are on recess? Make a solid plan to do something next week that makes you feel a sense of progress.

Thursday: Think about updating your personal security on all your devices. I’m not going to go down the paranoia rabbithole here, but I will tell you that this is a very good idea.

Friday: Read this story about how 25 states are now entirely G.O.P.-controlled and really start thinking about how you’re going to dig in on an issue you care about over the next two years. There’s been a lot of excitement and head-to-head battles over the past few weeks, but the real work is just beginning. Read this excellent story about how local change happens, even with school lunches in the un-healthiest town in the country. It’s a little breath of inspiration and a reminder about how local most change really is.

Saturday: Do something nice for yourself and someone you’re fond of and make something delicious. This lovely article about Bengali comfort food was strangely calming, and made me crave a dish I’ve never tried.

Sunday: Write a thank you note to a politician who has stood up for something important over the past few weeks. Encouragement is important.