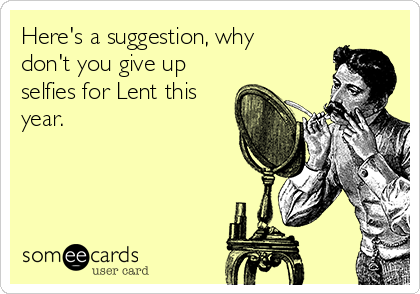 Lent starts tomorrow. I’m not asking you to go to church or subscribe to any particular religious beliefs, or any beliefs at all. Just as the bunnies and eggs of Easter map onto pagan spring fertility rites, we can take other traditions, rituals and celebrations and find inspiration in them.

Lent is traditionally a time spent reflecting on the life and work of Jesus Christ, who, from a certain perspective, was one of the original grassroots organizers. He definitely did not care for the financial services industry. This year it seems fitting to spend it thinking deeply about how our own daily actions fit into our larger communities, into the larger world.

What do I mean?

Many of us exist in this place where we buy our way out of moral dilemmas. This philosophy, which has been a powerful agent of change in the food world, really works best when you’re talking about essentials. We have to eat, so buying food that creates positive change for the environment, for workers, for the larger agricultural economy, is the right thing to do if you can afford it. When it comes to non-essentials, like 90% of the clothing we wear, like conveniences and indulgences, it’s a little less clear. Even if you buy green, organic cotton t-shirts made locally the real question isn’t whether the t-shirt is better than the fast fashion version. The question is, did you really need that t-shirt? What does it mean to be in a position of power where you are able to make that choice? Is this the set of choices that you would like to define your life?

Now, I’m not saying luxuries are bad. I just bought a new dress I didn’t need for a wedding. I love watching procedural dramas, even terrible ones that are basically an advertisement for a police state. I’m thinking about getting up to eat a Thin Mint right now. The Girl Scouts illustrate this perfectly, those cookies are a luxury masquerading as a good deed, right?

In my experience, living in a city, looking for convenience and ways to treat myself as a reward for the work it takes to live in a city (yes, that’s tautological loop), there are two dominant types luxury to think about here: the $20 mani-pedi and the $200 t-shirt; the $4 coffee and the $200 farm-to-table dinner. Amazon Prime might embody both of these and a whole slew of other modern problems as well.

The mani-pedi, at least in New York City, is the perfect example of an affordable luxury that many of us have indulged in, myself included, without really examining what we were participating in. Instead of wondering how the service could be so cheap, we let ourselves believe that those small, mostly Asian women, literally kneeling in front of us and trimming our toenails were being treated at least okay. It turns out that for the most part, no, they are not being treated okay, or really even like humans at all. Cheap things, whether you’re talking about junk food or dresses sewn by children, are rarely actually cheap.

The $200 eco t-shirt has a different set of problems. I’m all for buying nice things and supporting small businesses and if all cotton was grown organically the health of our planet, and textile workers, would improve considerably. But there’s another way to look at this purchase, too. We all have too many things. Even if they spark joy. You are an economic actor and that $200 you spent could have gone elsewhere, to a charity, to making your shopping list even more local and sustainable, to your savings account so that you can work toward quitting your job in a lucrative industry you hate so you can work at something lower-paying that you love. You get the idea.

Buying our way out of moral dilemmas can be a good thing–think back to food, and hey, we do need to wear clothing. But when that becomes our only tool, voting with our dollars, it’s limiting; it reinforces the idea that the most important thing about us is our consumer choices, our money and how we use it.  We are not just the sum of our bank accounts and all the convenience apps on our smartphones; we’re interconnected human beings and we put up a lot of filters between ourselves and others these days in the name of convenience. This Lent challenge is designed to help us reconnect to a sense of shared purpose and intellectual engagement–that we have more important aspects of ourselves to develop and enrich the world with than our sense of personal style.

For Lent, let’s each chose something like the $20 mani-pedi problem–a small luxury that upon deeper reflection makes the world a less kind, just, interesting or vital place when we partake in it, and quit that activity. Other things that you could argue belong here include social media, reality television, fast fashion and almost anything you can do from your phone. Many Catholic grandmas I know used to give up chocolate for Lent. Google “chocolate and slavery” and that choice suddenly has more weight. I vowed never to buy anything again after moving last fall and then fell victim to post-holiday sales. No more shopping until after Lent.

For $200 t-shirt problem, just identify one way that you’re buying your way out of a moral dilemma and really examine it. Yes, those gorgeous sandals are made from local leather by artisans paid a living wage. But, do you actually need them? Is there something more truly liberating you can do with that money? They’ll still be there after Easter Sunday, if you decide you need them. Or, think about the time you spend watching television. Is there something more personally gratifying you can do with that time? I’m by no means an anti-TV activist. But, I do find that reading at night makes me sleep better and makes me feel more alive than watching television, especially my guilty-pleasure cop shows. For Lent I’m going to stop with the social media (that isn’t for work). I waste at least an hour a day scrolling through Facebook and trolling Instagram that could be spent plotting a garden, reading a novel or going for a walk.

Just sit with a question of your choosing, think about what you are making room for in your life, for the six weeks of Lent. As they say in yoga, see what comes up.

Here’s what to do this week to keep defending, and even expanding a more just and peaceful world.

Tuesday: The GOP would very much like to know what you think about how President Trump is doing, and they’ve created this survey asking your opinion. Be specific and tell them what’s on your mind!

Thursday: The White House comments line is open again (202-456-1111). Call the and let them know what you think about something, whether it’s the ACA, the right of trans people to use bathrooms that correspond with the gender identity, or the administration’s aggressive tactics against immigrants.

Friday: Set your sights on your state capitol to save the ACA. Right now some of the most important voices calling to save it are from governors. Here in liberal as hell Vermont we have a Republican governor who is very much pro-ACA. Call your governor’s office and let them know that you support the ACA, and remember, even if you have insurance through your employer, the ACA makes it standard that all insurance cover contraception and women’s health care, makes lifetime limits on services and exempting people on the basis of pre-existing conditions illegal. It makes health care better for pretty much everyone. Call your governor and let them know how you feel, thanking them for sticking up for the ACA and encouraging them to continue doing so, or asking that they reconsider their stance.

Saturday: Subscribe to Civics 101 from New Hampshire Public Radio. It’s a great refresher course in civics issues that you may not remember from high school.

Sunday: Buy a Sunday paper of your choosing and spend some serious time with it, and not just on articles about politics. The rest of the world is still out there, spinning around, and apparently there’s a new continent, seven new potentially Earth-like planets, and in Canada at least, Subway sandwiches of the chicken variety contain less chicken DNA than you’d expect.