The beet burger at 61 Local is the work of veggie mastermind, Lukas Volger. Photo: Local 61

If you eat animal protein, there’s generally little reason (if any) to opt for a veggie burger instead of a luscious patty of ground beef. That said, veggie burgers can be delicious in their own right, if you know where to go, and from David Chang’s so-meaty-it-bleeds veggie burger, to Superiority Burger in the East Village which New York Times food critic Pete Wells referred to as “Shake Shack for vegetarians,” they’re really having a moment. (Cara Nicoletti, a butcher at Foster Sundry in Bushwick just did a video for Vice Munchies on how to make them at home, if you’d prefer to stay in for your veggie fix.)

For the most part, these burgers are best considered as unique food items. A chicken sandwich or a falafel are not the same as a burger, and you wouldn’t hold their lack of beefy heft against them. Same here. We picked five of our favorite veggie burgers in Brooklyn–these sandwiches can stand their own, we promise!

For the beet lover: 61 Local

In Cobble Hill, 61 Local serves up local foods and good vibes. The restaurant’s menu features a delicious and earthy beet burger made with chef Lukas Volger’s special blend. (Volger, a former employee and now the owner of the brand Made by Lukas, developed the recipe while working at 61 Local.) The patty is topped with pickled red onions, miso “mayo,” baby greens and ketchup and served on a ciabatta roll.

For the milkshake drinker: Dutch Boy

Burgers and milkshakes go together like…fries and ketchup, peanut butter and jelly, pickle juice and whiskey shots. Dutch Boy in Crown Heights is as well known for its spiked milkshakes as it is its burgers and so we had to include them on this list. The veggie burger here is house-made and distinctly simple, but for two reasons we love it. One, it’s served with chipotle aioli, which delivers a heat-packed punch and two, you can (and should) wash it down with a root beer schnapps-spiked milkshake. 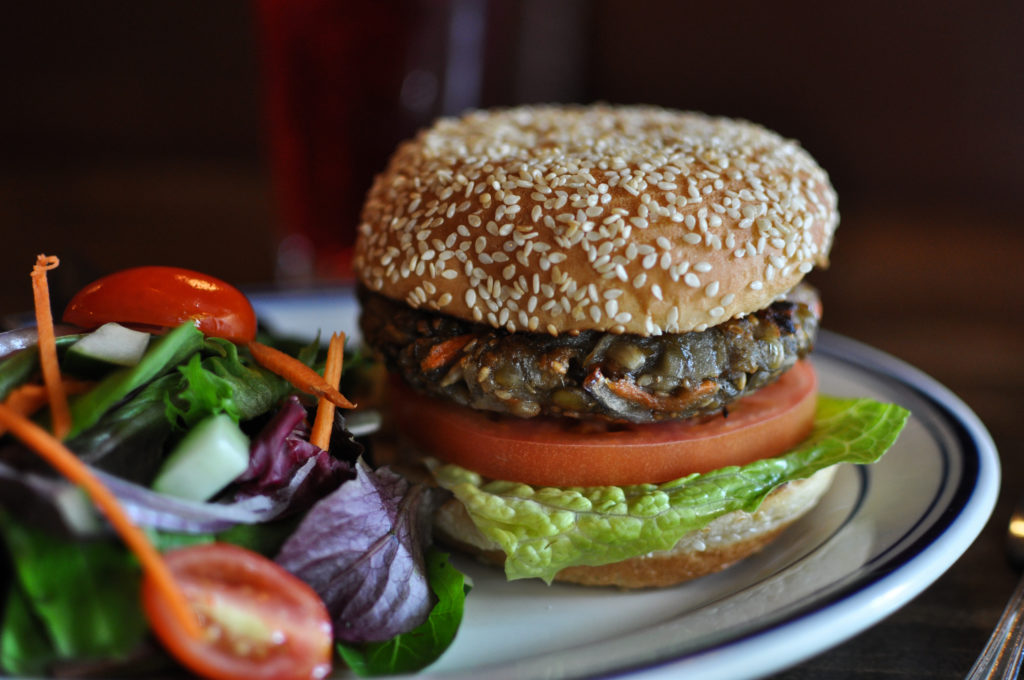 For the health freak: Building on Bond

Neighborhood coffee shop, bar and popular lunch and dinner spot Building on Bond is home to another of our favorite veggie burgers. The patty is made in-house with lentils, oats, sunflower seeds, sesame seeds, carrots, potatoes and red onions. It comes served on a sesame seed bun and topped with house-made red pepper relish. You’ll feel like you ate a salad or a grain bowl after taking one of these bad boys down, but you did it with your hands!

For the meat eater: DuMont Burger

DuMont has one of the juiciest beef burgers in North Brooklyn, and their veggie burger, while not juicy, is one of the most texturally “meaty” that we’ve found. The patty is made with a base of brown rice and wheat and then made luscious with the addition of zucchini, red peppers, sweet potato and pecans, which also add a nutty, unexpected funky flavor. Like the namesake DuMont burger, this one is also served on a grilled brioche bun. 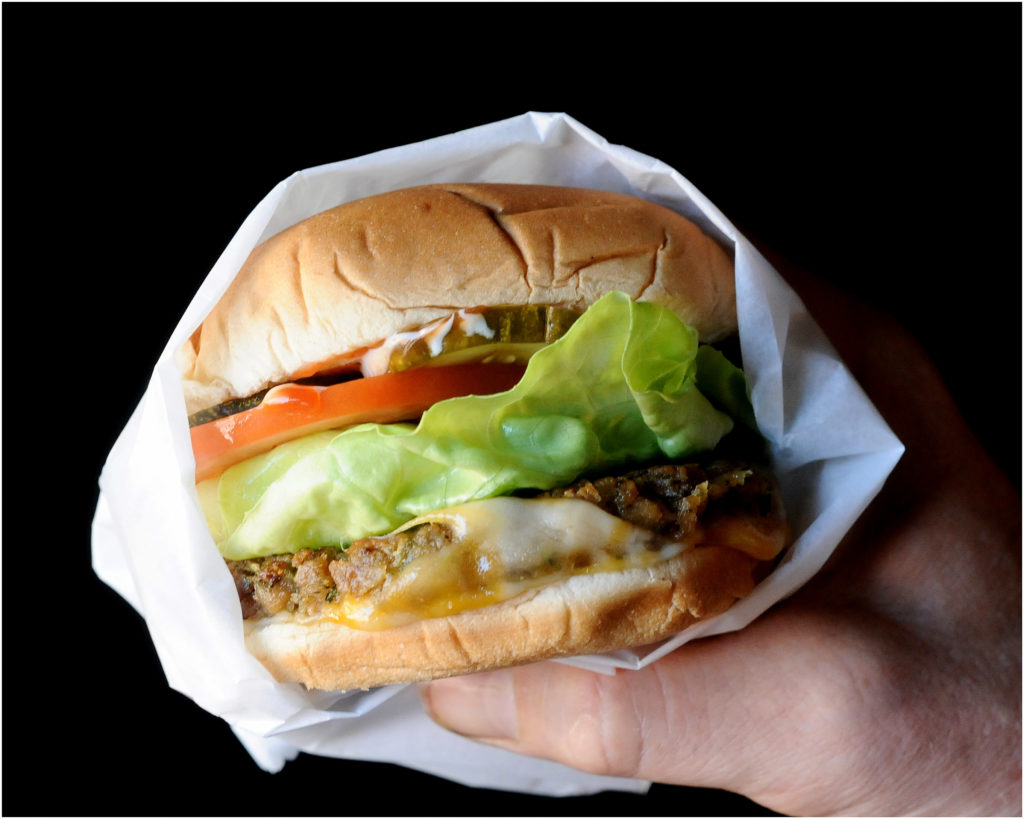 Unsurprisingly, the veggie burger at No. 7 Sub is totally nuts and completely delicious. Photo: No. 7

For broccoli heads: No. 7

The veggie burger patty from No. 7, as you might expect, is wacky like many of the sandwich combos this team is known for. It’s made from seitan, broccoli, dried shiitake mushrooms and nutritional yeast. Eating one is like a hippie umami dance party in your mouth. It’s also, un-surprisingly, called the Total Vegetarian Chaos & Destruction and comes topped with avocado, cheese, pickled beets, griddled onions and No. 7 steak sauce. At No. 7 in Fort Greene and No. 7 North in Greenpoint, the patty is served on a Caputo Bakery roll. At the No. 7 Sub location at Whole Foods Williamsburg, it’s served on a smaller hamburger bun. And, if you’re rolling with vegetarians who eschew burgers of all kinds, No. 7 tends to have tons of equally nuts, vegetable-heavy meat-free options.